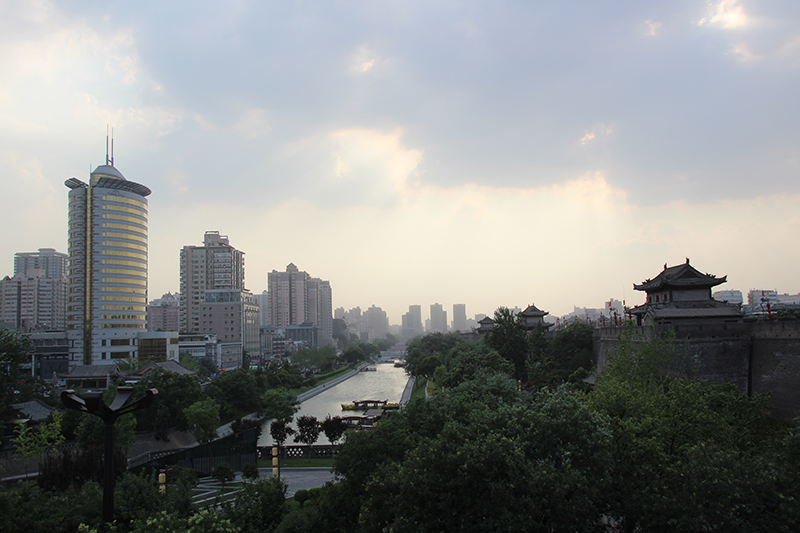 As the ancient capital of China, Xi’an is a city steeped in history and culture, offering a glimpse into its rich imperial past at every turn.

Located in the Shaanxi province in central China, Xi’an is considered the birthplace of the Chinese nation and civilisation, for it is here that 13 dynasties ruled over a period of more than a thousand years. 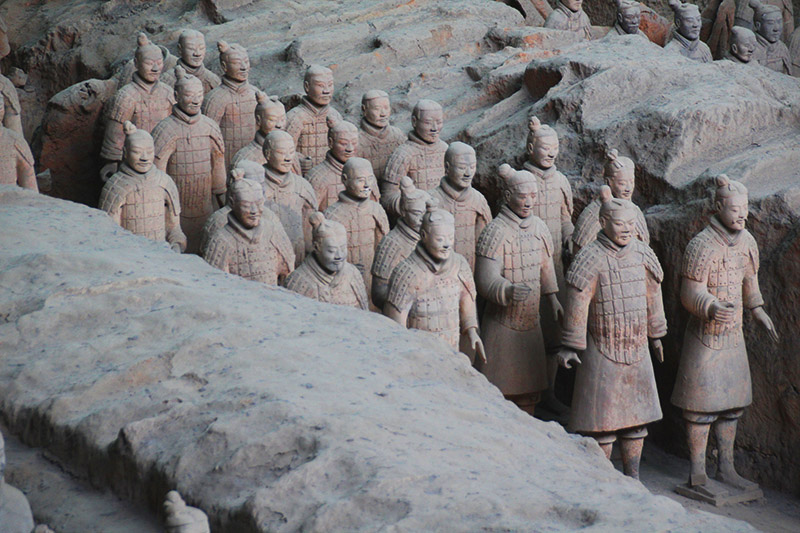 Once called Chang’an, meaning “eternal peace”, Xi’an, meaning “Western peace”, was where the Silk Road started, linking China to the west and opening it up to the rest of the world, establishing it as one of the world’s four ancient capitals alongside Athens, Rome and Cairo. 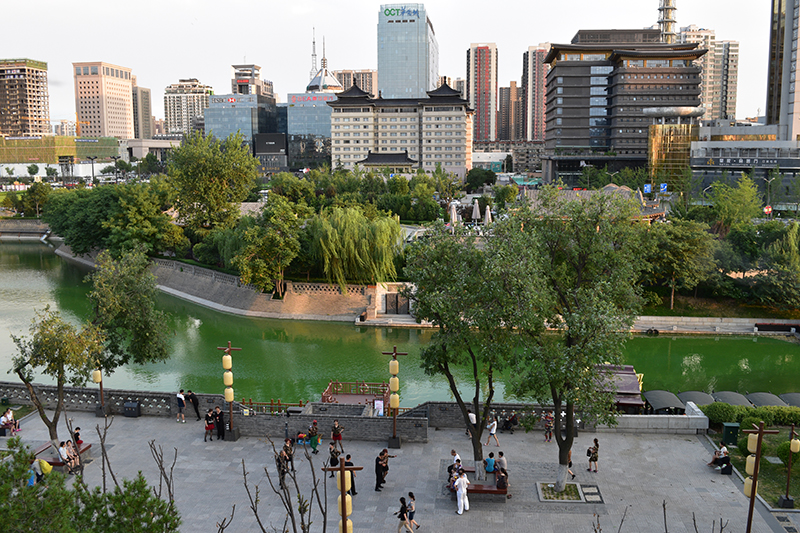 Today, Xi’an is a fascinating destination, which offers travellers a wealth of authentic and culturally immersive experiences against a backdrop of awe-inspiring historical landmarks.

With 2017 officially named the China Australia Year of Tourism, and a very special welcoming ceremony taking part in Xi’an for Australian visitors on 14 September, there has never been a better time to visit Xi’an. 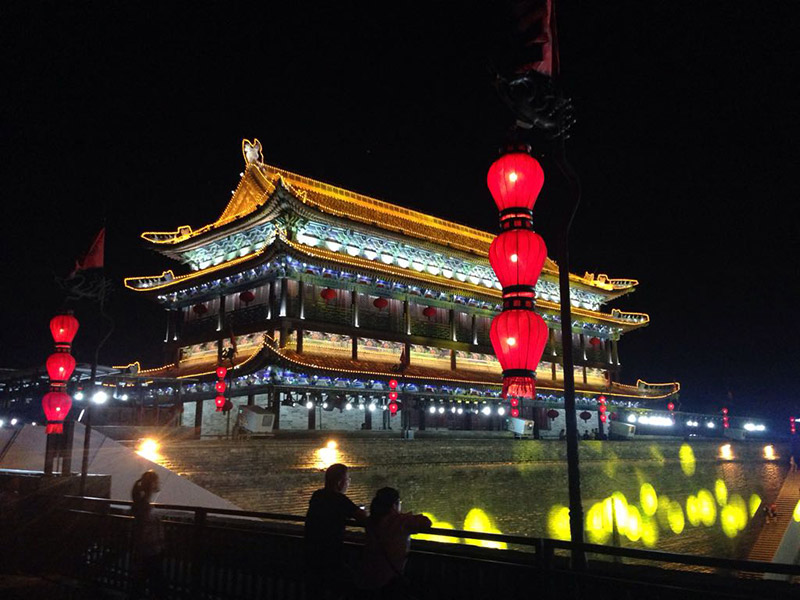 Read on to find out how you can be a part of Chang’an Impression: A Tang Dynasty Grand Welcoming Ceremony alongside the top ten not-to-be-missed Xi’an experiences.

1. Marvel at the Terracotta Warriors 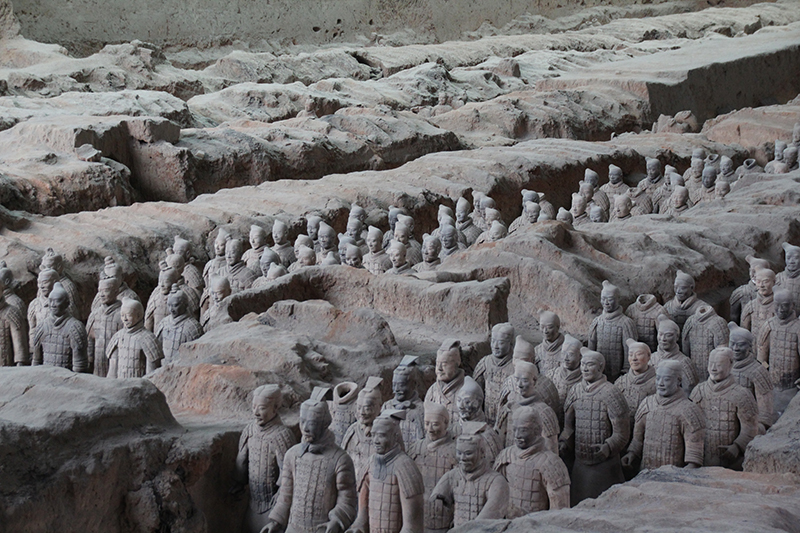 No trip to Xi’an would be complete without visiting the famous Terracotta Warriors. Located in Lintong, just under an hour’s drive from Xi’an, the Terracotta Army is one of the most significant archaeological discoveries of our time. Discovered in 1974, the army consists of more than 8,000 life-sized warrior statues, as well as chariots and horses, built around 210 B.C. to guard the tomb of China’s First Emperor Qin Shi Huang, and join and protect him in the afterlife. Today, these incredible, highly detailed statues are still being excavated and restored to their former glory, piece by piece, a painstakingly long and detailed task, especially given that no two are exactly alike. 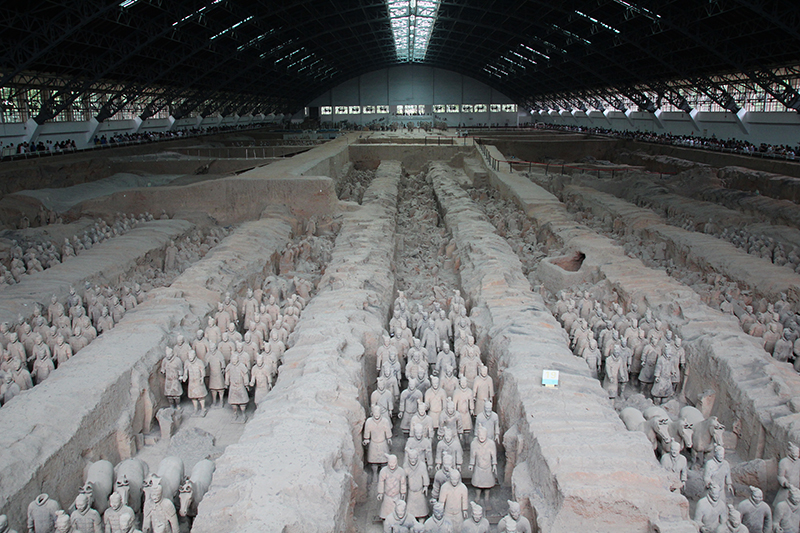 The mausoleum of Emperor Qin Shi Huang is located nearby in Lishan Gardens, and shuttle buses run regularly between the warriors and the mausoleum site.
Stop by the Xi’an Art, Ceramic and Lacquer Ware Factory to pick up an exceptionally recreated terracotta warrior statuette as a souvenir.

2. Relax at Huaqing Palace and Pool 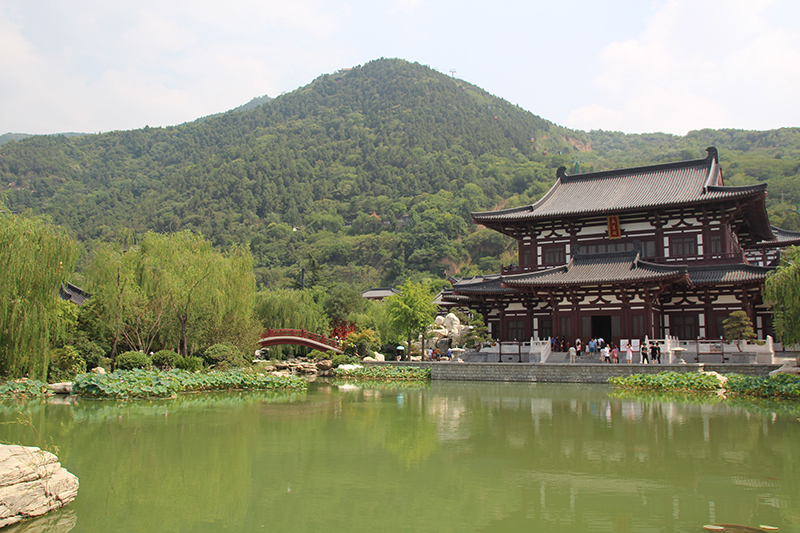 While you’re in the Lintong area, a stop at this enchanting hot springs site at the foot of Mount Li is highly recommended. Combining history, culture and nature, Huaqing Palace features stunning gardens, a museum, wellness spa, natural hot spring pools, and an on-site restaurant and hotel.
After exploring the palace and grounds, head up to the hot pools for a relaxing soak in natural, thermal waters with a temperature of 43 degrees. There’s also an on-site spa offering a range of traditional treatments and therapies, as well as a relaxation lounge where you can help yourself to complimentary fruit, juice and tea.
Throughout history, the palace was home to four dynasties, including the Tang Dynasty, which was the last to reside here. 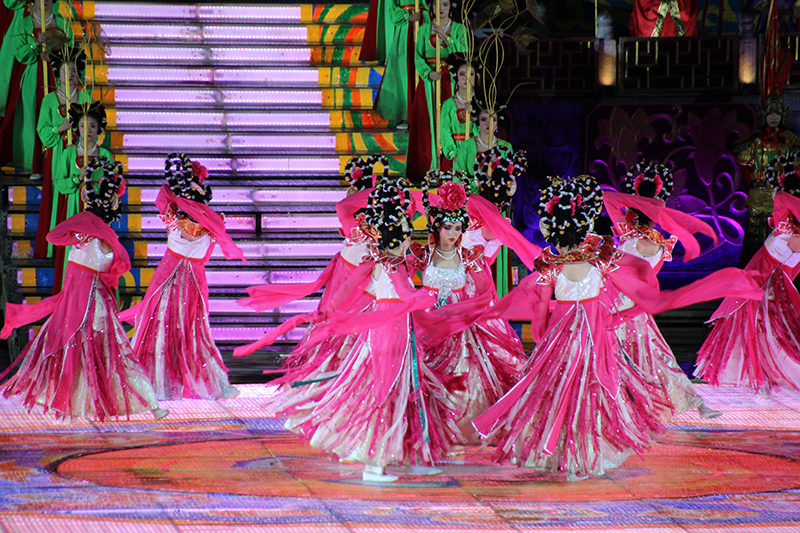 China’s most well-known tragic love story took place here between Tang Emperor Xuanzong and his beloved concubine, and is played out in a theatrical performance at Huaqing Pool every night. Performed against the magical backdrop of Mount Li, A Song of Everlasting Sorrow is a spectacular showcase of costumes, dance, song and mind-blowing special effects and is an absolute must-see. 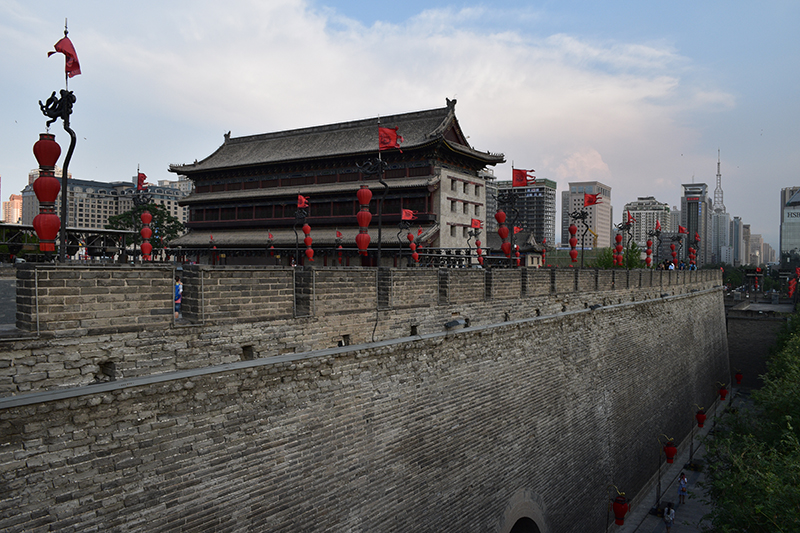 This highly fortified wall is the largest, most intact and well preserved city wall in the world. Historical records indicate that building originally commenced in 582 AD by the Sui Dynasty to protect the city, and was then continued to be expanded on by the Tang and Ming Dynasties, with building completed 647 years ago. 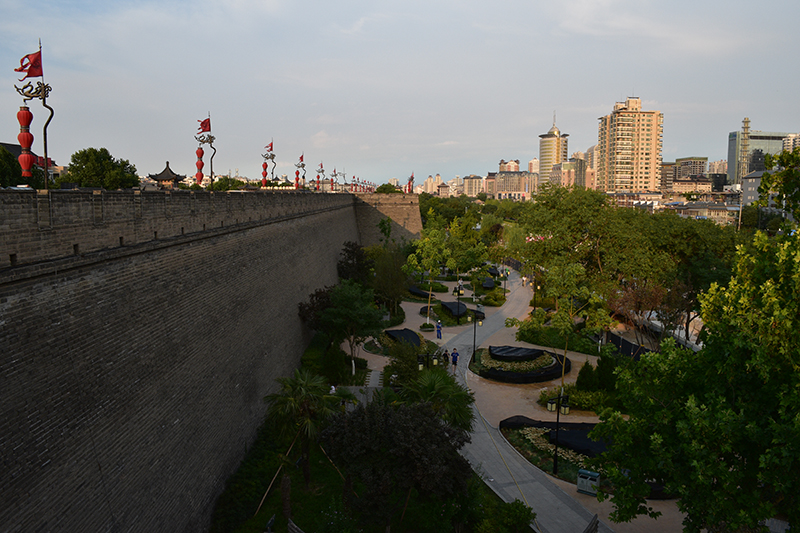 It is built in a rectangular shape, has two towers, and four gates facing north, east, south and west, and is surrounded by a moat and a public park. Nearby, you can also visit the Stele Forest Museum which boasts an impressive collection of 11,000 relics from past dynasties. 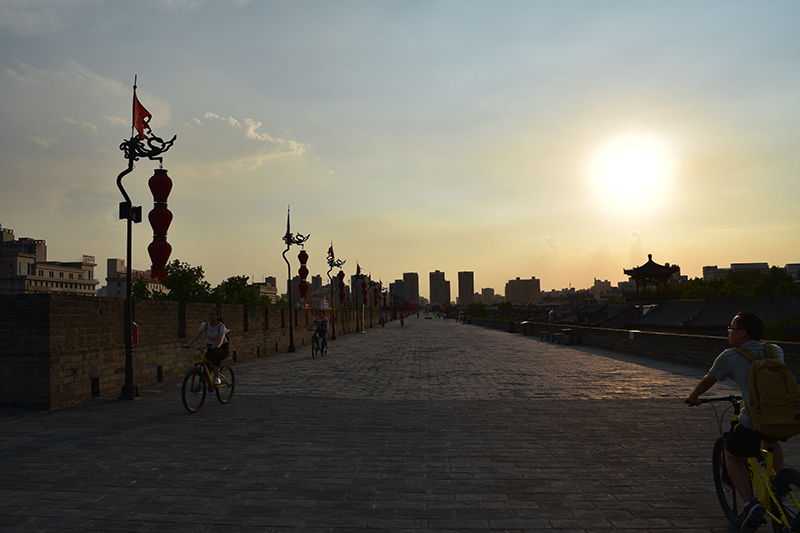 Just under 14 kilometres long, and 12 metres high, exploring the wall is best done by bike, which can be hired for a small fee at various points along the wall. It’ll take you about two hours for a complete circumnavigation and you’ll want to take your time to enjoy the vast views of the city from all angles and take plenty of photos as you observe the contrast between the inner and outer parts of the city. Sunset is a wonderful time of day to go, and at night, the views are truly spectacular with the two towers lit up in an array of colours. 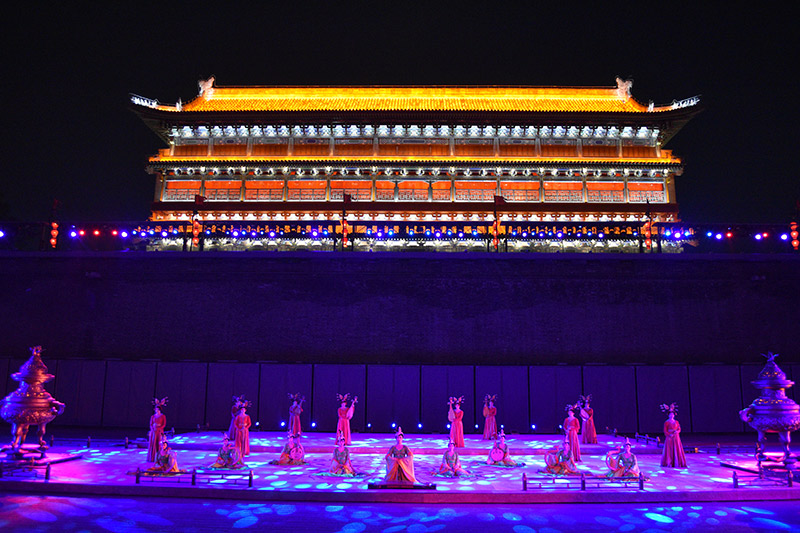 At the Xi’an City Wall is also where the spectacular performance Chang’an Impression: A Tang Dynasty Grand Welcoming Ceremony takes place, and is not to be missed.The spectacular performance commences just outside the South Gate where you are greeted by performers in traditional Tang Dynasty costume, who then lead you through the gate and inside the city wall for a spectacular, visually stunning showcase of the ancient city’s dynamic history. 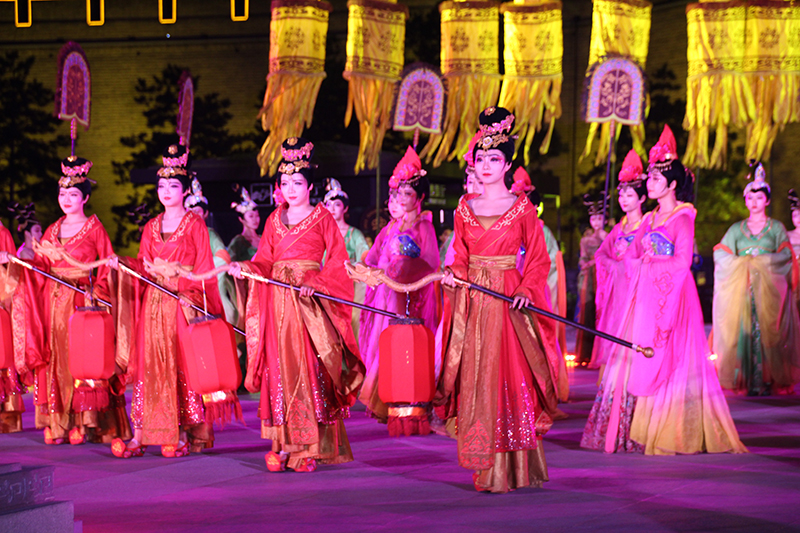 Previously reserved exclusively for visiting dignitaries and esteemed VIPs, the ceremony is held for the public several times a week, with a very special performance taking place 14 September for 1,000 Australian guests, in celebration of the China Australia Year of Tourism. The invitation is open to all Australians so to find out about how you can take part in this once-in-a-lifetime experience, click here. 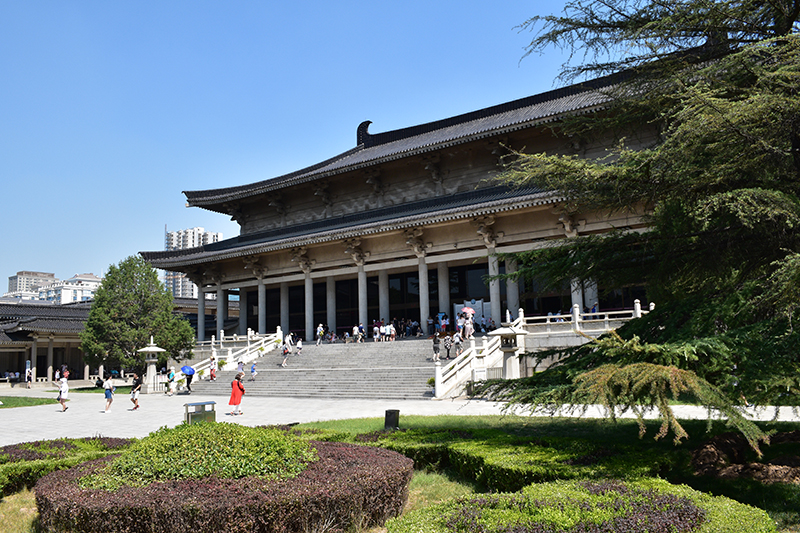 To gain a deeper understanding of Xi’an, and China, a visit to the Shaanxi Museum is a must. Home to more than 370,000 pieces of rare and cultural ancient artefacts, including murals from tombs of the Tang Dynasty discovered in the Shaanxi Province, this huge museum is divided into sections relating to the different dynasties, each one playing its part in the history and culture of Shaanxi Province. The museum itself is designed in traditional Tang Dynasty style architecture and is surrounded by beautiful gardens. 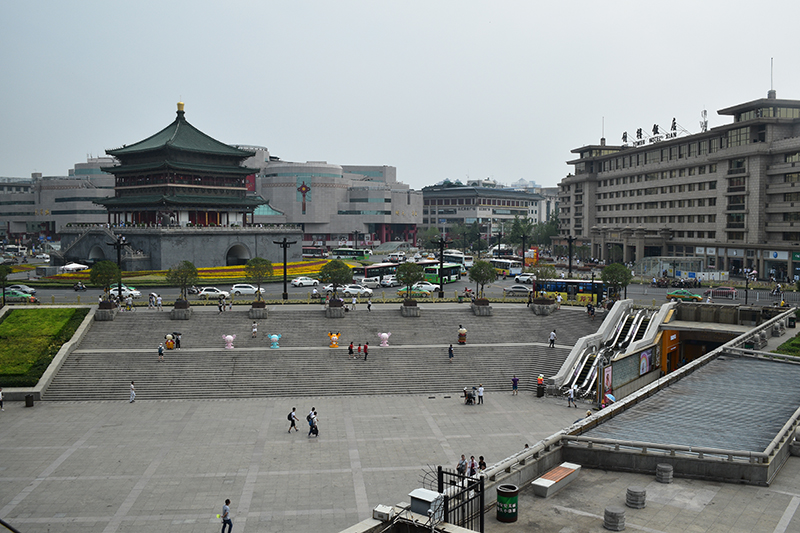 Situated in the downtown city centre, the Bell Tower and Drum Tower stand across from each other on opposite sides of Zhonggulou Square, and are a significant symbolic landmark of Xi’an. Built during the Hongwu Period (1368-1398), they are two of China’s greatest and most well-preserved structures of the Ming Dynasty, and hold great architectural and cultural importance. 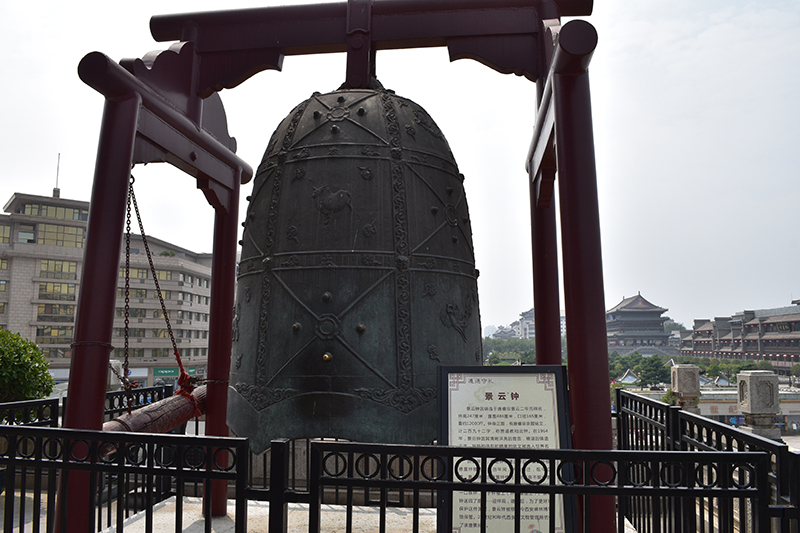 The Bell Tower is named after its enormous cast-iron bell, which chimes at sunrise to greet the start of a new day, while the Drum Tower houses a giant wooden drum that beats at sunset to mark the end of the day. This tradition has carried over from ancient times, when the bell was also used to alert the town to any danger. Today, visitors can climb to the top of the two towers and explore inside, with each one housing a collection of arts and artefacts from the city’s historic past, and offering sprawling views of bustling, modern-day Xi’an. 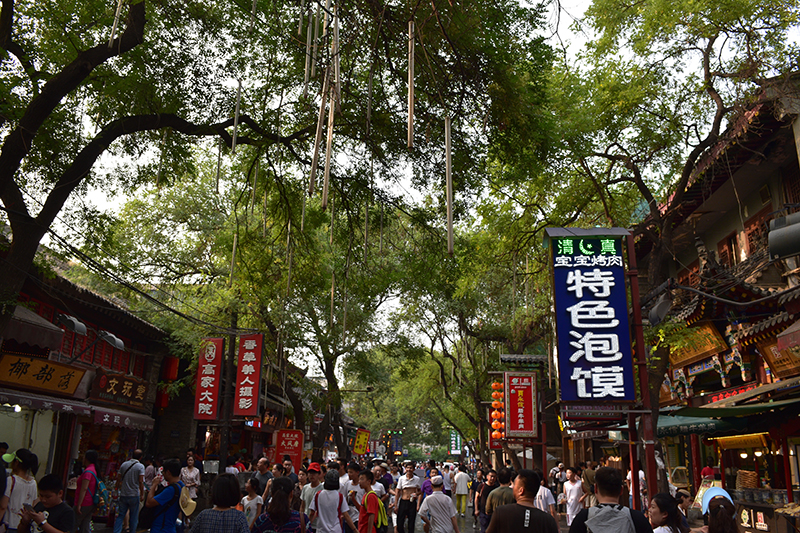 Bustling with energy and activity, Muslim Street is a popular tourist attraction yet authentically local too with all of the stalls, shops and restaurants here operated by Hui Muslims. This is an excellent place to try new foods, interact with locals and haggle for a bargain. Food stalls line all the way up the street, offering plenty of exotic fare cooked fresh right before you, as well as souvenir and gift shops selling jade jewellery, silk, and traditional arts and crafts. 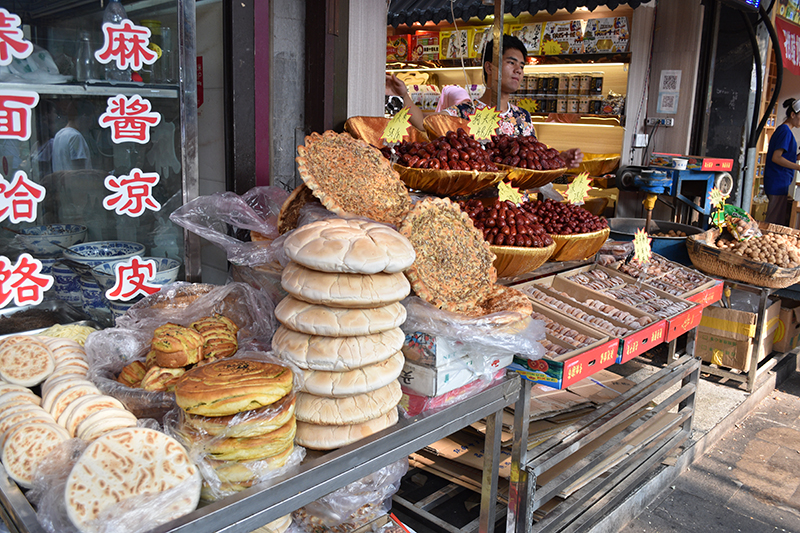 Nearby on Huajue Lane, you’ll find the Great Mosque which was built during the Tang Dynasty and is a beautiful representation of Islamic and Chinese culture coming together. You can also duck into Gao’s Grand Courtyard – a traditional Chinese mansion and courtyard that once belonged to an official of the Ming Dynasty. Today it features various exhibitions and a traditional shadow puppet play, performed every evening. 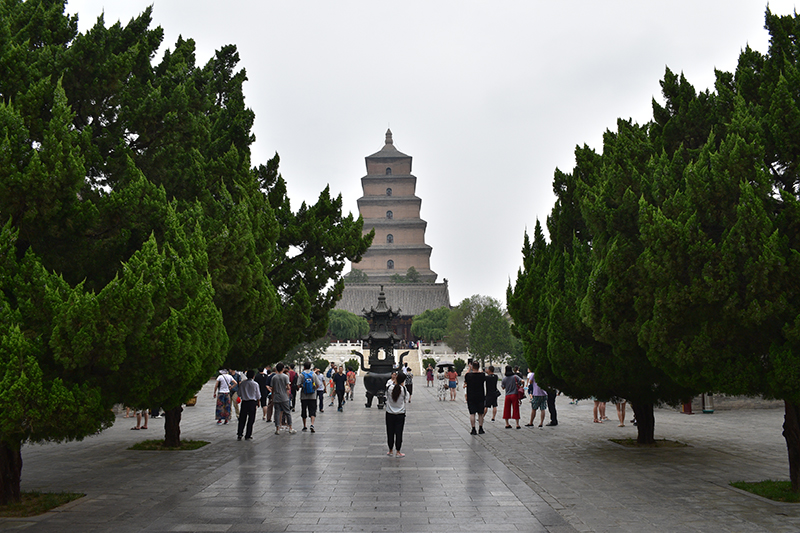 This significant architectural structure located in the city’s south, is a Buddhist pagoda and a symbol of ancient Xi’an, or Chang’an. Originally built during the Tang Dynasty, it went on to collapse five decades later, was re-built with an extra five stories added and then lost three after an earthquake hit in 1556. At seven stories high, it leans to the west and is a remarkable sight where both visitors and locals like to come to explore the surrounding Da Ci’en Temple complex where the pagoda resides, and pay their respects. There are beautiful gardens and plenty of exhibitions all throughout the complex, as well as a local art studio and gift shop, with proceeds going to the preservation of the pagoda and complex.
There is also a Small Wild Goose Pagoda, located about one kilometre from the city, and is 13 stories high, despite its name. 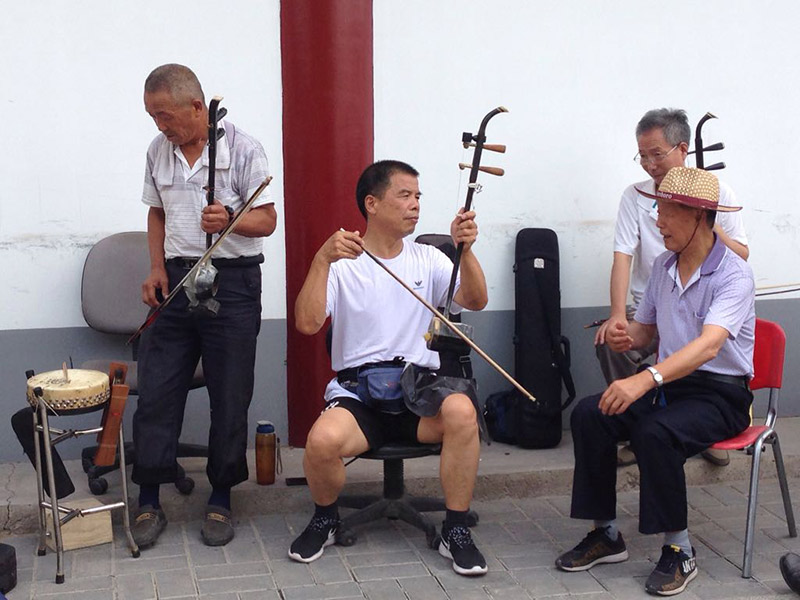 With a culture which so proudly celebrates its history and tradition at every corner, there are plenty of ways to immerse yourself in local Shaanxi culture in Xi’an.

Tang Bo Art Museum not only features a fascinating collection of traditional arts by some of China’s most famous artists throughout history, it also offers calligraphy and paper cutting workshops as well as traditional tea ceremonies. 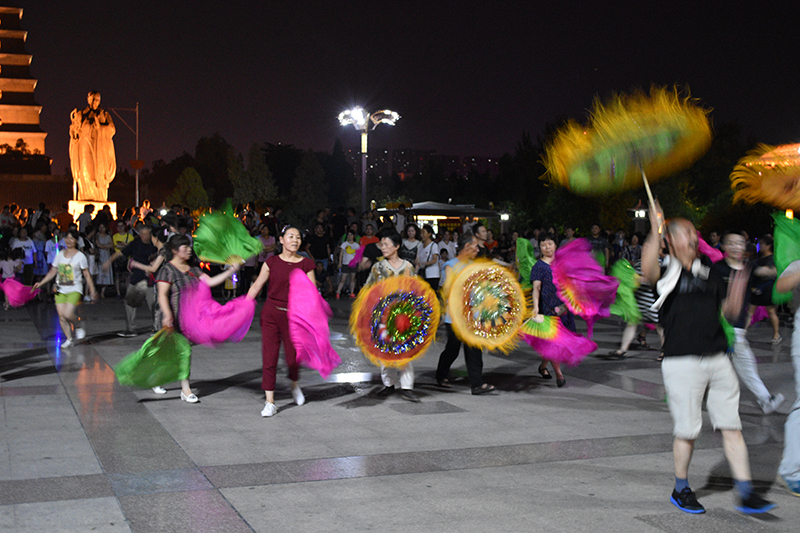 From ballroom dancing to traditional folk dancing, the locals sure love their dance, and you’ll often see people dancing in the street. In Dayanta North Square, near the sculpture of famous Buddhist monk Xuanzang, groups of people gather every evening to dance.
You’ll be more than welcome to join them or you can simply watch the action take place, with the Great Wild Goose Pagoda lit up in the neardistance providing a spectacular backdrop. 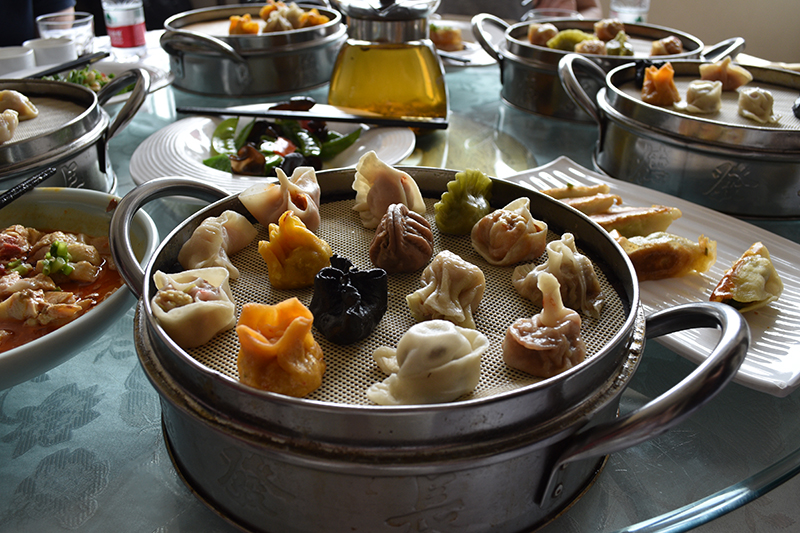 Chinese cuisine is world famous, and with its Islamic influences, the food of Xi’an is particularly distinctive.

Xi’anese especially love their noodles, and at First Noodle Under the Sun you can bet you’ll find just about any type of noodle there is, from buckwheat noodles to three-metre long noodles that don’t seem to have an end in sight! You can also try the Chinese hamburger, roujiamo, consisting of shredded beef or pork in between two pieces of round flatbread. This place is a hit with locals and visitors alike. 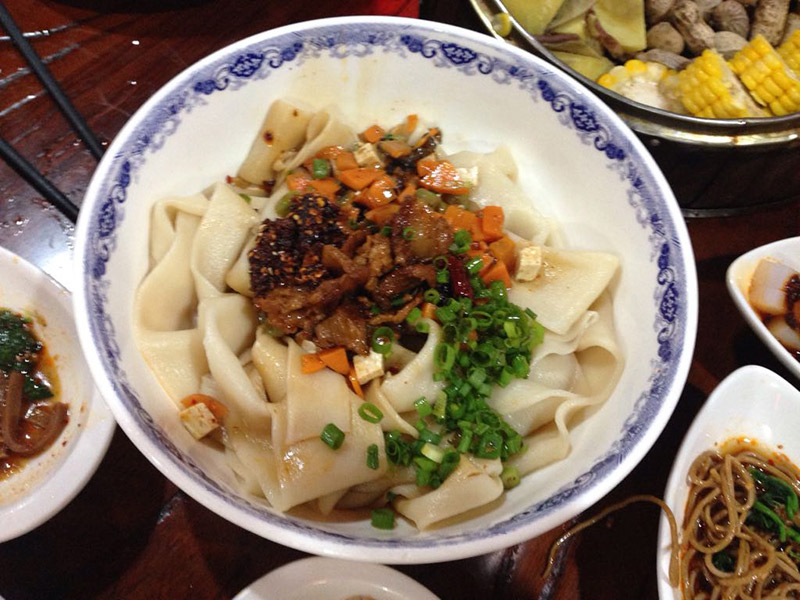 Dumplings are another popular specialty, and De Fa Chang near the Drum and Bell Towers is the most famous of them of all. With more than 300 types of dumplings in varying flavours, sizes, shapes and colours, a Dumpling Banquet is an absolute must. 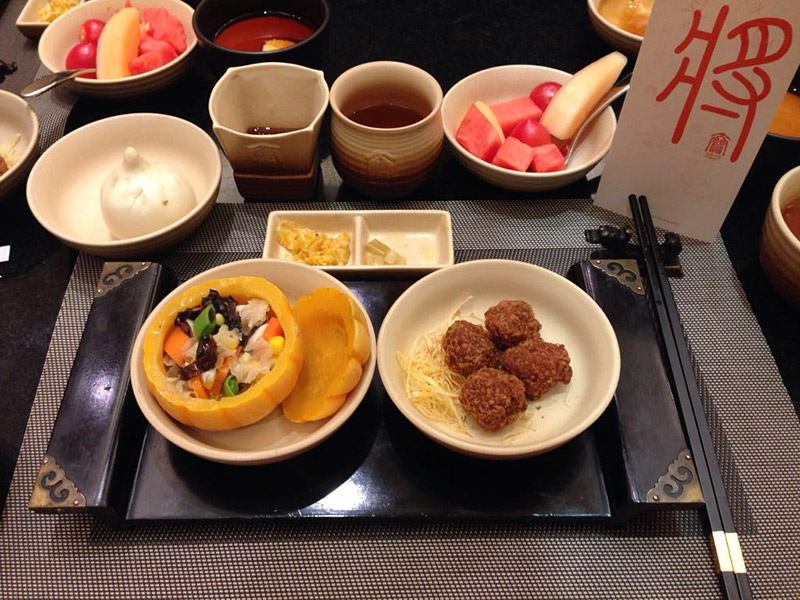 Paomo stew is a true Shaanxi speciality consisting of a beautifully flavoured broth cooked with either beef or lamb and shredded bits of flatbread, or mo. You actually tear the mo into bean-sized pieces yourself before they are cooked together with the meat and broth, giving them plenty of time to soak up all those wonderful flavours.

For something with a real novelty factor, try the Qin Restaurant of Reallove – a Tang Dynasty-themed restaurant where you can dress in traditional Tang costume and experience tea ceremonies and traditional cuisine and dining inspired by the Tang Dynasty. • 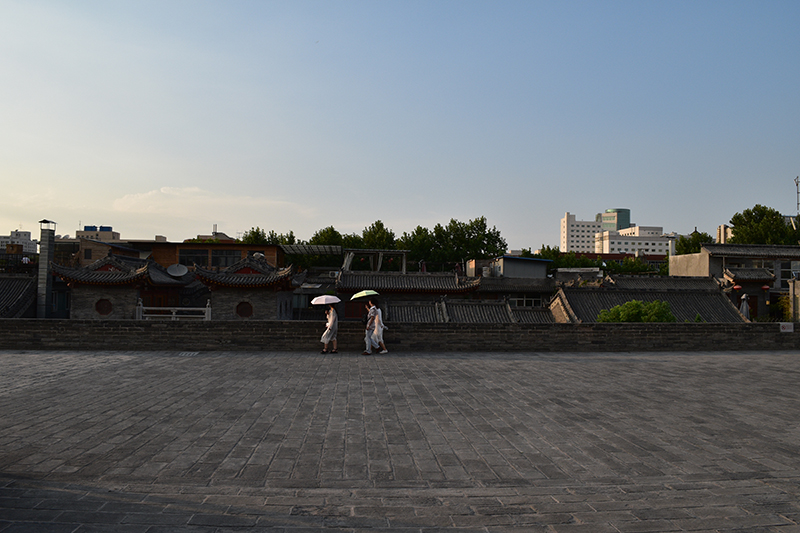 Getting there
Hainan Airlines, China’s only SKYTRAX five-star airline, flies daily from Sydney to Xi’an; hainanairlines.com

When to go
Like the rest of China, Xi’an gets four distinct seasons, and Spring (March-May) and Autumn (September-October) are considered the best times to visit when the temperatures are mild and the weather pleasant.

Where to stay
Wyndham Grand Xian South is a five-start hotel in the south of Xi’an; whghotels.cn