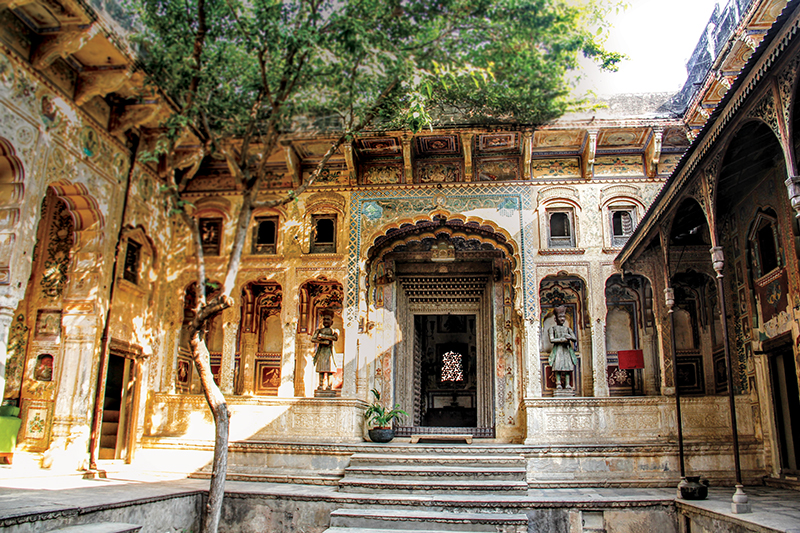 I have driven along low sand dunes, the colour of tawny leopard’s eyes and spiky Khejri trees, past camel carts and women with gauzy veils, passing through small towns that once belonged to a Rajput chieftain Rao Shekha. Chattris or cenotaphs built by families on the cremation sites of the wealthy and distinguished dot the landscape with domes and pillars. Shekhawati was an important point on the caravan route to coastal Gujarat and its merchants made money from a tax that they levied to protect traders from brigands. The entrepreneurs of this region amassed great fortunes until the rise of the British Empire and the introduction of railways when the caravan trade gradually declined and imported goods destroyed this trade.

Shekhawati is famous today for its rich embellished havelis or lavish mansions which were built between the 1750s and the 1930s and offer a cameo of the life and times of the people who lived here and the way they perceived the world. For many decades Shekhawati lay in a stupor with its wealth of havelis falling to ruin. It was in the 1970s that it was re-discovered by some foreign writers and historians like llay Copper and interest was generated in restoring these important pieces of heritage.

I base myself in a lovingly restored over-a-century old haveli called Vivaana in the tiny village of Churi-Ajitgarh. A couple from Delhi, Atul and Devna Khanna, embarked on this adventure of buying a decrepit haveli and carving out new spaces, restoring the frescoes and giving it a fresh lease of life as a boutique hotel. Rustic charm is the order of the day: regal peacocks strut into the entrance of the hotel nonchalantly where a bright orange Ambassador car announces the name of the hotel on its number plate, and the distant sound of loudspeakers blaring out Hindi film songs provides the sound track. 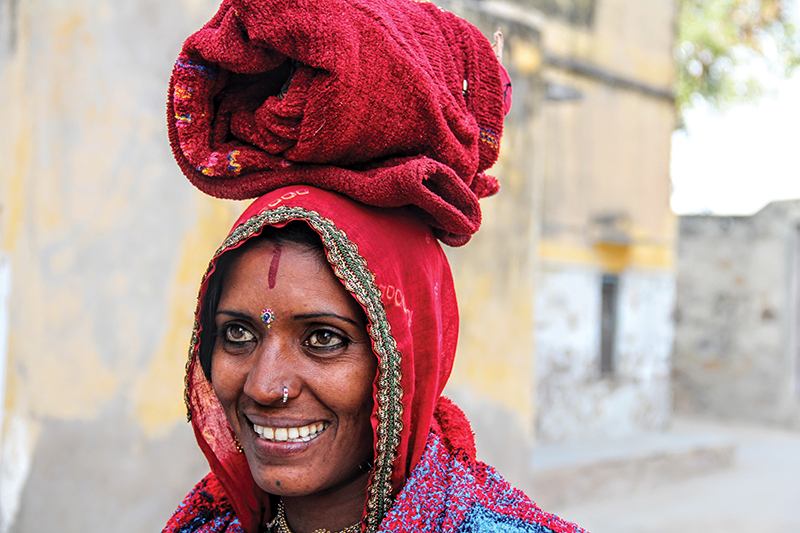 Over the next few days I explore this region with my Muslim guide Yusuf, from the neighbouring town of Nawalgarh. He tells me how the region owes everything to the exploits of the doughty Marwari community who despite the abject poverty of the region went out and amassed fortunes. Some of the most powerful business families of India have their roots here and today the owners of the havelis reads like a ‘Who’s who’ of India’s top industrial families – the Poddars, the Birlas, the Goenkas and the Morarkas.

“The earliest frescoes were rural scenes with farmers ploughing or busy village squares; later as people travelled they were exposed to new ideas and imagery like Art Deco and Gothic”, explains Yusuf. As I haveli-hop I discover frescoes that explore a wealth of themes – Gods and goddesses, great epics like the Ramayana or Mahabharata, and everyday life. Could it be that the rich palette of colours stemmed from a desire to brighten up the blank palette of the desert landscape? 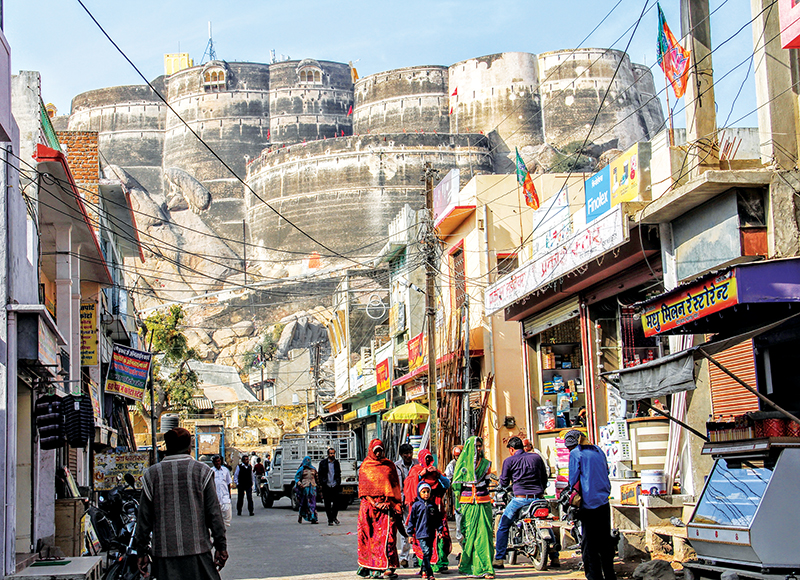 I ask Yusuf who painted these beauties. He responds, “They were simple people who belonged to the community of potters and were either painters or masons. The paints were derived from organic elements: roots, leaves, rocks and flowers.”

Local artists who had never seen a real car or train painted these scenes based on what their patrons told them or tales they had heard from rich merchants who travelled. They have painted trams, trains, even gramophones and Victorian women in flounced gowns with their parasols, in a Rajasthani palette of colours and style. The cast iron balcony in the Hanuman Prasad Nevatia Ki haveli in Fatehpur has images of Queen Victoria’s profile on the façade; in another haveli I see Corinthian Pilasters. There are glimpses of the sense of humour of the artists too – King George in local clothes and Lord Krishna with a gramophone instead of his flute.

“The wealth of the merchant was reflected by the number of courtyards, the number of galleries and the number of floors it had,” explains Yusuf.  Each doorway – its design, adornment and height gave hints as to the family’s economic standing. Every haveli had a Baithak, the formal reception room with mattresses on the floors and bolsters where the men of the house catch up on accounts and recover loans. The inner courtyard was the preserve of the women of the house. The inner courtyard was square in shape, and lined with many rooms, open living spaces, room for earthen pots for storing water, and a kitchen.

I drive through Mandawa which is the main town of these parts looking at veiled women in hot pink veils with mud pots on their heads, shops selling gargantuan rings of the local sweet Gewar and marigold yellow jalebis. The Mandawa Fort looms large over the town, today converted into a heritage hotel. I visit the decrepit Jujhunwalla Haveli where laundry dries on washing lines and a wily caretaker takes one hundred rupees to show me the treasures. He unlocks a room and as the lights flicker to life, I am astounded at the swirls of delicate frescoes that cover the walls and ceilings gilded with three kilos of real gold. I tear myself away from the frescoes briefly and stop by a local lac (a resinous secretion of an insect) bangle shop recommended by Yusuf. I sit on the floor next to an elderly woman as she twists a hot lac bangle onto my wrist and sets it in shape for me. 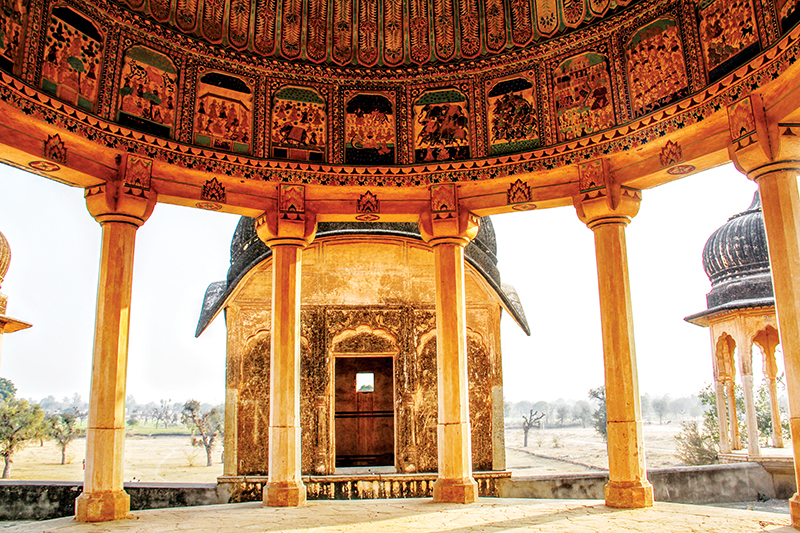 Over the next few days, I drive on bumpy roads exploring sleepy villages and neglected abodes. In Dundlod, men sit under the shelter of gigantic trees, playing cards and except for the few wandering cows, I have the havelis all to myself. The Dundlod Ramnath Goenka Haveli is a building dating back to 1750, now converted into a museum that offers an authentic re-creation of the life of those times. In the courtyard are cauldrons large enough to hide an adult, which used to store rice and lentils. I climb the stairs to the living quarters whose rooms showcase pieces of nostalgia: old anna coins under glass, voluminous garments worn by people who lived in the house, even the water of the holy River Ganges in a 100-year-old container. Sunlight filters through red and blue Belgian glass as the caretaker shows me the old style punkah – when cloth fans were operated by servants by pulling a pulley attached to the ceiling.

Nawalgarh, one of the biggest towns of Shekhawati was the cradle of very rich trading families. The Ramnath Podar Haveli Museum in Nawalgarh has tall gates with brass iron nails ‘that even elephants can’t break’. It was a school for 40 years and today it’s a museum with ten cultural galleries that explore different local themes like wedding dresses, blue pottery, and musical instruments. I love the sense of play in the fresco of two animals with one head: from the left it looks like a cow and from the right an elephant. The Morarka Haveli dating back to 1900 near the bustling Naya Bazaar has done something unique. The owner of this haveli hired an archeologist from the Archeological Survey of India (ASI) to restore it sensitively. It’s a unique haveli; it even has the painting of Jesus Christ on its western wall. What’s even more enjoyable is the bird’s eye view from its terrace – cenotaphs, pigeons fluttering near rooftops and the bustle of the market. At the nearby Bhagath Haveli, I meet the sprightly 85-year-old caretaker Ramnath, who dons his voluminous turban when he realises that he is going to be photographed. European-influenced frescoes are the speciality here including one of a woman playing an accordion and another of a bowler-hatted man in a coat carrying his dog on his shoulder.

On my last day in the region, I head to Fatehpur, a quaint hamlet, to see a haveli called Le Prince Nadine restored by a French artist. Nadine Le Prince got so enamored with the haveli that she bought it in 1999 and restored it to its original glory. The building dating back to 1802 has been turned into an art gallery-cum-cultural centre with art students in residence. The artist chose local fresco artists to rectify the damage and sourced natural dyes for the restoration. The women’s courtyard is painted from floor to ceiling with vibrant battle and hunting scenes.

Most of Shekhavati’s havelis that I have visited are occupied by caretakers who become de facto owners. Smoke from kitchen fires has blackened the walls. Small shops have mushroomed near the entrance of the havelis for measly rents. I see frescoes that lie hidden under layers of dust and grime or plastered with political or cinema posters; many havelis have been ruthlessly white washed or painted over by ignorant locals in their relentless march to modernity.

“So many havelis have been torn apart and their richly carved wood pillars and window glasses have been sold piece by piece to antique dealers”, bemoans Yusuf. “Before a fort, palace or haveli can be assessed for damage or conservation, many have to first resolve the issue of ownership,” explains Yusuf. He narrates stories of many families where brothers are divided about how to look after their havelis and family feuds which have resulted in the destruction of many pieces of history.

Though the havelis are today pale reflections of the time when they accommodated the large bustling households of the merchant families, they still remain a fascinating testament to the changing times in which they were created. And I fear that unless they are sensitively retored and saved from destruction, these social commentaries will soon crumble to desert dust. •

Air India flies a triangular route between Delhi, Sydney and Melbourne touching down in Sydney first four days a week, and flying into Melbourne first on the other three days. airindia.com
Etihad flies to Jaipur via Abu Dhabi. Or fly to Delhi and drive to Shekhawati (258kms from Delhi via Narnaul road). etihad.com

When to go
Travel in the cooler months of October to March.

Where to stay
Vivaana, a 100-year-old twin haveli has been lovingly restored into a heritage hotel with comfortable rooms and good food. The hotel is in Churi-Ajitgarh Village (10km from Mandawa). The hotel helps in logistics and trips to discover the havelis and you can also hire bicycles to wander around the village. vivaana.com