Mandurah was once dubbed ‘God’s waiting room’. It’s where a lot of older people would retire to; Western Australia’s version of Florida. It was also an easy and affordable getaway for my parents to organise when I was a kid. There wasn’t much to do there, so entertaining us meant letting us run around the caravan park we were staying in.

How times have changed. From this spot, I could now see several new restaurants, a new marina that was home to a hotel and apartments and multi-million-dollar homes lining a new suburb built on canals. Even the foreshore itself had received a significant facelift.

Mandurah has grown up and is still maturing. There are still building sites working towards the finished product. People moving there now are looking at starting new lives, not ending them. The facilities and infrastructure are being developed or planned to accommodate them. 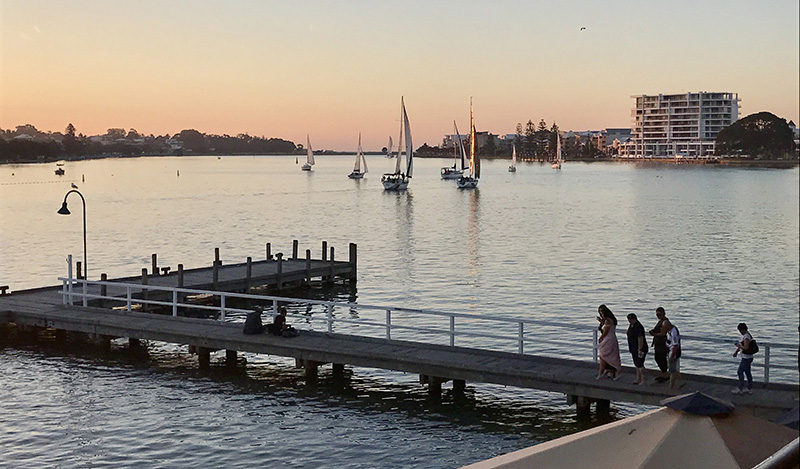 Back then, would-be-tourists were not missing out on much. But that was then. Over a three-month period, I managed to fit in three very different visits to the new Mandurah and the Peel region that it belongs to.

The catalyst behind the boys’ weekend was a game of golf. A group of 20 of us, who have known each other since we were teenagers, now play golf infrequently – and generally badly. It’s a very social affair, where handicaps for most are a lack of ability for the sport.

The Mandurah trip has recently become an annual event. The Peel region has some terrific golf courses. We’ve played the Links course at Port Kennedy, where the guys who could manage the wind coming off the ocean dominated. 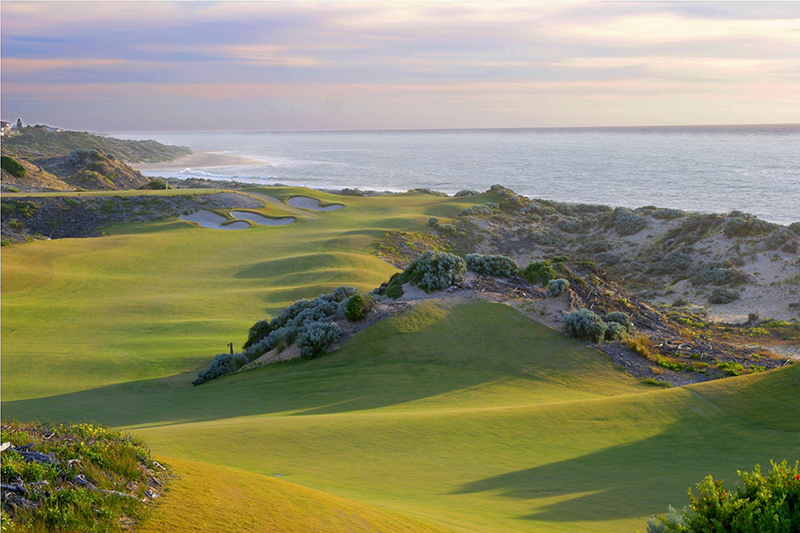 This time, it was Meadow Springs. While the course was too good for me, it was still an enjoyable day on the fairways… ok, in the rough. The course is spectacular. If I wasn’t playing golf I could have enjoyed the walk through the bushlands and among the massive trees that line the fairways. Some locals were doing just that.

Next year, we’re planning on tackling The Cut. It’s ranked number one in the state and among the top 25 courses in the country. I’ll need a lesson or three before I attempt that one though.

Our group took the opportunity to get an early peek, albeit from afar at the adjacent Pyramids Restaurant; a full-service à la carte venue. The accommodation offering has also changed a bit over the years. We stayed at the very modern and comfortable Dolphin Quay Apartment Hotel. Its two-bedroom apartments were perfect; even more so for a longer stay. Downstairs were a couple of different restaurants, but the Oceanic Bar & Grill with a simple, yet mostly classic menu, was popular with our group. 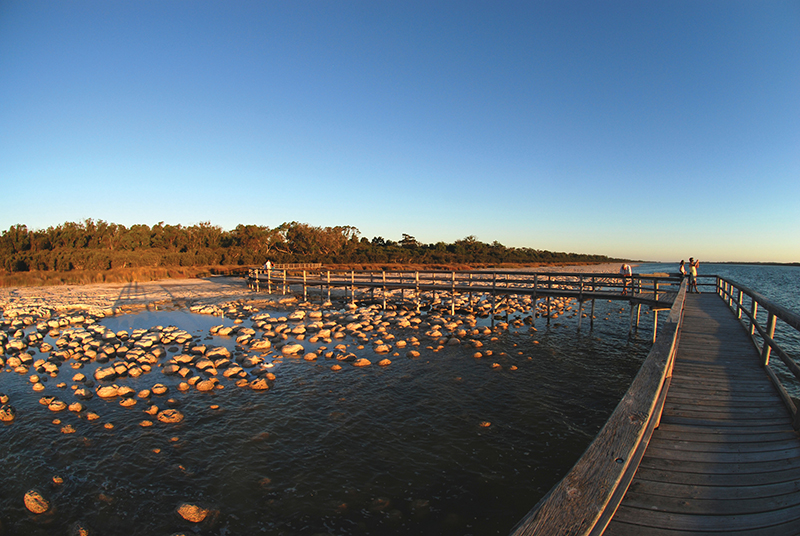 I threw a couple of brochures on the table showing activities such as cycling the Munda Biddi Trail, canoeing the Murray River and climbing high above the ground on a Tree Adventure in Dwellingup. The next “golf” trip is going to be extended by a day, or two.

Mandurah is close enough to visit for a weekend, or for a day trip from Perth, even with kids in the back of the car.

This proximity allowed me to book a Mandurah Dolphin Tours cruise around the canals. I’d participated in one of these tours a year earlier, but this one was a little different. The previous tour ran during the day and was set up to showcase the beautiful homes that have been built along the Mandurah canals. I couldn’t help but imagine myself sitting on nearly every back porch, looking out for the resident dolphins and waving at those using the waterways for leisure, or transport. And as many of the owners were overseas on business or pleasure anyway, would they really mind if I did? 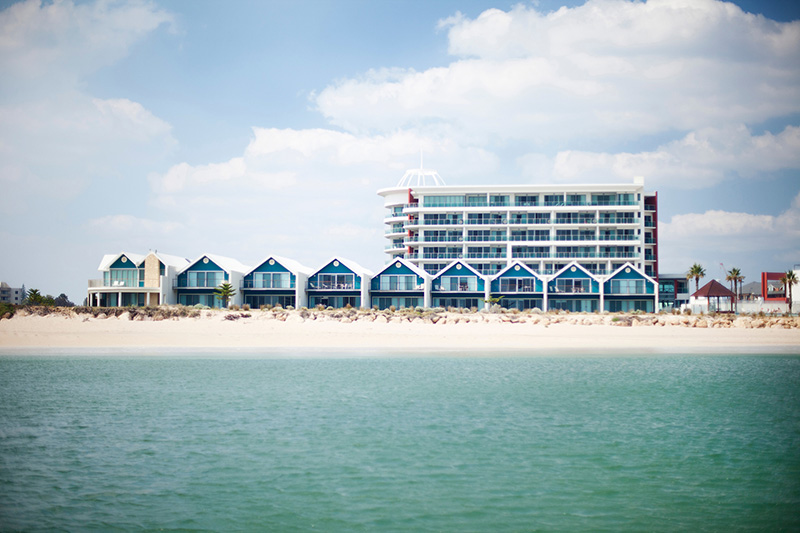 This latest cruise, however, left at night. The kids were a bit wired because we’d arrived in Mandurah early and had time to stop at Nino’s for a fish and chips dinner. The Dolphin Quay Marina wasn’t there when I was a kid, although fish and chips on the foreshore have always been a popular offering.

Before the cruise we paid a visit to the Peel Zoo and the Lake Clifton Thrombolites. Visiting the latter took us about 30 minutes out of our way, but it was worth it – and was fun listening to the kids trying to pronounce them. This detour not only let us stretch our legs for an hour or so, but provided a look at the bizarre limestone-like structures that are growing in the water. These things are alive, which freaked the youngsters out a little. Because of that, they were more interested in viewing them from the boardwalk than from in the water.

I’ve lost count of the number of times I have visited Mandurah and extended my visits into other areas of the Peel region. But the Zoo had never made it on to my itinerary. I’m disappointed it has taken so long. The Zoo is family owned and run. There were several kids running around helping out. This isn’t a zoo in the vein of Perth Zoo. There are no elephants, rhino, lions, or the like. But you’ll find koalas, emus and kangaroos. You can get close to some of them in the petting area, or by taking a stroll through the walk-in aviary. 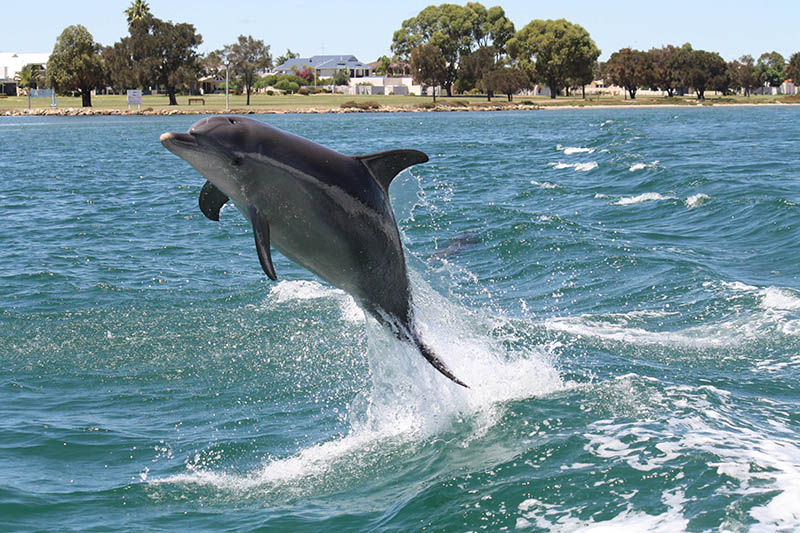 The Tasmanian devil appeared the most popular. Most of the animals could be seen in the enclosures, which was enough for the kids to give the venue a big tick.

They were a bit nervous when going to the toilet though, as the resident peacocks were perched above the toilet door, putting to test the urgency ‘to go’ of everyone in our party.

Back at the al fresco dining area at the Marina, where our cruise was leaving from, the kids could just get a glimpse of the glow from the Christmas lights that were coming from the canals. That was the major reason for booking this cruise.

Each year, from early December, a couple of cruise companies run tours through the canals after dark to showcase the Christmas lights on display. The local home owners go out of their way to light up their mansion. It’s almost like a competition. It’s certainly a competition to get a spot on a boat, so make sure you book your seats early.

The cruise goes for just over an hour. Again, it was difficult to focus solely on the lights and blow-up Santas. These houses looked a lot different at night than they did when I was on the same tour during daylight. But they were no less impressive. It wasn’t hard to imagine myself as the owner of each of the dwellings and the water toys parked out front of many of them.

I was looking for something a little different for date night and the Hotham Valley Railway Restaurant Train seemed to fit the bill. It runs from Dwellingup Station every Saturday night. This is an actual locomotive train, well maintained, serviced and run by the loving volunteers. They also provide opportunities to ride trains on other days. 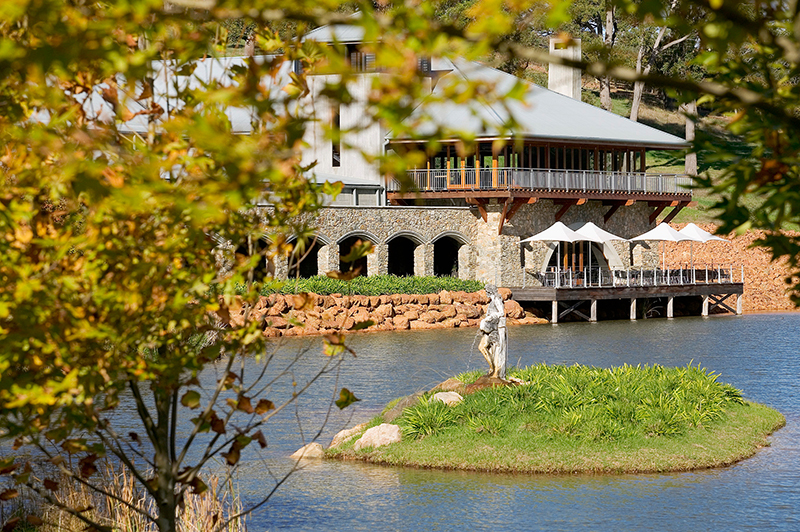 Mandurah’s dining options have grown significantly in recent years. There was a time when all you could get to satisfy your hunger was a pie, chicken from Red Rooster, or fish and chips.

Among those who have discovered how liveable Mandurah is are chefs from Perth and interstate. Now, there are venues such as Silk Thai and Warung Ade Indonesian Restaurant offering international fare.

Seafood is still on the menu and Redmanna Waterfront Restaurant and Oyster Bar do it as well as anyone. Flics Kitchen, DPM Café and the well-known Millbrook Winery, in Jarrahdale are also worth a try. 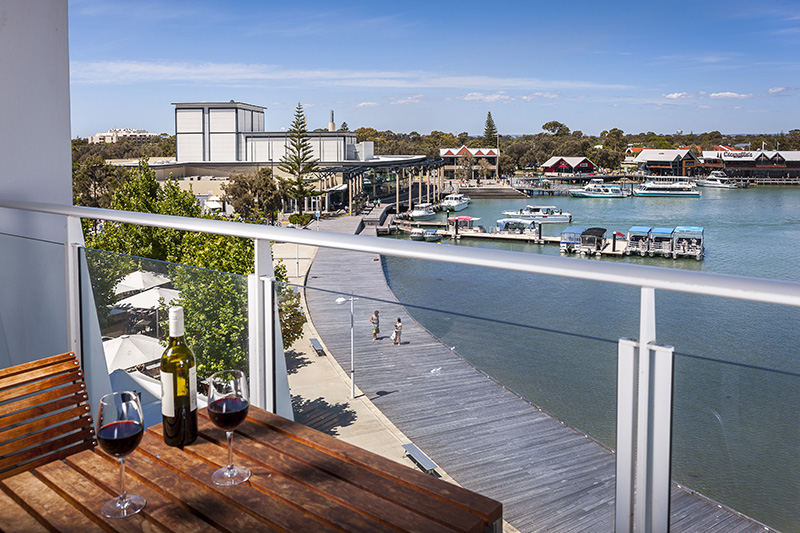 The menu on board the train is very different to those; very traditional. We were served pumpkin soup, fish, roast beef, apple pie and a cheese plate, finished with tea or coffee.

As we drove back to Perth, joining cars on the freeway that were making use of the bypass, we wished we were able to stay the night. •

Mandurah is less than an hour’s drive south of Perth, located on the coast. Take the freeway south and get off at Mandjoogoordap Road. Trains and buses also operate between the two cities. transperth.wa.gov.au

Getting Around
Buses operate around Mandurah, but if you want to explore the Peel region extensively you’re better off hiring a car. There are some tour companies that will help you explore certain parts of the region.

When to go
The Peel Region can be visited any time of the year. Being on the coast, it’s spectacular in spring and in summer. But during winter, the scenery is amazing. You can find something to do all year around.

Where to stay
Like everything else in the Peel region, the accommodation options throughout have improved. There are B&Bs, caravan parks and camping sites, as well as known brands such as Seashells, Quest and the Sebel.
• dolphinquayapartments.com.au
• accorhotels.com (Sebel)
• seashells.com.au/resorts/mandurah
• questapartments.com.au
• For something a little different and a lot of fun, consider a houseboat. No skipper ticket is required. The boats accommodate up to 10 people. houseboatsmandurah.com.au

Where to eat and drink
• Redmanna Waterfront Restaurant has the best location in Mandurah. You can sit by the window for hours and watch the traffic go by on the water of Mandjar Bay. redmanna.com.au
• The Oyster Bar offers oysters chilled and grilled – nine different ways. It’s also a waterfront wine bar, with a great range of beer, wine and spirits. oysterbar.com.au/mandurah
• Terrific Thai food. Full stop! silkthai.com.au
• Mandurah has stepped up with the Oceanic Bar & Grill. You can sit overlooking the Dolphin Quay Marina and enjoy a beer and something from the modern Australian menu. oceanicbargrill.com.au• Felicity Evans is gaining a following at Flics Kitchen because she is clearly having fun in her kitchen. This is a great place to sit with friends and enjoy some share plates. flicskitchen.com

What to do
• Golf – As well as Meadow Springs and The Cut there are courses at Mandurah Country Club, Waroona, Boddington and Pinjarra. visitpeel.com.au
• Hotham Valley Railway: hothamvalleyrailway.com.au
• Canoeing: dwellingupadventures.com.au
• Canals cruises: mandurahcruises.com.au
• Treetop Adventures: treesadventure.com.au