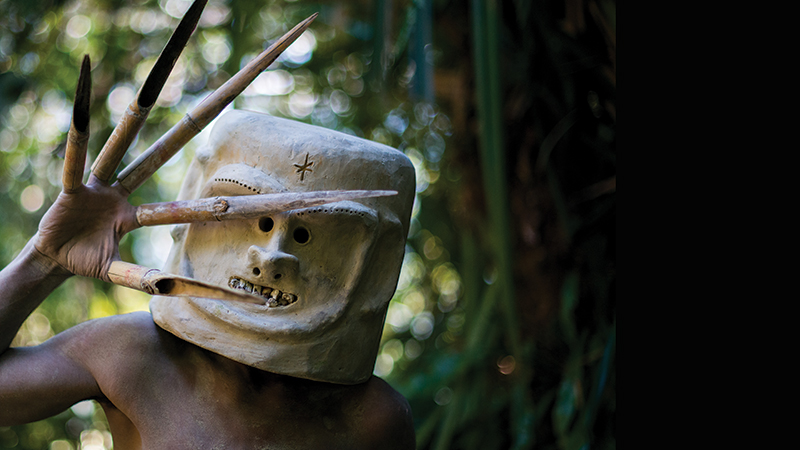 A question weighed heavy on my mind as my plane circled Papua New Guinea. How do I live like a local out here?

I found myself in a quandary. I was sent halfway around the world to get at the essential nature of the Papua New Guinea travel experience; to meet local folks here, there, and everywhere; and to discover a remarkable moment or two. But how to do all that in a place as unique as Papua New Guinea? Where to begin?

PNG has a reputation for being one of the wildest places on earth – millions of people in the vast interior and out along the coast continue to practice subsistence farming and fishing as they have done for tens of thousands of years; more than 800 languages and dialects flit on air currents from the Bismark to the Coral Sea; while rumours abound of highland people whom have never had contact with the outside world. In fact, the people of Mount Hagen were first introduced – not by their choice, mind you – to the West in 1933. So how would I, as a traveller, reconcile this PNG with the way I live my own life back home on North American soil?

Turns out, all I had to do was smile. After landing at Mount Hagen, my travel companions and I were carted over to the Mount Hagen Market, a buzzing hive of human (and not-quite-human) activity. I made fast friends with a betel nut vendor’s tree kangaroo, zipped between rows of impossibly colourful fruits with names I couldn’t possibly pronounce, skipped over scurrying chickens, and shook hands with just about every man and woman in attendance. There was an electric undercurrent to our visit – our group made up the entire foreign presence at the market that day, and it was certainly no secret that we were there. Wide-eyed children fell over one another in an effort to get in front of my camera, convivial ladies carved up fruits and vegies and doled out generous samples, and men with steel in their eyes and machetes on their shoulders smiled enormous betel nut smiles when a casual grin was sent in their direction. In this place of vast differences, the one constant – though it was kept concealed at first – was the smile. 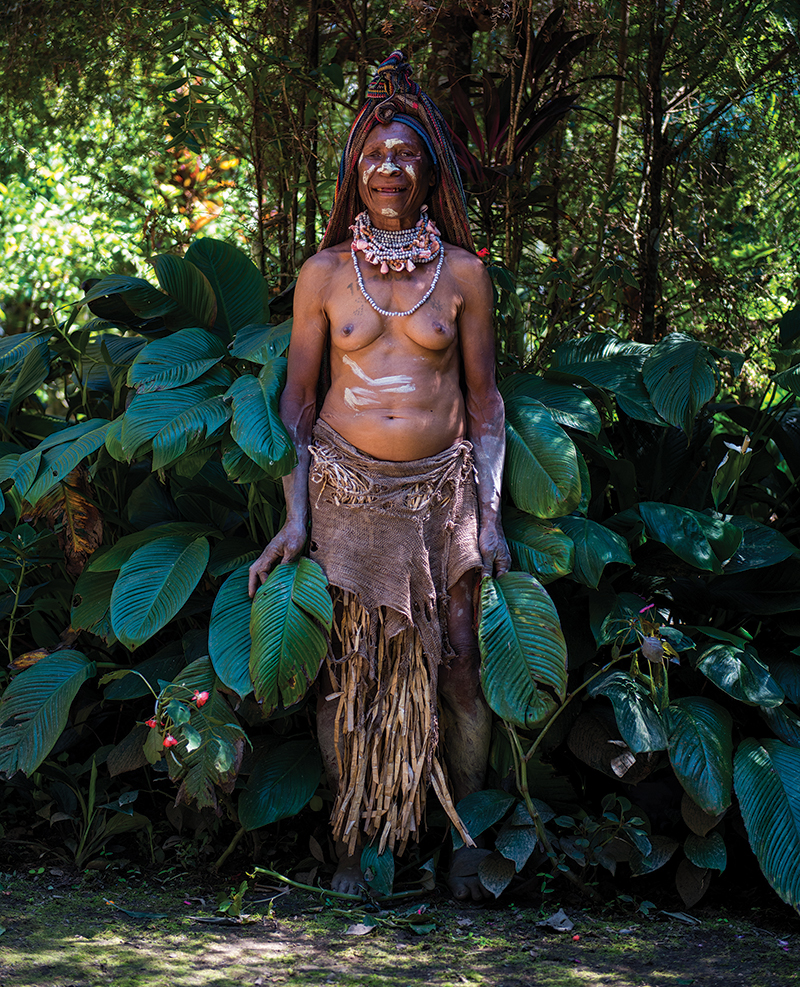 Mount Hagen’s reputation as a lawless frontier keeps some visitors at bay, but nothing during our visit set off alarms. In fact, the local folk we met couldn’t have been warmer or more welcoming. Save for the terrifying Asaro Mudmen we encountered in the hills.

We followed a winding dirt road into the highlands, out past quaint villages, perfectly manicured fields and children playing in small mountain streams. We came to a stop opposite what seemed to be impenetrable bush, but our guide led us down a hidden path to the gate for the Pogla Cultural Centre. Upon crossing the threshold, I was struck by what I can only describe as an otherworldly presence; an elderly woman in full highland regalia tended to a small fire, while opaque spectres danced in the bush beyond the flames. As if on cue, the sky clouded over, and the Asaro Mudmen came stalking out of the green. These ghastly apparitions wore skirts of grass and leaves, long talons of bamboo on their fingertips, white mud on every inch of their bodies, and imposing helmets of mud, each decorated with what I could only presume were human teeth and animal horns. The Mudmen cut a striking figure against their surroundings; I could only imagine what their enemies must have thought when the Mudmen set upon them during battle. 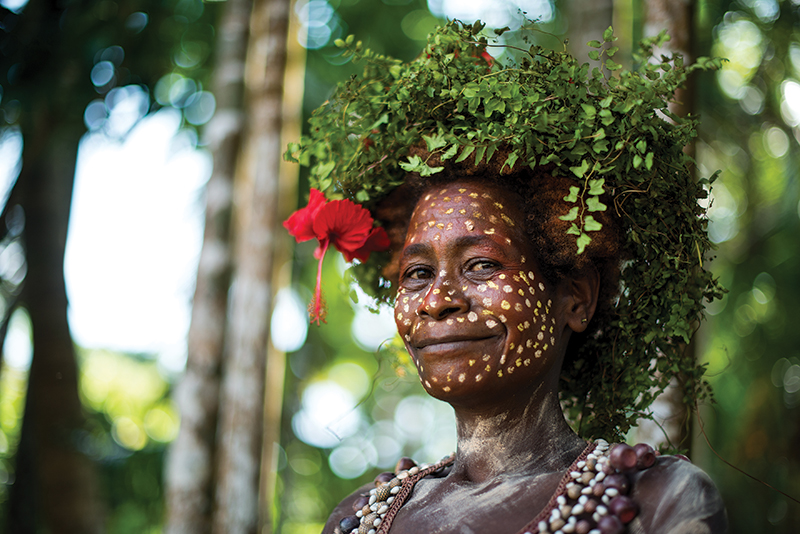 Legend holds that a band of peaceful villagers, originally from the village of Goroka in the Eastern Highlands, were waylaid by another tribe and forced to abscond from their traditional homelands. These villagers were chased into the Asaro River, where they waited for the cover of night to aid in their escape. But as they rose from the water covered in mud, their enemies thought them evil spirits, and retreated in terror. The Asaro Mudmen then began crafting their incredible helmets to use as a deterrent against any would-be invaders.

Our group managed to hang in for the entire performance put on by the Mudmen, and were granted an opportunity to peek behind the masks, where huge smiles were hiding. Our Mudmen ranged in age from 9-16, and are part of a family dedicated to preserving an antiquated way of life and scores of highland traditions. The family’s patriarch shared with us Mudmen lore, and his reasons for why it is important that native highlanders protect their ancient traditions in the face of a quickly-modernising Papua New Guinea. 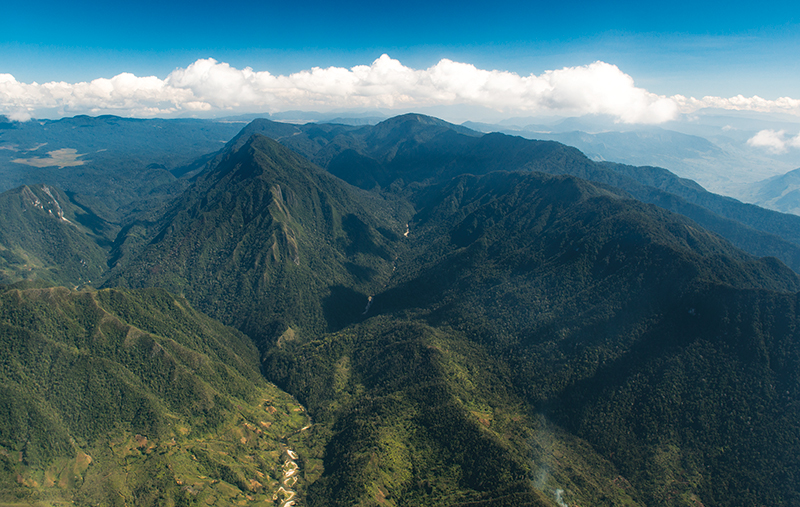 My first real glimpse at life in PNG ended with a visit to the beautiful lodge at Rondon Ridge, located at 2,164 metres above sea level on the hipbone of Kum Mountain. I marvelled at the mountain views as I contemplated life in the valley below. I think it was in that moment that I realised just how awesome the opportunity before me was – a chance few people on earth have to experience an ancient culture and way of life quickly vanishing from the face of the earth. I decided that if I couldn’t exactly live like a local in my limited time in PNG, I would learn all I could about a very special way of life.

Everything changes for the traveller when he’s afforded an opportunity to become an active participant in his own getaway. Walking through museums, touring (but not touching – never touching!) sites of historic importance, or zipping around on a bus, boat, or car while the landscape whizzes past at 65mph: each is well and good in its own way and enjoyable from time to time, but nothing can replace the sensation one feels when engaging a local on their own turf, and at their own game. For me, this is how experience comes to life, and this is how I most feel connected to a place, a space, and people. 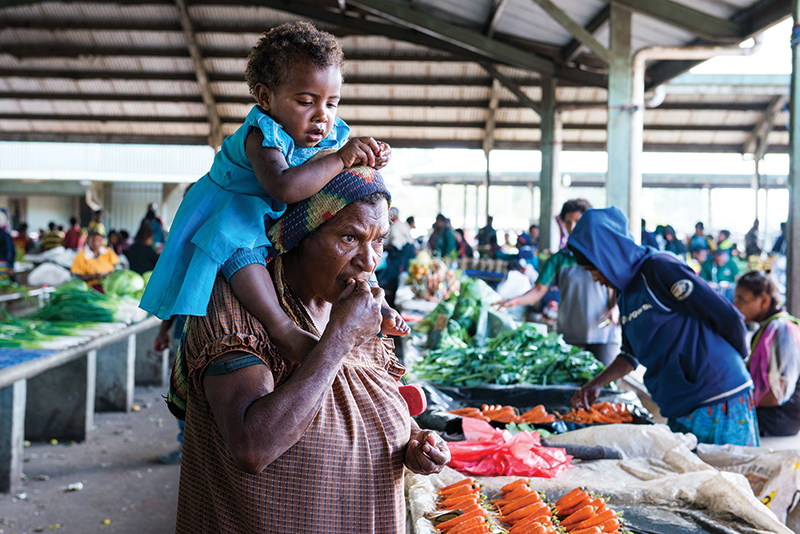 I felt very much alive while standing on a fallen tree out in the middle of the Karawari River, a hundred miles removed from nowhere. A cadre of local Papua New Guinean kids had caught the attention of our Swain Destinations crew while we enjoyed our riverboat lunch, and encouraged us to join them for a swim. Without really thinking about what might be lurking in the water, we went for a dip. We had spent the morning visiting villages in the Arambak region, notorious the world over as the site of ancient crocodile scarification rituals, headhunters, and cannibalism. But none of that had me as scared as that unsteady branch dangling ten feet above the river. Still, I was afraid of looking like a punk in front of the kids, so I took a deep breath and dove in. I popped up downriver to the unabashed cheers of my new friends, and before I knew it, I was up on that branch and ready for another death-defying bit of acrobatics. I suppose that one brief moment out on the river represented my time in Papua New Guinea in miniature – excited to be present, unsure of my footing, but eager to dive in just the same.

I think that’s how you have to approach a place as wild and as unique as PNG; with an open mind and a willingness to experience a way of life totally foreign to you. I’ve never known what it feels like to have to fish for my own dinner, plant my own crops, raise my own pigs, or carve my own canoe, and really have my life depend on it. Visiting villages along the Karawari and glimpsing at people living their lives in a way that would surely render me as useless as a screen door on a submarine in half a day was at once both humbling and beautiful. 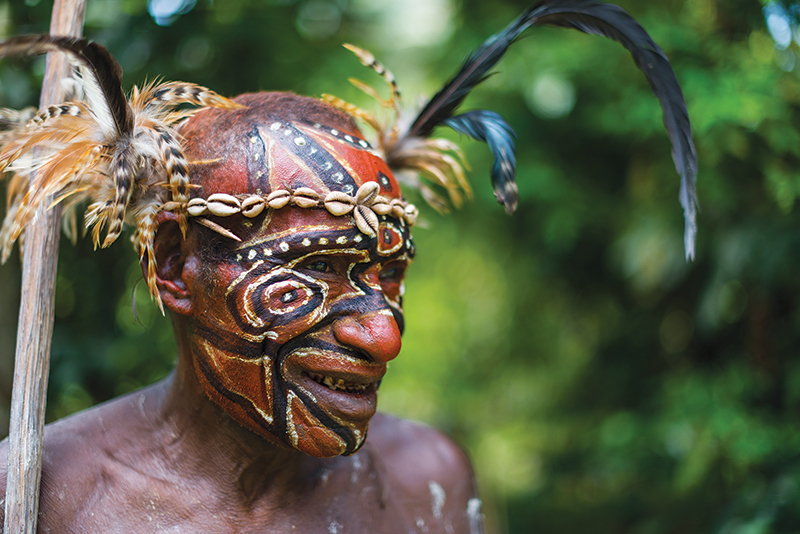 I’ll never forget our visit to the Kundiman village, where the Yokim tribespeople greeted us in their finest traditional costumes – the women wore spectacular shell necklaces, colourful grass skirts, and elaborate headdresses decorated with flowers and ferns, while the men donned clay body paint, skirts of banana leaves, and fierce face paint. Men showed us how villagers along the Karawari have harvested the sago palm for centuries – I’m certainly not strong enough to smash sago fibres, and I probably never will be – while the women put on a cooking demonstration, treating us to traditional village fare. The kids laughed as we sampled sago pancakes, and delighted in sharing with us their river games. We visited another village where we tried our hands at basket weaving; mine was originally supposed to hold live fish, though it’s unlikely I’d have been able to use it to catch a cold. We were treated to local lore inside a spirit house, and sat back in awe as Konmei villagers engaged in a spirit dance.

Each village visit was a snapshot in time, and a showcase for a quickly fading aspect of traditional life – and when and where we were asked or given an opportunity to join an activity or speak candidly with local folk, our experience was that much more enriching.

We spent our nights at the beautiful Karawari Lodge, a rustic river outpost outfitted with more amenities than one would expect to find in this very remote part of the world. I treated myself to a South Pacific lager out on the balcony, where I kept watch on the setting sun. When the light burned out dozens of tiny fires came alive in the distance, each signalling the beginning of evenings of song and dance in the villages. I wasn’t worried about WiFi or email or anything else but what stories were being exchanged down below me. I knew then that Papua New Guinea had captured my heart, and that I’d someday soon be back for more. •

When To Go
PNG is a year-round destination, thanks to its size and diversity. Mar-Oct is dry season, Oct-Dec is when the rains begin, while Dec-Feb is the true rainy season (which is the best time to visit the Sepik, as the river runs high).

Where To Stay
The Karawari River Lodge is a remarkable hideaway built high on the banks of the Karawari River. Rustic and remote but featuring creature comforts and excellent food, this is the perfect place to unwind after days of touring.
pngtours.com

Touring There
Swain Destinations is the leading provider of completely customised vacation experiences. Since 1987, their dedicated team of destination experts have offered travellers the opportunity to design distinctive trips to intriguing international locales, including Australia, New Zealand, the South Pacific, Asia, India and Africa.
swaindestinations.com