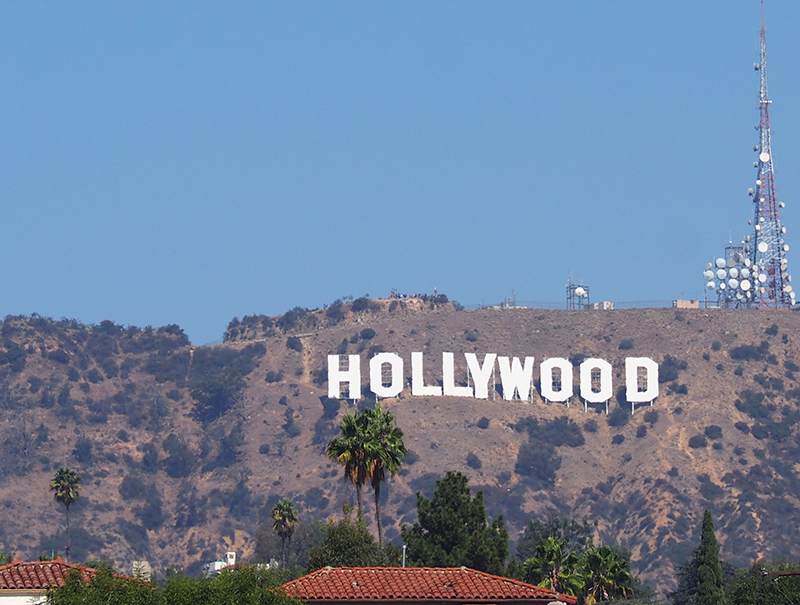 It’s mid-morning on a hot day in October and we’re high up in the Hollywood Hills at Griffiths Park, standing under the shade of a tree with a direct view over the famous ‘Hollywood’ sign. This park spans over 1,822 hectares and is one of the largest urban parks in North America. The views of the city are spectacular, but due to the 36-degree Celsius heat, our vision is partially limited due to the haze hovering over a large part of the city. It feels as though we’re in heaven, hence the Los Angeles moniker, the ‘City of Angels’.

The observatory is located here at Griffiths Park and this is the place to be at night to see the stars and surrounding planets. It features public telescopes, planetarium shows and interactive space exhibits. It seems like a lifetime away from what most people would expect to do when they first arrive in Los Angeles. 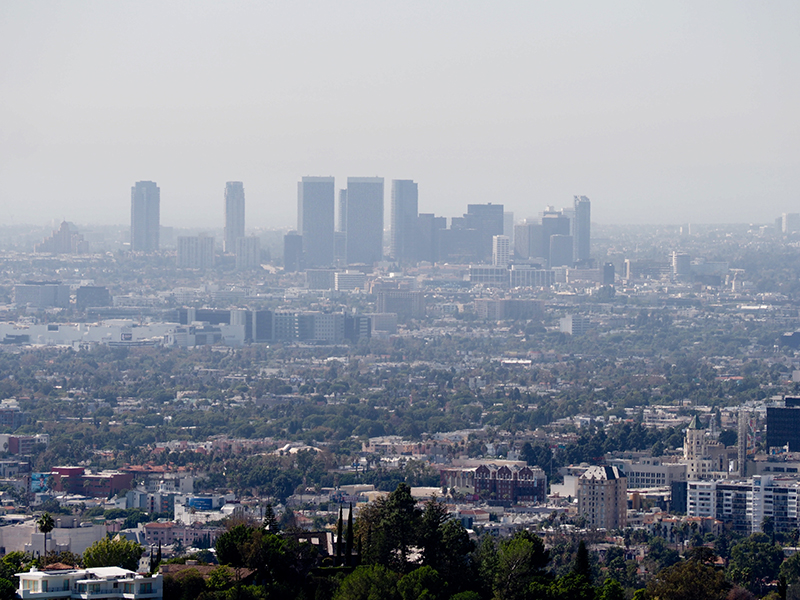 The first stop would usually be the ‘Boulevard of Broken Dreams’ (Hollywood Boulevard) and it’s here you’ll find The TCL Chinese Theatre, Dolby Theatre, Madam Tussauds, the Wax Museum and the Guinness Book of Records Museum. You’ll also find every hawker trying to sell you seats for a Hollywood and Beverly Hills tours of where movie stars ‘allegedly’ live and every other shonky tour that’s available. There’s also every superstar and superhero immortalized in costume along with the obligatory Michael Jackson impersonator all trying to make a buck from gullible first time tourists by getting you to take a photo with them. It’s absolute wackyville!

The renowned ‘Hollywood Walk of Fame’ also starts in this area and goes for 15 blocks with virtually every major star and celebrity having his or her signed foot and handprints embedded here in the sidewalk.

The next predictable stop would have to be Sunset Boulevard, an iconic street that stretches from downtown Los Angeles right through to Hollywood and all the way west to the Pacific Coast Highway. 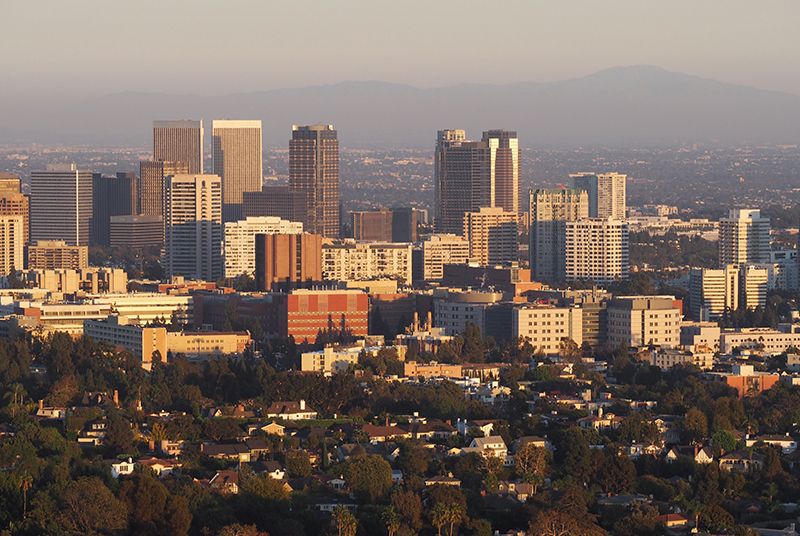 The Sunset Strip portion of Sunset Boulevard in West Hollywood has been famous for its vibrant nightlife for 60 years and consists of landmarks such as Chateau Marmont, Cinerama Dome, Comedy Store, Directors Guild of America, The Roxy, Sunset Tower Hotel, Viper Room and Whisky a Go-Go, just to name a few.

Being also the bar and nightclub central, we visit a few restaurants and bars that are the places to be seen such as Catch, with its trendy rooftop bar and also SUR Restaurant and Lounge, on which the reality show ‘Vanderpump Rules’ is based. Aspiring actors, models, ‘industry’ people and the like are all here strutting their stuff trying to ‘catch’ the attention of possibly a director, producer, talent scout or somebody rich!

We opted to be more low key and ended our night at one of L.A’s finest dining institutions, the all night Taco truck, conveniently parked at a corner gas station. 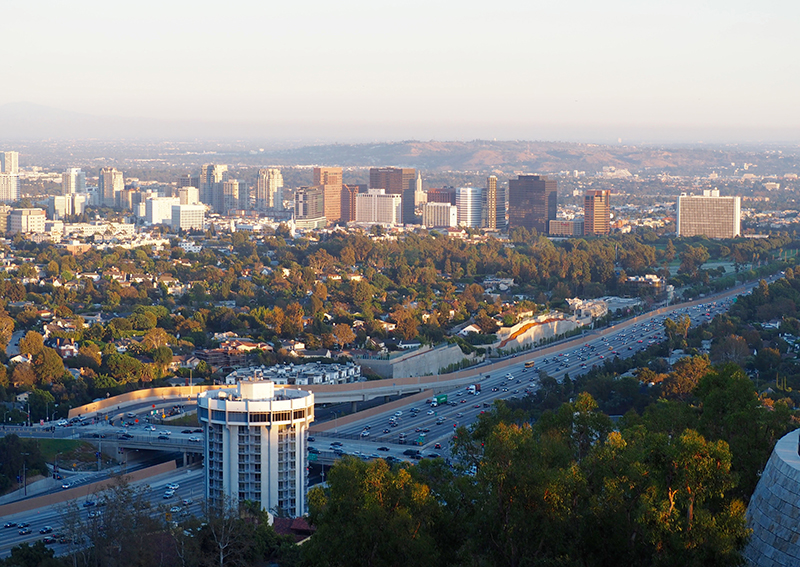 After our salubrious meal it was only a short taxi ride to where we stayed at the Sofitel Hotel, Beverly Hills. The hotel exudes European sophistication and is perfectly located opposite the Beverly Centre and close to the Farmers Markets/The Grove, Universal Studios and Melrose Avenue.

Now if you’re keen to spot the mega wealthy, celebrities or reality show queens and their entourage then there’s one area that you can be almost guaranteed to see them and that’s the exclusive shopping enclave Rodeo Drive. Gucci, Prada, Louis Vuitton, Hermes, Chanel, Tiffany, Versace, D&G, Jimmy Choo, Fendi and many more are based here. If it’s luxurious and over-priced then this is where you’ll find it! 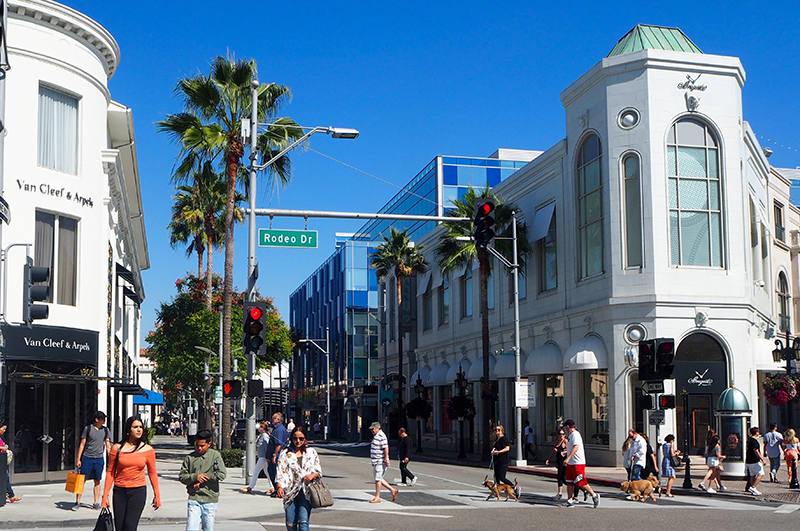 There’s also a cultural side to LA and we call in to the Annenberg Space for Photography, currently showing the ‘CUBA IS’ photographic exhibition (on until 4 March 2018). The exhibition explores aspects of Cuba not easily accessed and is quite profound, revealing its many complexities. Along with an intriguing short film and a few pop up Cuban stores, this is one of the best and most interactive photo exhibitions I’ve attended.

The next day took us to what I would say is the best Los Angeles has to offer and that to me is the opulent J. Paul Getty Museum. The permanent collection on view here comprises of paintings, sculptures, drawings, photographs, manuscripts, antiques, relics and works of decorative arts.

Some of the world’s most famous artists including Vincent van Gough, Rembrandt and Peter Paul Rubens have paintings displayed here. 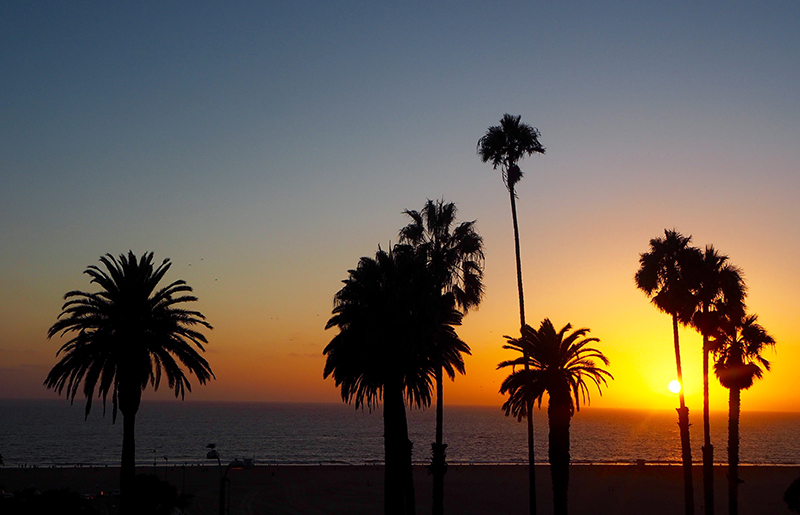 The next couple of days are spent in one of my favourite towns in California, Santa Monica. We stay at the Shore Hotel, which is centrally located opposite the beach and the Santa Monica Pier.

The pier was opened in 1909 and exudes an old world charm. An additional pier was added in 1916 that houses all the rides today such as the ferris wheel, the big dipper and the carrousel which was built in 1922 and features 44 hand-made horses. 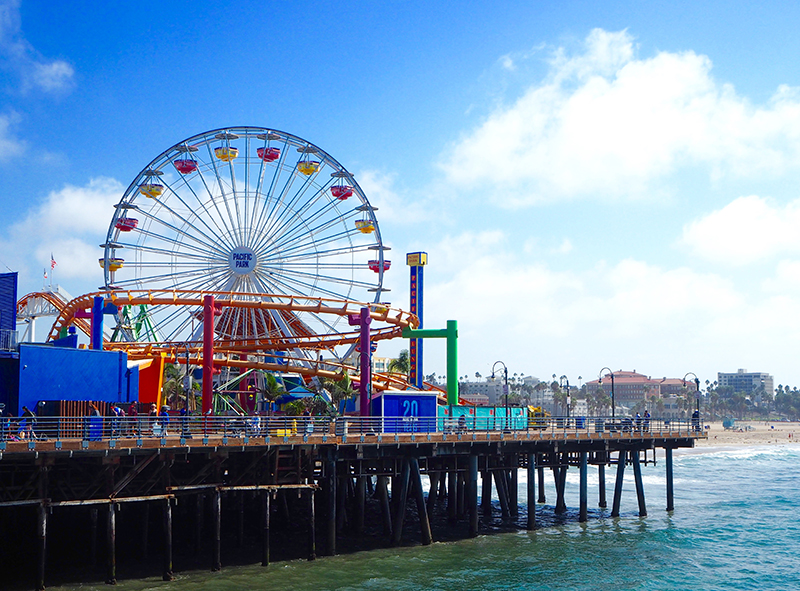 After a quick perusal of the pier we’re soon aboard a couple of complimentary Shore Hotel pushbikes for a must do ride along the Venice Beach Boardwalk.

It’s not too long before we’re passing some of the legendary long term boardwalk characters such as the snake man, who has a new addition to his snake collection, a creamy coloured python and business was just like his voice, booming!

Not long after snake man, the bearded, guitar playing, roller skating legend soared around us trying to sell us anything and everything you could wear or smoke. Next up at the human zoo we pass the pot shop guys dressed in their Sunday best leafy green coloured medicinal marijuana suits and the old lady playing her even older weathered piano. 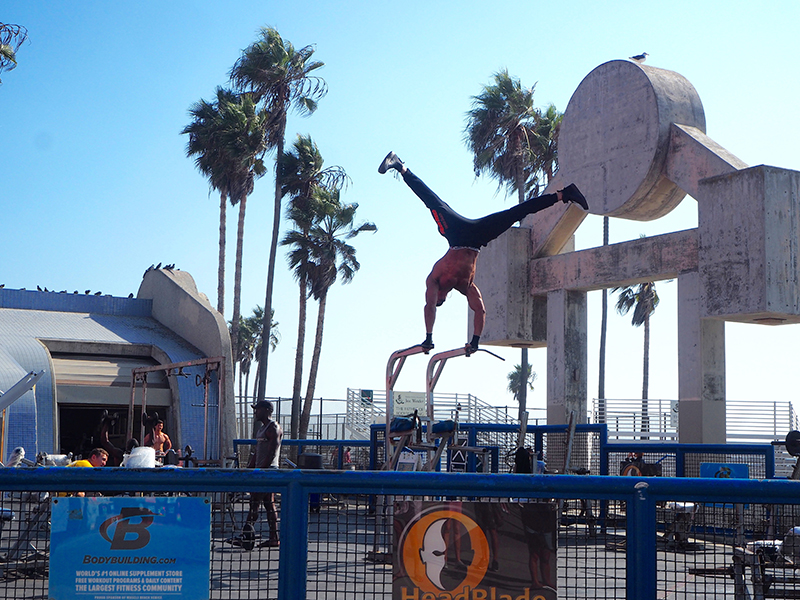 Before too long we approach the most popular boardwalk attraction of them all – the Venice Beach outdoor gym. This area is known as Muscle Beach and has been a boardwalk favourite for a long time. Some of the world’s most well-known and largest body builders have strutted their stuff here such as ‘Arnie (I’ll be back) Schwarzenegger’ and the biggest green man on the planet ‘Lou (the hulk) Ferrigno’.

There was no recognised celebrity training the day we are there, but the main guy working out was a giant and he didn’t disappoint and certainly didn’t mind having a chat to himself. Obviously he was off his meds for the day! After gawking at the freak of nature for a while and watching him perform some super steroid assisted chin and muscle ups, the dudes playing basketball nearby catch our attention. For the next 15 minutes it seems like it was a NBL mufty day such was the quality of the basketball being played. 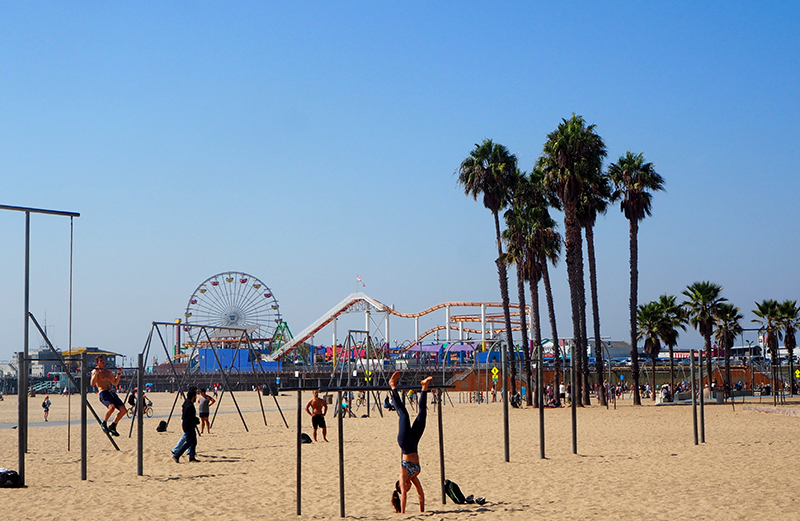 Cycling on for a few hundred metres, we come across a troupe of guys putting on an acrobatic routine that would not have been out of place at a Cirque du Soleil performance. After commanding our attention for about 20 minutes we continue our cycle ride to Marina Del Ray, which is the end of the boardwalk. Our next port of call is to ride a few streets back from the beach that takes us to the exclusive enclave of Venice Beach, the Venice Beach Canals.

The Venice Canal District is a neighbourhood in the Venice section of Los Angeles, California renowned for its man-made canals that were built in 1905 by developer Abbot Kinney as part of his Venice of America plan. Kinney’s grand plan was to recreate the appearance and feel of Venice, Italy, in Southern California. 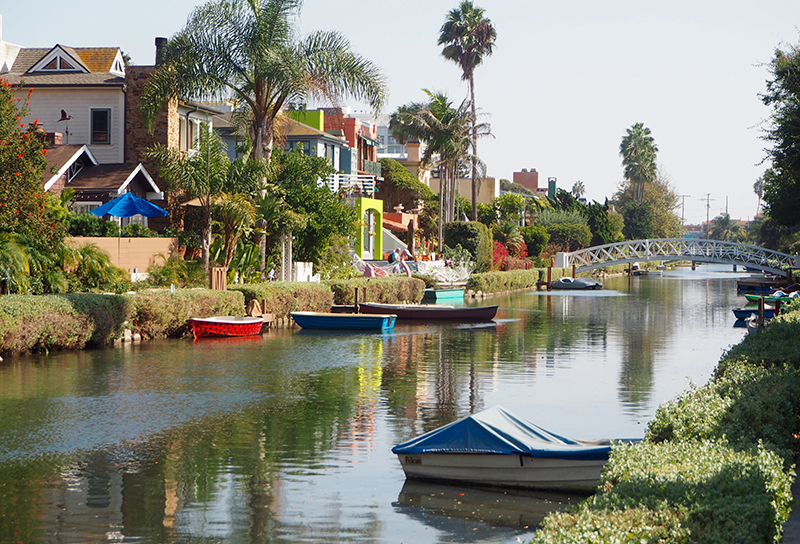 The small canal area is surreal, its like you’ve entered the real estate version of Charlie and the Chocolate Factory!

Los Angeles, Santa Monica and the Venice Beach Boardwalk never disappoints and I look forward to seeing the oddballs and characters here grow older and keep performing and entertaining for a long time to come. •