It is way after dark at Disneyland California Resort and I am sitting by the water in Disney California Adventure Park fighting back tears. They are tears of wonder, of joy, of the sheer delight of the World of Color, which is perhaps my all-time favourite show/attraction ever produced by Disney’s incredible team of Imagineers.

The show combines heart-string-tugging scenes from Disney and Disney•Pixar movies streamed on a huge wall of water that changes shape and size. Add to that the fountains that are all the colours of the rainbow one second and a brilliant blue or stormy grey the next as they shoot upwards, sidewards and every which way. All to the crisp and pure soundtrack of many classic Disney songs. I defy anyone to watch it and not be moved. 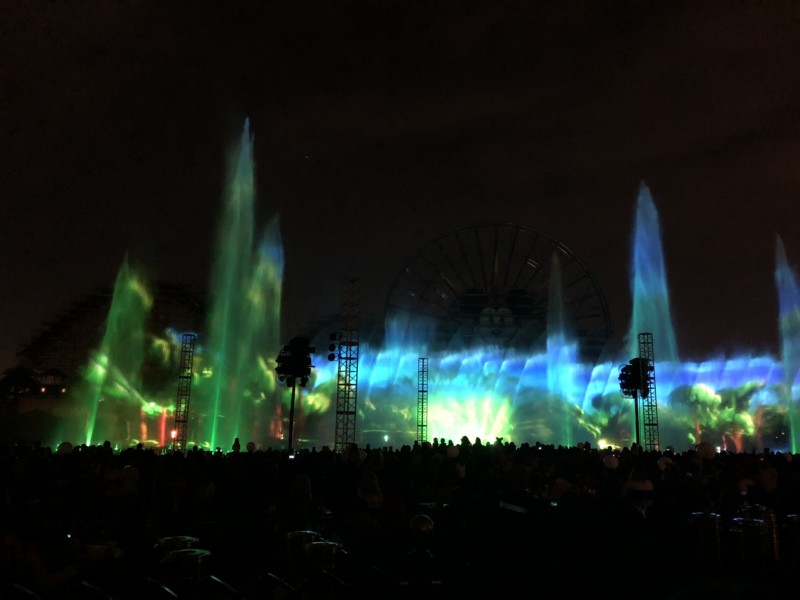 Our day started with Indiana Jones Adventure, a rollicking ride in the ‘Temple of the Forbidden Eye’ that is a good one to get you in the mood for more thrilling attractions. See if you can decipher the Mara-glyphic code on the walls.

A bit of Jack Sparrow spotting was next, in the historic and ever popular Pirates of the Caribbean. You will be yo-ho-ho-ing for a few hours afterwards. Unless of course you are scared silly by the Haunted Mansion, where Constance and George and all their ghostly friends get up to mischief, as we ride through the mansion on the ‘Doom’ Buggies. 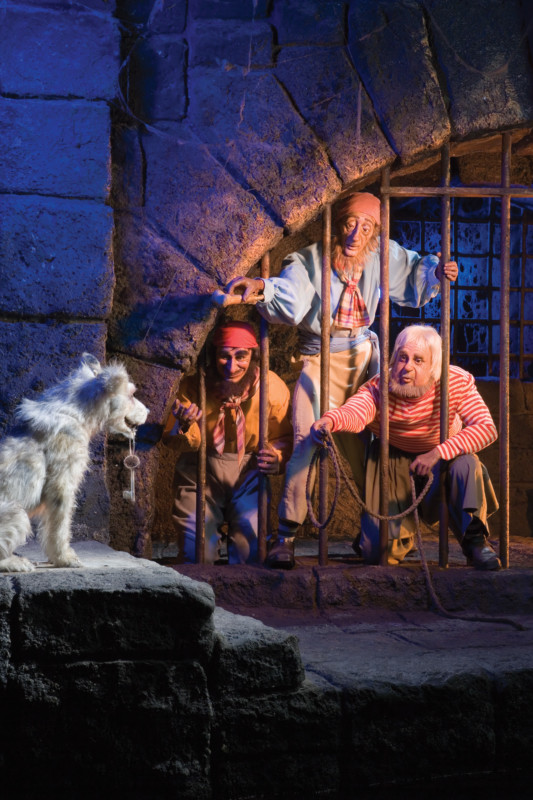 Big Thunder Mountain Railroad got the heart rate up a bit as we hurtled and bucked our way through an old mine, so we toned it down a bit by popping in the Royal Hall to have a chat with Snow White, who had never heard of a plane, Ariel and Cinderella.

Space was beckoning so it was off into the galaxy with C3PO on Star Tours: The Adventure Continues. With a bit of help from R2D2 we narrowly miss disaster on many occasions, as we hurtle through various galaxies at warp speed. More space fun followed with Space Mountain, best described as a roller coaster completely in the dark.

Traditional Disney is not to be missed either, so we walked through Toon Town, stopping off for a look inside Mickey’s house, and Fantasyland, home to old favourites like the Tea Cups, Peter Pan’s Flight and, dare I say the words, It’s a Small World. Matterhorn Bobsleds is one of the stalwarts of Disneyland, and still packs quite a punch in the adrenaline department as it zigs and zags, rattles and hums its way around inside the mountain, sometimes in the dark. 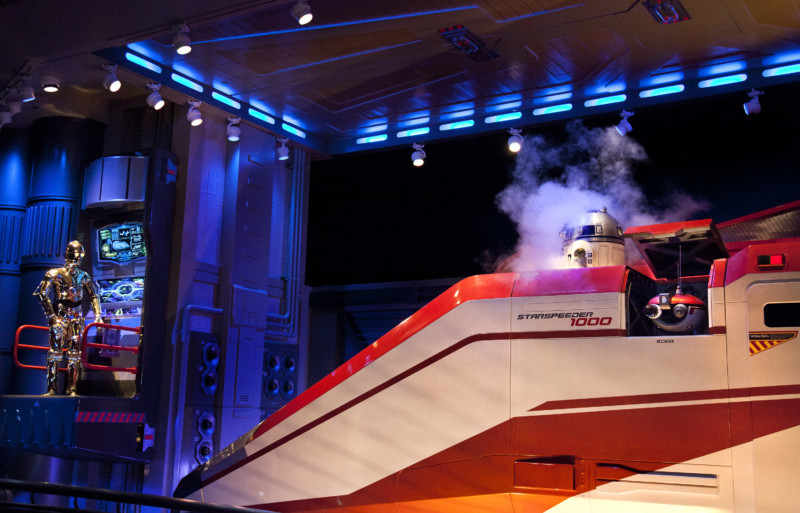 With our park hopper pass we could go between the parks as we wanted, and hop we did. Cars Land was first cab off the rank, or is that car off the grid, with the innovative and wonderful Radiator Springs Racers. Cars Land is like walking into the movie, with Radiator Springs and its streets coming to life, as well as its intoxicating rock walls, waterfall and surrounding features. Radiator Springs Racers is phenomenal, starting off as a lovely, leisurely drive in the countryside, and then, after a lick of paint or new tyres, the race is on. 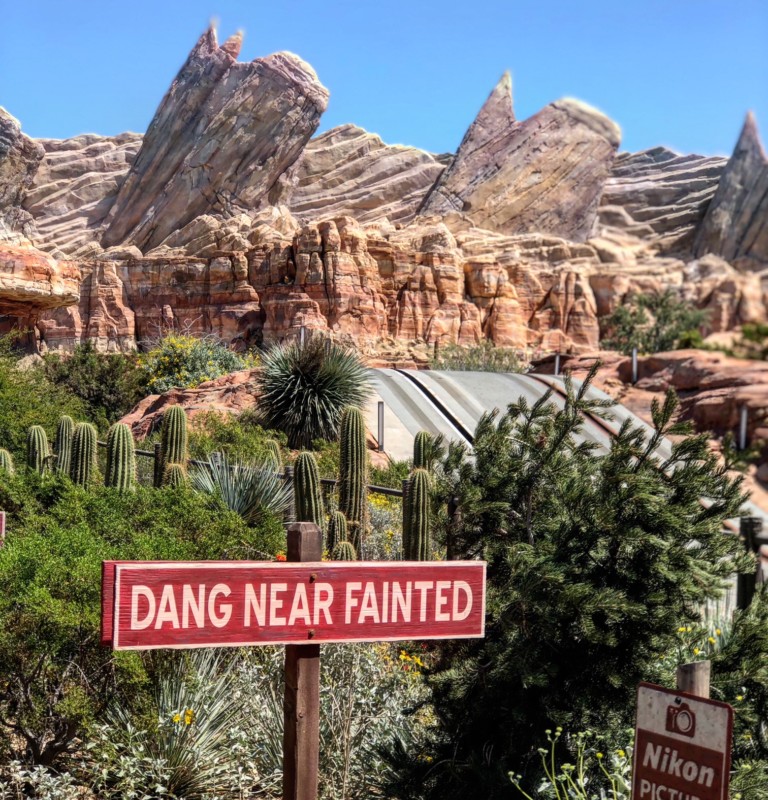 It was on the next ride, Guardians of the Galaxy – Mission: BREAKOUT! that I did ‘dang near faint’. I had been on this ride in its former life as the Tower of Terror, but it has been brilliantly transformed into this galactical adventure ride and has been amped up, in a big way. With cheeky Rocket calling the shots and trying to free his guardian friends, things turn quite chaotic and the frequent ups and downs, causing hair to stand on end and backsides to lift off seats, had me whimpering like a baby and digging my fingernails into the legs of the people sitting next to me. It is a little humiliating getting off and almost kissing the ground, while tiny children walk by begging mum and dad can they do it again.

To still my racing heart, we decide to go Soarin’ Around the World, a much tamer affair but no less exciting. This ride makes you feel as if you are soaring around the world, slipping over the Matterhorn, flying over polar bears in Alaska, zooming over a heard of elephants on the grassy plains of Africa (you can even SMELL the grass!), over the stunning Taj Mahal (the only footage that is not real) with the scent of rose water dancing around our noses, flitting over Sydney Harbour, over the tropical waters of Fiji, flying up to the top of the Eiffel Tower and the other-worldly Monument Valley before flying over the crowds down Main Street USA to Sleeping Beauty Castle. It is a wonderful ride; so good that we did twice more the next day. 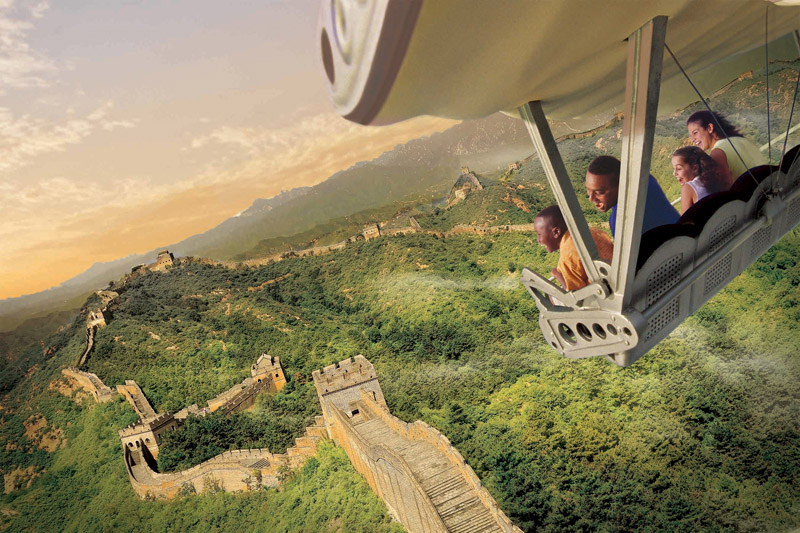 Toy Story Mania is another must and don’t leave it too late to grab a FastPass booking for it as it is very popular. It is particularly fun to do in groups and it is guaranteed that you will want to do it again afterwards. 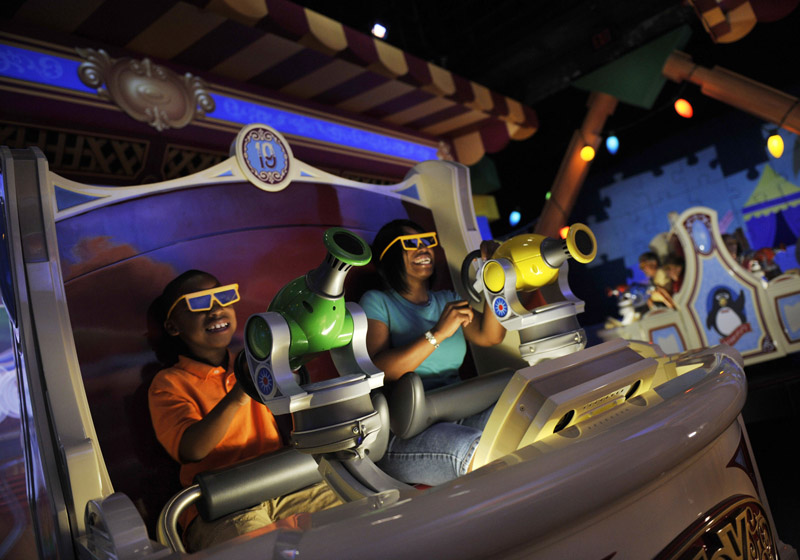 Grizzly River Run is a great way to end the day as there is a good possibility of getting wet. With our hotel, Disney’s Grand Californian Hotel & Spa about 100 metres walk away, being wet is not a problem, so we board with secret hopes that we won’t be the one who cops the brunt of the water. We ride the rapids, laughing and squealing as we rocket down the drops, water slopping in and raining in from stray geysers as well. It is a whole lot of fun and while we might have left a trail of wet footprints on the way to our rooms, it was worth every second.

FastPass and the new MaxPass

Many of the most popular attractions at Disneyland California Resort have a FastPass, which allows you to beat the queues. Rather than waiting, you can put your park ticket in the FastPass machine and it will spit you out a window of time to come back and go down the separate FastPass line to the front of the queue. It is a smart way to save time, but now there is something even better – the MaxPass.  Download the Disney App on your smart phone, register for MaxPass, scan your park ticket, then organise a FastPass Party by linking the tickets of your friends or family who are going to be riding with you.  On the day you are going into the park, go onto the app, and book the first FastPass ride. When you get to the ride, you can then reserve your NEXT FastPass even before you do the first one.  It is really easy – just scan the tickets of your party from your app and on you go. You can fit a lot more rides in using the MaxPass, so it is worth every cent of the US$10 per day you pay for it.

Facts about the development of World of Color

•  Team members were told they couldn’t have fountains with multiple heads or moving heads. They created them.
•  Team members were told they couldn’t create colour and light in fountains. They found ways.
•  Team members were told they couldn’t project images on water if it was not a water screen. They went beyond creating a “movie screen” on water – developing a show in which water, light and colour become the characters, on a screen so versatile that it might be 30 metres, 60 metres or 115 metres wide at any given time.
•  The “World of Color” creative team, led by Walt Disney Imagineering Creative Entertainment, believed it was important to execute the show on a massive scale. After looking at existing fountain/water shows – many of them very spectacular – the cast members concluded that, in the words of Walt Disney, “It’s kind of fun to do the impossible.”
•  The “stage” for “World of Color” is a platform composed of nearly one full acre of engineered superstructure, longer than a football field and capable of settling on three levels – one for the performance, one under the water surface and one for maintenance.
•  The show features nearly 1,200 powerful and programmable fountains, and a vast underwater grid with more than 18,000 points of control. Each fountain has multiple points of control for lighting, color intensity, water angle, height and more.
•  “World of Color” employs 28 high-definition projectors (14 of them, submersible).