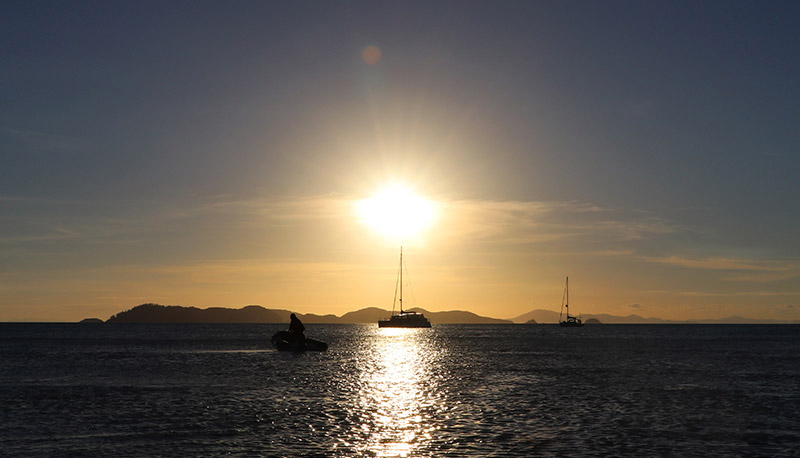 Winter in Sydney is not so bad, but I was feeling the need for winter warmth, vitamin sea, salt spray and open skies. I also wanted to do something useful, so a week away on the Great Barrier Reef made for a tempting break, even when the Wild Mob Expedition I was joining involved some kind of ‘work’.

A friend had introduced me to Wild Mob, a not-for-profit organisation managing conservation projects in eastern Australia, New Zealand and neighbouring pacific islands. Throughout the year, they run expeditions, taking volunteers on conservation adventures of project work in combo with a holiday. So from Mackay I boarded Wild Cat with five other volunteers, our project leader and Wild Mob chief executive officer Derek, skipper Steve and two of their new staff recruits who were in for a new adventure as much as we were.

It was shaping up to be a gorgeous Queensland winter’s day as we set out to open sea for the Cumberland Islands. Fine warm days, clear fresh nights and calm seas became the weather pattern for our week and with a water temperature of about 22 degrees, I was pretty much in heaven – with a prime position on the front deck of a workhorse catamaran, scanning the seas for the odd whale we were likely to see on the way north. 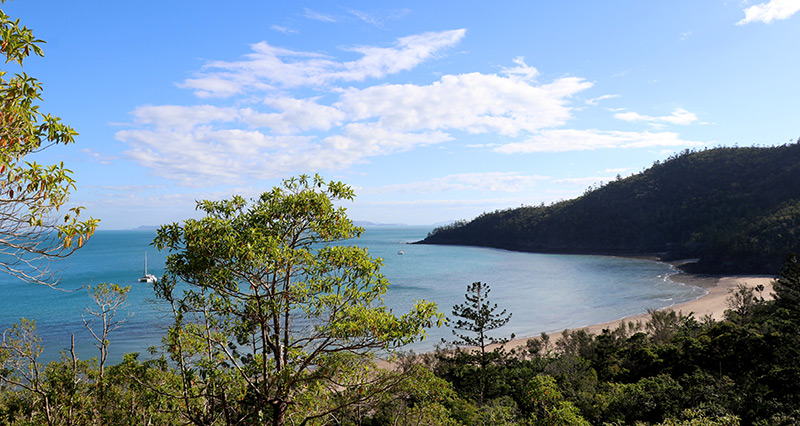 Hiking over the island we took in views back to camp and ‘The Wild Cat’ in Roylen Bay. Photo: PMGraf.

Hoop Pine forests fringe the rocky coastlines of the islands in the Cumberlands passage, while tropical sandy beach crescents appear as we make our way through, their  pristine aqua waters calling out for a swim. We spot a singular whale in the distance breaching big time and fin slapping playfully. Three hours motoring plus a short burst where the sails are let loose, takes us around the top end of Goldsmith Island and into our camp base at Roylen Bay.

Our first efforts are setting up camp along the beach, and we settle in with views out over the bay, the mainland on the horizon and a handful of anchoring sailing boats and catamarans dotting the panorama. Afternoons are free time, so we take the first of many swims in the calm aqua of Roylen and then while away the afternoon exploring and soaking up island life.

Many of the beaches are turtle nesting sites and as well as suffering from the battering of the last cyclone, there is the constant washing up of plastic debris polluting the coastlines. We take to walking the tide lines along the beach, not only scouting for shells and coral for our shell shrine, but also clearing any plastics and rubbish we find along the way. Walking the tide lines becomes a meditative ritual over the week, after it’s gotten too late in the afternoon to swim, and before our five o’clock pick up.

Walking the tide line along a beach stretch on Goldsmith Island. Photo: PMGraf.

And there began another ritual – the five o’clock pick up – we’d gather back on the beach and Steve or Derek would arrive in the tender to ferry us back for ‘Sundowners’ and dinner aboard Wild Cat. Each evening gave us a differently hued sunset and waxing crescent moon as we chilled on the back deck with cheese, crackers and snacks washed down with a cold beer. The dinner menu took us around the world over the week – an Aussie BBQ, followed by a Mexican night, an Italian serata, Indian buffet and Indonesian fare as Derek cooked up a storm in the galley kitchen each night. A man of many talents our project leader…ecologist, Wild Mob CEO, marine biologist, cook and wild storyteller. With skillful navigation under little moonlight, skipper Steve ferried us back to beach camp, never losing any of us overboard in the dark. Early nights back at camp made for lying under an expansive starry sky on the beach, chilling or chatting, thinking about life and counting falling stars. 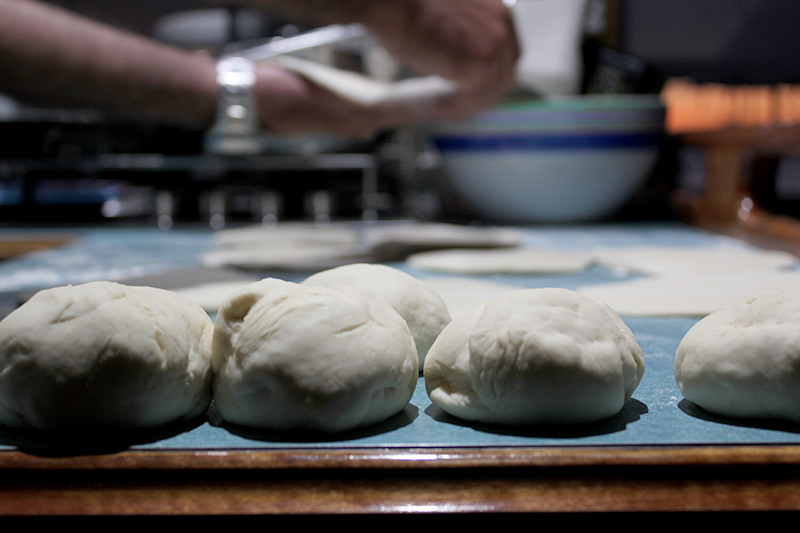 Our next dawn started the week’s routine – we were up with first light and a 7am pick up for breakfast back on Wild Cat and briefing for the day’s workings. Mostly we’d spend two shifts of two hours each morning working, broken up with a morning tea delivery of muffins or toasties by skipper Steve. Our main focus on Goldsmith Island was the removal of the rhoea plant which had gotten out of control after escaping from a garden planting and threatening the endangered beach rainforest. Over a couple of mornings we pulled swathes of this weed out and stockpiled huge mounds to be dealt with after more volunteer expeditions this season. 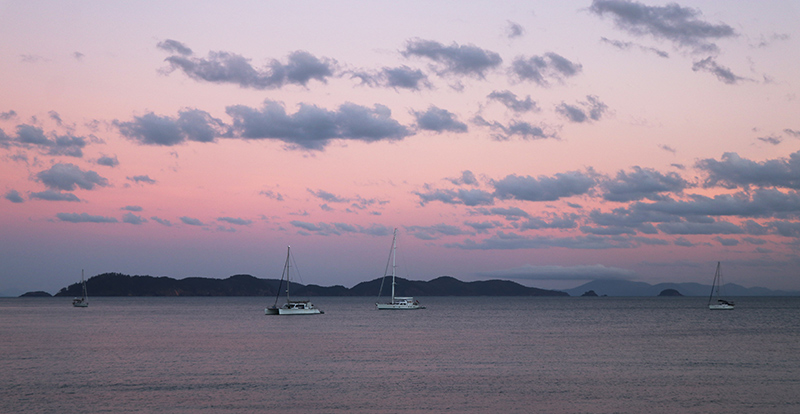 Dawn on Roylen bay, waiting for the breakfast pick up. Photo: PMGraf. 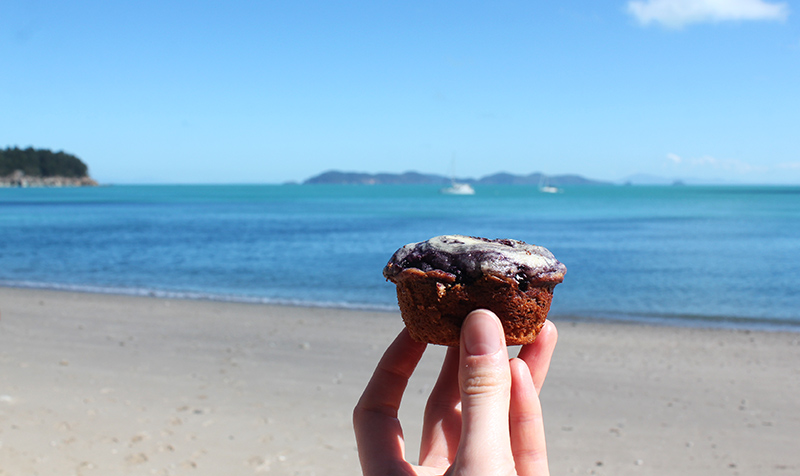 The working routine was broken up with trips to neighbouring beaches to check turtle-nesting sites for weed issues and walking the tide lines for plastic debris collection. We explored beach mangroves for turtles in residence and habitat condition. Then we’d get back to some more weed-pulling, trying to make as big a dent as we could on the rhoea mass in our short time at Goldsmith.

Mid-week we were treated to a breakfast of eggs benedict and bacon, in the crew’s efforts to fuel us all for the walk over the saddle of the island to Stingray Bay where prevailing winds and seas tend to deposit debris, and also to scout out a path to Hammerhead Bay for future work. Looking back from the top, we had a view over our beach camp, and Roylen Bay spread before us with Wild Cat anchored. Ahead is deep set Stingray Bay, with the tide yet to come in. We walked through a massive expanse of Xanthorrhoea or grass trees, whose discarded spikes make great hiking sticks, and through stands of hoop pine forest down to the beach for our debris clean up. Wild Mob work over the years here has meant our efforts are at maintenance level, picking up random plastics and rubbish and nothing like the deposits initially clogging this beach. 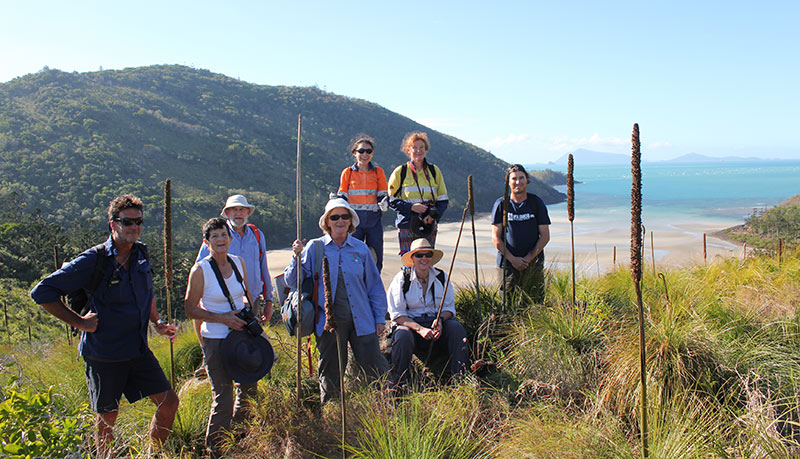 Saddle views of the team on the way to Stingray beach. Credit: Camilla Wagstaff, Wild Mob.

We’d ferry back to the catamaran for lunch after each morning’s work and I’d make sure to squeeze in a refreshing swim off the boat, taking the channel flow under the boat to end up at the marine swing seat before being called in for lunch. We sighted brahminy kites, sea eagles, turtles, ma and babe dolphin cruising by and schools of fusilier swarming around the boat. There was debate on whether the fins we saw off beach were ‘shark!’ or shovel nosed stingrays – the local turtle wasn’t freaking out so we tried not to. 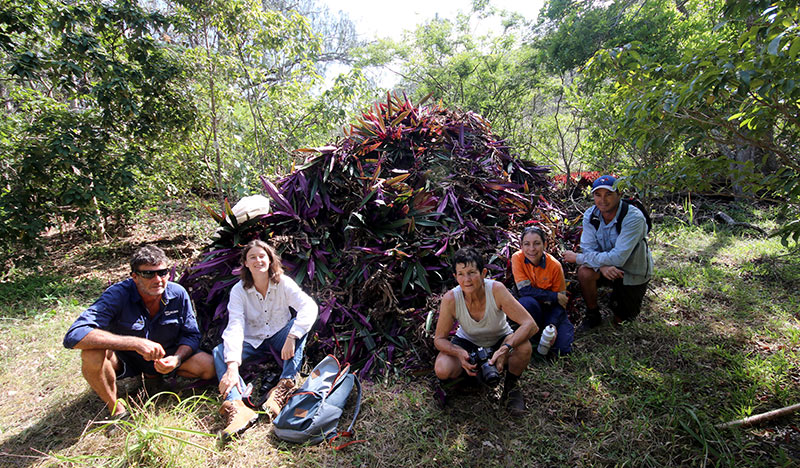 One of our rhoea weeding stockpiles. Photo: PMGraf.

Every afternoon was different – we’d take out the kayak and explore the bay edges, or take to swimming and snorkelling. The stand up paddle board was both means of transportation around the bay from which turtles could be sighted, and also a balancing platform of yoga stances from which we took turns to fall off from – well, I did generally fall off from. We spent our last morning snorkelling along the reef at Brampton Island, finding the coral had survived well after the cyclone and spotting stingrays, a carpet shark and more schools of tropical fish.

Our week had a schedule and routine, but never felt as such. The week flowed on casually and relaxed, never rushed, and we enjoyed it with a great crew, always eager to share their knowledge and experiences, and have fun. We were lucky enough to score a mob of volunteers thrown together randomly but getting on fabulously. We were the cheekiest mob they’d had on boat in a while apparently. 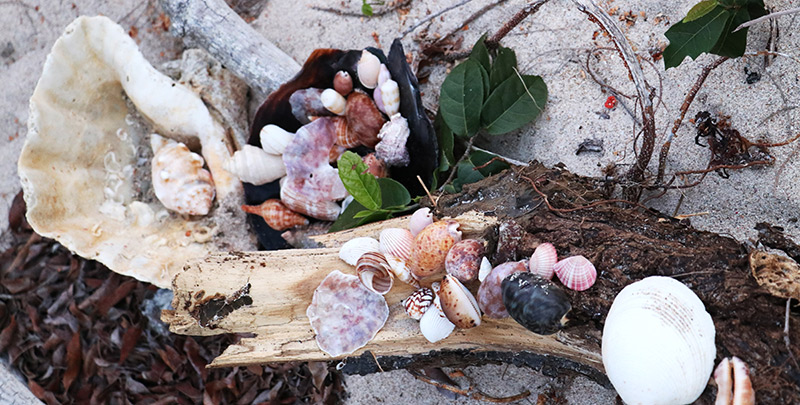 The shell shrine. Roylen is a no-take marine zone, we could collect and appreciate shells and bits, but would then disperse our findings at the end of the week. Photo: PMGraf.

On our last day, we broke camp from Goldsmith, dismantled and dispersed our shell shrine and made our way back south for the last night stopover anchored off Brampton Island. After a final burst of productive Yucca pod weeding on Brampton, and late afternoon swim, we spent our last night sleeping on deck in our swags under the stars. A low crescent moon shone a path along the water as Wild Cat rocked just gently enough through the night. Each time I looked out from sleep I had a canopy of stars to remind me what an amazing week I had experienced and what a beautiful part of the world I was in. It felt good to be a little bit useful on this holiday break, and to be part of a Wild Mob in their efforts to make a difference. Bring on the next expedition! 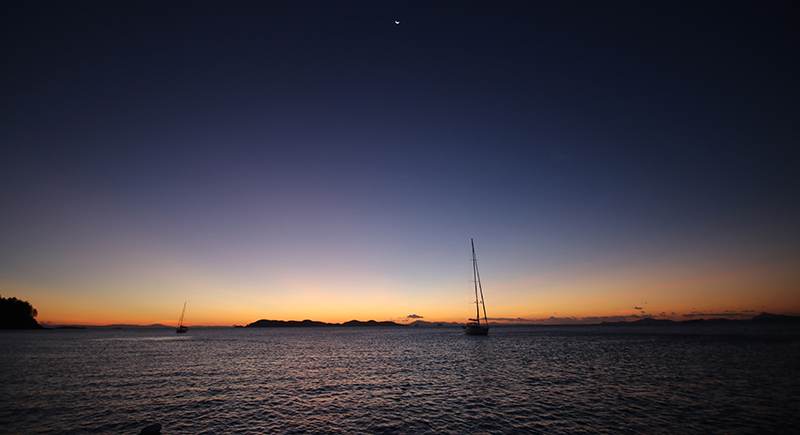