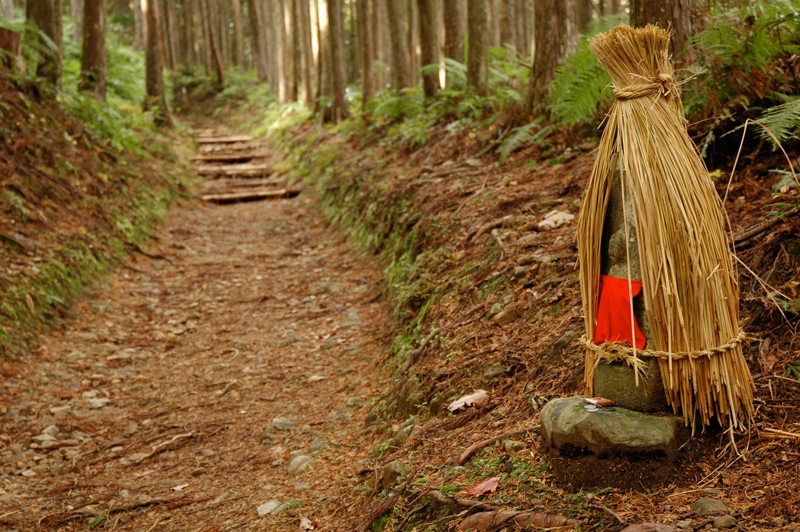 I feel apprehensive. I’m about to enter the ‘gate of awakening of the aspiration to enlightenment’. That sounds like a heavy concept. Am I seeking enlightenment? Am I up for the challenge?

Beyond the gate of awakening, called Hosshinmon-oji, lies a seven-kilometre section of the rugged Kumano Kodo pilgrimage trail. I’m in the heart of what’s known as ‘mystic Japan’, a remote region on the Kii Peninsula, 150 kilometres south of Osaka. It’s a mountainous place of dense cedar and cypress forests dotted with picturesque agricultural villages. Importantly, the Kumano area also boasts three of the country’s most significant shrines, or sanzan. One of them, Kumano Hongu Taisha, is where our trail is headed. 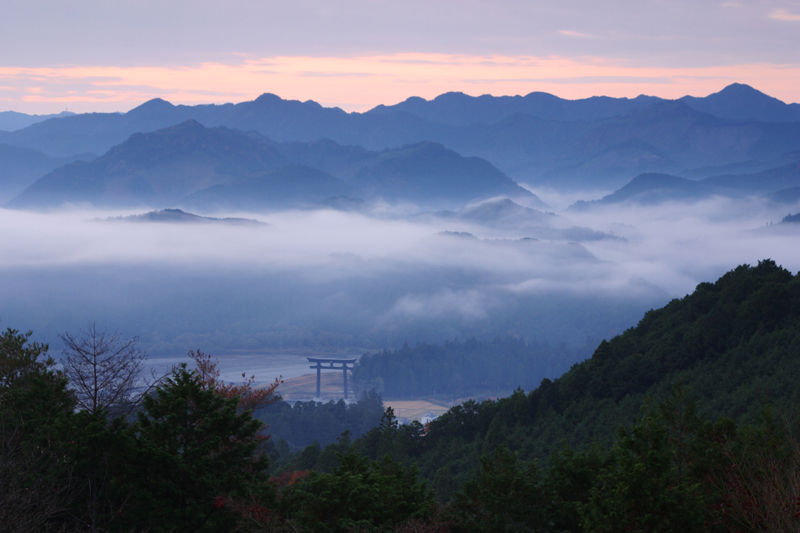 Pilgrims have walked the Kumano Kodo, now a World Heritage trail, for more than 1,000 years. At times, numbers were so great that pilgrims were described as a ‘procession of ants’. Originally a favourite of emperors, nobles and samurai, the Kumano eventually became widely popular as a pilgrimage route for ordinary people, regardless of gender, status or beliefs.

As I walk, I reflect on the people who have followed this trail in the past. The pilgrims sought peace, forgiveness and even salvation through their Shinto and Buddhist beliefs. They thought that paying respect to the kami, or gods, of this sacred place would bring purification and protection. When Buddhism came to Japan in the 6th century, the kami sacred to Shinto were regarded as manifestations of the Buddha and Bodhisattvas, ensuring harmonious coexistence between the two religions. 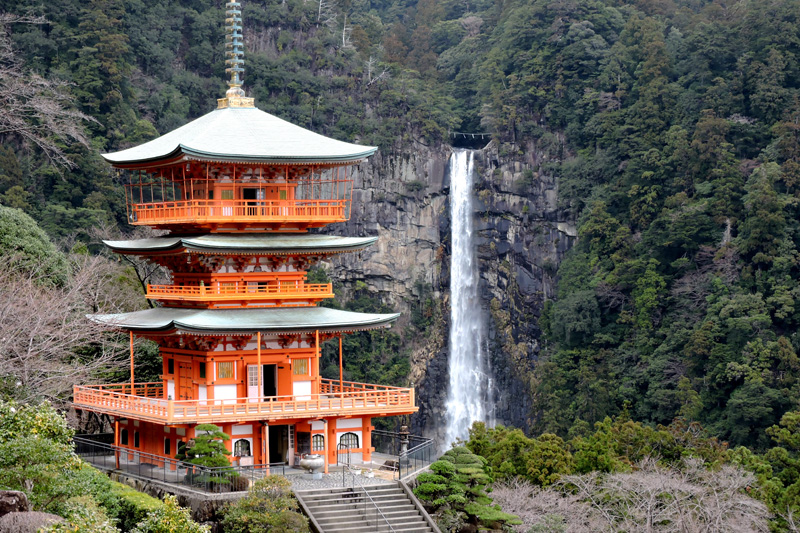 The fusion of Buddhism and indigenous religion in this area leads many to claim that Kumano is the heart of Japanese spirituality. Pilgrims shared the mountains with yamabushi, or wandering ascetics, who practised an esoteric mixture of Buddhism, Shinto and Taoism. But most importantly, Kumano spirituality was massively influenced by women. The Kumano bikuni, or nuns, were itinerant teachers and performers who overcame the oppressive attitudes to women predominant in early Japan. Little wonder that women are well represented on the Kumano Kodo trail to this day. 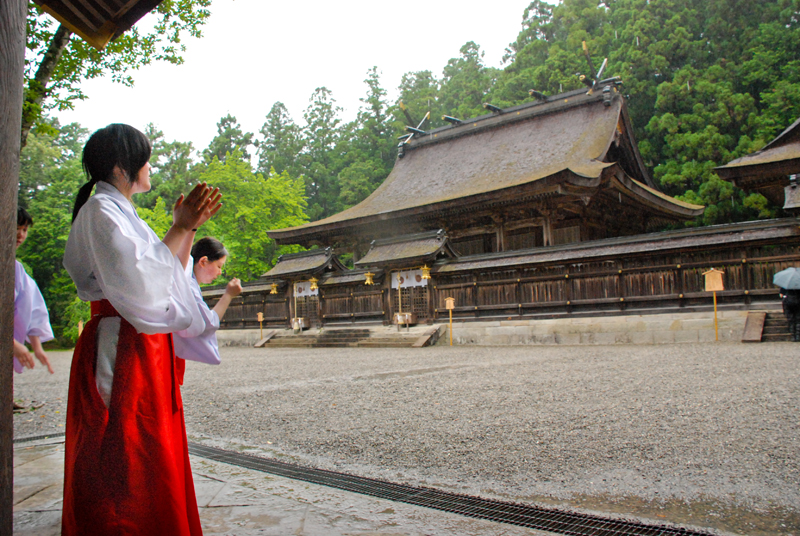 Openness and acceptance, hallmarks of Kumano, still permeate the region and predominate over any solemnity or piety. There are numerous small shrines called oji and rock carvings along the forest route, some dedicated to worldly aspirations such as avoiding toothache and back pain, while others are memorials to pilgrims who died along the way. 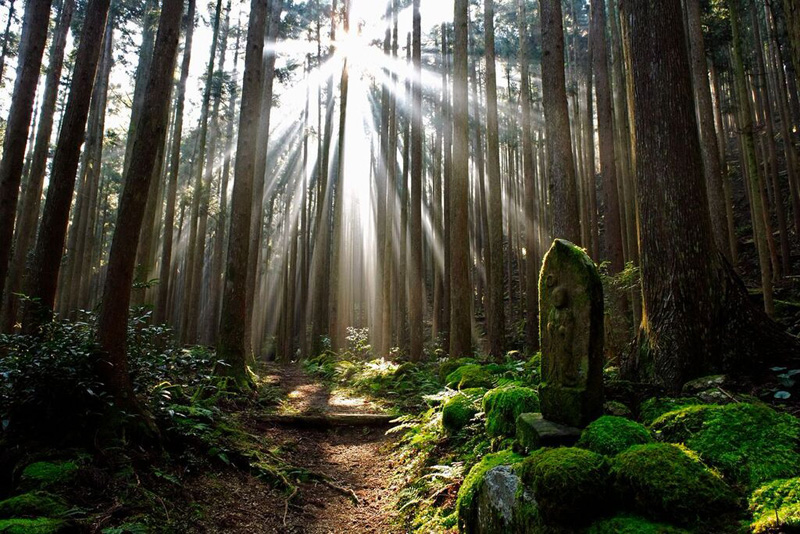 We emerge from the forest at the small settlement of Fushiogami, notable for its green tea plantations, vegetable gardens and terraced rice fields. Stalls by the trail offer wood carvings and a variety of agricultural products. A local woman walking in the other direction smiles as we pass. There’s a sense that these tiny outposts have witnessed a great deal over the centuries.

Not long afterwards we reach Fushiogami-oji, where there’s a lookout over the valley below giving the first glimpse of Kumano Hongu Taisha. Apparently devout pilgrims fell on their knees at this point, tearfully grateful to see the shrine that has been the object of their long trek. 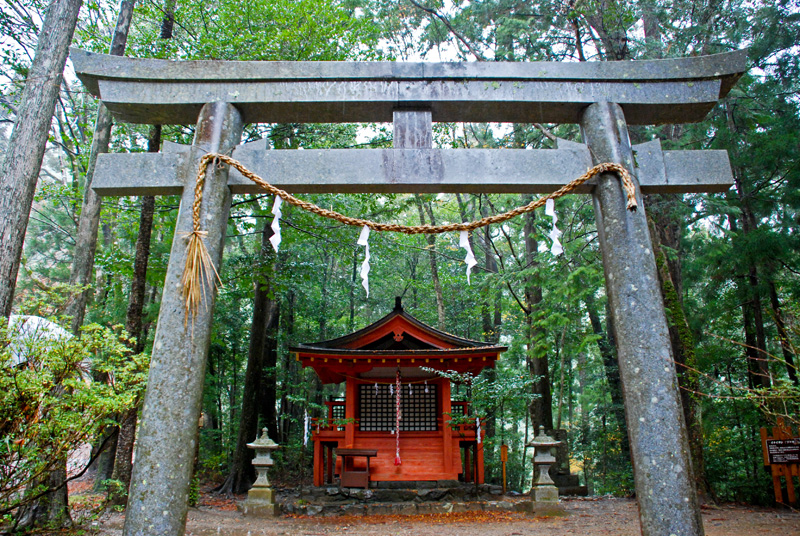 Even this relatively short section of the Kumano pilgrimage walk creates a very different experience from visits to most of the world’s religious sites. Apart from the physical effort required, you commune with nature before arriving at the major shrines, which changes your perspective. The only comparable trek is the Camino de Santiago and now, under a new initiative, people who complete both World Heritage routes can become ‘dual pilgrims’. Australia boasts the second highest number of dual pilgrims. 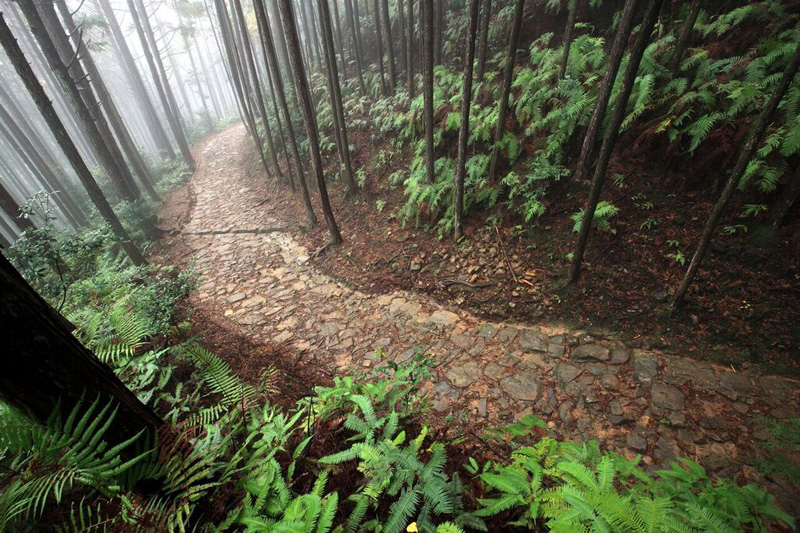 When we reach Kumano Hongu Taisha, Japan’s second most important shrine, we participate in a Shinto protection and purification ritual. The priest chants and then brushes a rod with a mop of zig-zagged paper at one end lightly over our heads as we kneel. Apparently demons can’t stand the hissing sound of the paper. Curiously, you can also have your car blessed for good luck.

Feeling purer, we drive past Kumano Hayatama Taisha on our way to Kumano Nachi Taisha. These are the other two grand shrines in the region. Nachi Taisha is the standout because of its stunning pagoda near the nation’s highest waterfall. We visit the Nachi Shinto shrine, built to honour the spirit of the waterfall, and the adjoining Buddhist temple, Sanseiganto-ji. 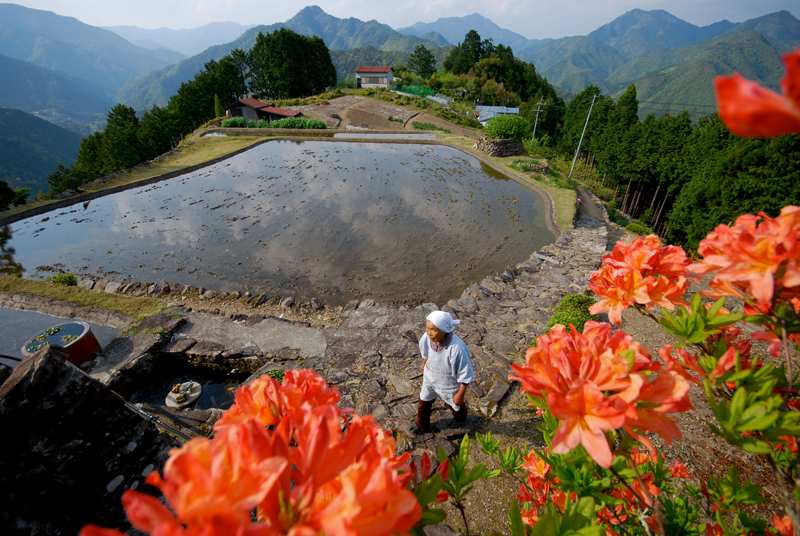 This is also hot spring (onsen) territory. Nearby Yunomine onsen is the oldest in Japan, while Kawayu onsen is located at a part of a river where heated water percolates through the gravel of the bed.

As I relax that evening in the hotel’s onsen, I have a chance to reflect on the day’s events. I feel a deep sense of satisfaction. While I may not have progressed on the path to enlightenment, I’ve certainly been immersed in an ancient spiritual experience that’s difficult to find in our fast-paced world. 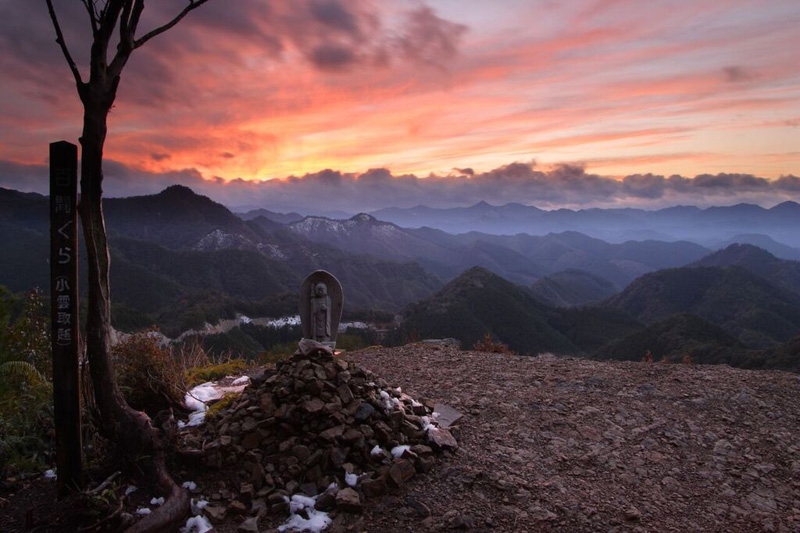 Jetstar flies to Osaka daily via Cairns. Kumano Kodo is located south of Osaka and is accessible by train and bus. Tanabe is a good base for the region. jetstar.com
Alternatively, from Tokyo, ANA flies daily to Osaka’s Itami Airport, Kansai Airport and Kobe Airport. ana.co.jp

When to go
The best times to visit are Spring (March–April) and Autumn (September–November). 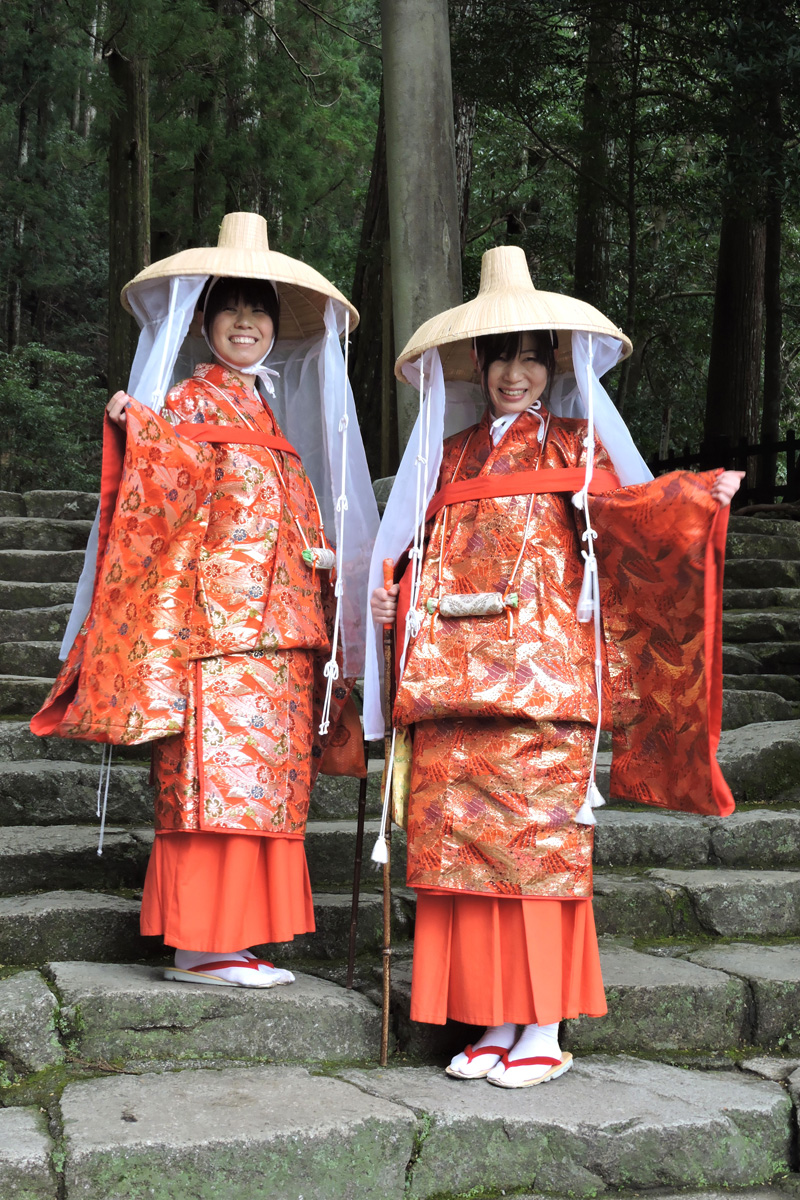