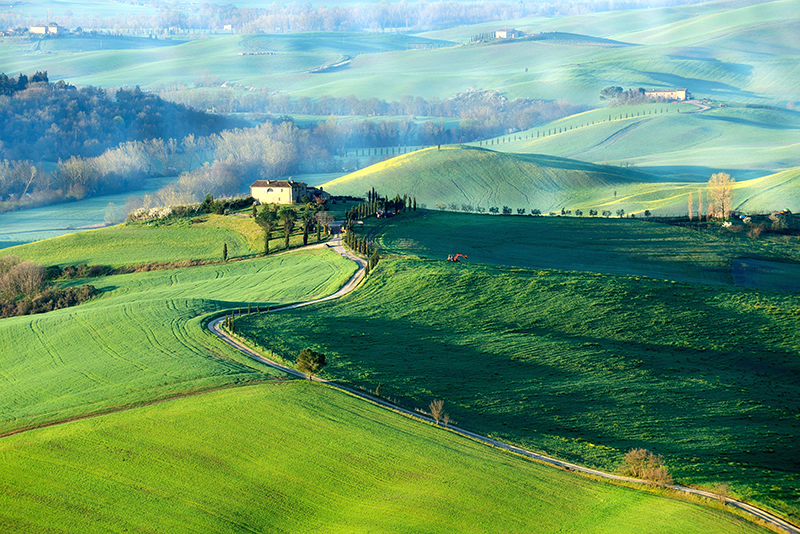 Tuscany isn’t a place that likes change, but it likes to speak to you through its enduring stones – le pietre del tempo, which translates to ‘the stones of time.’ Shaped and moulded by dramatic hilltop towns, the stones are also architectural marvels that embody bold strokes of fortitude and beauty, each layer bearing witness to the region’s passage of rich history. The Etruscans who established the villages of Cortona, Arezzo and Volterra. The Margrave princes and powerful Sienese family who once ruled Siena’s territories with an iron fist.

But the golden thread of Tuscany is its enigmatic hills and fertile valleys; a bucolic dream for painters and poets. Here, first impressions are lasting ones. Drive along the storied routes to the medieval hilltop towns; San Gimignano with its mass of tall towers and Montepulciano, with its palaces, San Biagio basilica and sculptured views. Others bound by ethereal bell towers, a labyrinth of secreted alleyways, and the footsteps of Dante. With this recurrent connection of intimate feelings, you soon realise that the region was kissed by the angels.

Such is the road to Pienza, a timeless landscape drenched in a halo of Tuscan light as it slithers through Val d’Orcia past fields of sleeping sunflowers and lofty cypress; evergreen and silent in the afternoon shadows. A manifesto of loveliness and indulgences that have always haunted and excited those who have visited. 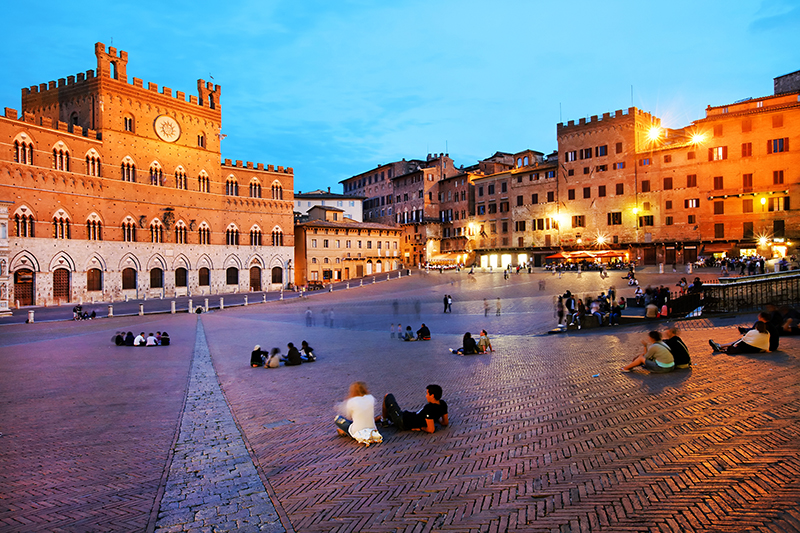 Long cultivated by centuries of art, restrained elegance and hedonistic pleasures born from its gentle sloping vineyards, rambling olive groves, and prized white truffles that lie beneath the roots of ancient oaks and hazel, it would also be unthinkable not to consider Tuscany as a food connoisseur’s nirvana.

In fact, the journey from the region’s fragrant soil to the humble plate is every bit as sensuous as a Botticelli masterpiece; one with a flaxen maiden draped in tufts of pale silver-green branches – and then some.

It was in the shadows of Pisa’s famous leaning tower; just a mere stroll from Campo dei Miracoli where I learned about Tuscany’s famed olives trees; nourished by the rich, patchwork valleys that nestle beyond Orezzo and Siena. My burst of culinary fervour ignited over an irresistible smoked ham prosciutto dipped in Bramasole olive oil at Chiosco di Nonna Rosa. The bottle’s label does not go unnoticed.

‘The Bramasole’ I ask my waitress? “Si, il Bramasole dal film!” she declares as the oil’s silky swirls glisten on my plate. Produced by author, Frances Mayes and named for her illustrious 16th-century villa that once served as a Medici stronghold just outside Cortona, her olive groves like her bestselling books have turned into liquid gold. 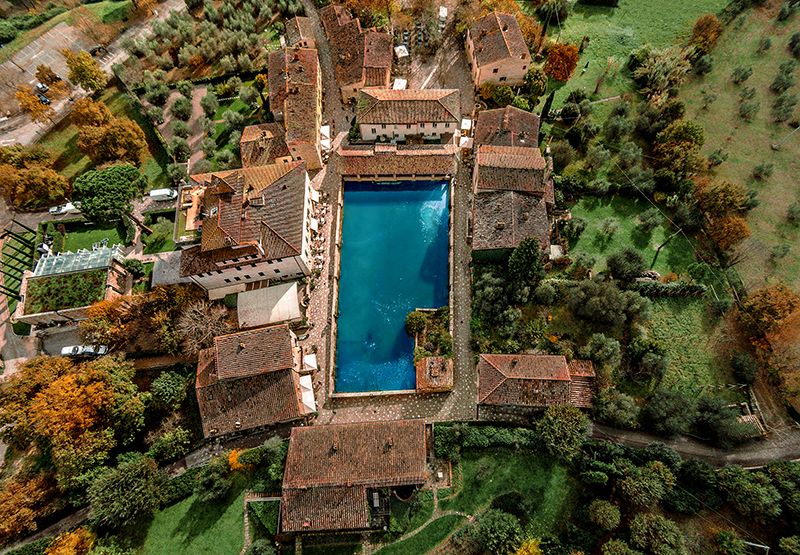 So my itinerary in Tuscany becomes very one-dimensional. I decide to steal myself away from the medieval trappings of Pisa with all of its loveliness, and follow the culinary trail under the Tuscan sun.

A Sample of Toscana

“Taste it,” invites Giulia Bianchi, who offers me a succulent olive picked and cured from one of the trees that stand like pale green sentinels outside her rambling 19th-century farmhouse near Arezzo; a gentrified estate untouched by time and perfumed with wild lavender and rosemary scents. Only the rustling of the leaves from the terraced orchards break the silence – sounds that have changed little since Etruscans first planted their crops.

But this is a region that also inspires artisans. For many years Giulia toiled in Milan’s banking industry until the siren call of retirement in Tuscany unleashed her true passion; slow cooking speciality dishes from ancestral recipes – the venerable link to Italian bonding. 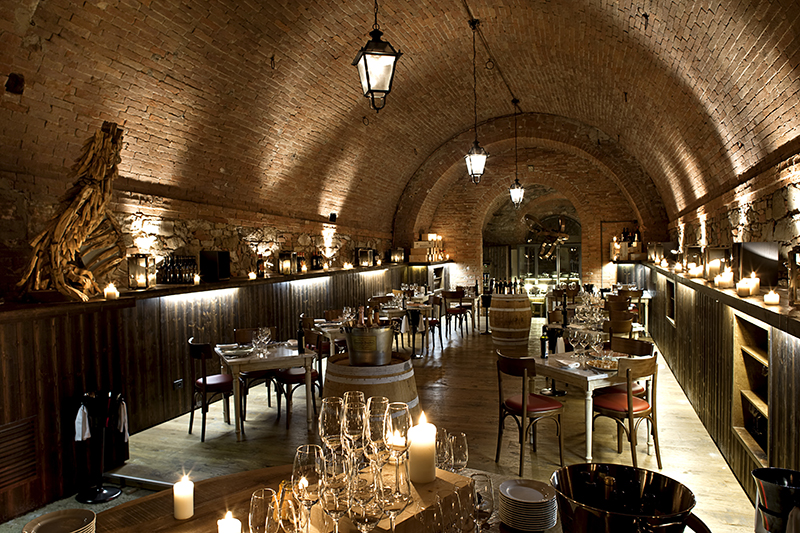 It was over a Tuscan plate of wild boar and a rack of venison with baby broad beans served at La Bottega Del Buon Caffe in Florence where we first struck up a conversation on the importance of foraged food, broad beans and succulent wild game; the pulpit to Tuscan gastronomy. Three days later, she is preparing a similar feast for me and her Italian husband, Paolo, a retired merchant. As an aperitivo, I devour several plump olives with gusto; cold-pressed by stone, and utterly sublime. My exuberance does not go unnoticed. Without a pause to the palate, I savour another sated prize; a sampling of locally-produced Compagnia degli Oliandol, which Giulia drizzles over home-made bruschetta. I am in food heaven.

“Ah, now you understand why Tuscany’s olive oil is so revered in Italian dishes,” Giulia says with a satisfied smile as she watches me devour every morsel. “It’s a refined flavour; almost a religion in every Tuscan cucina.”

So too is Tuscany’s olive harvest, which is always a cause for celebration. Yet the sensibility that pervades the autumn festivities also spring from Tuscany’s russet-hued vineyards; now golden and glorious, as I wind my way south to Cortona.

While the fortress city of Arezzo is renowned for its antiques, jewellery industry and medieval treasures; its architecture and artist Piero della Francesca’s hauntingly beautiful frescoes at the Church of San Francesco – in particular, The Legend of the True Cross – are compositions of illumination to my eyes. 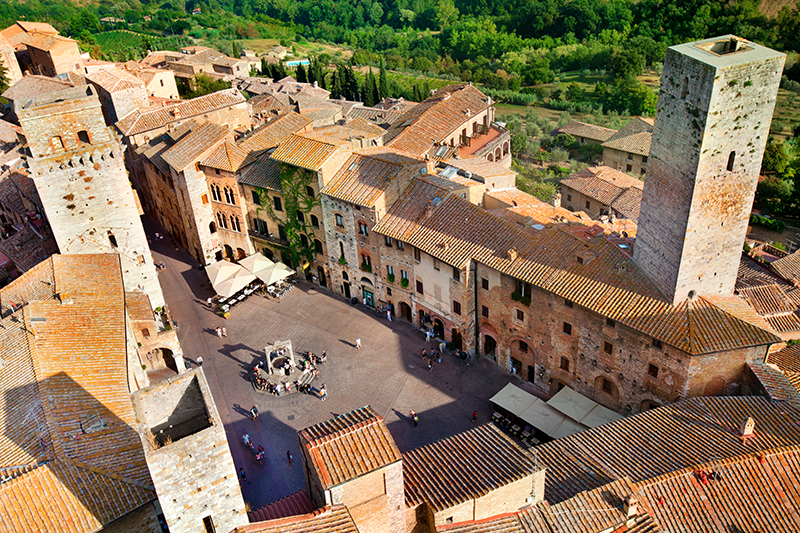 When I arrive in Cortona, I am greeted with hazy views of neighbouring Umbria that extend beyond the city’s red-tiled rooftops and ancient Etruscan walls. Then in the quiet of mid-afternoon, I stroll the maze of cobbled streets; a leisurely choice that makes sightseeing agreeable. I make immediate contact with the city’s cultural doyenne; Museo Diocesano on Piazza del Duomo where Fra Angelico’s hypnotic Madonna and Child with Saints and Luca Signorelli’s Communion of the Apostles whisper to me. A simple blue doorway marks the entrance of Chiesa di San Domenico, the baroque-period church where the artist worshipped and left soft brush strokes above its entrance.

But all of Cortona’s cathedrals are blessed, with its fragile artwork of angels and apostles from the Old Testament leaving a spiritual imprint on all who view them. I then file around the dimly lit altar of Duomo di Cortona where I come face-to-face with the Assumption of the Blessed Virgin Mary who presides everywhere. Postcards and mouse pads in souvenir shops, inside gold lockets – even as an opulent doodle on a paper napkin I spot at Bottega Baracchi, where I slink through its doors for a late afternoon aperitif.

As dusk sets softly and casts an intricate pattern on Cortona’s drowsy streets, I head to Piazza della Repubblica, flanked by a squadron of historic buildings and throngs of tourists. Beneath Town Hall’s clock, I sit on the stairs that fan out into the everyday bustle of its handsome open square. 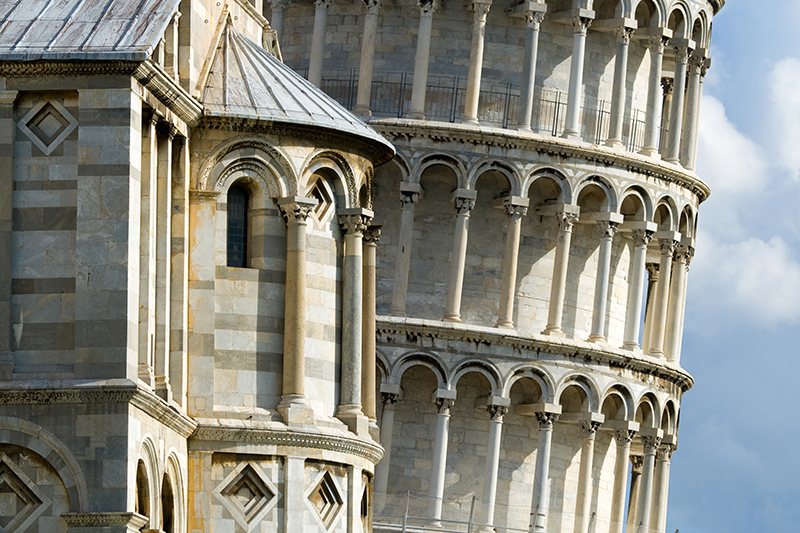 The fountain used for the La Dolce Vita scene has gone, but the wildly overcrowded piazza that defines Cortona’s disposition emits a happy hum from the trattorias serving vino from deep violet grapes; most likely blessed descendants of the spindly vines the Benedictine monks tendered almost a millennium ago.

I cut loose and recharge at Castel Monastero, a restored village transformed into a five-star resort near Siena. Rising from a verdant setting but remaining seductively chic, and helmed by three Michelin-star chef, Gordon Ramsay, Castel Monastero boasts a pedigree that morphed from foundations that date back to the second century; later its 13th-century castle becoming an outpost when territorial squabbles flared with Siena and a country estate for the powerful Sienese family during the height of their rule.

Like much else in Tuscany, or Italy for that matter, everything in Siena centres on history, wine and food. And Palio, a heart-stopping horse race between rival districts that has taken place for the past 400 years in the city’s ancient plaza. Costumed trumpeters, drummer boys and flag throwers add to the pageant’s glory, but it is the climactic showdown with the riders that keeps Siena’s spirits high. But the life of the city is always going on around you. 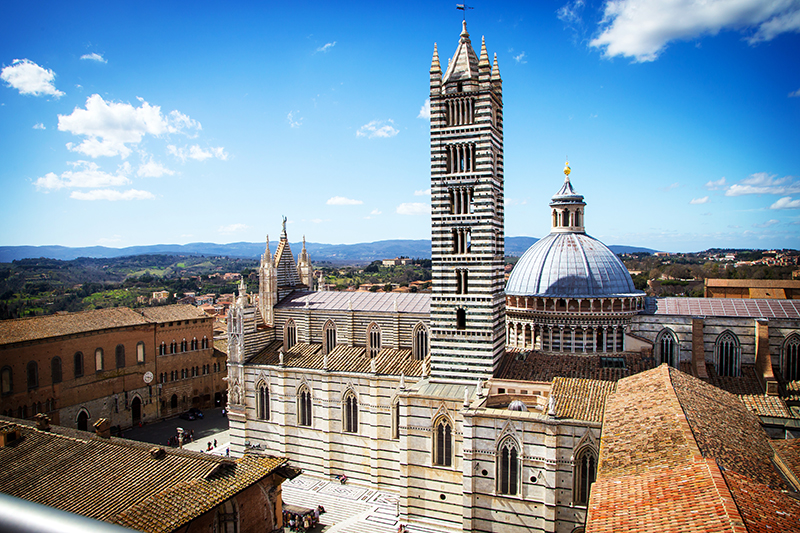 Among the hub of activities that anchors me is Siena’s architecture. The Duomo’s museum which is a veritable treasure trove of Sienese culture, and the confectionary-striped Libreria Piccolomini, a handsome Renaissance-era library built by the Vatican in the 15th century to store Pope Pius III’s private book collection. And the touchstones of familiarity; the narrow streets that slice through its ancient centre where merchants, trattorias, and local landmarks have for centuries inhaled everyday life into the city away from Piazza del Campo.

Yet for all these moments of unbroken Tuscan beauty, nothing prepares me for Caprese, the birthplace of Michelangelo, who still haunts the tiny Tuscan hamlet which lies in the Arno Valley. I poke around a convergence of rustic buildings where his domineering father left an indelible mark in public office; and where Michelangelo the painter drew absolutely no inspiration. It was his work that bequeathed him a universal voice.

“He was a quarrelsome bloke,” says a visiting Brit, who details the annals of his life along with his feud with the other titan, Leonardo da Vinci. Michelangelo did not care, so immersed was he in his work.

But who could argue his genius – each masterpiece an eternal gift born from Tuscany’s heavens that will survive the passage of time. • 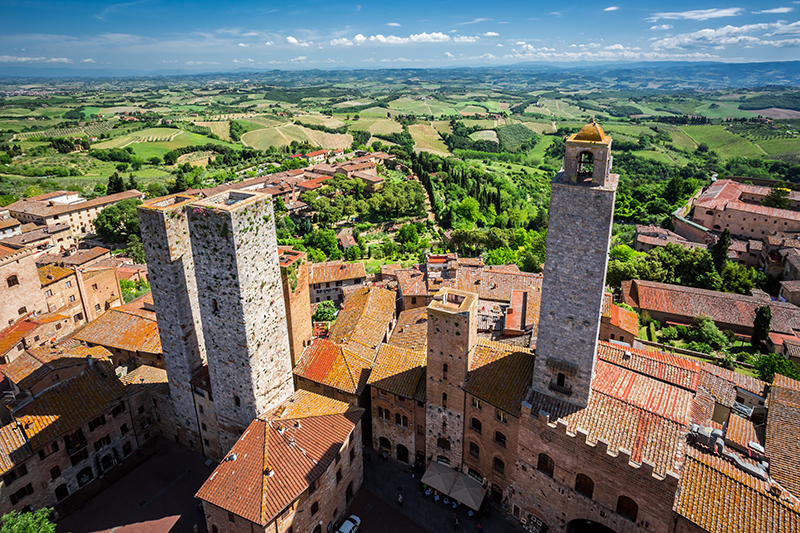 Fly Air France-KLM to Amsterdam or Paris, with connecting flights to Florence and Pisa and codeshare hubs in Singapore and Hong Kong. A member of the SkyTeam alliance, passengers can choose to fly in three classes; Economy, Premium Economy and Business, and accrue frequent flyer points, lounge access and other Air France-KLM and SkyTeam membership benefits. airfrance.com.au
• Hire a car through Alamo: alamo.com