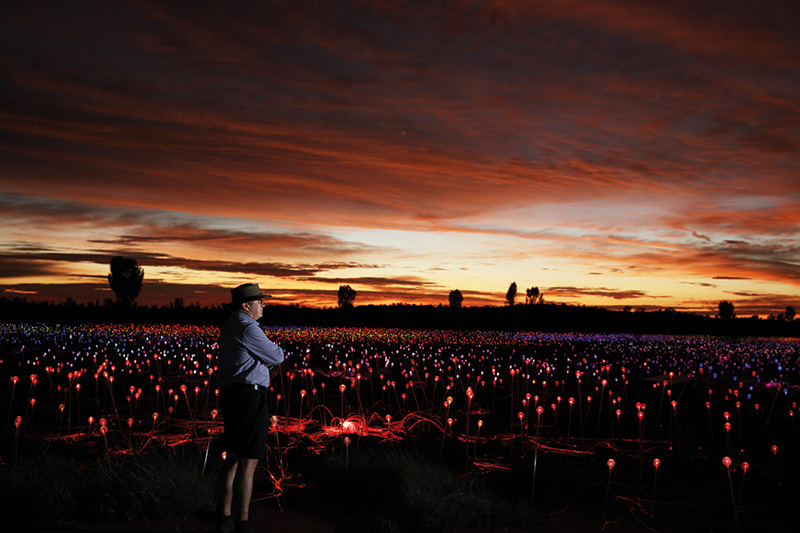 The ground is breathing, like an Aboriginal dot painting blossoming into luminosity. It’s alive, this visual feast, its fibre-optic arteries spread out across the space of four football fields. The multi-hued ground reflects back onto the naturally chameleon-like geological wonder, Uluru.

Out here in Australia’s Red Centre, awe is a constant state of being. So when an idea, an artwork, is realised in a way that not only pays homage to its canvas, but ultimately amplifies the natural intensity that already exists, it is a very special accomplishment indeed.

British artist Bruce Munro wasn’t setting out to change anyone’s perception of Uluru, but in creating the Field of Light – an installation of 50,000 frosted light globes that ebb and flow through a sympathetic desert spectrum of ochre, deep violet, blue and gentle white – he’s certainly created an impetus to go there now.

It’s been a long journey from the spark of an idea, sketched in his notebook in the shadows of Uluru when Munro first visited the Northern Territory in 1992, camping beside “an old banger” of a Toyota Corona. “I never thought it’d see the light of day, or light of night as it were,” Munro says, being that the sketch remained stuck on his studio wall back in the UK where he toiled away as a self-described failed artist. Paint was his medium then, but the concept of light continued to tug at his artistic heartstrings.

Twenty-four years later, his vision has been brought to spectacular life within the grounds of Voyages Ayers Rock Resort for a very special year-long exhibition, which will breathe through the four seasons until 31 March, 2017. 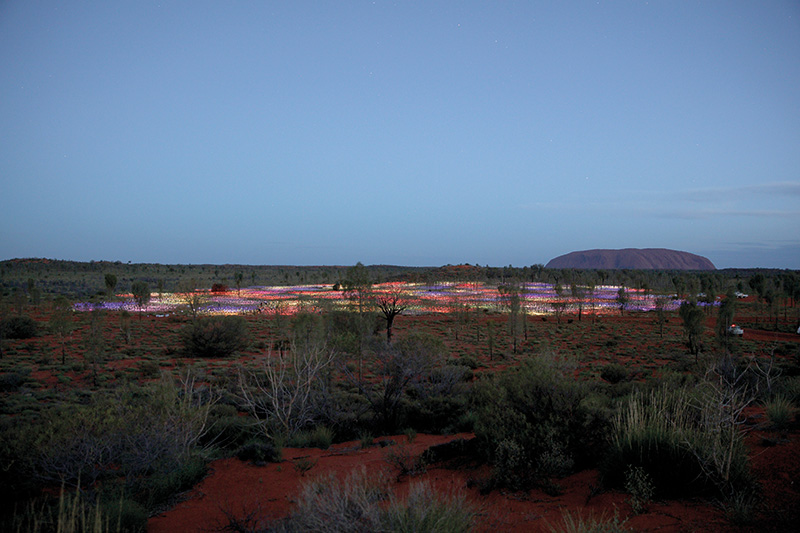 It’s a concept that’s hard to visualise and even harder to photograph, so I’m not sure what to expect when I touch down in Uluru. After a short bus ride from the resort, we stand at a viewing platform taking in Munro’s magnum opus. It begs to be explored, and that’s his whole intention.

“Art is about getting underneath, it’s about getting into the feeling of things,” he says. And after toasting one of Uluru’s unbeatable sunsets with champagne and canapés, we follow the path down into the iridescent field, spread out like a twinkling mini metropolis in the middle of the desert.

As night falls, the full moon seems to open the doorway to the entire universe above us, illuminating a sky uncorrupted by pollution, as we wander through the spindly stems that reach to our knees or higher. Everyone falls silent, speaking feels almost disrespectful. Crouching amongst tufts of spinifex with red sand on my boots, the sensation of being immersed in this creation is unlike anything I’ve experienced before.

Of course, Uluru doesn’t need a headliner to draw a crowd; it’s cultural significance and dizzying sandstone beauty has long been a spiritual pilgrimage for travellers from near and far. The Field of Light is the dusting of icing sugar on top of an already sweet escape.

The traditional owners of this land, the Anangu people have given it the thumbs up too, calling it “Tili Wiru Tjuta Nyakutjaku” in local Pitjantjatjara – or “looking at lots of beautiful lights” – and Bruce stresses he wasn’t trying to overbear or overlay a concept. “It was just me saying thank you to Uluru,” he says. 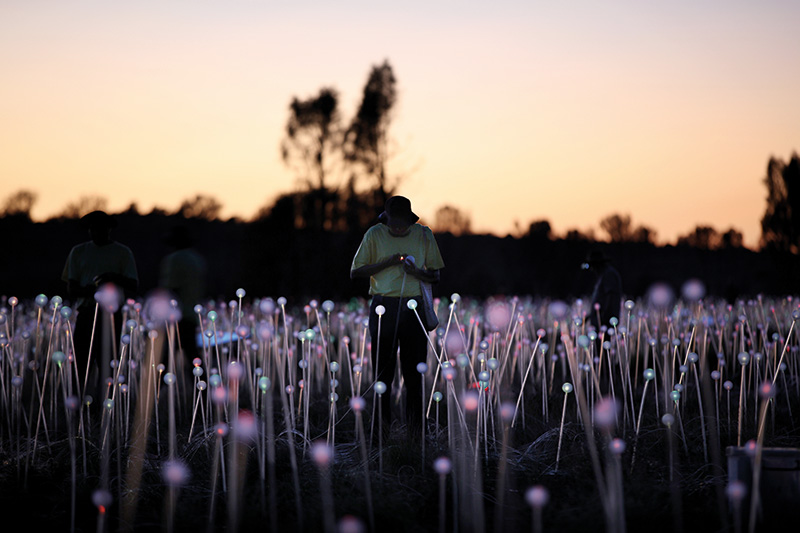 After our walk through the installation, our senses are heightened further as we sit down to a buffet dinner under the stars, with the spread contradicting a kitchen operating without electricity or running water. The menu for A Night at Field of Light is peppered with bush tucker ingredients like lemon myrtle, native thyme and Quandong and complements the resort’s other open-air dining experiences Sounds of Silence, and high-end Tali Wiru.

While Field of Light has had many successful iterations before, starting in Munro’s very own backyard and eventually taking over parks, urban squares and rooftops in the UK, US and Mexico, this homecoming display – “in a sense a closing chapter” as Bruce puts it – is the largest. It’s also the first time it’s used solar power, a necessity given its location.

Transporting the installation was a feat in itself – Qantas freighted the 15-tonne extravaganza, including the 60,000 delicate light stems (10,000 in reserve) more than 19,000 kilometres over 32 international and domestic Australia flights.

The next morning, I return to see the delicate nuances of Field of Light fade away as the day leaks into reality, providing an entirely new perspective. Resembling morning dew blanketing the grass in front of the Rock, the frosted bulbs look naked once the heat (and the flies) arrive.

I head into Uluru-KataTjuta National Park for a closer look at Munro’s muse, hiring a bike and cycling the 10-kilometre Base Walk. I explore the cracks and crevices of the magnificent monolith, seeking refuge in the shade of the Mutitjulu Waterhole and Kantju Gorge. 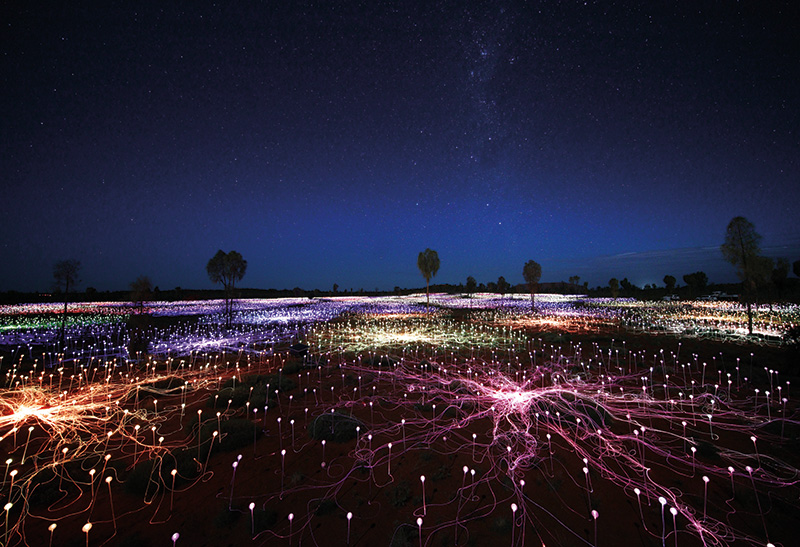 “My name’s Pamela, and I live next to the Rock,” our art teacher back at the resort says as she sits on the ground and begins to tell us all a story. She has long, slender fingers responsible for some of the artworks I’ve spotted in the gallery, and with knowing hands she relays the story of Kuniya the python woman into a circular pit of red sand. Then it’s our turn, faced with a blank canvas and a chance to tell our own story through dot painting.

It’s experiences like this that strengthen the connection to Uluru and transform my visit from a once-in-a-lifetime experience to a remember-for-a-lifetime one.

In juxtaposition of the 60 million-year-long history of Uluru, Field of Light will survive only in the memories of the people who see it first-hand, something Munro hopes will open people’s hearts just a little more.

“I got a feeling as a young bloke that inspired me to pass it on, and hopefully it inspires you to pass it on too.”

Getting there
Jetstar flies direct from Sydney and Melbourne to Ayers Rock Airport. jetstar.com

Where to stay
Voyages Ayers Rock Resort provides a variety of accommodation from the premium Sails in the Desert Hotel, to the Desert Gardens Hotel, self-contained Emu Walk Apartments, Outback Pioneer Hotel and Lodge, and Ayers Rock campground. ayersrockresort.com.au

Tours
• A Night at Field of Light includes an introduction to the artwork by a host, sparkling wine and canapes at sunset, extended time to immerse in the installation and a three-course buffet dinner. There is also an option to arrive by camel or helicopter. Pre-booking your Field of Light experiences before arrival is strongly recommended. ayersrockresort.com.au
• AAT Kings’ Sunrise Field of Light tour. aatkings.com

Other recommended experiences
• Maruku Arts dot painting workshops. ayersrockresort.com.au
• Outback Cycling in Uluru-Kata Tjuta National Park hire bikes and helmets for a self-guided ride around the base of Uluru. outbackcycling.com 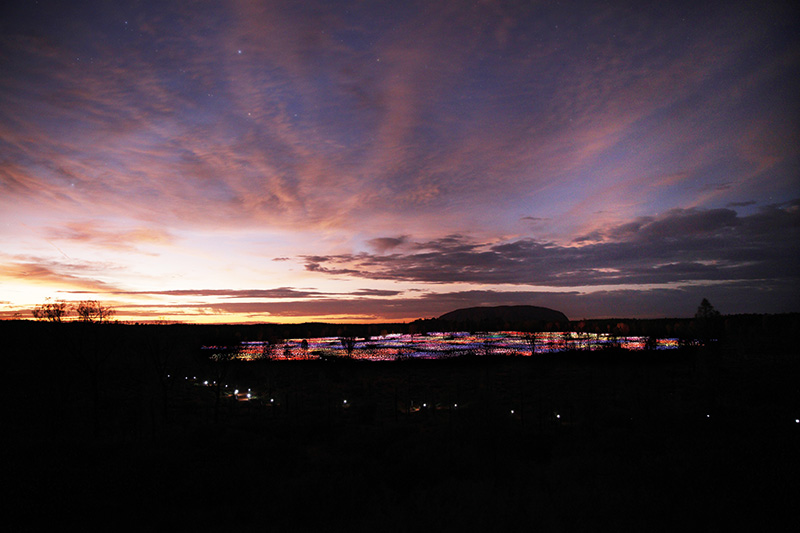