Nearly 1300 years ago, the Japanese discovered Kinosaki Onsen’s magical, restorative waters. Now visitors are invited to shed their clothes and take a dip. 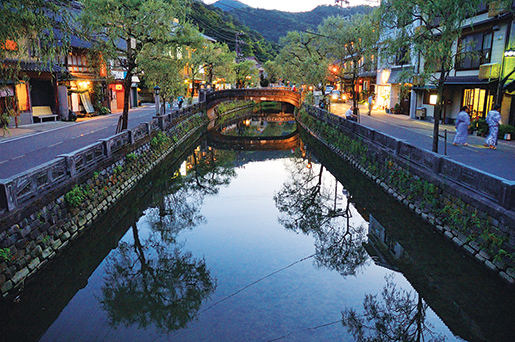 The idea of wearing just a bathrobe while on holiday certainly promises a relaxing time. But it’s a little odd. Especially when this minimalist outfit is worn for strolls along the main street, meals in busy restaurants and even drinks in local watering holes. Yet in Kinosaki Onsen, two-and-a-half hours from Kyoto on the north-west coast of Japan’s Honshu island, this practice is almost mandatory.

Bathing is a serious matter in Kinosaki Onsen, the ‘onsen’ part of its name meaning hot spring or bathhouse. In glitzier onsen towns, each venue tries to hold onto visitors and their cash. Here a more communal mindset welcomes visitors as a collective, rather than competing for their attention. Although there are private bathhouses, it’s the seven public ones which draw the crowds. Since you are encouraged to visit them all, it makes sense to keep only your robe on. And everybody does, as they have for centuries.

Water under the bridge
Ancient mythology tells of an injured stork bathing its wounds in marshy ground that later became Kinosaki Onsen. In 717AD a priest founded the settlement when, after 1000 days of praying, he discovered water springing from the ground. It’s been all about the effervescent, healing local waters ever since.

The low-rise town rambles along the Otanigawa River, which flows down from nearby mountains to the coast just 20 minutes away. Little stone bridges crisscross the water’s flow and, with cherry and willow tree-lined walkways and buildings running along both banks, it forms the living artery of the streetscape. The river’s soothing, low-pitched bubbling sound – reminiscent of a day spa water feature – is a constant soundtrack.

Strolling is the official form of transport and spring water footbaths are strategically placed by the roadside to give your feet renewed vigour. Dotted along the streets are drinking fountains serving the town’s prized nectar. Be warned: it’s warm and salty. Cafés sell raw eggs to boil in nearby wells of piping-hot spring water.

Hot ticket
From daybreak when the first public onsen opens, until nearly midnight when the last one closes, bathers fill the streets as they hop between the bathhouses. Dressed in colourful, tightly-wrapped yukatas, sturdy kimono-style robes, they create a comical sight. Added to the amusement, everyone wears ungainly wooden sandals – imagine a breadboard with straps – which clickety-clack along the paved streets.

On my first night, even though my lodgings provided a tasteful outfit, I resisted the dress code in public. But I threw away my inhibitions on day two, embraced the freedom and never looked back. I felt silly thereafter not wearing my grey patterned robe and clunky clogs. 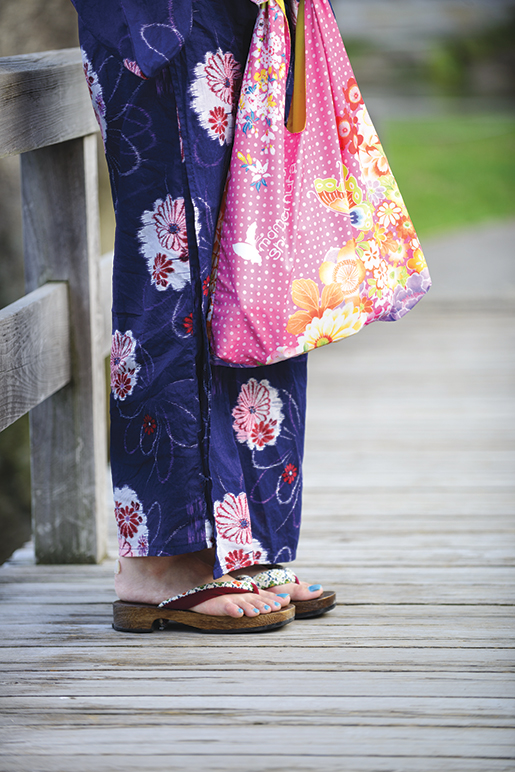 Once inside an onsen, a precise etiquette is followed. Men and women bathe apart. Valuables are stored in lockers. Robes stay in the changing rooms. So, when entering the bathing area, you are naked – no exceptions. Lowering my exposed body into a scalding bath, full of unclothed Japanese men, was a challenge. But just as the body adapts to the heat, you soon forget the nudity and relax. After the fourth bath of the day, it’s second nature.

Every hot spring is subtly different, promises different forms of luck and all can be visited by buying one multi-entry ticket. At the far end of town, Mandala-yu offers mountain views and grants one wish. Ichi-no-yu has an outdoor bath enclosed in a rock cave and brings good fortune. Smaller Yanagi-yu is just one deep wooden bath and helps with fertility. It was my favourite as an adjacent kiosk serves ice-cold draught Kirin beer in one-litre mugs for post-bath refreshment.

Surf, turf and mirth
With proximity to verdant farmlands and vibrant fishing communities, Kinosaki Onsen is gourmet heaven, especially since the best diners are all on one street. Its most famous dish, freshly landed in the winter months at nearby Tsuiyama Port, is Matsuba crab. A festival takes place in November in honour of this eight-legged delicacy. Visit then and every corner of the town has a crab stall. Or dine at Inaba Sengyo restaurant where two plastic crabs, as big as cars, hang outside and make it hard to miss.

Although not a regional speciality, the fresh seafood at Orizuru sushi bar is the best I’ve tasted. It’s a tiny strip of a room and a family affair. Father and son − master and apprentice − man the kitchen, while the ladies work the floor. Language barriers present no problems. Simply point to the seafood which takes your fancy and it is masterfully prepared under your nose.

Owing its heritage to the land, rather than the ocean, soba noodles are a local favourite all year around. Masuya café is renowned for its homemade buckwheat noodles, served with toppings of wasabi, leek, raw egg and grated yam. Slurping, like a toddler eating tinned spaghetti, is all part of the fun.

Nearby cattle farms produce Tajima-grade beef, the most revered in Japan. Unlike in Australia, where leanness reigns supreme, the best quality cuts have the highest levels of marbled fat. Since fat melts at a low temperature, it literally melts in the mouth. A fun way to sample Tajima is at Naru grill where you cook it yourself on a table-top barbecue. As the fat drips onto the red-hot coals, it’s a smoky spectacle.

Wash it all down with local Gubigabu craft beer or Kasumi Tsuru sake at the welcoming Pub Hananoya. Owner Yoshiko Funatani is an obsessive Anglophile, so it’s a curious blend of Union Jack flags, Beatles’ memorabilia and Japanese knick-knacks. Western tourists are still rare commodities, so expect plenty of questions and lots of giggles. 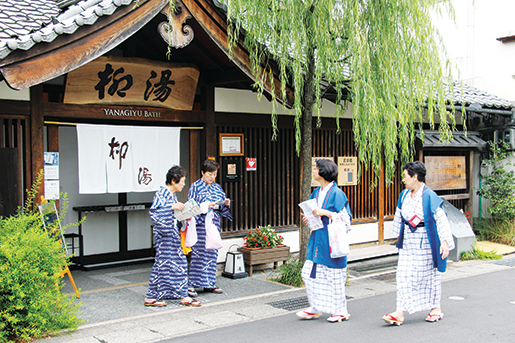 Sleep like a log
True to its old-fashioned nature, accommodation is mainly in ryokans, traditional Japanese guest houses. Historically, these were simple roadside inns, with communal facilities where travellers shared tales with the host. This spirit of hospitality is still alive and, despite resisting the big chain hotels, the level of luxury has markedly risen.

Mikiya ryokan is centrally placed on the hot spring parade and guests have stayed here for three centuries. One of Japan’s most celebrated authors, Naoya Shiga, recuperated here after a train crash injury and returned countless times. In 1917 he wrote the classic At Kinosaki which catapulted the town to new heights.

The main building, made of wood and paper, is a modest 87 years old, as fire destroyed the original. More contemporary wings were added during a recent refurbishment. From the main lobby and lounge area, styled like a Scandinavian architect’s office, the intricately-designed garden provides a soothing backdrop.

On arrival, guests are given two yukatas: one for parading the town and a lighter version to wear privately. Bedrooms are laid with woven tatami mats made from rice straw and you pick the room size based on the number of mats. Throughout the day, comfy futon beds are spirited away to make space to lounge in. Each evening the beds magically reappear, laid out for a tranquil night’s sleep.

Breakfast, served in private booths with discreet, sliding paper doors, is a highlight at Mikiya. It’s hard to believe how many different dishes appear. I counted 17. Fish, eggs, tofu, beans, soup, rice, salads and picked vegetables are all thoughtfully presented to form a balanced, healthy start to the morning quite unlike bacon and eggs. And you’ll need it. Bathing all day is harder work than it sounds.

Kinosaki Onsen is easily accessed by train from Osaka or Kyoto (direct, about 2.5 hours). Alternatively, you can fly from various airports in Japan to Toyooka and transfer by bus (30-minutes).

Qantas and Japan Airlines fly direct to Tokyo from Sydney; Jetstar fly there from Melbourne, Cairns and the Gold Coast. From central Tokyo, the ‘shinkansen’ (bullet train) leaves every 5-10 minutes and takes around 2.5 hours to either Osaka or Kyoto.
•    Qantas: 131 313; qantas.com
•    Japan Airlines: jal.co.jp/en
•    Jetstar: jetstar.com

Where To Eat & Drink