Flying in over Brussels at dawn, over sites that connect the Australian Remembrance Trail, the landscape is close and small-scale. And green, so green for early summer. Under these grey skies and on similar cold mornings 100 years ago, 46,000 Australian soldiers died on the Western Front in just two and a half years.

The Australian Remembrance Trail links the most significant sites for Australians along 115 km of the Western Front: battlefields, cemeteries, memorials and museums. It runs from Ypres in Belgium, through Fromelles in northern France to a cluster of sites around the river Somme such as Pozières, Amiens and Villers-Bretonneux. It can be walked and ridden in places: quiet ambles through serene countryside are a perfect means of contemplation. What I’m about to do is tourism, but of a very different kind. 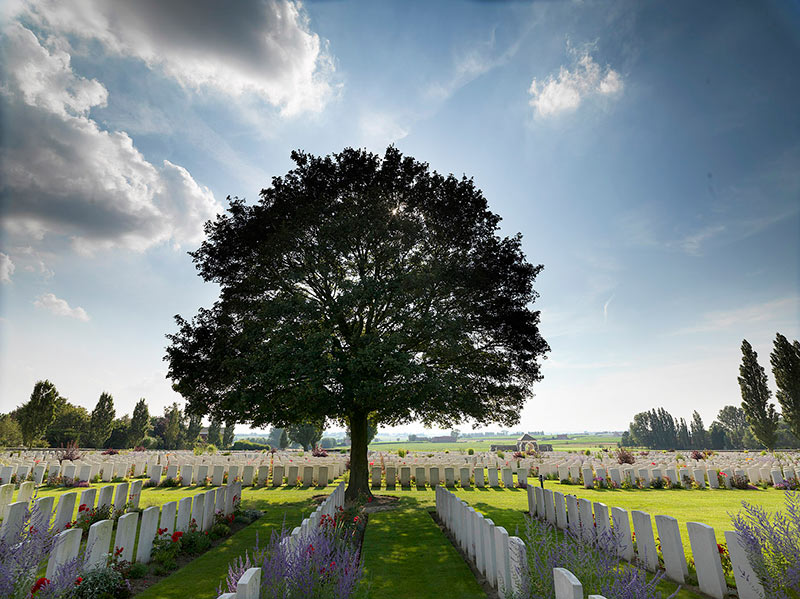 Grisly reminders
In Dutch-speaking Ypres, I first encounter the conundrum at the heart of these places: how to feel the solemnity of the Menin Gate, the awe of the gigantic medieval Cloth Hall, pounded into gravel and painstakingly rebuilt? How to understand the savagery of a conflict that introduced poisonous gas and flamethrowers to warfare?

And how, in the course of the same day you are told these things, to accept the extraordinary hospitality this town has to offer? For Ypres is a quintessentially European village – cobblestones and a chill in the air, the delights of chocolate, waffles and beer (Belgian beers are served in their own decorative glasses, and typically weigh in at 8 to 11 per cent alcohol). 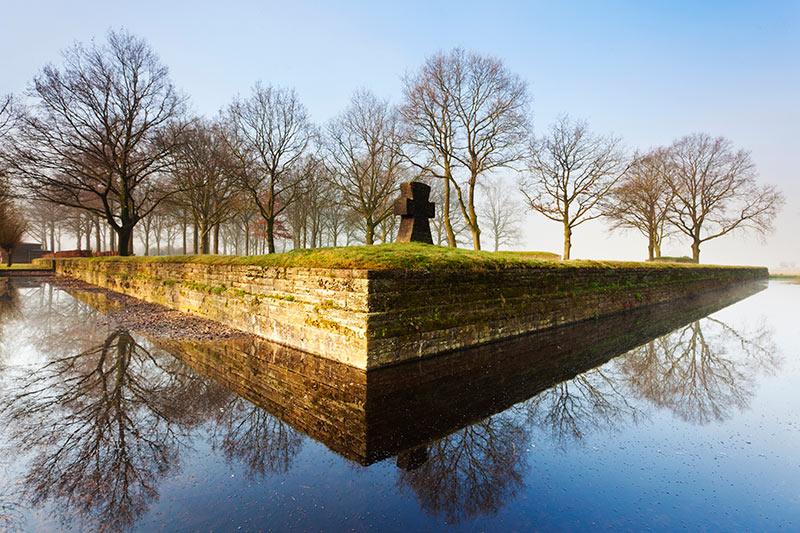 The farmers have lived with this legacy all their lives. They still recover shrapnel and live ordnance, known as the ‘iron harvest’. And human remains still emerge, at an average of a body per fortnight even after a hundred years, so massive was the slaughter that occurred here. The week before our visit they found 43. 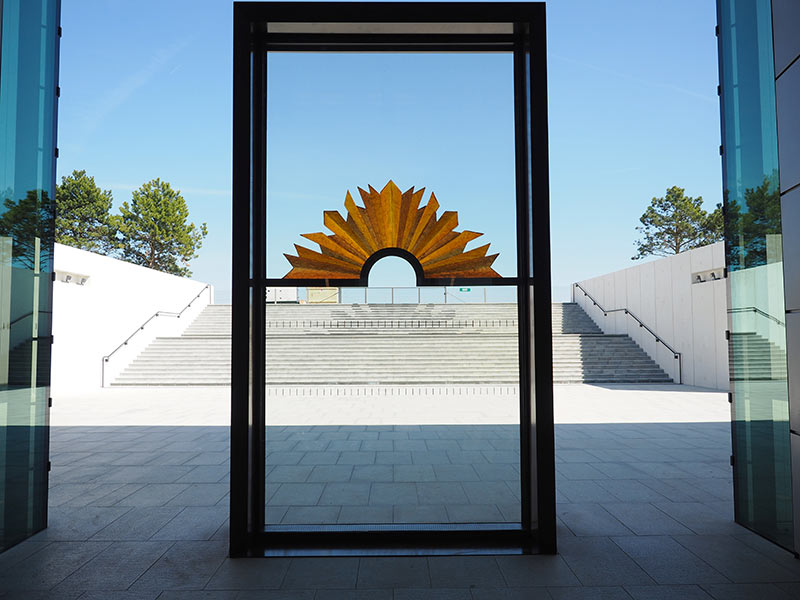 Haunting countryside
Some are hasty burials, dug by friend or foe in the breaks between fighting, but others are ‘lost’ bodies that disappeared in shelling or collapses. The deceased are all identified by their country and given a formal re-burial. But only Australia pays for DNA analysis to identify individuals.

Walking in the sun one afternoon, I picked up a belt buckle beside the road. Shock and sadness coursed through me: not knowing what to do, I placed it back in the sunlit grass. 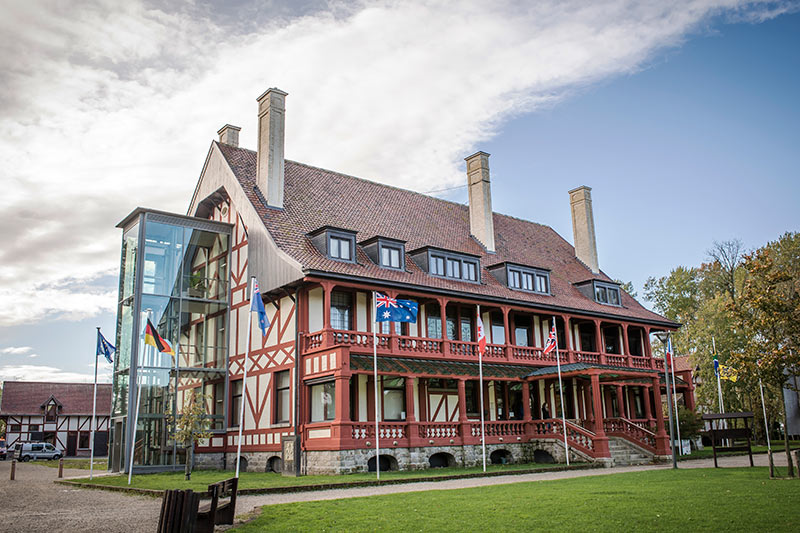 Landscape mends but scars remain
Wreaths are big business in Ypres – you often see people carrying them around in flatpacks that look like pizza boxes. The Last Post ceremony is held every night at the Menin Gate on the outskirts of Ypres. Cadet soldiers form a guard of honour. In good weather thousands of people turn up, the sharp salutes of the military answered by a peculiar crowd salute of raised mobile phones. November 11 this year – the centenary of the Armistice – will be among the biggest crowds ever. 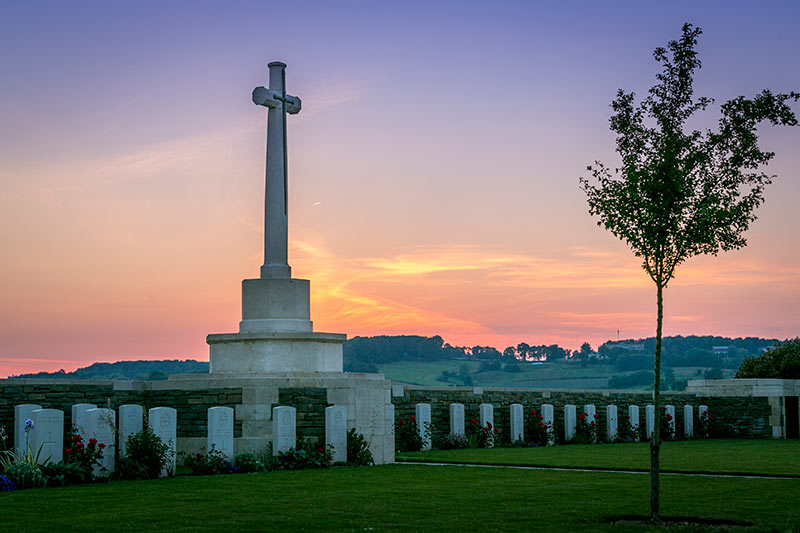 Finding peace, post-war
Outside the town are the craters that mark the gigantic underground explosions at Hill 60 and The Caterpillar. Now they’re peaceful places: Caterpillar Crater in particular is enormous and perfectly round, framed by green forest and full of birdsong. The Allies, led by Australians, buried 25 huge mines under the Messines Ridge but only 19 detonated at the time: at a cost of 10,000 to 15,000 German lives.

The battles of Menin Road, Polygon Wood and Broodseinde happened in rapid succession between 20 September and 4 October, 1917. Together they’re known as the Third Battle of Ypres. 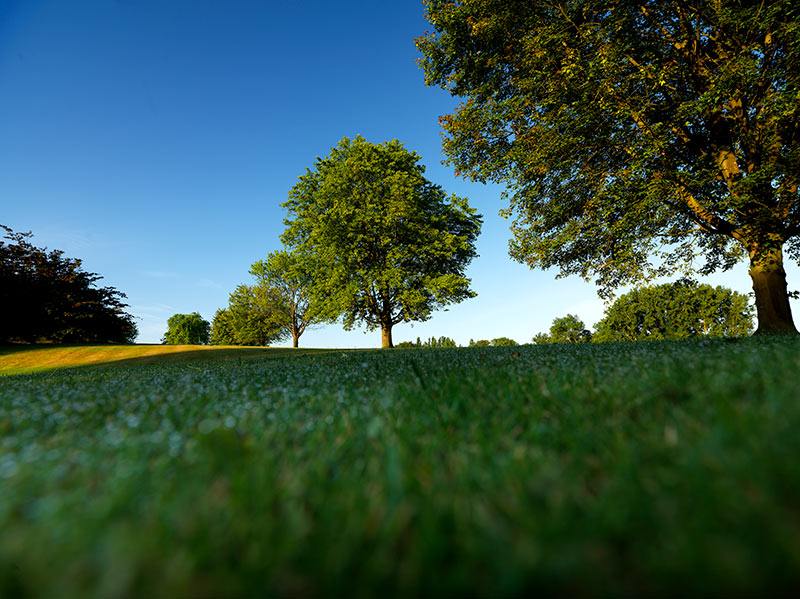 Of rifles and revolvers
Polygon Wood is now a forest of straight green trees. Back then, it was a muddy, blasted landscape with no greenery whatsoever. It’s almost impossible to relate to the photographs. But the land in the woods is very raw: you can still discern trench lines, and there’s a ruined bunker known as ‘Scott’s Post’ with a clearly visible shell impact in one wall, sitting abandoned in a quiet corner of the forest.

Much is made of the idea that the Western Front was the beginning of industrialised mass slaughter, but Polygon demonstrates how intimate the killing was. Trench to trench and eye to eye, with rifles and revolvers. These were global exchanges of power, gigantic shifts in the balance, yet they came down to a few metres of mud. How, you wonder, does one boy bayoneting another boy in the mud amount to geopolitics? 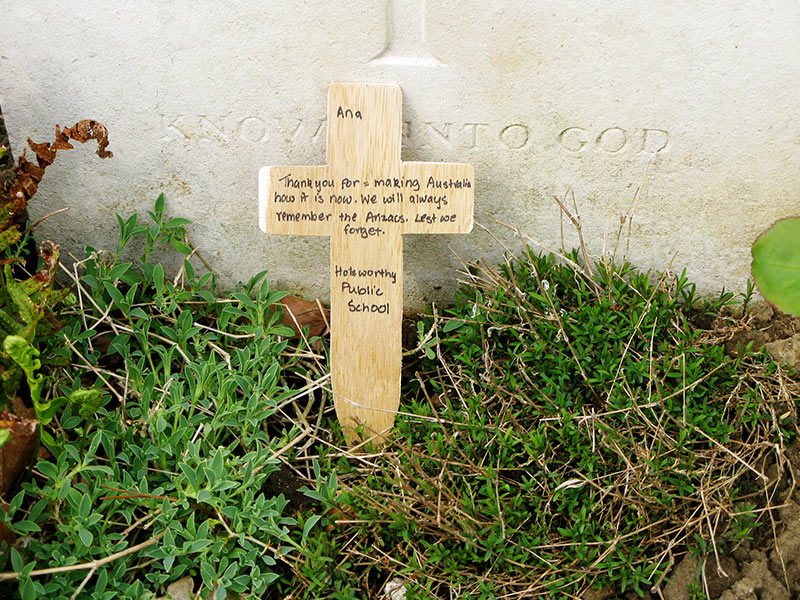 One solemn step at a time
Walking out of the woods, the sky rumbled to a deafening roar. Three jet fighters slipped low through the air, followed by their sound, mocking the history of small-scale brass-and-timber fighting below.

The trail heads steadily south, following the frontlines. At the site of the disastrous battle of Fromelles, where Australia lost 5533 young men in one night, a mass grave was discovered in May 2008. Two hundred and fifty bodies were carefully removed and analysed, then reburied in a new Commonwealth War Grave.

Some could not be identified at first, but the work goes on: nine successful identifications have been made through DNA this year. Men fought and died here under false names because they were too young (or even too old) to enlist. A 47-year-old William John Howard of Yambuk, someone’s ‘Uncle Bill’, is buried here, but under the name ‘Private Morley’. 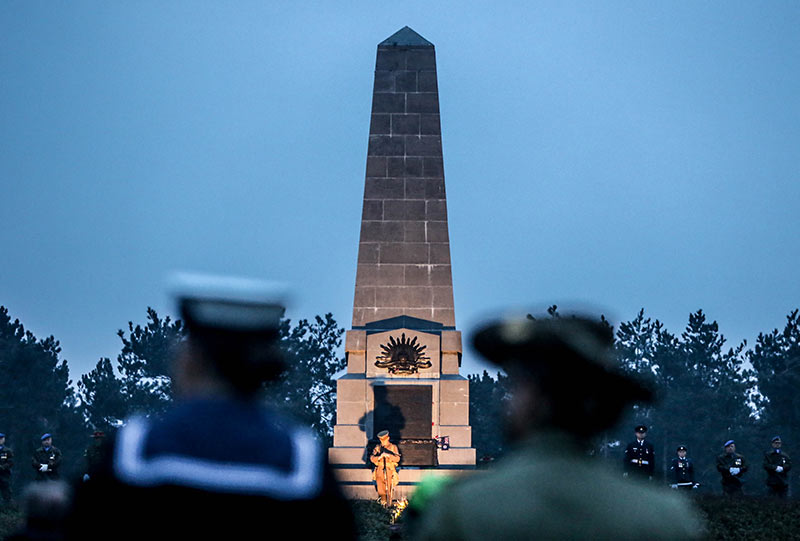 Monumental memories
In the Somme Valley, deeper into the French countryside, there’s a graveyard just outside Pozières, the site of 23,000 Australian casualties. In the distance, it’s so thick with white headstones that they form another patch – a white one – in the landscape, along with yellow canola, green pasture and brown freshly turned soil.

About 3500 churches were destroyed by bombardments in France in the Great War. The glorious Amiens Cathedral – the tallest in France – was spared only by direct Vatican appeal to the Germans. By then, despite elaborate sandbagging by the Allies, it had been hit three times: one shell broke through the roof and fell 42 metres to the floor, but didn’t detonate. 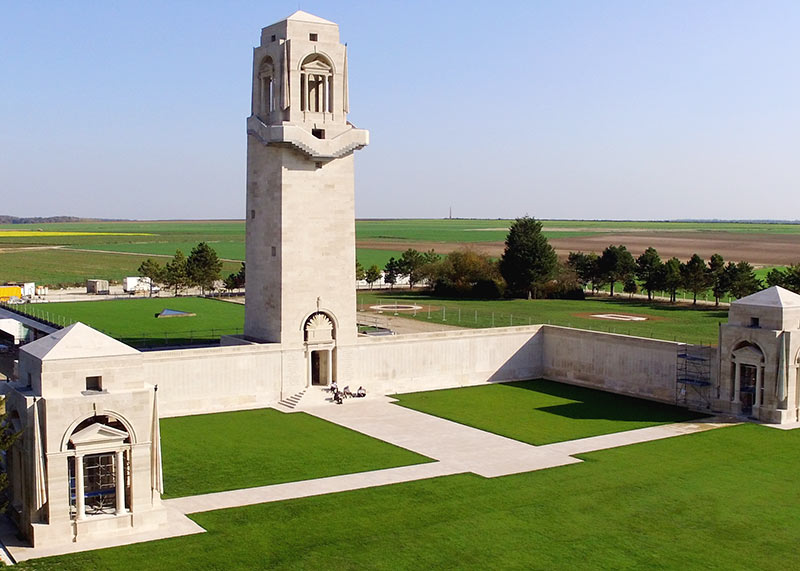 The walls can talk
The new Sir John Monash Centre (SJMC), near Villers-Bretonneux, is built behind and under the original 1938 war memorial. It’s invisible from the entrance, despite being three stories high. The site is a battlefield: 234 kg of live munitions were excavated when digging out the underground parts of the centre.

To enter, you follow a downward-sloping path around and behind the original (1938) memorial tower. The path is designed to mimic entering a trench, and the walls talk. They’re covered in inscriptions and sometimes there are even speakers in them. 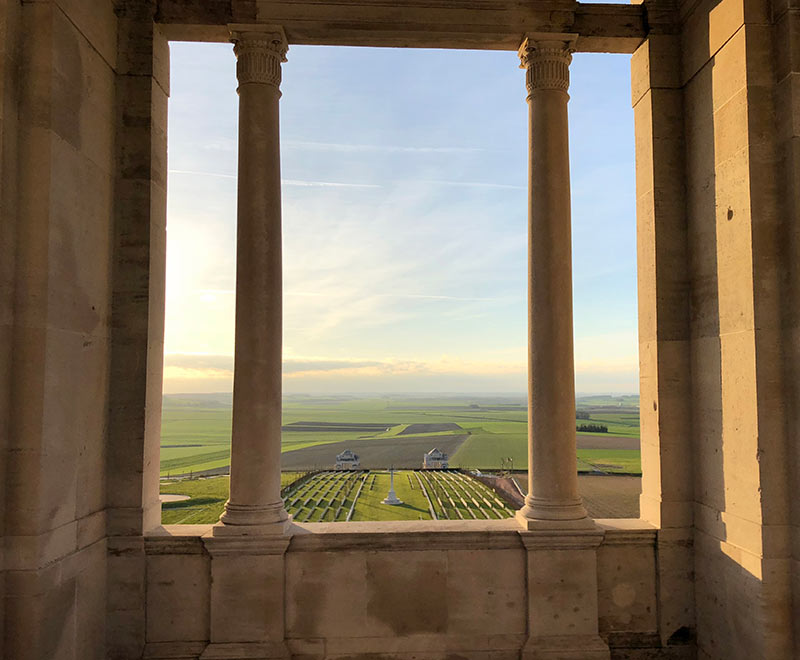 Room to breathe
Inside, Australian timbers are showcased throughout. There’s a high design ethic, natural light and large, breathing spaces. A semi-circular arc of galleries winds around a central theatrette. The centre’s not artefact-based, but is a ‘digital immersive experience’, meaning you’re following a self-guided app and mostly sealed off from other people; closed in with the material by your headphones. The physical footprint of the centre is limited by its hiding-place in the landscape – but because it’s digital and not physical, the exhibits can be loaded more deeply over time. 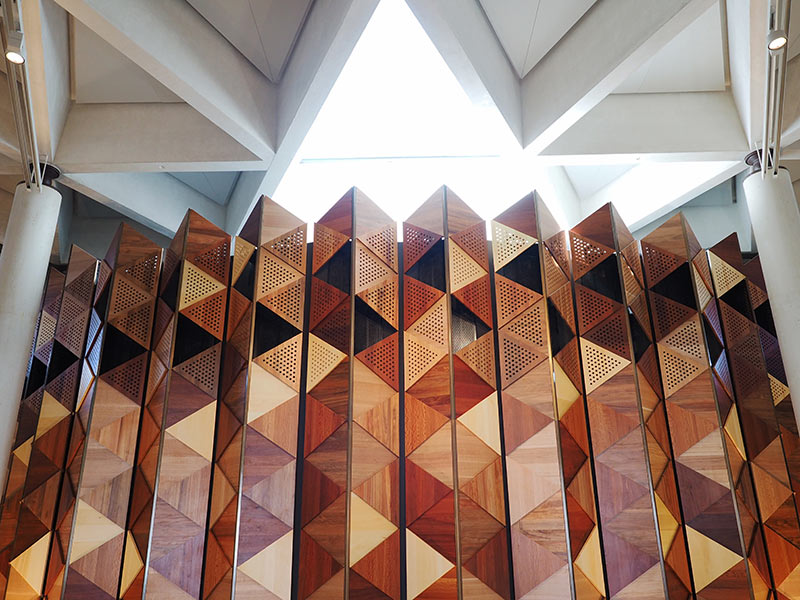 Centre of controversy
There’s been controversy over the reported budget of $100 million (a figure disputed by its administrators) to build the Sir John Monash Centre, in light of what that money could buy to support veterans’ mental health. But it’s an extremely moving experience, which finishes with a ‘reflective space’ at the end of the galleries. People do come out very affected, according to staff, and have been known to hug them at the end. 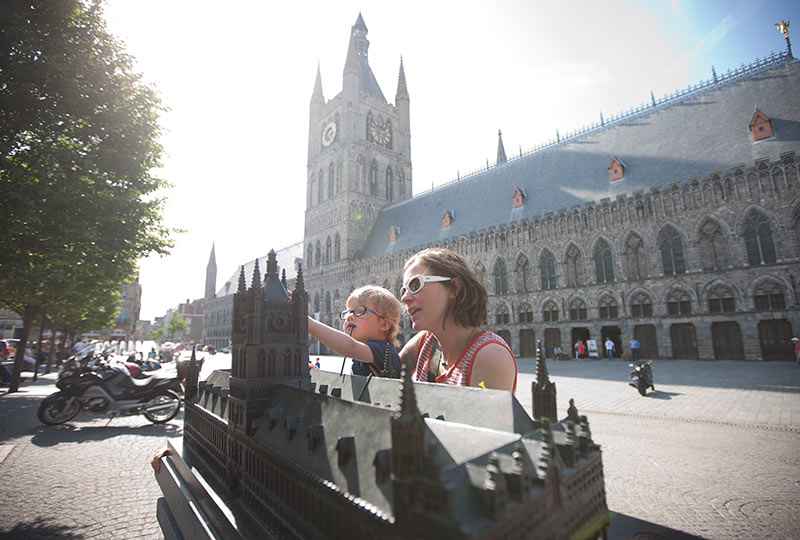 Living with the legacy
The nearby township of Villers-Bretonneux explains the reverence for Australians in this part of the world. Australia lost 1200 men saving this village from the Germans, breaking German morale in the process. Victoria’s children then raised money to help rebuild the place. There’s a massive banner in the schoolyard that says “NEVER FORGET AUSTRALIA”. How many nations currently involved in overseas wars could expect a century of gratitude from the locals? 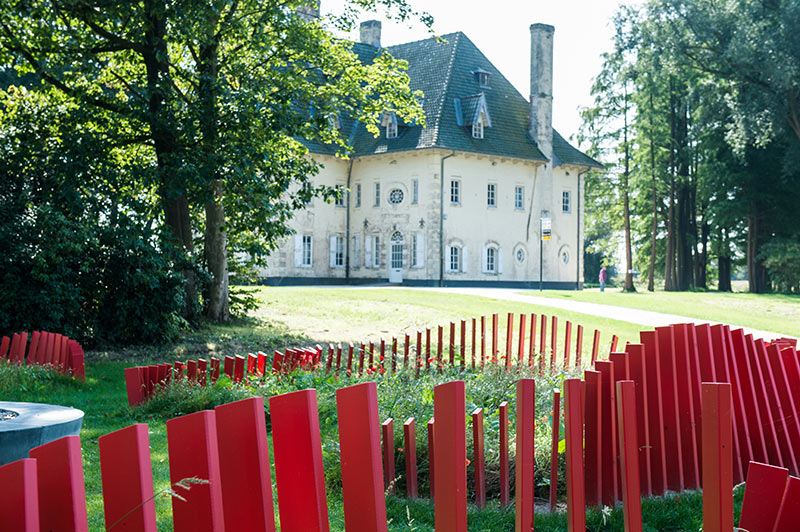 Lest we forget
In photos of the Western Front there are certain constants: the foreground is mud. There is carnage, stunned faces in the middle ground, and the background is bleached sky and the shredded sticks of trees. But to stand on this ground in late April is to see the greens and yellows of young wheat and canola, to hear the whispers of tall forests. The sky is often clear and blue. You have to actively engage the imagination to understand how bleak this place must have been. 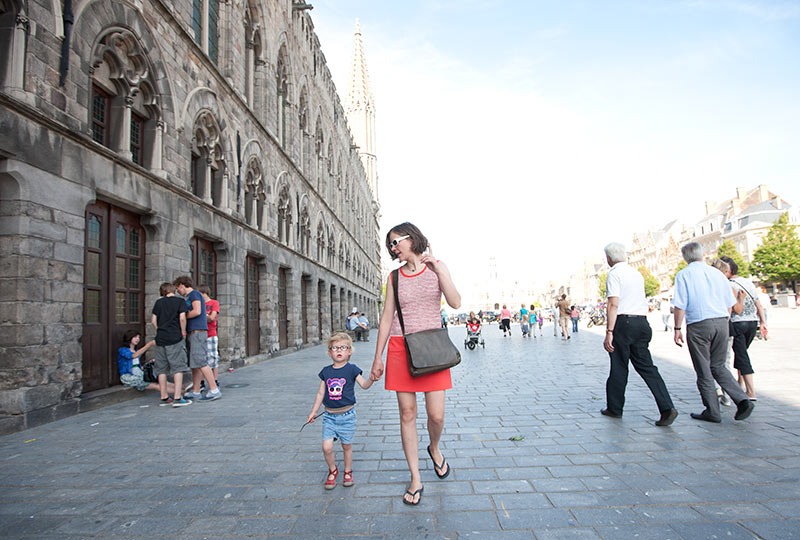 Sepia-toned tourism
That’s the curious dichotomy at the heart of tourism here: sepia and glorious colour. It’s sombre and it’s delightful. It’s the crushed and pounded remains of an empire amid some of the world’s most breathtaking architecture.

I asked our young guide, Simon, why he loves guiding tourists through these places. He grew up, like many Belgians, within sight of a war cemetery. He told me he was motivated by Australian and New Zealand travellers saving up and travelling halfway around the world to pay homage. “It’s not about getting people to see their relative,” he said of the graveyards, “but getting the relative seen. Knowing from letters how much that soldier’s mother loved him.”

The last survivors of these battles died some time ago. There is no living memory now. We’ve moved into a new era, and journeys like this one will determine how we remember. 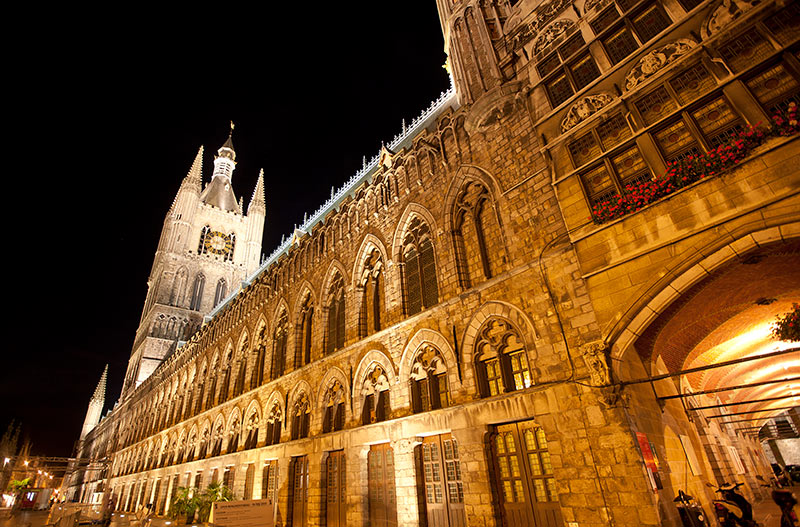 TRAVEL FACTS
Getting There
Cathay Pacific runs regular flights from Sydney, Melbourne and Perth to Brussels with a stopover in Hong Kong. Brussels is the ideal starting point for a journey along the Australian Remembrance Trail, though you could also start in Paris and head north. cathaypacific.com

Getting Around
Distances are short along the Trail. You could hire a car, or even cycle some sections. But do consider hiring a guide, especially around Ypres or doing an organised multi-day tour (see below). They’ll research your family member ahead of your arrival, they’re licensed and they’re passionate. Recommended: Martial Masschelein (martial.masschelein@telenet.be) and Simon Louagie (simonlouagie.wordpress.com). 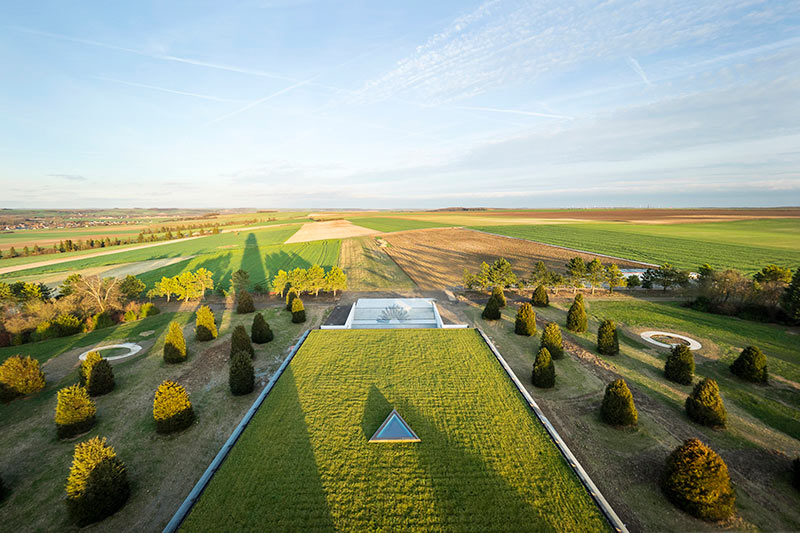 When to Go
Spring and summer in Flanders span roughly March to August. The mornings can still be cold but you’re likely to have mild, warm days and the beauty of the crops making a patchwork over the fields.

Further information
Every single service record from the Western Front is now digitised by the Australian War Memorial and the National Archive, and can be accessed for free. Visit awm.gov.au

Sacred Ground Tours, owned and operated by Australians, specialises in one-, two- or three-day Western Front battlefield tours for singles, couples and small groups. Tours start in the old town of Arras, with transfers from Paris easily arranged. sacredgroundtours.com.au

Back Roads Touring has been running expert-led battlefield tours for more than 20 years, with three five-day, four-night tours to choose from. There is a special six-day tour to coincide with Anzac Day services in 2019. backroadstouring.com