Train travel is as much about the journey as the destination. Vacations & Travel blows the whistle  on some of the world’s best rail journeys. 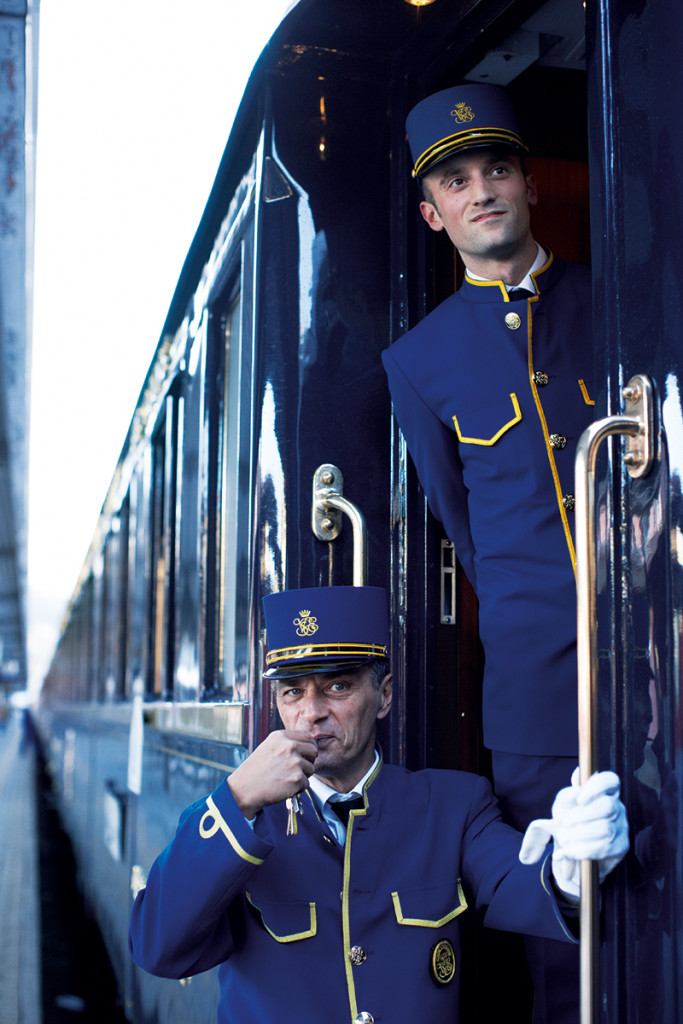 Luxury across Europe
As you board the legendary Venice Simplon-Orient-Express train at London’s Victoria station bound for Gare de l’Est in Paris, French chefs on board are preparing the Michelin-grade menu to be served in one of the exquisite 1920s dining cars. Start with lobster and caviar bellinis by the baby grand piano in the bar car, before feasting on a four-course dinner served by white-gloved waiters. Slip blissfully between the crisp damask sheets in the vintage polished oak and mahogany-panelled cabin, amid the crystal glassware, silk lampshades and giant windows. Wake up, and after breakfast in bed, you’ll be in Venice.

A flying Scotsman
Single malt whisky and valleys of heather are just some of the joys of the tartan-trimmed Royal Scotsman’s Western Journey from Edinburgh across the Scottish Highlands to the fishing town of Mallaig on Scotland’s northwest coast. This ‘mobile’ Scottish country bed and breakfast sleeps 36 in ensuite staterooms, with meals served in two dignified dining carriages. An armchair in the observation car or the open-air veranda provide a wonderful vantage point as you glide past castles, villages and glens. Between April and October, The Royal Scotsman covers several routes around the highlands on trips of two to seven nights.

Castles, Causeways and the Craic
The Belmond Grand Hibernian, the Celtic sister to Belmond Royal Scotsman and the first luxury touring train in Ireland, will commence service in August 2016. The interior of the train draws on Ireland’s unique character and mythology with colours inspired by the Irish countryside. Each carriage features colours of the tartans from the county after which they are named. Sleeper carriages accommodate just 40 passengers in elegant ensuite cabins. The first journey will be a four night tour travelling from Cork to Killarney, Galway and Westport; while a two-night tour journeys north from Dublin to Belfast and Portrush.

Rocky Mountain high
Snow-clad mountains, glacier-fed lakes, wildlife and impeccable service are all part of the Rocky Mountaineer experience. The journey from Canada’s Vancouver to Calgary across the Rocky Mountains has three overnight hotel stops (included in the ticket) passing through the Kamloops region and up to the ski resorts of Lake Louise and Banff, before heading to Calgary, Alberta’s ‘cowboy town’. You travel during the day so you don’t miss any of the moving art gallery passing by your window. Go with the premium Gold Leaf Service which has a double-deck dome car and meals served in the posh dining car.

Footsteps of the Incas
Named after the American explorer who discovered the remains of the 15th-century Inca Citadel Machu Picchu in 1911, Peru’s Hiram Bingham train is one of South America’s finest rail journeys.

Hiram Bingham carries 84 passengers in 1920s Pullman-style carriages, with two luxurious dining cars, a kitchen car, a bar/observatory car and live local on-board entertainment. The journey of just over three hours from Cusco to Machu Picchu winds through some of the Andes’ most breathtaking scenery before arriving at the World Heritage-listed site. There’s time for a five-hour guided tour of the ancient relics before heading back to Cusco.

Heart of Persia
The same company that runs the lavish Golden Eagle Trans-Siberian Express, Russia’s only fully ensuite train on the Trans-Siberian Railway, Golden Eagle Luxury Trains has launched a new tour into the heart of Iran his year, aimed at those who want to better understand probably one of the most misunderstood countries in the world. In addition to the capital Tehran, the tour takes in the exquisite domes of Mashad and Isfahan; the ruins of Persepolis and Necropolis; the 16th century garden of Kashan; and the cultural treasures of Shiraz, known as the city of poets, literature, nightingales and flowers.

Golden Eagle Luxury Trains also offer a tour of some of Europe’s most magnificent cities including Prague, Budapest, Venice and Istanbul on a Grand Rail Tour aboard the Golden Eagle Danube Express. Featuring the signature touches of a Golden Eagle rail cruise, these fascinating journeys now provide the ultimate in European rail experiences.

Chicago bound
Pullman Rail Journeys was born in 2011, bringing comfortable, stylish and relaxing train travel to the American travel landscape. Renowned for its Art-Deco design, classic accommodations and exceptional service, Pullman Rail Journeys offers year round services between Chicago and New Orleans, and has introduced a first-class service between Chicago and Denver, with select departures through until December, 2015. On the Denver route guests will spend two nights in the Mile High City, ensuring time to experience the fast-growing city with world-class museums, a buzzing live music scene, and the beautiful great outdoors in Rocky Mountain National Park. Pullman has also introduced a special journey from Chicago to Santa Fe and Albuquerque in October.

Slow trains in the Orient
The South-East Asia of yesteryear has long been brought alive by the ultra-luxurious Eastern and Oriental Express travelling from Singapore through Malaysia to Thailand. New this year on the glamourous train is an extended variation of the classic route. The six-night ‘Fables of the Peninsula’ expedition will be limited to just 60 passengers and will allow more time to explore the many highlights along the way, such as Kuala Lumpur, the Cameron Highlands, Penang and the beaches of the Gulf of Thailand. Another new route this year is the two-night ‘Ancient Lanna Kingdom’ experience that links Bangkok to Chiang-Mai.

Royalty on wheels
The ‘Land of the Maharajahs’ is wonderful anytime, but Rajasthan is even better when surrounded by the regal grandeur of a bygone era. With its opulently embroidered ruby, sapphire, pearl and emerald Indian decor, gourmet cuisine and first-class service, the Royal Rajasthan on Wheels simply oozes old-world charm. A seven-day journey explores Rajasthan, Madhya Pradesh and Uttar Pradesh. The deluxe and super deluxe cabins are all beautifully furnished with ensuite bathrooms, luxurious beds, comfortable sofas, in-built wardrobes and huge glass windows. Escape the heat and dust in the spa, or relax in one of the lavish bars or lounges.

Slowly, slowly through Spain
From the lands of Castile and Leon, to the Bay of Biscay, Spain’s luxury train has been delighting its travellers for three decades. El Transcantábrico offers a number of itineraries, the most popular being Santiago de Compostela to Leon and Santiago de Compostela to San Sebastian, but shorter itineraries are also available. Boarding the Transcantábrico is like going back in time to the 1920s. Each compartment includes a private bathroom with hydro-sauna, turbo massage and steam bath. The train recommenced operation in early 2011 following upgrades and is today one of the most luxurious trains in the world.

The Soul of Africa
Everyone from kings and presidents to celebrities have ridden The Blue Train, the magnificent, moving five-star ‘hotel-on-wheels’ which traverses South Africa’s vast breadth. On board the train you can indulge in the finest cuisine accompanied by some of South Africa’s finest wines. Around-the-clock personal butlers will see to your every need; be it in the comfort of your private suites, or in any one of the train’s exquisite lounges. The route between Pretoria and Cape Town is a 27-hour journey of 1600 kilometres, passing through awe-inspiring mountain ranges and arid deserts and across untamed savannah grasslands teeming with wildlife.

From Russia with love
Russia’s Trans-Siberian Railway has been a sort of arduous rite of passage for dedicated train enthusiasts since 1901, but the amenities could only be described as basic. That is, until the lavish Golden Eagle Trans-Siberian Express, Russia’s only fully ensuite train, began the luxury service from Moscow to Vladivostok a few years ago. Imagine listening to Tchaikovsky play as you sip vodka in a velvety lounge and gaze through panoramic windows at the vastness of Siberia. All cabins have showers, underfloor heating and panoramic windows. Of course, caviar, vodka and wines are standard fare in the classic Russian restaurant.

The Great Outback
The vast Australian landscape is perfect for train travel. This year the Indian Pacific celebrates 45 years of Australia’s first transcontinental rail journey. For three nights and 4352 kilometres between Sydney and Perth, you’ll be treated to air-conditioned luxury and fine food and wine. Follow in the footsteps of explorers, traversing deserts, through lush mountain ranges and across the sprawling emptiness of the Nullarbor Plain. There are three levels of service, but opt for Platinum or Gold, which have private cabins with ensuites; and include offshore excursions as well as meals and drinks in the plush Queen Adelaide Restaurant.

Starlight, Starbright
Amtrak criss-crosses the USA and has some spectacular rail journeys that not only get you from A – B but do so in style, all while showcasing some of the best scenery in the country. One of the most scenic journeys with Amtrak is the Coast Starlight that operates daily between Los Angeles and Seattle. The train takes you past the dramatic snow-covered peaks of the Cascade Range and Mount Shasta, lush forests, fertile valleys ripe with fruit and long stretches of Pacific Ocean coastline. Another wonderful trip is on the Southwest Chief, which runs daily between Chicago and Los Angeles, through the vast expanse of the fabled American West, while the Empire Builder route from Chicago to Seattle takes you through the Pacific Northwest through majestic wilderness, following the footsteps of early pioneers. All of these trains feature a dining car and Superliner sleeping car, with the Sightsee Lounge Car ensuring a high level of comfort while you watch America pass by. •