Want to escape politics and economic gloom? Run away to sea. A cruise escape is one of the best value vacations you will ever have whether it’s a polar region on a luxury expedition ship, a grand voyage on a medium-sized ship, a transatlantic crossing on a Cunard Queen, or some exotic destination on an all-inclusive luxury ship. And with the plethora of classy, new luxury ships on the horizon, the cruise sector is indeed buoyant.

CELEBRITY CRUISES
Aptly named Celebrity Cruises make you feel like a celebrity with their immaculate, contemporary ships. Celebrity Reflection is the last and largest of five Solstice Class ships and carries 3,046 passengers. The vibe is cool, classy sophistication which appeals to a younger audience around their mid-fifties. Unique attributes are the Lawn Club – with real grass –and a glassed-in solarium. Suite Class guests have their own restaurant, Luminae, and private lounge. Although not all-inclusive, there are genuine luxuries: fabulous bars, restaurants and entertainment, and guests love to dress like a celebrity on formal nights. Suites aside, the AquaClass staterooms are much sought after, adjacent to the stunning Aquaspa. 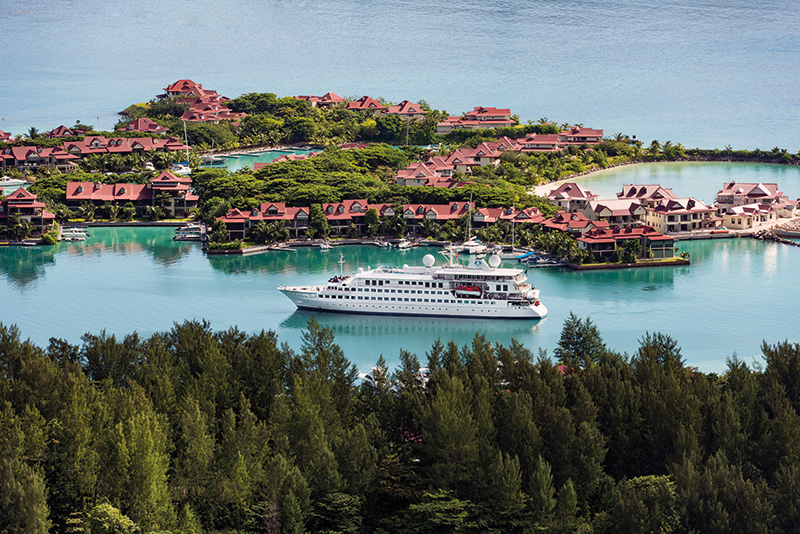 CRYSTAL CRUISES
Devotees of the world’s most-awarded cruise line’s medium-size, all-inclusive Crystal Symphony and Crystal Serenity, know they are the best. Now the company has expanded to embrace yacht cruising; river cruising; Crystal Residences aboard two new Exclusive Class ships to debut in 2018, and have taken to the skies with Crystal Luxury Air. They have just released their 2017-2018 Worldwide Cruise Atlas, which showcases 109 global itineraries aboard Crystal Symphony and Crystal Serenity who will visit 469 ports in 116 countries. Highlights are a transit of the Northwest Passage; a 94-day odyssey through South America and pre and post cruise land programs to Macchu Picchu, a Midsummer’s Eve in Stockholm, and Edinburgh’s Military Tattoo. 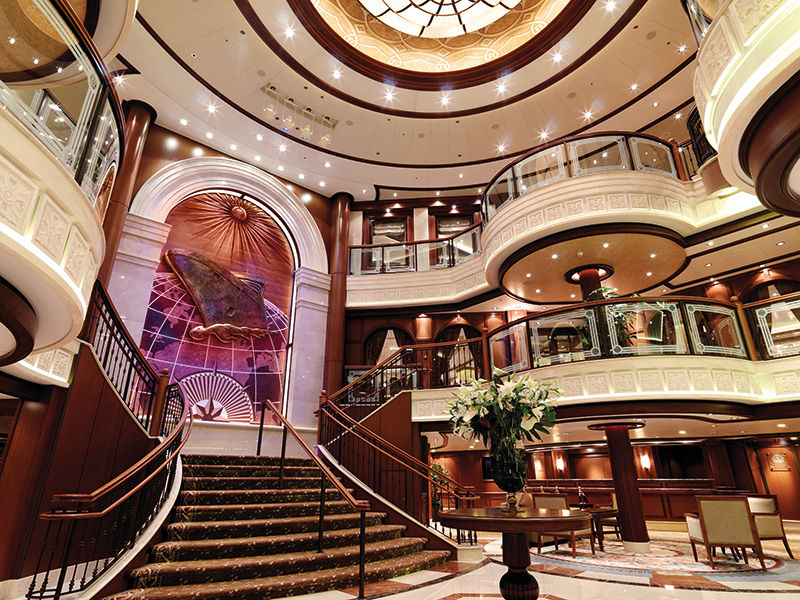 CUNARD
The majestic, head-turning Cunard Queens – Queen Mary 2, Queen Victoria and Queen Elizabeth are the bluebloods of ocean travel. Last year the line celebrated 175 years of history, established initially via Cunard’s transatlantic liner service. Flagship QM2 has just emerged from a multi-million dollar makeover more regal than ever. Being a purpose-built ocean liner, she is best suited for those who love the trappings of traditional ocean travel, but is equally suited to cruising when the vibe is more fun. Essentially, it is only the Queen’s and Princess Grills accommodation – in particular the Grand Duplexes – that are indisputably First Class. Each have their own dining venues, butlers and concierge service. But QM2’s new fine dining restaurant, The Verandah is open to all comers. 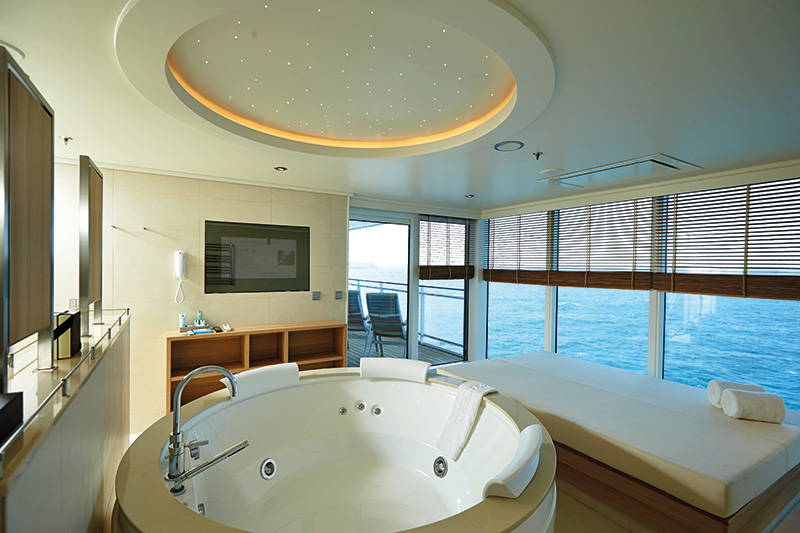 EUROPA 2
Year in year out, Europa 2, German line Hapag Lloyd’s impeccable five-star cruise ship tops the charts in the Berlitz Guide to Ocean Cruising and Cruise Ships. Europa 2 is in a class of her own with her streamline proportions, artful distribution of space, and ‘perfect manners’. Her all-suite, all-balcony contemporary design appeals to youthful cosmopolitan sophisticates and their families. (They have outstanding childrens’ programs as well as theme cruises). The ship is also bilingual, so English-speaking guests can feel perfectly at ease. Between December 2016 and February 2017, Europa 2 will be cruising Oceania with a 15-day Tahiti-Auckland cruise; 16-day Auckland-Sydney; 14-day Sydney-Auckland, and 18-day Auckland-Bali cruises. 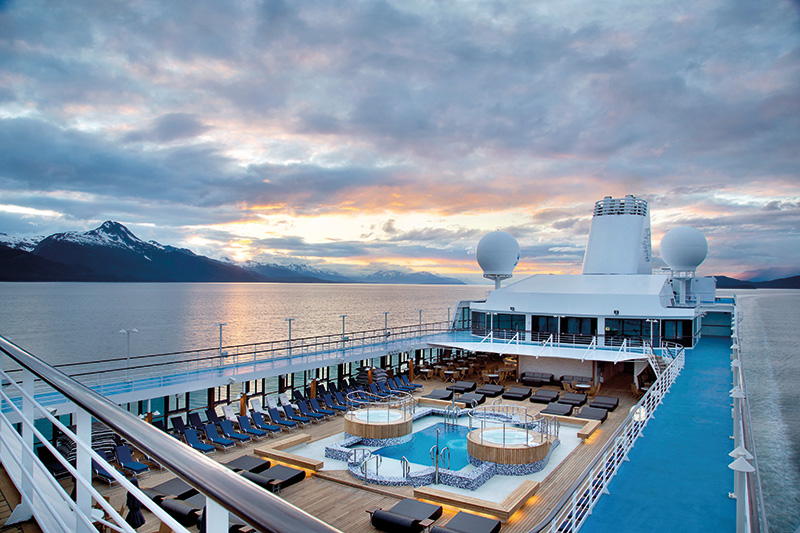 OCEANIA
The line sits securely as a leader in the upper-premium category with an outstanding reputation for destination-rich, culinary inspired journeys on comfortably luxurious ships. Newly-launched, fabulously refurbished Sirena – a former Renaissance class ship has joined the fleet. She arrives in regional waters in November 2017 on her 18-day Los Angeles to Papeete itinerary which includes a series of Papeete to Papeete sailings. Meanwhile, Oceania’s 2017–18 season is offering 109 new itineraries with new port calls in Corsica, Iceland, Quebec and more. While Marina and Riviera will be in the Mediterranean and Nordic Europe, Nautica will call Northern Europe home, Regatta will do a southern sojourn into the Amazon, and Insignia – an epic around the world journey in 180 days! 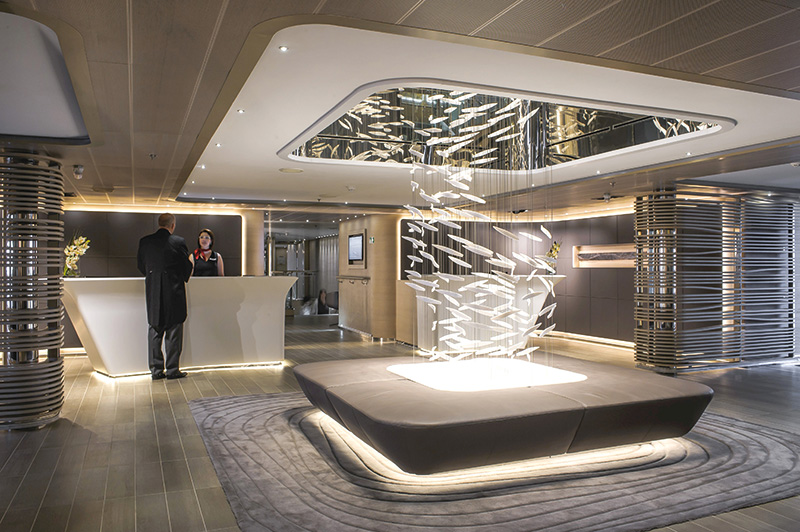 PONANT
Just as you would expect of the world’s only French-flag cruise line, their small, sleek ships form the youngest fleet in the world. Now, they have ordered four new ice-rated vessels each with 92 staterooms and a crew of 100. PONANT yacht cruises and expeditions offer a unique blend of luxury, adventure and fine French fare. The ships’ interior design reflects ethnic chic inspired by driftwood, natural materials and colours which symbolise the authentic nature of the company’s adventure destinations and philosophy and environmental sensitivity. Already a leader in five-star White Expeditions to polar regions, new itineraries will develop Blue and Green Expeditions to Amazonia, Costa Rica, and Papua New Guinea, and in 2017, L’Áustral will conduct an inaugural season of Kimberley voyages. 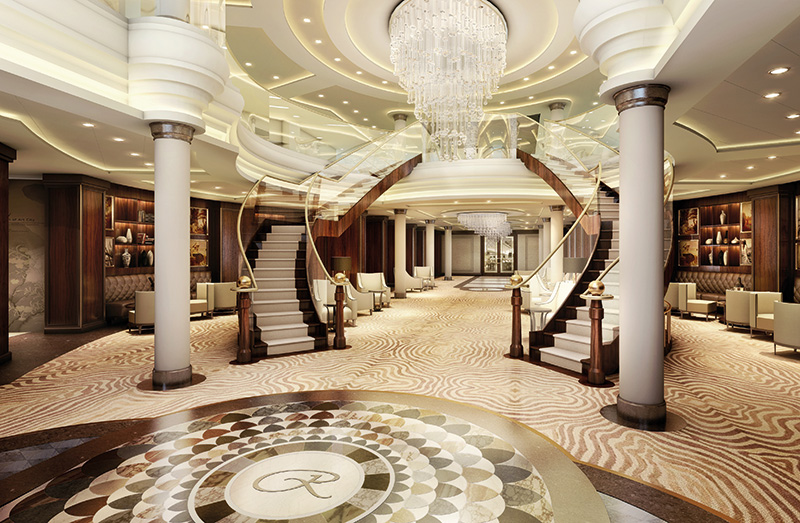 REGENT SEVEN SEAS
Billed as the most inclusive luxury cruise line, and with free unlimited shore excursions in every port–of-call in every destination, free Wi-Fi, pre-paid gratuities, fine wines and spirits, ground transfers and luxury pre-cruise hotels stays, who could argue? New ship Seven Seas Explorer is promoted as “the most luxurious ship ever built.” A popular feature on board will be her Gourmet Explorer Tours, where guests enjoy unique culinary adventures in select destinations accompanied by a local guide and chef instructor from the ship’s Culinary Arts Kitchen. But the ultimate luxury on Explorer is the signature Regent Suite with two marble bathrooms, golden chandelier, Steinway piano, media centre including iPad, private driver and personal guide in each port, personal butler, an in-suite spa, sauna, steam room and unlimited spa treatments. The all-suite, all-balcony ship carries 750-guests and 542 staff – claimed as the highest space and staff-to-guest ratios in the cruise industry.
Itineraries in the 2017-2018 Voyage Collection for their four-ship fleet, will reveal 335 port calls in 98 countries. Most thrilling will be Seven Seas Navigator’s rare, 30-night summertime excursion though Canada’s fabled Northwest Passage where you will encounter ports you can’t pronounce, such as Tuktoyaktuk, Uumnnannaq and Nunavut. 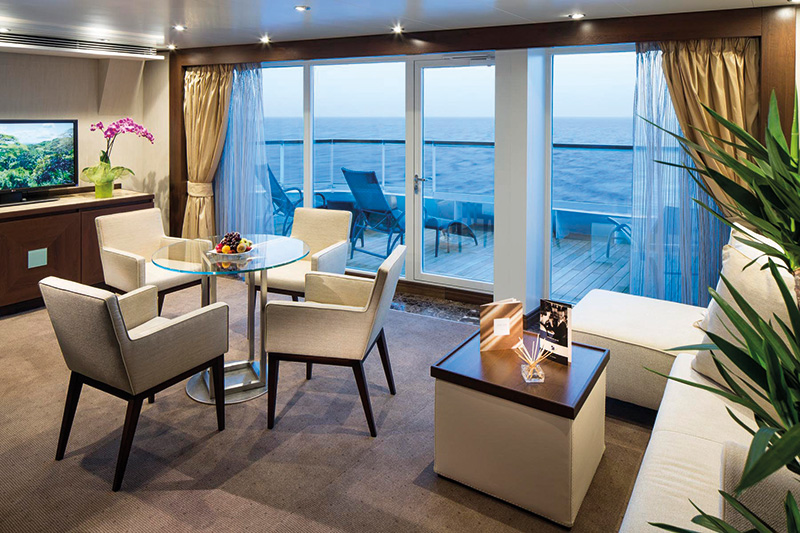 SEABOURN
For Seabourn fanciers, too much is never enough. Hence, the new ship is called Seabourn Encore. In 2018, Seabourn Ovation will follow. Renowned for luxury, intimate and stylish ships, fans will be queuing for their first glimpse of the new 600-guest Encore when she heads down under in summer 2016. During her inaugural Australian season, she will make nine maiden calls between Darwin and Geelong. Always setting the bar higher, new features are The Retreat – a serene space with private cabanas designed as private living rooms. Also, Encore’s fine dining restaurant will be overseen by three-star Michelin chef, Thomas Keller. Following her delivery in December 2016, she will offer two pre-inaugural cruises: a 16-day voyage from Athens to Dubai, and an 18-day Dubai to Singapore. Elsewhere in the fleet, in the Northern Hemisphere, Seabourn Quest is offering new experiences of unique destinations led by scientists and naturalists, which enable small groups to explore stunning waterways and fjords, including Iceland’s Vigur Island, and the Lofoten Islands. 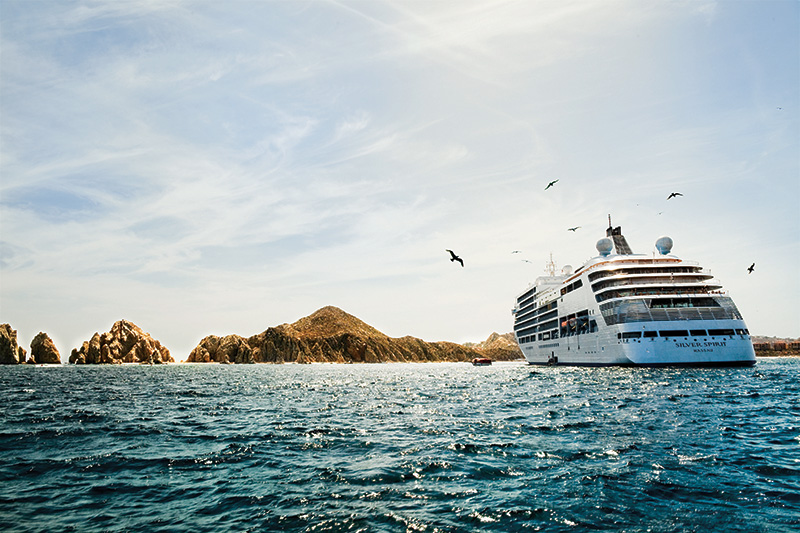 SILVERSEA
Aficionados of Silversea’s intimately luxurious ships have started the countdown to April 2017 when new star, the 596-guest Silver Muse makes her entrance. She sets a new benchmark in the ultra-luxury cruise category with all-suite accommodation, eight restaurants, state-of-the-art technology, bespoke al fresco areas and flawless Italian craftsmanship throughout. Her 2017 itinerary showcases an amazing 52 UNESCO World Heritage sites from ancient Greek temples to Caribbean fortresses. On her first Mediterranean tour, she will visit 13 UNESCO sites including Cinque Terre, Olympia and Tower of Belem, Lisbon before her transatlantic crossing to Old Quebec, then eventually transiting the Panama Canal on to South America. All up, she will call at 34 countries and 130 ports. 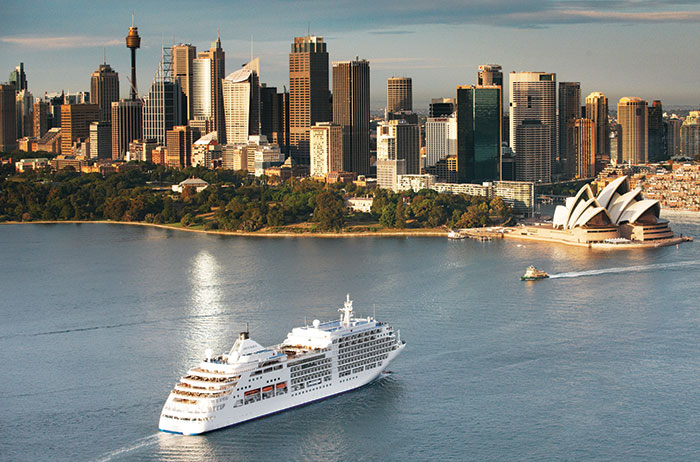 STAR CLIPPERS
Founded by Swedish yachtsman Mikael Krafft 25 years ago, Star Clippers has announced a fourth sailing ship, Flying Clipper. She will be the largest five-masted square rigger ever built. Little equals the thrill these amazing ships deliver when all 35 sails unfurl. Flying Clipper will carry 300 passengers in a variety of cabin grades including 34 suites with balconies and four luxurious owner’s suites. A unique feature is the elegant, light-filled atrium dining room. There are three swimming pools, an alfresco Tropical Bar and water sports platform.
Star Clippers sail the Mediterranean in summer, the Caribbean and Cuba in winter, and a new route in Asia starting in December 2016. •