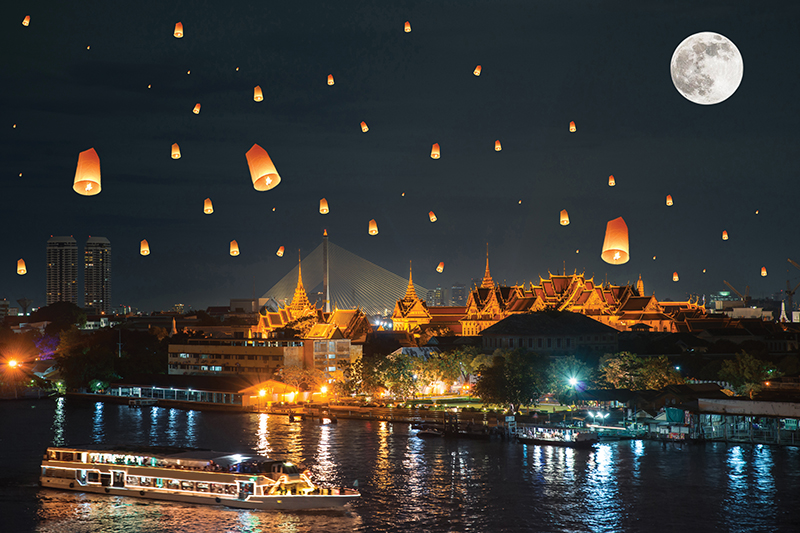 “Watch out!”, my son screams as a scooter, its pillion passenger armed with an enormous loaded weapon, drives straight for me as I step out of the street in Phuket Old Town. But his warning is too late. I’m hit. But there’s no sympathy from either of my kids. Instead, they toss a bucket of water at me and shriek in delight at the resulting sight of their soaking wet mother, the first of our family to fall victim to Songkran, the start of Thailand’s three-day New Year festival.

Just half an hour earlier we had been in the peaceful grounds of Wat Chalong, Phuket’s biggest and most revered temple, reverently trickling fragrant petal-infused water over statues of Buddha, then onto the outstretched hands of orange-robed monks and community elders to wash away bad luck and bring prosperity for the New Year. And now here we are in the midst of a full-scale battle. 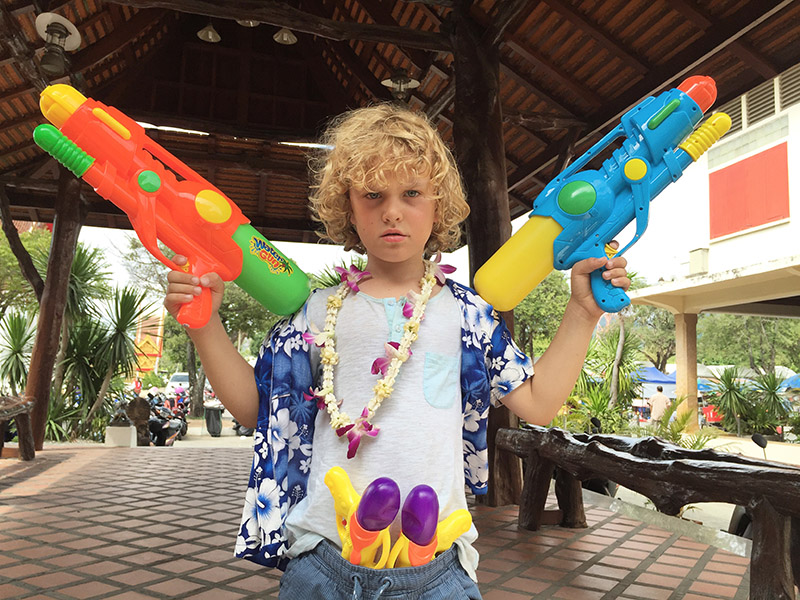 Running from 13 to 15 April, Songkran is the country’s most important, and wettest, public holiday and though its origins share more with the time-honoured and holy cleansing traditions that began our day’s festivities, somehow it morphed into a riotous, country-wide water fight.

We head from the relatively dry confines of the temple to Phuket Old Town, which has been transformed into a wet and wild battleground. Waves of water are liberally flying through the air as a take-no-prisoners army of men, women and children – clad in a uniform of cheap Hawaiian shirts and tooled up to the max with water pistols, water cannons, and buckets of iced water – indiscriminately drench passers-by. Including us. The hordes of water warriors by turn drench us and reach out to paint our faces with smears of white paste to ward off evil.

When a pick-up truck packed with locals sprays us with shockingly cold iced water, it’s time for retaliation. We throw on gaudy Hawaiian shirts with all the enthusiasm of a family of Elvis impersonators and I put a temporary embargo on my no gun stance, arming my kids with enormous fluorescent water cannons and giant pistols. 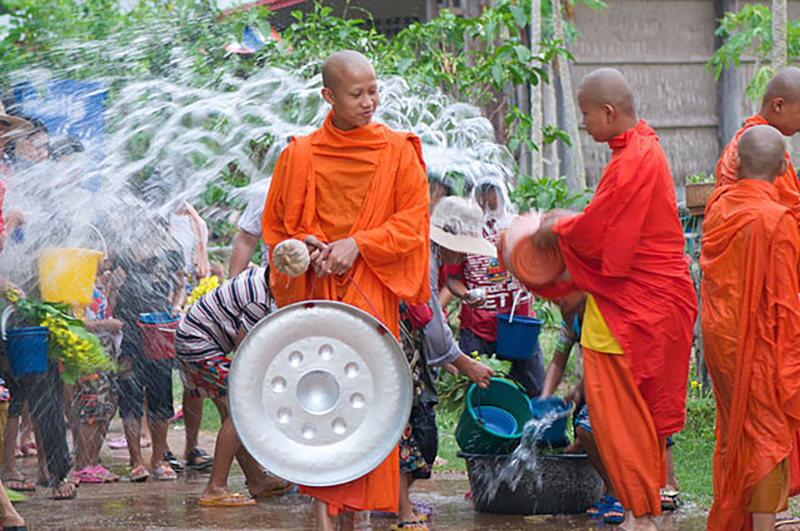 We dive head first into the mêlée. My daughter, always the more sensible of the two, uses me as a human shield, but my locked and loaded son dances gleefully through the streams
of flying water, firing at anything and anyone that moves.

I race after him, shouting reminders to keep his trap firmly shut as he cops hit after hit of the unfiltered water straight in the face, not wanting my days of carefully consuming only bottled water to have been a total waste of time. I cross my fingers that the white paste we’re now coated in is as effective in warding off bacteria as it is in warding off evil.

Of course I could have kept the family safe and dry in our hotel room, just about the only place you won’t get drenched during Songkran, but where’s the fun in that? 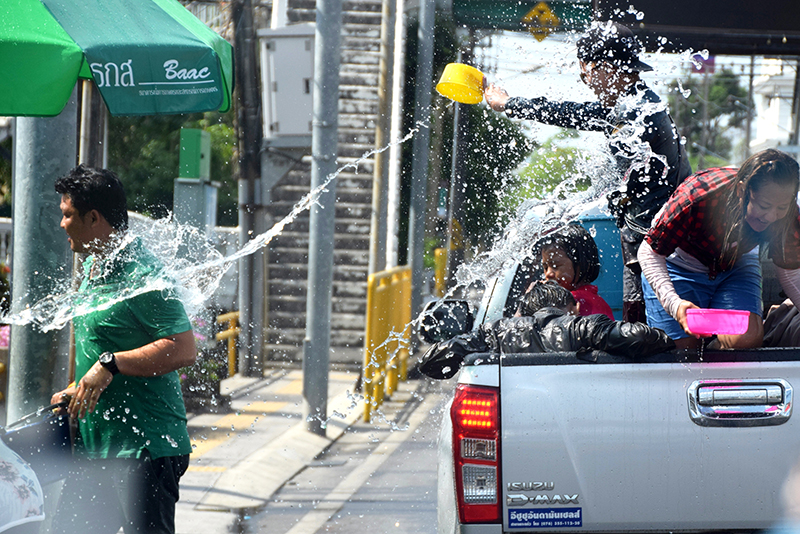 While Songkran may be Thailand’s wettest and most famous festival, it is by no means the only one. The Thai people love a party and never fail to delight visitors with their many enthusiastic and colourful celebrations, each offering a unique glimpse into the heritage and traditions of this delightful country. From the wonderful to the just plain weird, here are a few that are worth planning a visit around. 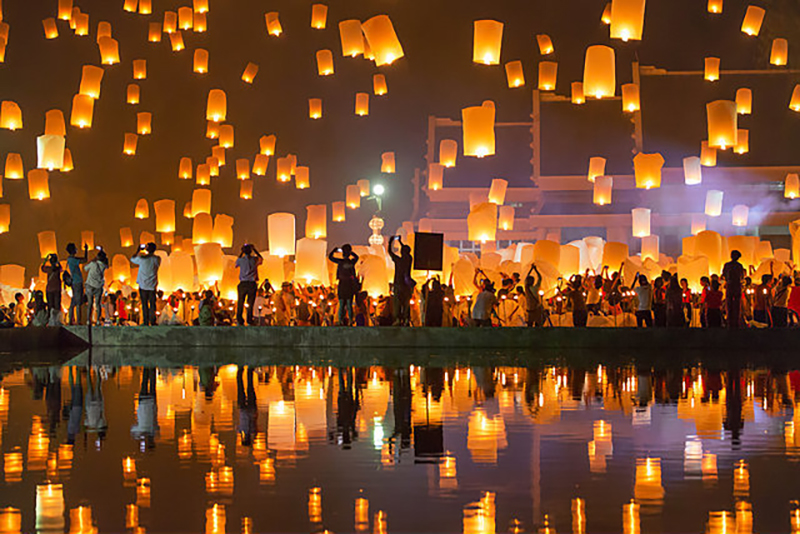 One of the Kingdom’s oldest and best-preserved traditions, Loy Krathong is Thailand’s Festival of Lights and also one of its most beautiful. The lantern festival, held on the night of the 12th lunar month (usually in November) is a time to let go of past mistakes and launch fresh wishes out into the universe. Its most famous ritual is the launching of krathong – small paper boats and lanterns filled with flowers, candles, joss sticks, a lock of hair or nail clippings to release negative emotions and bad luck, and a small monetary bribe for Phra Mae Nam Kongka, the water goddess.

As the sun dips and the full moon starts its ascent into the night sky, people gather around lakes, rivers and canals to launch thousands of krathong into the water, their flickering candles creating an enchanting and unforgettable sight.

Celebrations are held all over the country, including Bangkok and Phuket, but the most elaborate and unforgettable festivities occur in the ancient Thai capital of Sukhothai and Chiang Mai in the country’s north. 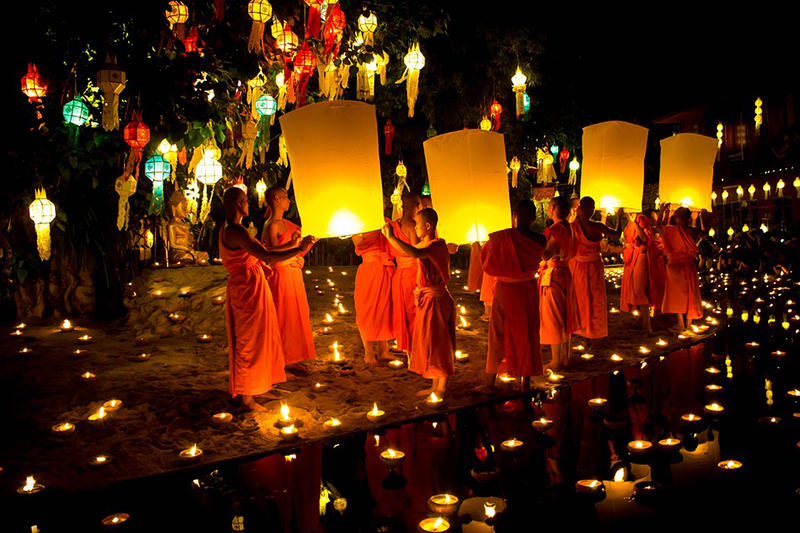 In ancient times Northern Thailand’s Yi Peng was a separate event to Loy Krathong, but today the two celebrations are timed to coincide in spectacular style. Yi Peng’s most eye-catching ritual is khom loy, where metre-tall paper lanterns (also known as sky lanterns) are launched simultaneously into the night sky, creating a sparkling, floating spectacle.

In the northern capital of Chiang Mai, tens of thousands of sky lanterns are released over three days, along with a steady stream of krathongs on the water, in an effort to rid their owners of personal demons and negative emotions. While much of the action is centred around Chiang Mai Old Town with parades, pageants and fireworks, more spiritual celebrations and ceremonies take place at Wat Yai Chai Mongkhon, at Wat Phan Tao and Wat Chedi Luang. 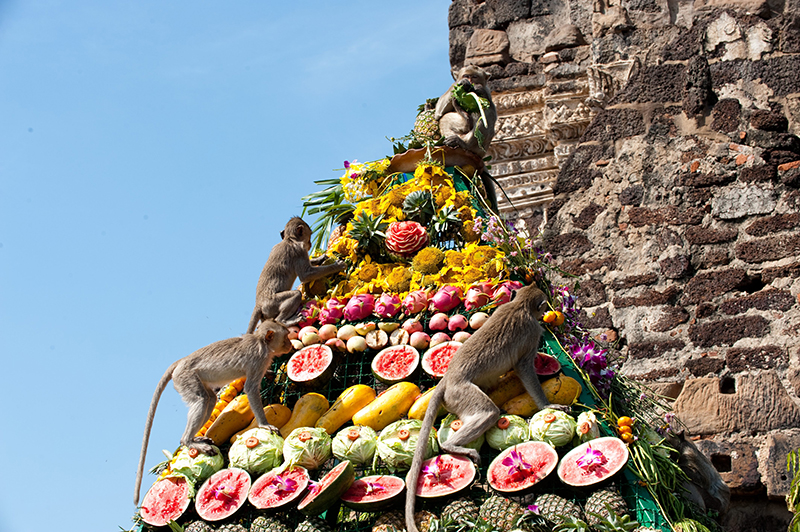 One of the most popular festivals in the central region of Thailand, around 90 kilometres north of Bangkok, Lopburi’s oddly monikered Monkey Buffet Festival is celebrated on the last Sunday of each November to bring good luck and good fortune in the form of tourist dollars to the province.

In what can only be described as a Monkey’s Mad Hatter’s Tea Party – a feast of fruit, vegetables, sticky rice and sweet treats is laid out among the Khmer ruins the long-tailed macaques call home. During the splendiferous buffet, all civilised dining etiquette is excused as thousands of pampered primates eat, play with and shove the tasty treats where they ought not, dancing wildly on tables and rolling amongst the ice-cream in a surreal simian bacchanal.

The native macaques, whose veneration dates back to heroic monkey deity Hanuman and his simian army who, according to Thai legend, helped Rama in creating the ancient city of Lopburi. Many of Lopburi’s residents still consider the macaques to be descendants of Hanuman and they are treated as part of the local community, free to enter public buildings and traverse roads like any other citizen, despite their pilfering and occasionally destructive ways. 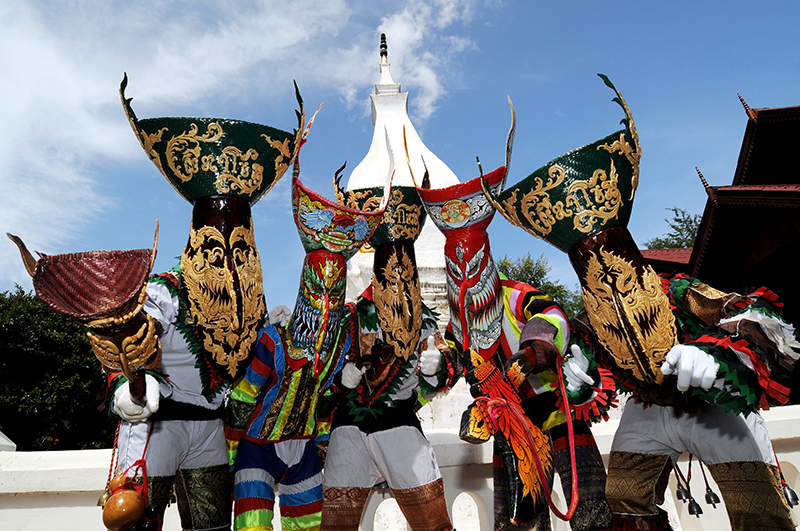 The origins of Phi Ta Khon lie in an ancient tale. The great Prince Vessantara, who would become the enlightened Buddha, took a long journey and was gone for so long his followers had presumed him dead. When he returned, very much alive, the ensuing celebrations were said to be so raucous they woke the dead.

In an annual re-enactment of the story, Phi Ta Khon, celebrated on the first weekend after the sixth full moon (the exact date is set by mediums each year) sees men paint themselves with mud and dress as fearsome masked spirits with colourful trailing costumes. This particular festival is peculiar to the village of Dan Sai in north-eastern Thailand. And when I say peculiar, I mean exactly that. You see, along with the mud, masks and colourful costumes, the men of Dan Sai prance about brandishing giant wooden phalluses.

The masked merry pranksters dash into the crowd frightening children with their scary masks and waving their timber appendages at blushing maidens as they dance around the streets to a soundtrack of clanging cowbells.

More than a few cans of local ale are involved in the celebrations and by late afternoon the whole shebang turns into a festive street party. 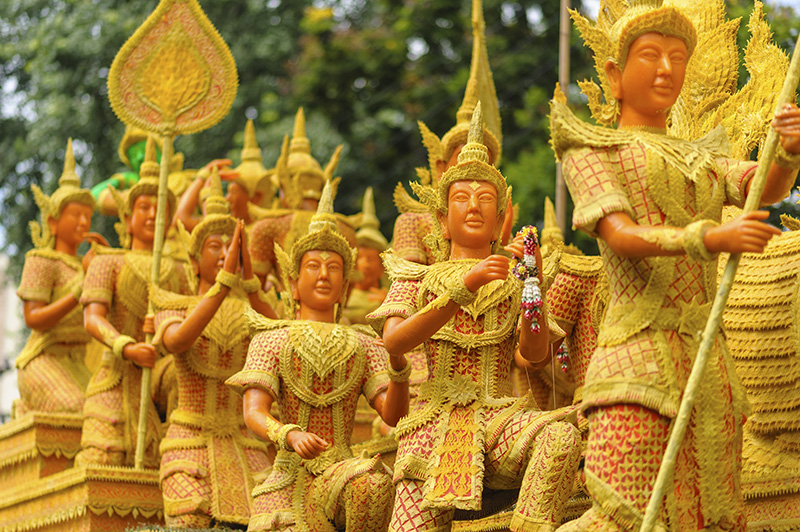 The morning after the full moon in July marks the beginning of Buddhist lent, a three-month period when monks must retreat to their temple grounds and dedicate their time to study and meditation. It is an auspicious time for Buddhists as it marks a period of spiritual renewal.

Unique to Ubon Ratchathani province, about 600 kilometres northeast of Bangkok, is the Lenten candle festival. A must for art lovers, local artisans create larger than life candles
as offerings to the temples. Of course, the term candle is somewhat of a misnomer as the elaborate beeswax creations, often accompanied by scenes of Hindu and Buddhist mythology sculpted from wood or plaster and coated with wax, are serious works of art and will never be lit.

During the popular festival, more than 70 beeswax artworks are paraded through the city streets on floats, accompanied by dancers, musicians and the candle creators themselves. 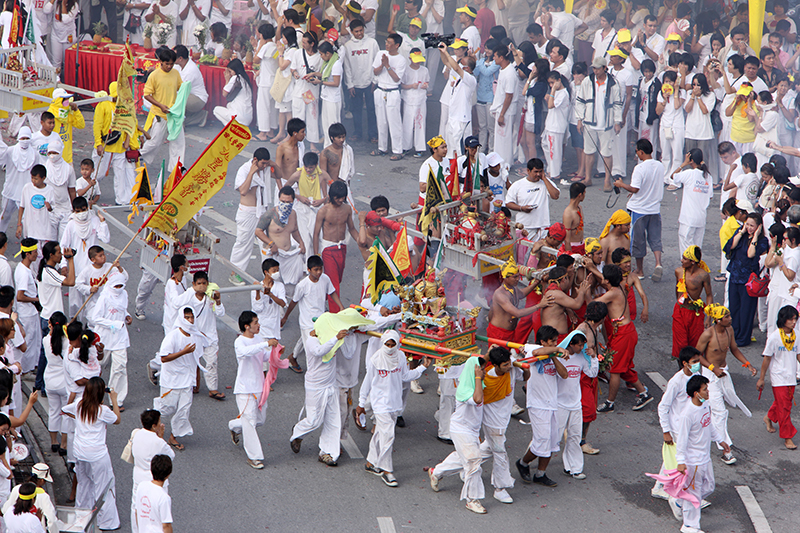 There are several variations of the origin tale of this Thai festival, but the most common is that members of a travelling 19th century opera troupe became ill with a deadly fever
while performing on the island of Phuket. The entertainers undertook a vegetarian diet and prayed to two of their most venerable emperor gods, Yok Ong Sone Teh and Kiew Ong for purification. Their subsequent recovery resulted in a festival, which continues to be celebrated each October, with Phuket seen as the centre and spiritual home of the festival.

The nine-day festival pays tribute to the belief that abstinence from meat and stimulants during the ninth lunar month encourages good health and peace of mind. Ceremonies take place in and around Phuket’s six Chinese temples, where local Chinese Thai people bring household goods for blessing, along with offerings of food and drink and the gods are invited to descend from the heavens and preside over the events. The festival’s accompanying sacred rituals are said to bestow good health and good fortune upon those who observe them.

Ironically, given the end goal is healthy and long life, these sacred rituals need to come with a “don’t try this at home” disclaimer as they frequently involve life threatening acts of pain and self-mutilation. Audiences encourage participants, known as Ma Song to perform feats including walking barefoot on hot coals, ascending ladders with bladed rungs, bathing in hot oil, and piercing themselves with swords, knives, spears and other random sharp objects. • 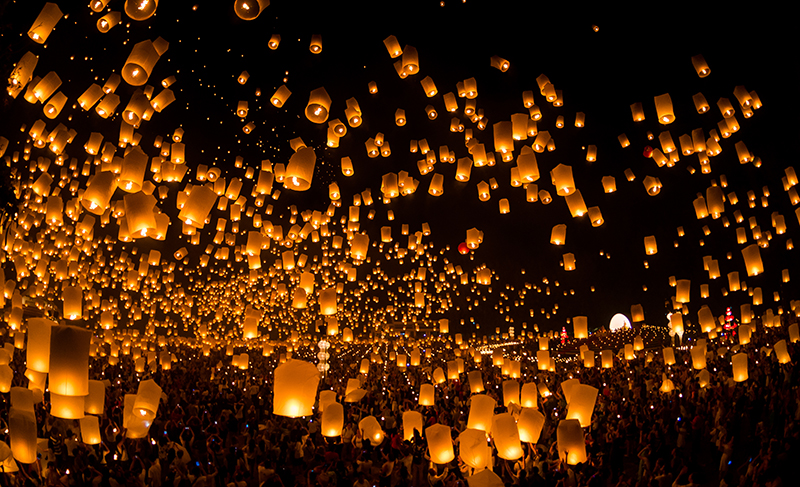