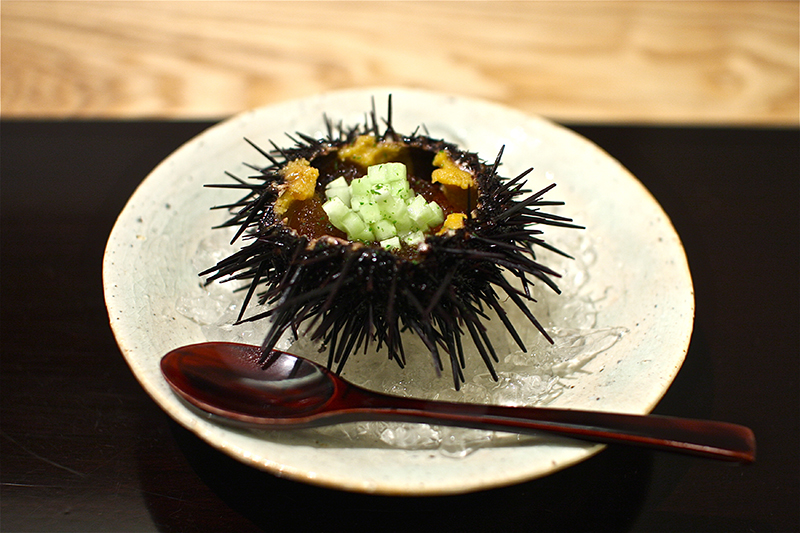 More than a century ago, brothers Ándre and Édouard Michelin, founders of Michelin tyres, launched a restaurant and hotel guide to encourage drivers back then to use up their tyres and buy more.

Today, the Michelin Guide Tokyo 2017 is one of the most respected and famous systems for rating restaurants and hotels across the world. As any chef worth his salt knows, gaining a Michelin star can instantly propel one from obscurity to the heights of stardom. It’s a sign that you’ve succeeded at the highest level as a chef.

So, it’s no mean feat that Tokyo has ranked number one in the world for the most three-star Michelin restaurants for the past decade, the length of time theMichelin Guide Tokyo has been published.
In this year’s edition, 227 establishments were awarded stars: 12 with three stars (four which have held their stars for 10 years); 54 two-star restaurants, and 161 with a single star each. Sixty-six new restaurants were added this year alone.

Although there are two French three-star restaurants on the list, when in Tokyo it would be a shame not to treat yourself to the finest Japanese cuisine the Land of the Rising Sun can produce.

Worth a special journey

In Michelin terms, three stars mean exceptional cuisine, worth a special journey, so at least one (if not more) of these restaurants should be on your list. Many only seat a handful or two of patrons, so reservations well in advance are essential. 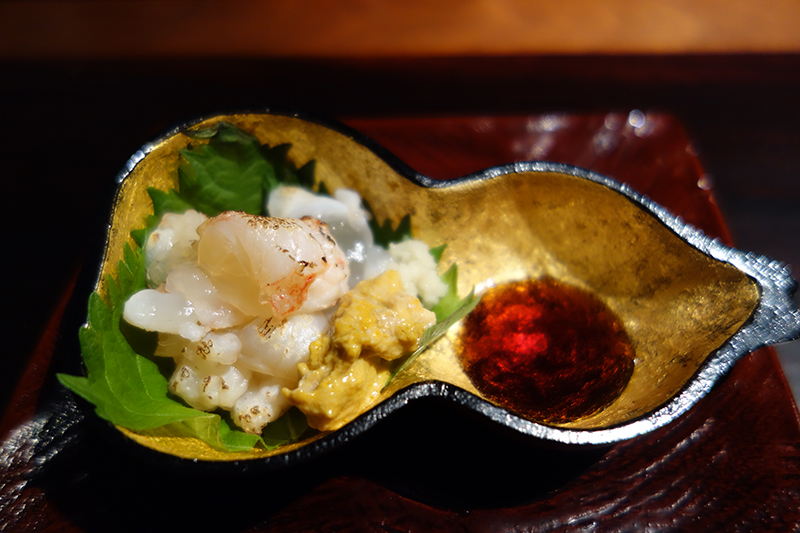 At Hideki Ishikawa’s namesake restaurant in the geisha district of Kagurazaka, you’ll find traditional kaiseki (Japanese haute cuisine served as multiple courses) served by waitresses wearing kimonos. Like most high-end Japanese restaurants, the menu changes with the seasons, ensuring the ingredients are the freshest available. Sit at the counter made from a 400-year-old cypress tree taken from the Ise Shinto shrine in Mie, and let Ishikawa serve you his exquisitely simple dishes, like seared lobster with vinegar soy sauce.

Located around the corner, Kohaku is regarded as the more casual sister of Ishikawa. Chef-owner Koji Koizumi served as right-hand man to Hideki Ishikawa for years before opening his own business at Ishikawa’s former premises. Koizumi is an innovative kaiseki master who gives his dishes an avant-garde twist by combining ingredients not usually associated with Japanese cooking. One of his signature dishes is autumn mackerel, marinated with vinegar for four days and lightly smoked over burning rice. 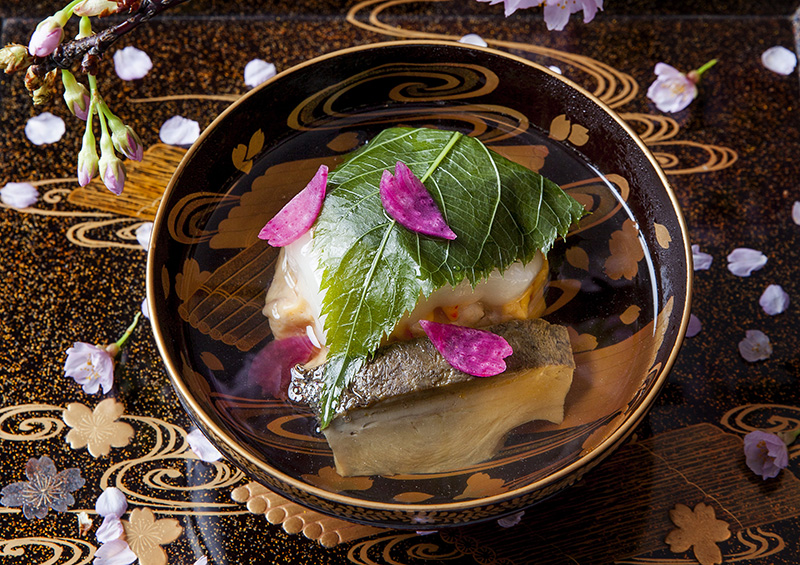 The philosophy of Nihonryori RyuGin owner-chef, Seiji Yamamoto, is that its cuisine is a symbol of the richness of Japan, and “tasting its treasured ingredients in their natural state is the ultimate feast”. Using precise techniques perfected over centuries, Yamamoto and his team take their art very seriously. The aromas are central to the experience, so much so, that wearing perfume or cologne is prohibited here. Also, if you have dietary requirements or allergies that mean you can’t eat what’s served up, they won’t accept your booking, as changes would compromise the quality of the food. The restaurant’s name, RyuGin, originates from a Zen fable involving a powerful dragon, which is reflected in the surrounding artwork and presentation plates adorned with these mythical creatures.

At Kanda, chef Hiroyuki Kanda doesn’t have a menu. He is the menu. “All our customers have unique personalities, and perspectives on life. They are different ages and sometimes come from different cultures. There is no such thing as an ideal ‘one-size-fits-all’ approach to cuisine, therefore we have no written menu. Each experience is designed to make each customer happy,” he says. Expect creations such as Japanese-style beef cheeks simmered in red wine, or sukiyaki with eggs whisked like snow. 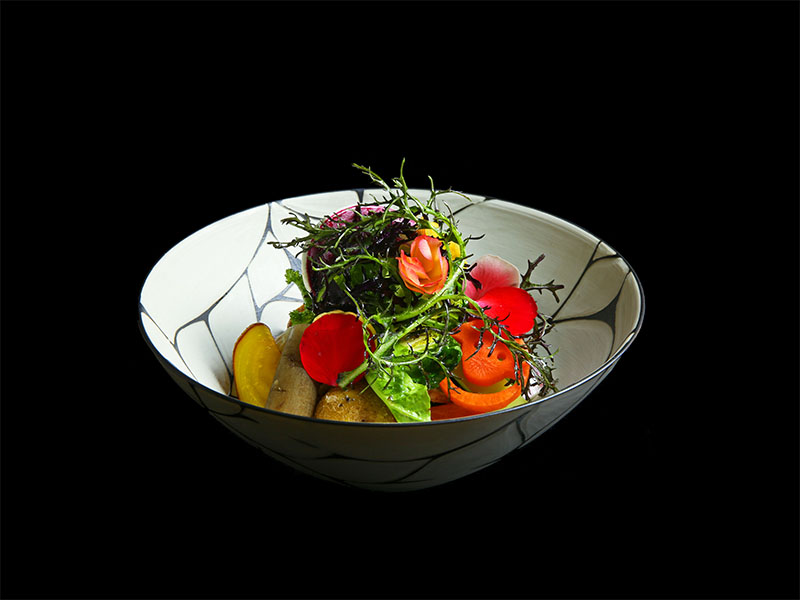 With just six seats set out along a wooden counter, Akio Makimura cooks up a kaiseki degustation of fish dishes at his restaurant Makimura, as he has been doing for the past 28 years. His signature dish is Tai Chazuke, sea bream rice with green tea, bought every morning from Tsukiji Fish Market and prepared there to allow the umami flavour to develop by the time he uses it in the restaurant.

Another Michelin chef who bases his cooking on the city’s culinary traditions is Jun Yukimura of Yukimura. He is especially renowned for his shabu-shabu (a hotpot dish named after the sound produced when the ingredients are stirred in the cooking pot), and snow crab in winter.

The flavour and freshness of sushi in Japan bears almost no resemblance to the kind we know in Australia, and Tokyo’s three-Michelin starred sushi restaurants take it to a whole new level. 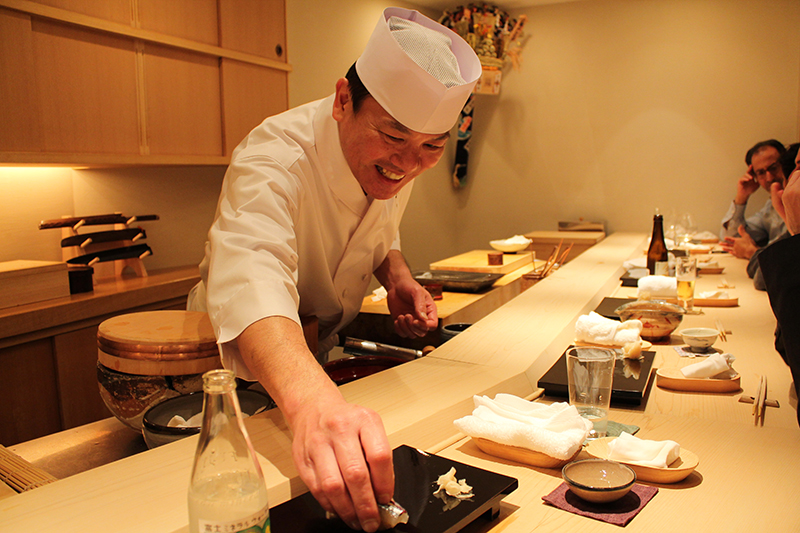 Sushi Saito, owned by chef Takashi Saito, is widely regarded as the top sushi restaurant in Tokyo. At Sukiyabashi Jiro Honten you’ll find the ‘left-handed master craftsman’, Jiro Ono, star of the documentary Jiro Dreams of Sushi. He serves omakase nigiri sushi and nothing else at his authentic sushi restaurant. Watch as every single piece is made in front of your eyes with care and precision. At Sushi Yoshitake, skills honed over years of experience by master sushi chef Masahiro Yoshitake, the finest ingredients are transformed into works of art.

If you’re game to try the ‘meal that can kill you in a heartbeat if not cooked right’ – the poisonous blowfish – then three-star Usukifugu Yamadaya is certainly the place to do it. Fugu (blowfish) contains poison in its organs, so only chefs with a special license are permitted to prepare it. Yamadaya’s set course of a range of different fugu dishes, including fugusashi (pufferfish sashimi); karaage (deep-fried); and fuguchiri-zousui (a hot-pot meal of blowfish, vegetables and rice) will allow you to taste it in many ways.

Worth more than a detour 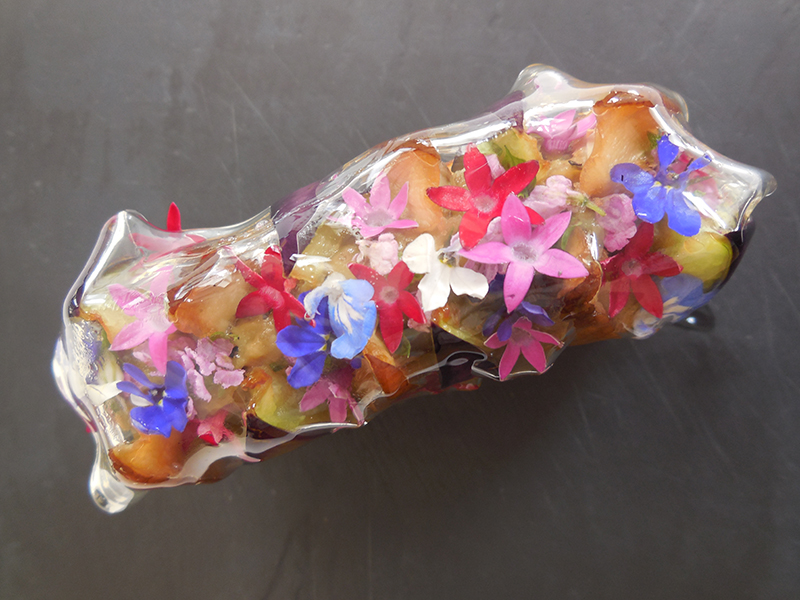 Michelin rates two-star restaurants as ‘excellent, worth a detour’, but they are much more than that, and rather than just trying to pop in after a day’s sightseeing, I would say they’re worth making them one of the highlights of your holiday. There are no less than 54 of these shining stars in the Japanese capital.

A long-time favourite is Narisawa, with chef Yoshihiro Narisawa at its helm. Narisawa has coined his own style of cuisine, called ‘innovative satoyama’, which is a term for the special place between mountain foothills and farmland. Narisawa applies techniques learned through years of experience working with top chefs across European to Japanese cuisine. 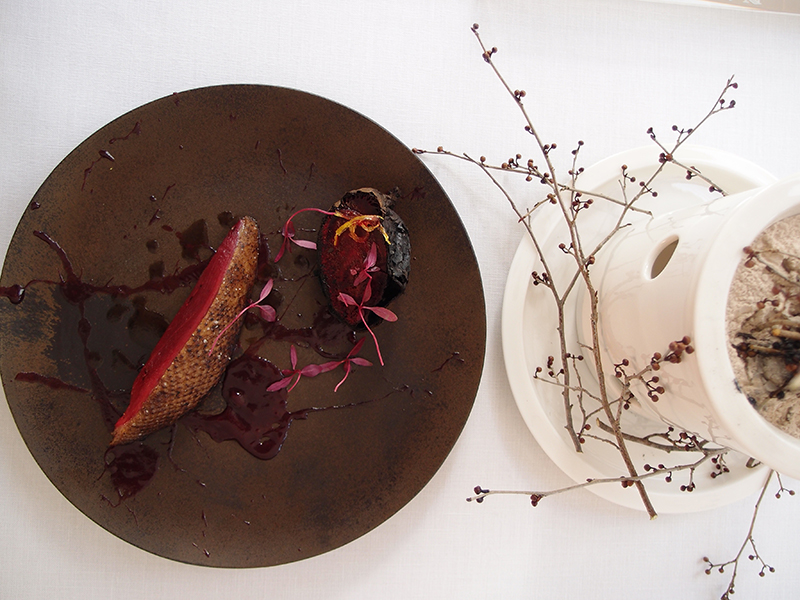 Described as precise, whimsical, imaginative and delicious, his muse is the environment, with dishes named ‘Life and Death’ and ‘Gifts from the Forest’. Narisawa is also one of the best places in the world to appreciate Japanese wine, with pinot noir from Nagano, riesling from Iwate, and aged Bordeaux-style blends from Yamagata and beyond.

Daigo is a two-Michelin-star restaurant that serves ‘shojin’ food, or Buddhist vegetarian cuisine. This little restaurant was established in 1950 and is located near the Seisho-ji Temple at the foot of Mount Atago. Head chef Daisuke Nomura’s cuisine is based on the concept of appreciating simple food; and the setting, overlooking a tranquil garden, will undoubtedly leave you feeling completely Zen. 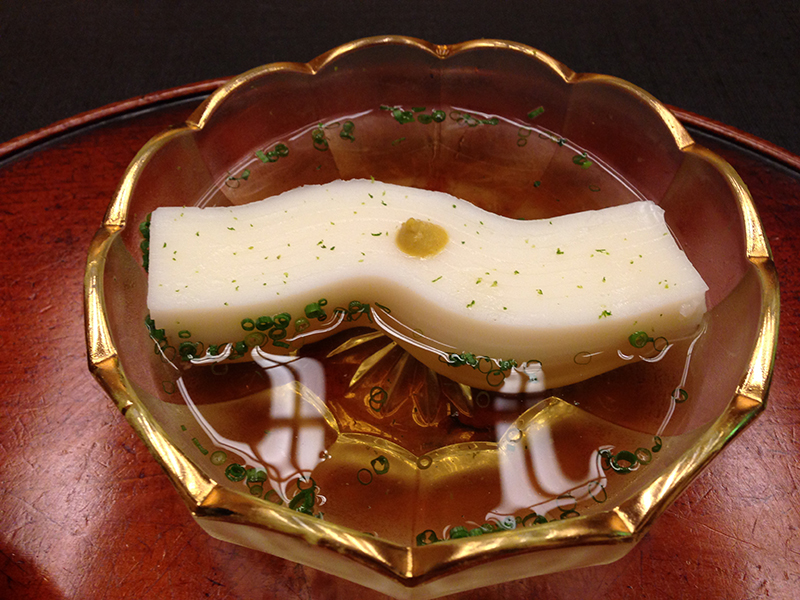 One of the younger generation of Japanese chefs who has made a name for himself with his quirky and playful take on traditional cuisine at his one-star restaurant Den is Zaiyu Hasegawa. One of his signature dishes is ‘Dentucky Fried Chicken’, a gourmet version of the iconic fast food dish with chicken stuffed with different types of mushrooms, almonds, and then fried. It’s served in a cardboard box (with a picture of Hasegawa on it) with little surprises personally picked for each diner.

A degustation at a three-star establishment can set you back anything from $200 – $1,000 per person, but perhaps the best thing about eating in Tokyo is that not all Michelin-rated restaurants are super-expensive. 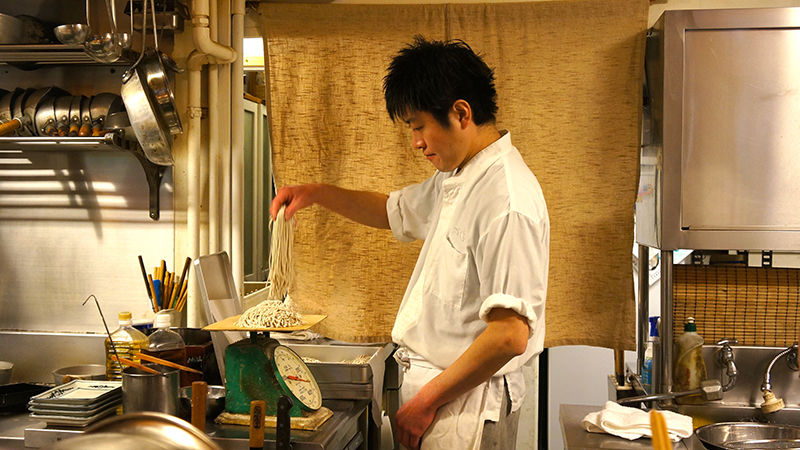 Last year, the Michelin Guide Tokyo recognised and awarded a ramen restaurant a star for the first time: Tsuta, where a lip-smacking bowl of the award-winning noodles will set you back less than an average focaccia and coffee in a Sydney café. The secret to its tastiness lies in the broth (with hints of white truffle oil and red wine) and thin hand-made ramen noodles made to an original recipe by owner Yuki Onishi.

This year the Michelin Guide Tokyo also awarded a star to another ramen spot, Nakiryu, where a mouthwatering bowl of steaming noodles costs less than $10, making it one of the cheapest Michelin meals on the planet. 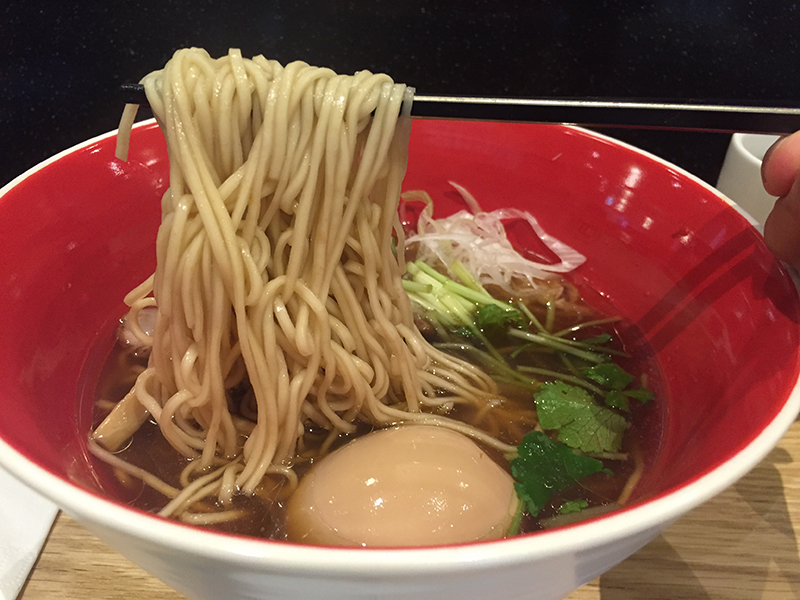 One-star soba restaurant Kyourakutei Soba makes its noodles by hand on a millstone, ensuring that they are fresh each day. It has also earned its reputation for making extraordinarily crisp and delicate tempura, and these masterpieces can be enjoyed for as little as $25.

Family-run Katsuzen is the only Michelin-starred tonkatsu (breaded, deep-fried pork cutlet) restaurant, and its Michelin star is a sign that nowhere in the world does it better. Owner Etsuo Nagai has been a tonkatsu chef for almost 50 years, and while this restaurant is at the higher end of the affordable Michelin star list with lunch for $50, the craftsmanship of the dishes makes them priceless.

Where to stay
For a five-star experience to match your Michelin-star dining, the Imperial Hotel is one of the finest hotels in Tokyo. Imperial Hotel. 1 Chome-1-1 Uchisaiwaicho, Chiyoda; +81-3/3504-1111; imperialhotel.co.jp