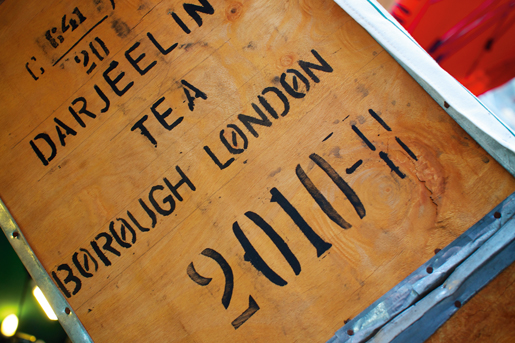 You can hear the sizzling and hissing first, then comes the delicious aroma of gourmet sausages jumping around on a hotplate at the Posh Boys Bangers stall at London’s popular Borough Markets. There’s a big line up for them too as the skies turn grey on day one of a London market trawl.

“What’s it to be love – smoked Toulouse or beef chorizo are our top sellers,” says one of the “posh boys.”

I go for the smoked Toulouse and manage to squeeze into a seat beside a local who tells me Borough Market that sits within the shadow of London Bridge is “the” place to come for the best produce ever. After my beef chorizo – I have to agree – it’s probably the best sausage I have tasted.

Crowds are gathering at the market as I wander around the 100 stalls that tempt shoppers with everything from home-made “ultra-chocolate” brownie to wild boar pies.

Dating back to the 13th century, it is London’s oldest fruit and veg market and some of the present-day businesses have been feeding Londoners for centuries. There’s a potato merchant with a business that dates back to 1875 with a display of coloured potatoes ranging from black to deep purple. 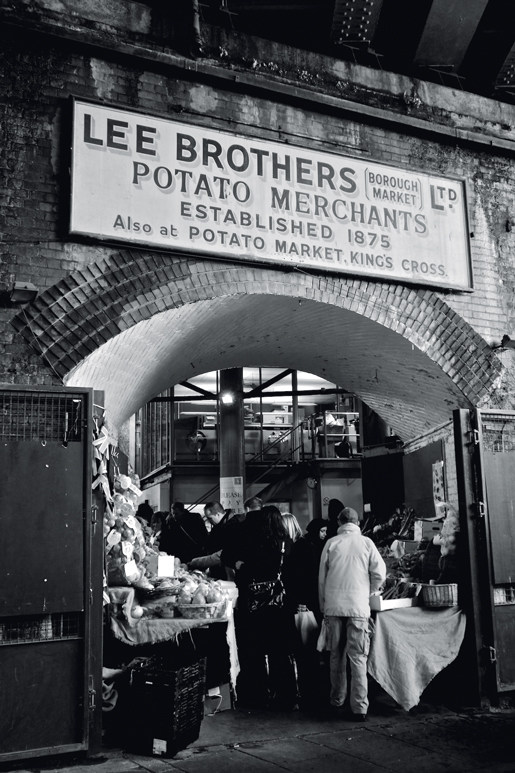 Huge dishes of Spanish paella and Thai green curry are simmering away as I pass, smelly cheeses stacked on counters have heads turning and ostrich and kangaroo burgers are winners here too.

You can guzzle a wheatshot that equates to dining on three days of green leafy vegetables and sip a carrot cocktail that makes you downright dangerous – or so the owners claim.

Even if you aren’t feeling peckish – the colours, sounds and sights of the market will seduce you and just reading some of the signs brings a chuckle. Feng and Sushi fish mongers assures shoppers “if our fish was any fresher you would have to slap it.”

Don’t leave the market without a pick-me-up at the flower-bedecked Market Porter pub – known for its real ales. Harry Potter fans may also recognise it from the big screen – it was transformed into the Third Hand Book Emporium in the film Harry Potter and the Prisoner of Azkaban. 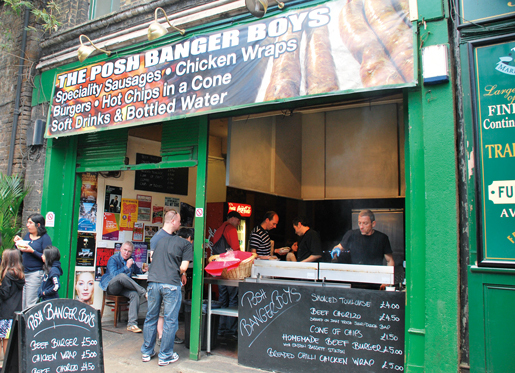 Dating back to 1885, it is the longest outdoor street market in Europe and stretches for one kilometre down Walthamstow High Street – so wear your walking shoes.

Stallholders offer everything from traditional Cockney favourites such as jellied eel and pie and mash to Caribbean treats. Household goods and clothing also feature. 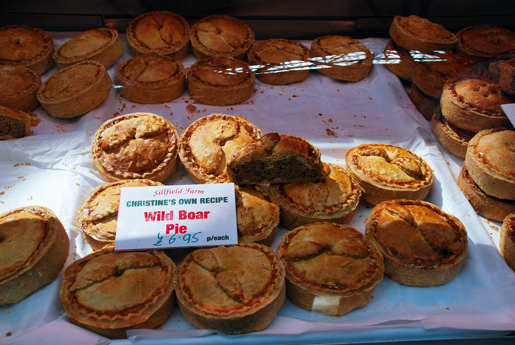 Wander along Portobello Road Market with its long string of antique stalls and you will find old furniture, lamps, vases, polished silver, bundles of cutlery and vintage clothes. You are also likely to spot Notting Hill T-shirts with Julia Roberts and Hugh Grant’s photos emblazoned on them.

The West London market became even more famous after it featured in the popular romantic movie, released in 1999. Sadly one of the film’s most notable landmarks, the blue door was sold, but the original Travel Book Shop is still there.

Originally a farm, the market area was named after the Caribbean’s Puerto Bello in memory of Admiral Vernon who captured the town in 1739. There’s nothing like being there on a Saturday, the main trading day, to experience the buzz of the bustling market and shops with its sights, sounds and smells. Buskers play their hearts out waiting to be discovered and there’s an excitement in the air as many embark on a treasure hunt.

I search for a keepsake and find a small silver jug which the stallholder tells me is a bargain.

“Don’t listen to her – halve what she’s asking,’’ whispers a local. But the stallholder isn’t budging on the price, so I move along.  I console myself with an ale at the Earl of Lonsdale Pub on the corner of Westbourne Grove and Portobello Road, an old fashioned wood- panelled pub with lots of charm.

For lunch it’s a chicken masala wrap made with naan cooked in front of you while the chicken sizzles in the pan. For a sweet treat we stop for cupcakes at Gail’s coffee shop on Portobello Road which are deserving of praise. Determined not to leave empty handed, I return to the antique stall and start negotiating. I leave triumphant with my silver milk jug – okay so she only knocked five pound off her original price – it’s still a steal. 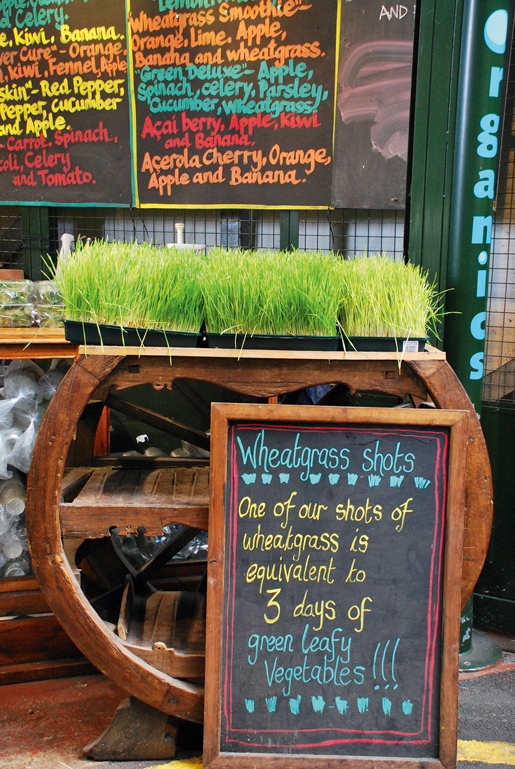 The Marylebone market is home to more than 100 antique dealers and attracts serious collectors.

Housed in an Egyptian-style art deco building, it opened in 1976 selling antiques and retro goods from the 20th century including vintage fashion and accessories, modernist furniture, costume jewellery and decorative arts. Follow the oak staircase to the Rooftop Kitchen for sustenance and enjoy panoramic views over London’s rooftops from the sunny terrace.

The bustling antiques village in Islington has an extensive range of arcades and shops. There are four separate market areas including Annie’s Market, Camden Passage Market, Charlton Place Market and Pierrepont Market. There are also lots of quality antiques, vintage clothing and retro shops.

Petticoat Lane Market is as intriguing as its name. It was first established 400 years ago by the French Huguenots who sold petticoats and lace there but it had a name change to Middlesex in the 1800s because the Victorians considered the reference to women’s underwear a little too saucy.

It is also connected to the fable that stall holders would steal your petticoat at one end of the market and sell it back to you at the other.

Walk down the East London market with more than 1000 stalls and there are rows and rows of clothing with some great buys – some too tempting to leave behind. The quality is not always great, but a couple of linen scarves I bought for a song – still look pretty good after many outings.

The market is especially known for its leather jackets and there’s plenty of choice with end of season lines heavily reduced. Vintage clothing lovers will enjoy scouring the racks and there is lots of bric a brac. I fall in love with a beaded bag I just have to have – another bargain that’s too good to leave behind. 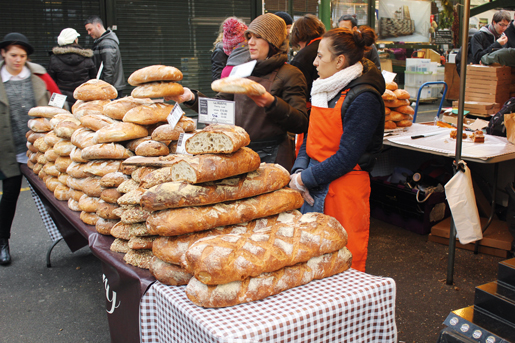 Located in the heart of East London’s Bangladeshi community, it is also near a crime scene of a Jack the Ripper murder. This market is housed in the Old Truman Brewery where up and coming designers show their latest creations. Home to weird and wonderful fashion, it doesn’t always come cheap. The area is also London’s curry capital.

Known for its cutting-edge fashion, Friday is fashion day at this market that often has up to 110 stalls. It’s a stomping ground for new eclectic designers who produce hip threads and a fair share of ‘look at me’ fashions. •

TravelCard provides unlimited travel on buses, tube and rail while the Oystercard is a pay-as-you-go pass for the tube only. Both can be pre-purchased from the VisitBritainShop online and paid for in Australian dollars. visitbritainshop.com/australia

There’s no bad time of year to visit London- you can always find an indoor market but it’s more fun in fine weather so visit over summer, from June through August.

Tale of Two Markets by Mind the Gap visits Borough and Brixton food markets on Wednesday and Saturday. mindthegaptours.com/eatlondon/