Cuba is an alluring step back in time and it is easy to be seduced by the passion of its people and culture. 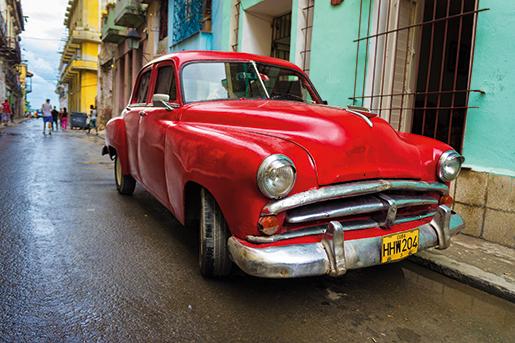 When it comes to securing their future, Eduardo and Marco have no qualms in using what their mamas gave them – their good looks and Latino charm. “We are male models,” they boast, sidling up to us on a sidewalk in Old Havana. “Oh really,” my friend and I scoff. “Well, we’re supermodels.”

Game on. Like many young men in Cuba, a potential romance with a visiting female tourist – age and looks irrelevant – may be their best chance of a one-way ticket from a country where they feel trapped, cut off from the outside world. They dream big: “I want to be a DJ in Ibiza,” 24-year-old Eduardo sighs, dreamy-eyed. “I want to live in Miami,” his best friend says. “My father is there, he escaped 20 years ago.”

For them, just conversing with people who frequent McDonalds and Starbucks and drive around in shiny new cars gives these young men a glimmer of hope. Despite censorship, glimpses of life in the West have filtered into Cuba via the (painfully slow and unreliable) internet, creating a generation of disaffected youth. And when we tell the boys what we love about their country – that it’s resisted globalisation, has wonderful old buildings and even cooler cars from the ‘50s – they just don’t understand.

Like many visitors to Cuba, I have been lured to this northern Caribbean island by the romance of the time warp. I wanted to see it while Castro was still alive, before it became the victim of the inevitable push to conform, before the old Chevys were declared unroadworthy and US tourists were allowed in. The fact that access is difficult, that it’s still a forbidden zone for so many people, makes Cuba a guilty pleasure that I couldn’t resist.

For Australians visiting Cuba, the easiest gateway is Cancun in Mexico, where there are frequent flights to Havana. The official party line states that a visa must be purchased prior to departure; this is an unnecessary inconvenience, however, with the 30-day tourist card available (for a much lower price) at the airport on check-in. 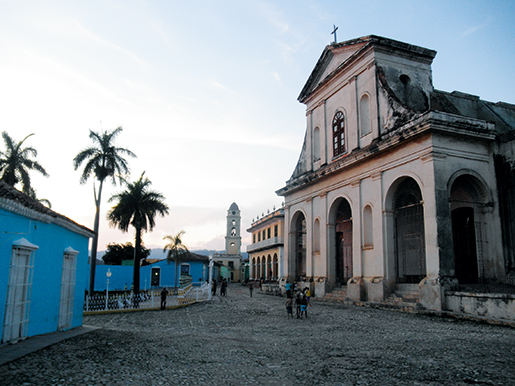 In another apparent ideological paradox, Cuba has duel currencies: local and tourist. Visitors use the ‘convertible’ peso, or CUC, which has been pegged at US$1, for all purchases; while locals still use the hugely deflated local peso. Understandably, there is a black market in the trade of the CUC, with Cubans keen to get their hands on the more valuable coins.

Although a large and beautiful tropical island, the focus for most first-time visitors to Cuba is its capital, Havana. This is the jewel in Cuba’s crown, one of the truly great colonial cities with ornate buildings, historic cathedrals, broad boulevards, presidential squares and atmospheric cobbled streets. Granted a World Heritage listing in 1982, its historic centre, La Habana Vieja (Old Havana), has been impeccably restored and possesses a grandeur belying its economic depression.

Founded in 1519 by the Spanish, the old city is bordered by El Malecón, a nine-kilometre avenue that runs along the waterfront. A popular walking promenade and car cruising strip, this spectacular roadway flanked by a sea wall is overseen by the palatial Art Deco Hotel Nacional de Cuba, a reminder of the heady, pre-Revolutionary days when Frank Sinatra and American mobsters ruled the Cuban roost.

A visit to this faded beauty is a must; order a cocktail, light a cigar, settle back in a cane lounge chair and hum along to a performance of Buena Vista Social Club classics by the resident band. Lining the walls of this former casino are old photographs of celebrity guests, including ‘Ol Blue Eyes, Ava Gardner, Winston Churchill and Eartha Kitt, as well as notorious mafia mobsters who in many ways brought Havana to its knees during the 1950s.

So decadent was the city during that era that a return to grass roots, via Castro and Che Guevara’s revolution in 1959, was embraced by the masses who desired a return to equality and justice. And to prove a point, Castro immediately reclaimed Hotel Nacional for the state, threw out the Americans and turned it into a dressmaking school for illiterate peasant women.

Another regular visitor to Hotel Nacional in its heyday was that ubiquitous barfly, Ernest Hemingway, who lived in Cuba for almost 20 years. Hemingway felt a kinship with the Cuban people, calling himself a ‘Cubano Sato’, or garden-variety Cuban, and he became a regular at several drinking establishments, imbibing cocktails that have since become synonymous with his legend.

“My mojitos in La Bodeguita and my daiquiri in El Floridita,” the author said, the signed quote still adorning the walls of the original La Bodeguita del Medio on narrow Calle Empredrado. Today, this tiny bar stills serves a superior mojito, lined up on the counter and ready to be imbibed for just CUC 4 (AU$4.50).

La Floridita is more upmarket, its bartenders in snazzy red jackets shaking up fruity daiquiris, overseen by a lifelike bronze statue of Hemingway, hovering in his favourite position at the end of the bar. A live band, oozing sex appeal, brings the wall-to-wall crowd to its feet with its salsa, son and rumba; the spirit is infectious, joyous, invigorating. 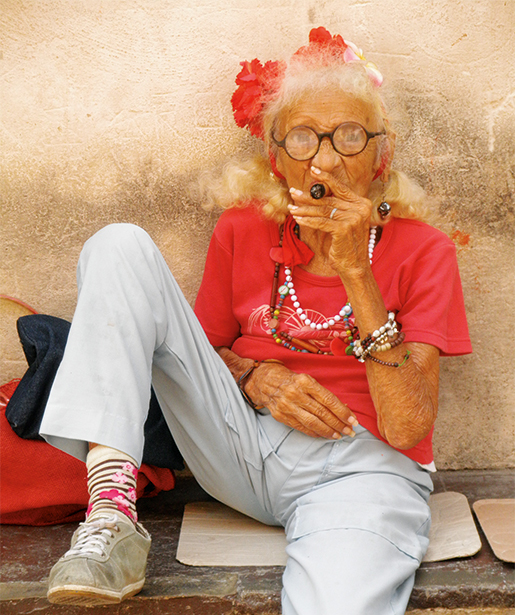 Havana is a cocktail drinker’s dream; not so a destination for gourmands. Frankly, the food in Cuba is pretty awful – stodgy and carb-heavy with a dearth of fresh produce, and delivered with the indifference of the public service mentality.

Most restaurants in the city centre are government-run, hence the ennui; far better to seek out the growing number of privately-run ‘paladares’, or home restaurants, that have cropped up in the past few years. Previously illegal, the government lifted a ban on private enterprise in 2010, which has transformed the dining scene in the country for the better.

Some of the best paladares in Havana are in hard-to-reach suburbs; but it’s worth the taxi fare to experience Cuban home cooking. Although relatively expensive (around AU$45 for two, including wine), La Cucina de Lilliam is one recommended establishment that offers delicious seafood and even vegetarian options, a revelation in a city where most vegos are forced to survive on cheese pizza.

It’s a similar situation with accommodation: don’t expect five-star service in any of the government-managed hotels, regardless of the grandeur of the building. For a more genuine and friendly Cuban experience, check into a homestay, or casa particulares, marked by a blue and white insignia. This is a particularly good option if you are travelling into rural regions, where comfortable beds are more difficult to find.

Aesthetically, however, the historic hotels in Havana are magnificent, and it’s worth peeking into the marble lobbies of grand dames such as Hotel Raquel, Florida and Sevilla in Old Havana for a glimpse of the city’s former glory. Expect to pay at least AU$150 per person for a room in a decent hotel, however; and keep your expectations low in terms of service.

Exploring Havana’s historic centre is easily achieved on foot, but don’t miss the opportunity to hail one of the brightly-hued old Chevy and Buick convertible taxis that line the main squares, spruiking for business. Fares are negotiated with the driver before the trip, and may be charged by the hour or as a package deal. Make sure that El Malecón is part of your route – it’s quite a buzz to feel the sea breeze in your hair as the old beauties splutter their way along the wave-lashed waterfront.

Flanking the historic tourist zone are narrow residential side streets, and it’s here that the ‘real’ Cuba is best revealed. Life in the crumbling, pastel-hued homes spills out into the street, pulsating with passion and family dynamics. Laundry is strung across narrow alleyways, children play in the gutters, and there is inevitably a voice raised in anger, excitement or effusive musical expression. Backyard mechanics tinker with clapped out cars; while walls are adorned, not with graffiti or advertising, but with revolutionary propaganda, evocative and proud. 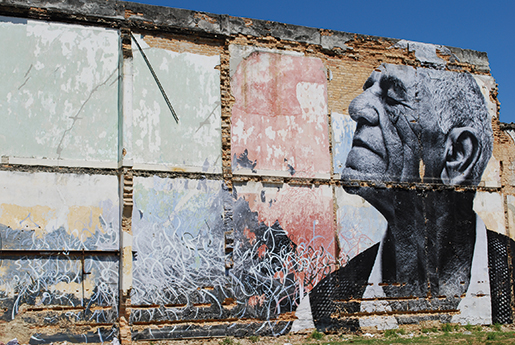 It’s also in these back streets that we begin to appreciate Eduardo and Marco’s frustrations. We can’t help but stare, open-mouthed, at so-called department store window displays, showcasing perhaps one style of shoe, granny undies and truly bizarre items such as garden gnomes perched on pineapples. What we would consider essentials, such as shampoo and soap, are luxury items in Cuba; we actually give away our hotel toiletries to regular people on the street, who seem eternally grateful for the gesture.

Travelling beyond Havana can be quite a challenge for independent tourists. Just securing a seat on an intercity bus is a time-consuming ordeal, clogged by bureaucracy. The buses are safe and clean, however, and while the journey can be slow, it’s certainly an entertaining and enlightening way of experiencing the Cuban countryside.

Located on the southern coastline, the historic city of Trinidad is well worth the long bus haul. Largely untouched by modern development and a designated UNESCO World Heritage site, it is one of the most beautifully preserved cities in the Spanish colonies, with gorgeous pastel-hued houses, original cobble streets and austere cathedrals. Here, locals literally dance on the streets, with outdoor salsa nights held on the steps of the tiered Plaza Major a fabulous way to get a taste of the vibrant Cuban social life.

And it’s this joie de vivre, the overwhelming passion and exuberance of the Cuban people, that resonates most evocatively. Travel in Cuba may be challenging at times, but it will forever remain in your memory as one of the most alluring, fascinating and unique destinations on the planet. Go now, while it retains its retro charm. •

The most direct route to Cuba is via LA to Cancun, then onto Havana. Air Cubana flies from Cancun every day except for Tuesday and Thursday. cubana.cu
When to Go

November to April is the cooler dry season, May to October is the wet summer season with the chance of hurricanes.