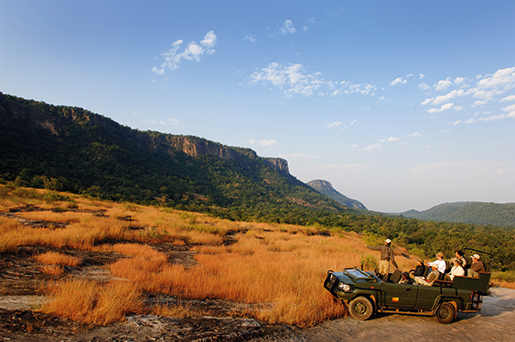 India might not come immediately to mind when you are planning a safari, but if you want to be in tiger territory, a safari in India ticks all the boxes.

My guide told me not to expect a sighting – seeing a tiger in the wild, even in this special place, remained somewhat rare. As we rolled out in an open-backed jeep in the pre-drawn gloaming − a pack of jackals yipping and hollering somewhere out there in the inky blackness − Allwyn Desouza, a guide with more than ten years’ experience, explained that many people arrive here with visions of tigers everywhere. But despite the fact that Bandhavgarh National Park is home to one of the world’s densest concentrations of tigers, those fantastical visions simply don’t match reality. In truth, tigers are wily beasts, and this isn’t a zoo.

Which made it all the more thrilling when I spotted my first Royal Bengal.

It took a while. After a fruitless morning of tracking tigers, doggedly following scat and tracks and triangulating the calls of other animals− who we heard sounding out warnings of a tiger in their midst− we came up empty, and headed just outside the park boundary to eat lunch. But then the word spread amongst the guides like wildfire – a tiger had been spotted. Desouza hastily tossed our food back in the cooler and we raced away, driving the jeep down the Bandhavgarh’s dirt tracks like a Formula 1 champ.

I heard him before I saw him. Desouza skillfully steered our jeep into a prime position, and, off to the left, obscured by a thick stand of trees and brush, the 280 kilo cat let out a roar so deep and full that I could feel it in my chest. A minute later he emerged from the forest and we saw his form in full—a proud, beautiful beast, stalking his native hunting grounds. I got out my camera and snapped away as he walked stealthily along the road for a few metres, before crashing back into the thick foliage. It was a thrilling moment – one that I will never forget. 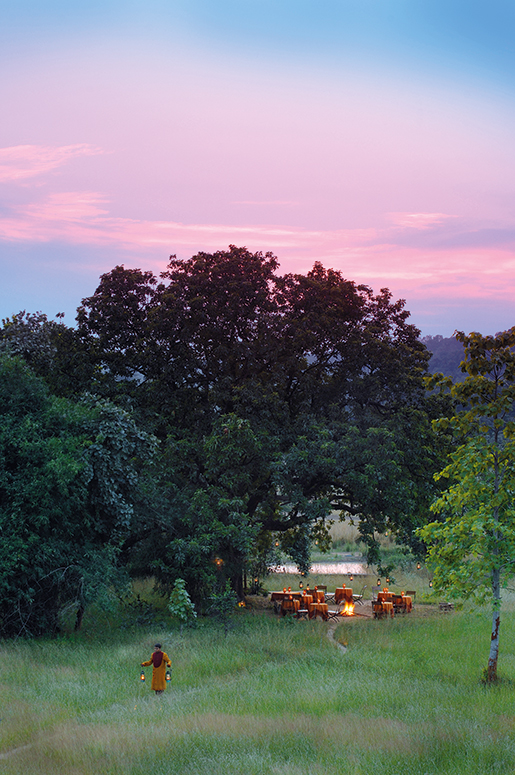 I was at Mahua Kothi Safari Lodge, a bastion of sophistication deep in the heart of the Indian state of Madhya Pradesh. Operated by Mumbai-based Taj Hotels and Palaces, who have teamed up with &Beyond to offer incredible safari experiences at four Indian lodges, Mahua Kothi sits right on the edge of Bandhavgarh National Park, a 105-square-kilometre preserve that’s home to a number of archaeological sites, plus leopards, langur monkeys, sloths, Sambar deer, wild dogs, rhesus macaques and the main attraction, some 65 Royal Bengal tigers – a staggering number when you consider the fact that as few as 3200 of these big cats remain in the world.

But just because I was deep in the wild, hundreds of kilometres from any major city, that didn’t mean that I had to rough it – at Mahua Kothi, I had a luxurious place to lay my head at night. Comprised of 12 bush villas known as kutiyas, plus a main lodge, a library/lounge and a swimming pool, the complex is spread over 16 hectares and connected by a network of footpaths. My kutiya was very comfortable, and featured authentic touches that imparted a sense of remoteness, exoticism, and 19th century adventure, including rough-hewn beams, hand-carved traditional wooden statues, and even an old timey phone. And its creature comforts were definitely welcome at the end of a long day on safari – a deep bathtub, a spacious patio, and a dedicated butler to bring me advice, warm drinks and even dinner.

But most nights, I dined in the main lodge, either next to a roaring fire on the ground floor, or al fresco, on the roof. Given the fact that many safari spots offer a very restricted menu, I was surprised when General Manager TK advised that dinner could be whatever I wanted – within reason. I hungrily ordered up some butter chicken, naan bread and other tandoori delights, and headed up to the roof, where TK joined me. As we looked out over the long grass and forest that surrounded us, he remembered various times when tigers had wandered extremely close to Mahua Kothi, often sauntering directly in front of the lodge’s front patio – within a metre or two of the chairs where guests often lounge. 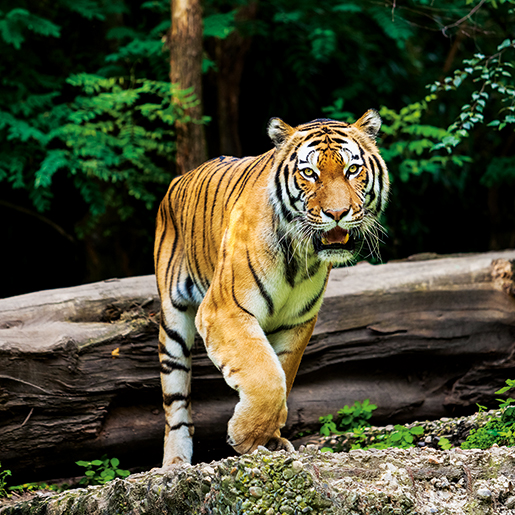 While he admitted that running a place like this in such a remote location can be a challenge, TK noted that they do their very best to cook with fresh, local ingredients using traditional methods. “Yes, some things must come down from Delhi. But people come here for a taste of this region – and that’s what we aim to give them,” he explained, as I eagerly dug into the feast that two servers had quietly presented before me.

The meal served as great sustenance for my tiger-hunting adventures, at which, it turned out, I was rather successful. After several forays into the park, in the jeep and also once on a trained elephant (tigers don’t mess with elephants, so guests can sit on a basket on their backs and get a great view), Desouza informed me  that I was his luckiest guest all season – I had managed to spot at least one tiger, and often more, on each of these excursions. Other guests thrilled at my stories and hailed my good fortune, even rubbing my arm in an attempt to garner some for themselves.

But of all my sightings, none matched the encounter I stumbled across − pure dumb luck for both Desouza and me − on my final visit to the park. Driving for hours that day along a pre-determined circuit, we’d had few of the sightings that we’d become accustomed to. Frustrated, and a little bored, we exited through one of the gates and proceeded back toward the lodge along the area’s main, paved road. One moment, the scene was normal – a teen rode toward us on a bicycle, and behind him drove a small motorcycle and an auto-rickshaw. In the next, everything changed, as the biggest Royal Bengal yet crashed out of the thick undergrowth alongside the road.

Quickly and expertly taking control of the situation, Desouza clapped loudly and let out a cry, temporarily scaring the animal back into the bushes. Signalling to his colleagues in jeeps both ahead and behind us, he stopped traffic, then maneuvered our vehicle into a well-chosen spot. We waited only a few minutes before the tiger again emerged, stalking and striding across the blacktop and within a couple of meters of our front bumper. It was the closest and most breathtaking sighting of my visit and it was over in a flash, as the orange stripes disappeared into the green foliage on the other side of the road. And then we’re off again, back to Mahua Kothi −where I had some butter chicken and naan waiting for me on the roof − and, of course, another great story to tell. • 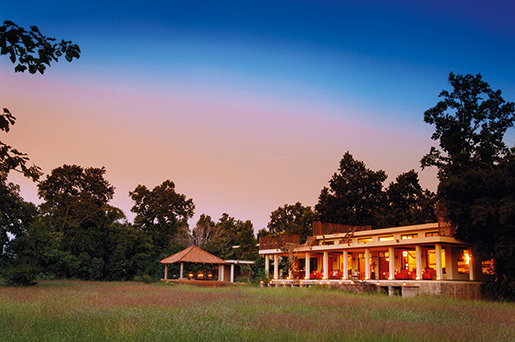 Taj Safari Lodges
Taj Safaris is a joint venture between Taj Hotels Resorts and Palaces with &Beyond, with guests able to enjoy Taj Hotel’s legendary hospitality together with &Beyond’s expertise in delivering an unforgettable wilderness experience. The four Taj Safari lodges all offer between six and 18 suites and operate safaris into nearby National Parks. Here’s a taste of the other three lodges.

Baghvan Pench Jungle Lodge
Located on the edge of Pench National Park and its teak forests, jungle streams, leopards, wild dogs and tigers, this is the very place where Rudyard Kipling set his Jungle Book. Guests can visit a local elephant camp at feeding time, get their hands dirty (or not) at a small, nearby potter’s village, or simply relax and read some Kipling in a luxurious outdoor machan. The lodge also offers twice-daily trips into the park to see the tigers, and comfortable accommodations in one of 12 bungalows, which are situated along a dry riverbed.

Banjaar Tola
Two separate luxury camps strung along the picturesque Banjaar River − bordering Kanha National Park − Banjaar Tola is known for its tigers and much more. Here, guests are housed in exotic tented suites, which feature private decks overlooking the river (and the wilderness beyond), raw timber furniture and pressed bamboo floors. In addition to the wildlife-viewing trips, you can enjoy a spa treatment on your deck, take an Indian cooking lesson in the camp’s kitchen, or even dance with the Gond and Baiga, two local highland tribes that visit the camp to demonstrate their lively, traditional moves around the nightly campfire.

Pashan Garh
Mirroring the dry-packed stone houses of the Panna region, Pashan Garh’s 12 hilltop stone cottages feature slate roofs, chunky sandstone walls and a sleek, sexy interior motif inspired by the crocodiles that inhabit the nearby Ken River. Located in the dramatic setting of Panna National Park − a place of steep ravines and plunging waterfalls, inhabited by tigers, wolves, sloths, hyenas and jackals − guests here can cruise the Ken to see the giant crocs, take nature walks guided by staff to view birds and wildlife on the property, and perhaps have a romantic dinner with your loved one in a private palanquin.

Getting There
Air India flies a triangular route between Delhi, Sydney and Melbourne touching down in Sydney first four days a week, and flying into Melbourne first on the other three days. airindia.com

When To Go
The best time to go is December and January – well after the monsoon – when temperatures are moderate and pleasant. The park is closed in July, August and September due to the high temperatures.