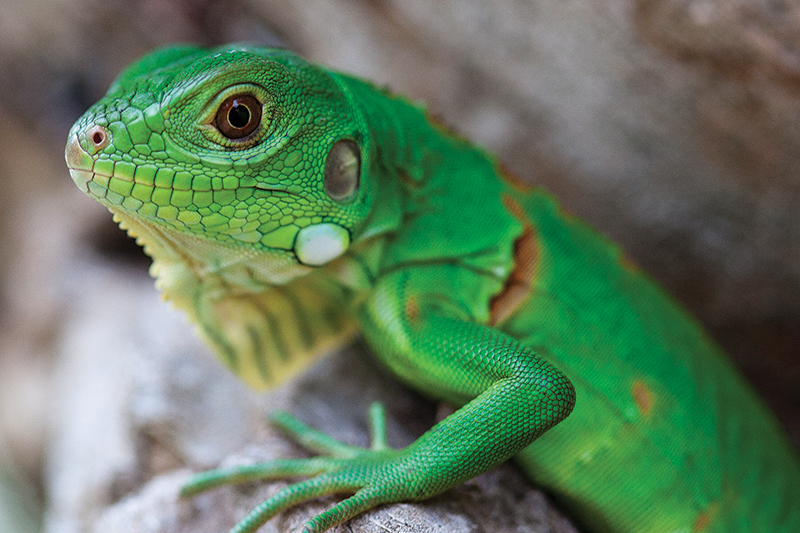 A bunch of water lilies shake on the river’s surface. From within them sound high pitch squeaks and snorts like a plastic bath toy repeatedly squeezed. Nearby a smooth, round, coffee-coloured head breaks above the water line, its dark oily eyes scoping us out. It’s a giant otter, and it stays long enough to release a snort before it dives under, leaving a mass of bubbles in its wake.

Moments later, closer to our boat it periscopically raises its sleek head exposing its cream-spotted throat, drops of water running along its catlike whiskers. It dives down under the water, reappears, gasps, snorts and dives down again. Soon joined by another two, the bevy work in a circular motion, their powerful long tails beating, churning up fish.
One emerges, a fish clamped in its jaw and glides back to the vibrating, squeaking lilies. The other two follow suit with fish-filled mouths back to the lilies and out of sight. The vegetation settles and is still, followed by sounds of ripping flesh and the crunching of bones.

At the back of our small boat biologist and guide Natalie points across the river to a smooth hole in the riverbank, a hold, where the giant otters sleep. Every night just before sunset the otters direct their two squeaking pups out of the lilies, across the river and into the hold. It’s too early in the afternoon for us to witness this family expedition and besides, our tour on Mutum River in north Pantanal has only just begun.

Located in Brazil, in the state of Mato Grosso do Sul, the Pantanal covers 150,000 square kilometres, almost the size of England. It is dramatically different within its two seasons: wet and dry. A mosaic of land and waterways, rich in biodiversity, there are 2000 different plant species and 600 different birds of which Natalie says 100 live in the north. It’s the end of the dry season and water is restricted to shrinking lagoons and the river, its water level low, keeps birds and wildlife living close to the edge.

The previous day, an hour’s drive from the city of Cuiabá, the sealed road ends and as we drive along a dusty dirt road in the surrounding farmland, birds and wildlife begins to appear. A toucan, its comical golden coloured beak appearing larger and heavier than its body and a giant anteater shrouded in a long shaggy coat with its long nozzle-like snout were the first signs we’d entered into the territory of the weird and wonderful. 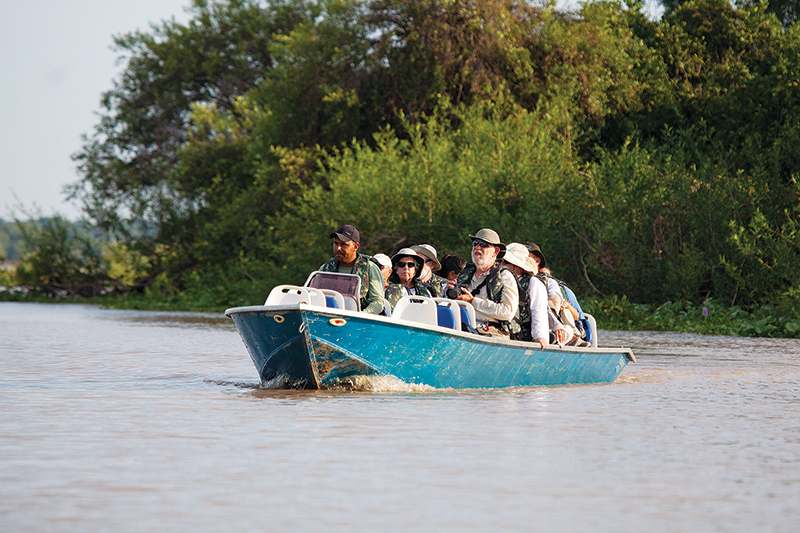 In one section termite mounds are so high and numerous they look like headstones in a cemetery. Ranching is a large part of the Pantanal and the nelore cattle, successfully introduced some 70 years ago, are the predominate breed because of their suitability to the extreme weather conditions.

Pousada do Rio Mutum is very comfortable accommodation, named after the long river nearby. Twenty air-conditioned rooms with ensuites are in lodges spread generously over a large grass area shaded by the enormous mango trees. Each lodge has a hammock and a concrete path that leads guests to the swimming pool, library, and large round dining room.

Dona Alice bought Pousada do Rio Mutum 17 years ago. She thinks ‘big picture’, working closely to support a nearby fishing community called Cuiabá Mirim, where a number of her staff originate. As well as the lodge, she owns another block of land, this one uninhabited for wildlife to flourish. “After working as a bank manager in a busy city always seeing customers complaining, I now love to see satisfied customers in the Pantanal.” 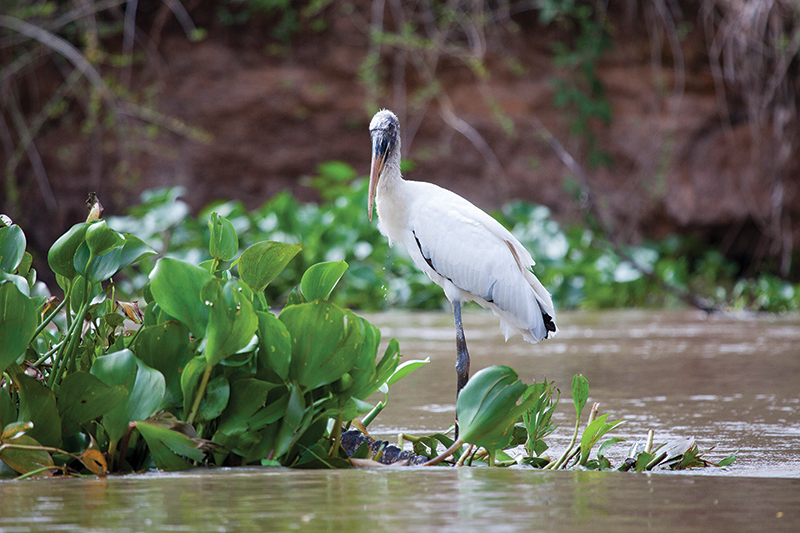 Wildlife spotting can be done by horse, jeep, motorised boat, canoe and hiking. A new method currently under construction is a boat suitable for staying on the river overnight so as to increase guests’ chances of spotting the ever-elusive spotted jaguars and four-metre-long anacondas.

Buffet meals, served in the dining room, are rustic dishes like piranha soup, fish stew, roast pork, rice, cassava, soybean lasagne, and feijao beans along with green beans. Desserts that follow always include fruit and an extra dose of sugar, a favourite is banana flambeau and coconut cream.

In the afternoon when the sun is fierce and the heat oppressive, it’s vital to conserve energy. While I loll about in the swimming pool, unaware, creatures soon appear moving about their daily business. Up above in the branches of a mango tree, red-shouldered macaws squabble noisily, hopping across the grass is the bird symbol of Brazil, a rufous bellied thrush, while the brilliant metallic blue wings of a blue morph butterfly dance mid air. In a tree hollow a baby green iguana blinks in the bright light.

HAPPY CHAPS
Much later, the sun suppressed behind clouds, we don chaps, take the reins and clamber into the saddle on our Pantanal horses. The Panteneiro horses were originally introduced by the Spanish and later the Portuguese from the 16th century onwards; they’re smaller and have adapted well to the varying climate.

Being elevated on the horse gives a different vantage point. Directly across in the branch of one tree, its wings beating at 80 times per second, is an emerald hummingbird, its plumage a dazzling green hue. High on some tree trunks is a tidemark, remnant from the wet season. Birds are abundant, we see a red legged seriema bird, a falcon and buff-neck ibis while two blue macaws fly overhead.

Back at the lodge, on foot, a dirt path by a forest and lagoon leads to a jetty on the cocoa-coloured water of Rio Mutum. A handful of long boats are beached on the riverbank near a resident group of capybara. A relative of the guinea pig, it’s the largest rodent, herbivorous, and can weigh up to 70 kilograms. Their brown furry bodies and blunt muzzles give them a cuddly bear look.
Piranha fishing off the jetty proves tricky, live bait jigged on a line off a bamboo rod is constantly pillaged. Quick and cunning caiman arrive without fuss, smaller than the crocodile they shamelessly lurk near the jigging bait with their jaws open. Eventually, a shiny, flat bodied, shimmery piranha is hooked. 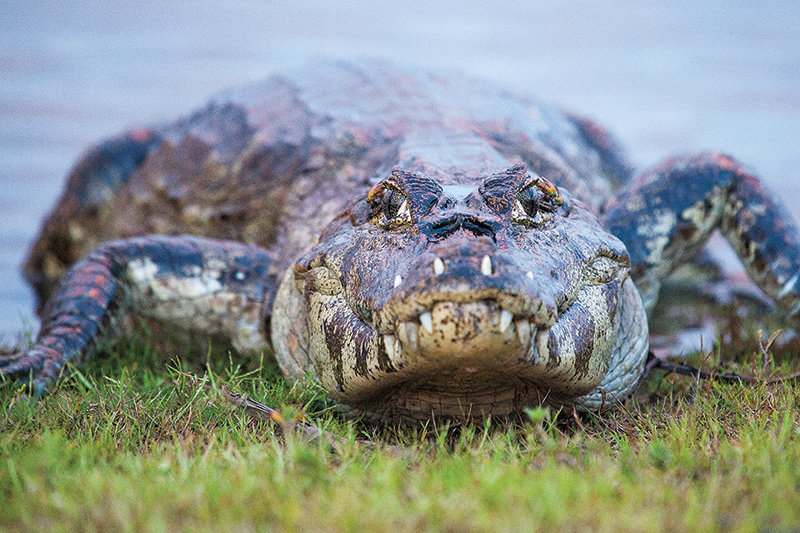 Later on our motorised boat ride after seeing giant otters, Natalie continues to point out the medley of wildlife. A tiger heron, zigzag heron and ringed kingfisher are some of the first birds on show. Cocoi heron sit in the treetop, a great egret gingerly stretches its neck forward over the still water. Two jabirus wade in shallow water. On the trunk of one tree cling the mouse-like bodies of small bats. Caiman rest on the riverbanks, their colour and texture almost a perfect camouflage.

In higher, denser branches a woolly black male howler monkey watches us from his prone position. Further along, a small comical face crowned by a tuft of hair pokes out from between large leaves. It’s a capuchin monkey, its name derived from the Capuchin Franciscan monks, an order who wear peaked hoods.

Later when the boat ride is finished and the others go for dinner, the sun almost set, Natalie and I paddle a canoe back down the river in the hope of seeing the adult otters shepherd their pups across the river into their hold. The lilies and the river are still except for the soft chirping of cicadas and odd honk from a caiman. Sadly we’ve missed them and instead watch the soft, broken red glow of the sinking sun reflect into the water.

Now dark and disheartened at not seeing the pups, I drag my heels while walking from the jetty back to the lodge. It’s a surprise to hear rustling and chomping outside the dining room, with my torchlight revealing a tapir nonchalantly devouring fallen mangos. The size and shape of a zebra, its resounding feature is its curled nose. It’s a thrill to see the largest land mammal on the continent; it reaches 1.1 metres high at the shoulder and can weigh up to 250 kilograms.

Like most of the wildlife we’ve seen, it completely ignores its human audience and continues with its business. It’s a reminder that the Pantanal is not only a twitchers’ paradise but is full of surprises, a melting pot of some of the most unusual, weird and wonderful creatures great and small. •

GETTING THERE
LAN Airlines operates seven non-stop flights each week from Auckland to Santiago, Chile, with onward connections to Cuiaba, the gateway to the Pantanal with TAM Airlines.
LAN: 1800-126-038; lan.com

WHEN TO GO
Dry season July to October when wildlife is more visible.

TOURING THERE
Eclipse Travel is an Australian and New Zealand travel company specialising in tailor made tours to Central and South America, and cruises to the Antarctic and the Arctic. Eclipse Travel can organise a 12-day ‘Explorers Route’ itinerary that takes travellers between Buenos Aires and Rio via Iguazu Falls and the Pantanal. The tour includes accommodation, internal flights and English speaking guides. 1300-575-752; eclipsetravel.com.au