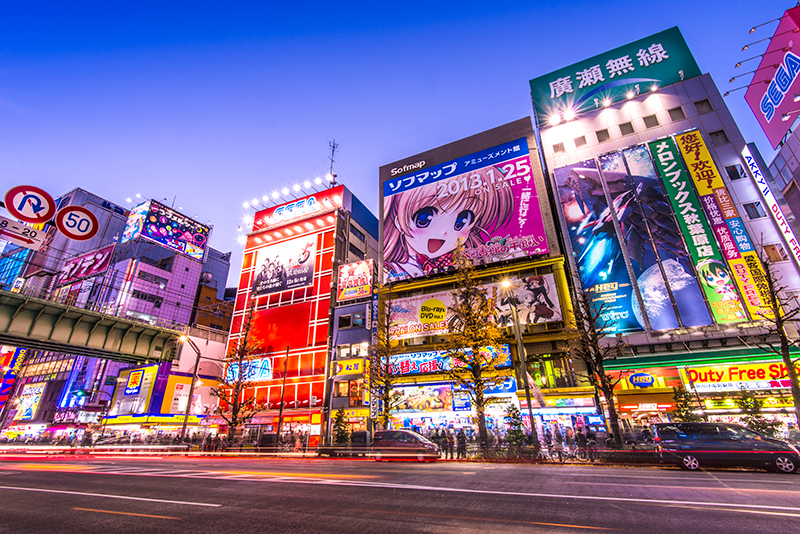 Japan’s capital is renowned as one of the world’s great shopping meccas. But beyond the gargantuan department stores are dozens of specialised streets and districts, each catering to a very different kind of shopper. 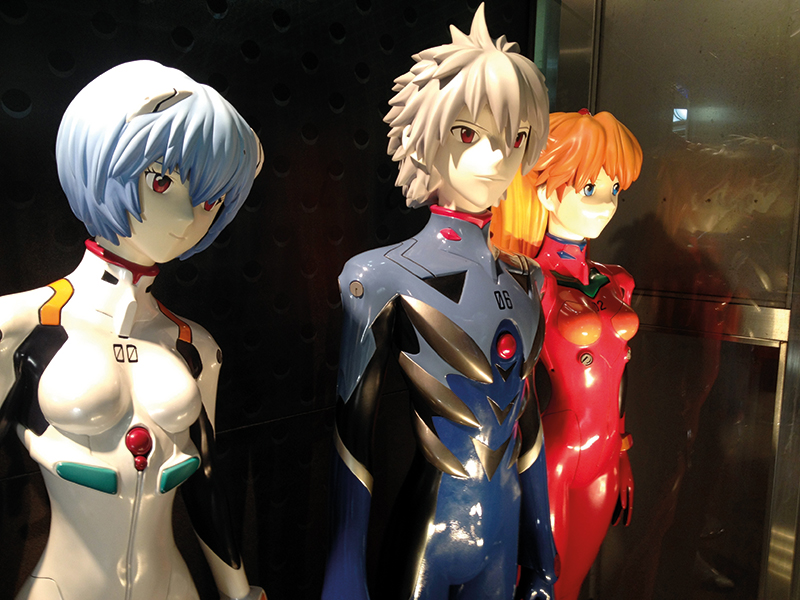 The modern electronics mecca of Akihabara, in Tokyo’s Chiyoda ward, is a titan of technology. Take your time to walk down Chuo Dori, the main street, before exploring all the little offshoot alleys offering consumers everything from one-man stalls specialising in electronic components, to colos sal department stores heaving with everything from the newest computers, cameras, televisions and mobile phones to whizz bang home appliances.

Akihabara is also ground zero for Tokyo’s otaku (fan) culture, making it the best place in town for both geeking out and shopping for the latest techno gadgets. You’ll find dozens of establishments devoted to anime and manga amongst the electronics shops lining its streets, the biggest being Mandarake Complex, eight floors of anime, superheroes, characters, Cosplay goods (costumes, wigs and accessories) and comics.

If you’d like to get your geek on, or to experience the otaku culture of Japan without getting swallowed whole by Akihabara, head to the suburbs to check out Nakano Broadway instead. This multi-storey mall contains numerous outlets spruiking new and second-hand manga, gadgets and gizmos, bizarre collectable action figures, rare toys and enough Japanese pop culture paraphernalia and gaming goodies to appease even the biggest anime aficionados or game addicts.

Hipster Havens
For a complete digital detox head to Shimokitazawa, in the Setagaya ward, a low-rise haven for hipsters that is just minutes from the neon beanstalks of Shinjuku and Shibuya and like something from a street art-strewn boho fairy tale.

The self-contained neighbourhood is packed with vinyl shops, music stores, intriguing bric-a-brac shops and too-cool-for-school vintage stores stocking everything from used couture to ‘70s throwbacks. It’s almost as if New York’s Williamsburg or Melbourne’s Fitzroy have dropped a Japanese trip. But there’s no glitz, no flash, and the relatively little neon has a touch of ‘70s Vegas about it.

When you’ve had your fill of vintage and vinyl, pop in to one of the tiny izakayas or a retro cool cafe to watch artfully grungy musicians popping in and out of smoky music dens, folks sucking shisha pipes on the footpath, Hawaiian-shirted hedonists delving into a tiki bar, and artsy types taking to tiny amateur theatres. 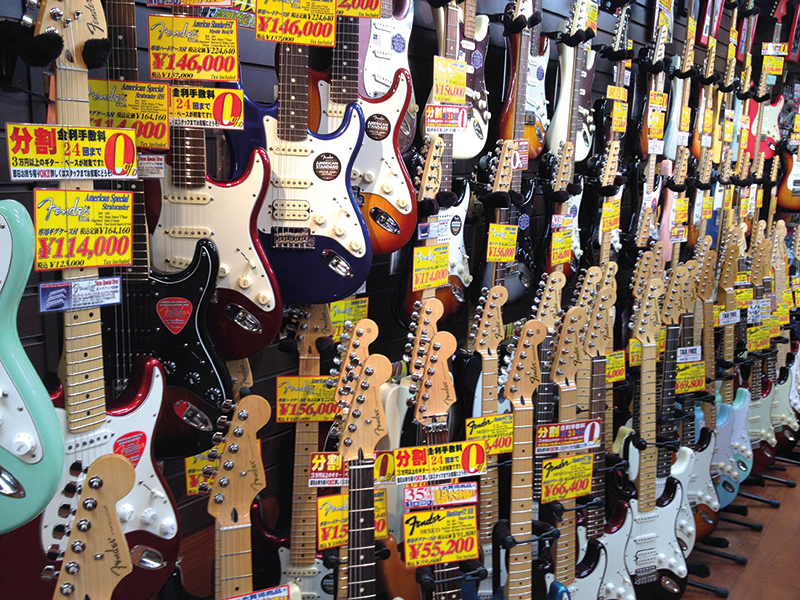 Wannabe rock stars will want to make the pilgrimage to Ochanomizu in Chiyoda ward. Why? Because Tokyo loves rock and roll, and Ochanomizu is home to what may possibly be the greatest, largest and rarest selection of guitars on the planet.

Take the Ochanomizubashi exit at the JR train station and you’ll find yourself on Meidai Dori, or ‘Guitar Street’, where you’ll be confronted with about 40 multi–storey music stores, each bulging with guitars and assorted stringed instruments like they’re on rock and roll steroids. You’ll find floors of Fenders and Flying V’s, basements chock full of Martin, Rickenbacker, Gretsch and shiny new Ibanez and rooms packed with wild custom creations, classic Gibsons and Epiphones, their locally made counterpart. Music being the global language that it is, the stores are all happy to let punters have a bash on the mind-blowing assortment of vintage and new guitars.

And if, like me, you feel like taking your new purchase for a spin, there are karaoke shops at the Yasukuni Dori end of the strip, where you can strut your stuff in private style in one of their karaoke boxes. 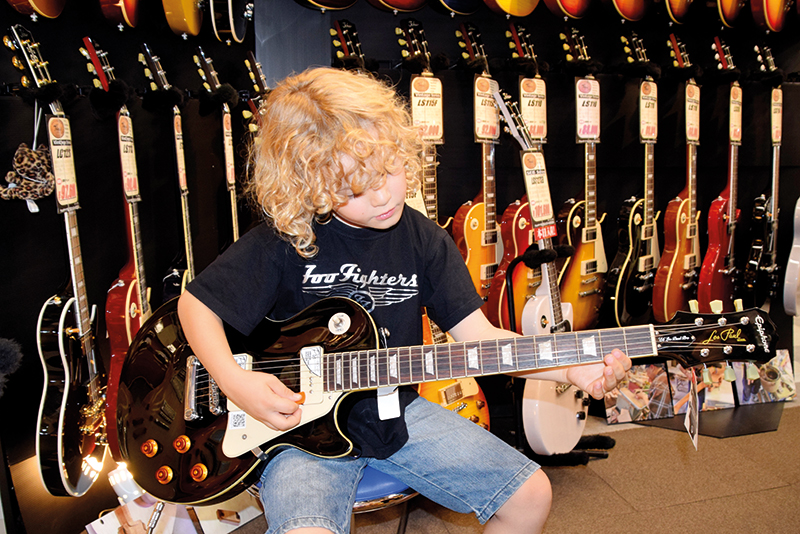 Nearby Jimbocho – an area popular with university students and intellectuals – is home to a concentration of about 180 bookshops, publishing houses, and literary societies. The intersection of Yasukuni Dori and Hakusan Dori is where the greatest proliferation of bookstores can be found and is known as Tokyo’s Book Town.

One of the largest second-hand book markets in the world, it is something of a revelation to this bona fide bookworm. Whether you’re into academic tomes, art books, best sellers, comics or cookbooks, you can easily lose hours rummaging through the shelves … as well as a pile of yen and a large portion of your remaining luggage space. Or is that just me?

Of course, much of the material is in Japanese but there is still plenty to excite the foreign bibliophile. Magnif Zineboch’s collection of beautiful second-hand art books and vintage fashion magazines transcend language. The Bohemian’s Guild has a decent range of arty foreign language books and Kitazawa Bookstore specialises in English language books, offering a wide variety of subjects and styles including a selection of intriguing rare antique books. 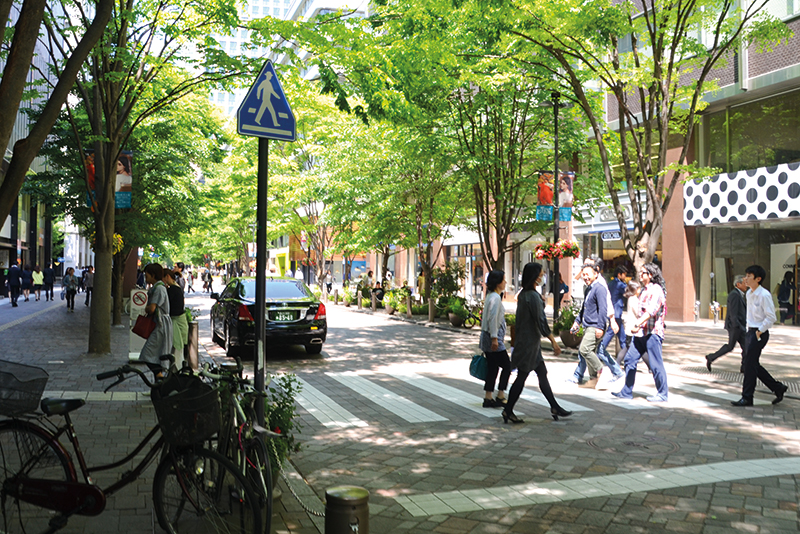 Take your sweet tooth to Ginza to explore an abundance of exclusive western-style luxury sweet and dessert shops decorously dotted between Hermès, Chanel, Dior and Gucci.

Between splashing the cash on high-end designer finds, you can nibble delicately on macarons at the ridiculously extravagant Ladurée store, stock up on authentic Belgian chocolate at DelRey, devour Crêpe Suzette at Henri Charpentier Ginza Maison or join the queues at Hidemi Sugino, a patisserie whose namesake chef was awarded the title of ‘Asia’s Best Pastry Chef’ in 2015.

There may be a distinct French flavour to many of the stores, but you’ll still find some exclusively Japanese treats like the sophisticated matcha-inspired wagashi (Japanese traditional desserts) at Jugetsudo’s tea shop or next level Japanese bean daifuku cakes made from soft rice wrapped azuki bean paste at Ginza Kanra.

At the opposite end of the sweet spectrum is the cheap and cheerful Ameyoko (Candy Alley) a busy, colourful shopping strip in downtown Tokyo lined with stores selling traditional Japanese sweets and cakes like karinto (sugar coated, deep fried cookies) and red bean cakes.

Tokyo Okashi Land, located underground in First Avenue Tokyo Station, is Japan’s first confectionary-themed retail zone, comprising stores operated by three of Japan’s top confectionary makers. With so many sugary temptations it may be worth finding out if Tokyo also has a Dentist Street before you visit.

While you’re in the bowels of Tokyo Station, take a short detour to Character Street because it doesn’t get much sweeter than this! In fact, there’s nowhere better in Tokyo to go Pokémon hunting than Tokyo’s kawaii (cute) strip. If it’s been merchandised, you’ll find it here in this underground mall in the basement of Tokyo Station! 26 stores stock official plush toys, gizmos, gadgets, sweets and accessories themed according to well-known Japanese characters from Hello Kitty and Miffy to Pikachu and Ultraman. 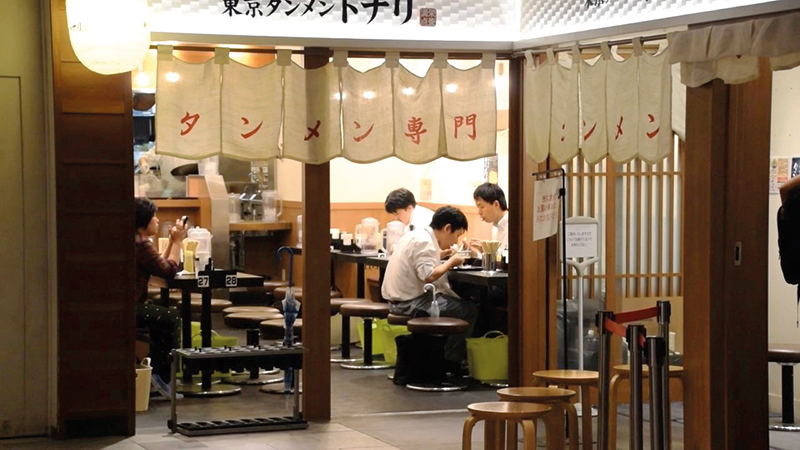 For the best Ramen in town, head to Tokyo Ramen Street, a street exclusively for ramen located within the labyrinth of passageways, shops, and restaurants underneath the heaving behemoth that is Tokyo Station. Here you’ll find queues of salarymen waiting to slurp the city’s best soup noodles. The longest lines are always at Rokurinsha, famous for its thick noodles served tsukemen-style with dipping sauce. Join them, it’s totally worth the wait.

Memory Lane, in the Shinjuku district of Tokyo, is more of a local hang than a tourist destination and the place for cheap yakitori. Sporting something of a somewhat cultivated shantytown vibe, try not to let its colloquial nom de geure “Piss Alley” scare you off, as the title dates back to a 1940s post-war Tokyo, where the area was better known as a place where black market traders got sozzled. The 60 or so bars and restaurants are really tiny, like two or three seats tiny, but the food is good. If you’re adventurous, look for Asadachi where you can nosh on horse meat, pigs testicles and farmed Chinese soft shell turtle. Or not!

Some like it hot. Very hot. If you’re one of those folks with a high tolerance for spicy food, Minato’s Shiba shopping street has earned itself the pseudonym, Geki-kara Street (super spicy street). Here you’ll find a proliferation of restaurants using the tear-inducing bhut jolokia, the world’s hottest chilli pepper.

Ryogoku is a district of the Sumida ward where you’ll find the sumo stadium, sumo stables, and other sumo related attractions including chanko restaurants. Chanko is a type of stew, chock full of meats and vegetables, that is best known as sumo food and extremely healthy when eaten in moderation – as opposed to the gargantuan servings the sumo scoff to maintain their remarkable waistlines.

The Tsukiji Jogai Shijo shopping street is the place to enjoy the freshest spoils of world-famous Tsukiji fish market. You’ll find loads of little restaurants where you can enjoy sushi and kaisen-don (rice bowls topped with sashimi), but if you want the best of the best, be prepared for long lines and an hour-long wait, even at 6am.

If you want to DIY when you get home, there’s Kappabashi-dori (Kitchen Town). The 800-metre stretch, between Ueno and Asukusa in Taito ward, is heaving with around 170 specialised stores selling everything a chef could desire, except for fresh food. It’s hard to miss as a giant chef’s head marks the entrance to the southern end of Kappabashi-dori and once you delve in to its depths, you’ll find an abundance of dishes, pots, pans, knives and utensils along with stores selling those plastic and wax food samples of everything from hamburgers to sushi, that you’ll spot all over Japan. •

Getting There
Jetstar flies direct to Tokyo (Narita) from Melbourne, Cairns and Gold Coast with connecting flights from all capital cities: 131-538; jetstar.com