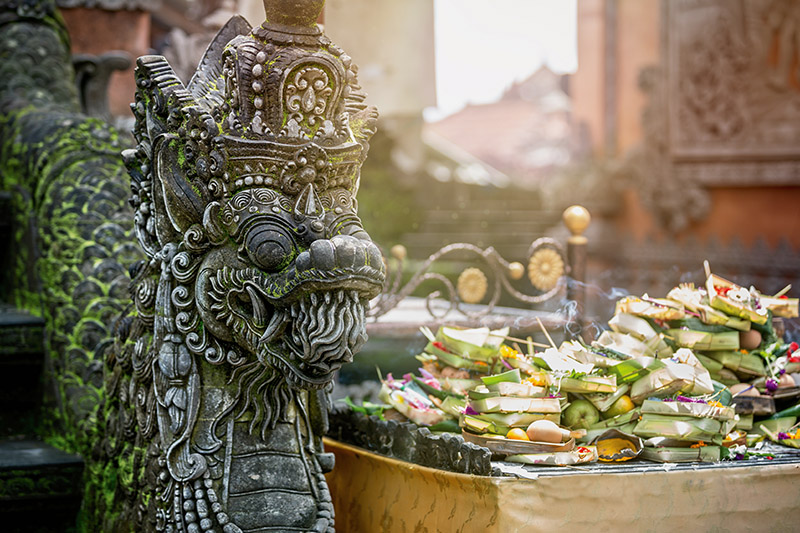 I’ve got plenty to process on the two-hour drive north from Denpasar to Ubud. I’ve somehow been invited to speak at the Ubud Writers & Readers Festival, one of the world’s great literary festivals,
alongside Someone Very Important, and the nerves aren’t going well.

Luckily, my driver’s up for a chat, and that Balinese friendliness is impossible to resist. “Aussies don’t have a season anymore,” he tells me. “They just keep coming, all-year round.” In response to the pressure, the government has built toll roads, such as the one stretching from Sanur to Nusa Dua via Benoa Harbour, so it’s now possible to  drive at a very un-Bali 100 km/h. 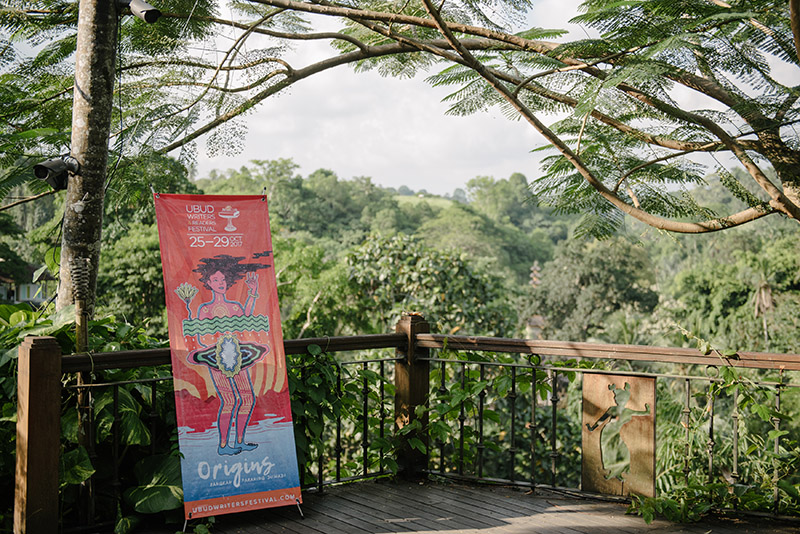 But why would you do that, when there’s jungle by the road, banyan trees arching overhead, pedlars and smiling kids and that warm, scented air?

I’m staying in a villa at the low-key Sapulidi Resort on Ubud’s southern fringe. The rooms resemble traditional huts – air-conditioned but otherwise authentic – set in a picturesque cluster among winding shady paths and rice paddies. The paddies are not ornamental: every morning the workers shoo the ducks away and tend to the bright green shoots, backs bent to the sun. Meditation, massage and yoga are the focus at Sapulidi: I’m awoken at dawn on the first day by waves of disembodied hollering from a laughter meditation session by the pool. 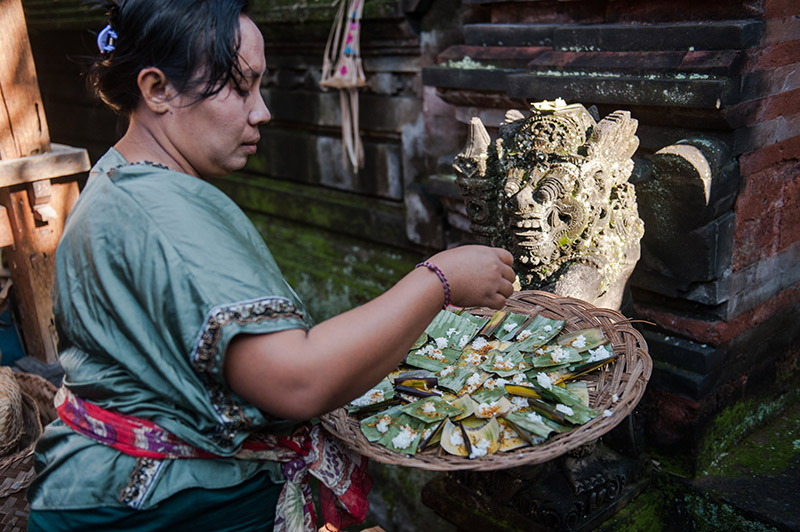 A wander from Sapulidi’s breakfast bar to the pool reveals a riot of tropical life: dragonflies on the reeds, a lizard scurrying vertically up a coconut palm with a butterfly in its mouth. And, in my room, the ever-present barking of geckoes. I become a little obsessive when I’m nervous, and soon enough I’ve developed a fixation: if I see one gecko on the walls, I have to find three. Or something unidentified and bad might happen. Usually, though, I can find a second and third within seconds of spotting the first one.

Ubud is no longer a sleepy timber village in the jungle. It’s a busy town, crowded with the ojeks and vans that fill the streets of Seminyak or Kuta. The main thoroughfare dips into a deep river valley near Bridges Restaurant where the jungle canopy drapes its fronds from dizzying heights, all the way down into the traffic. Passers-by on the footpath have tied the fronds into bows at eye-height. 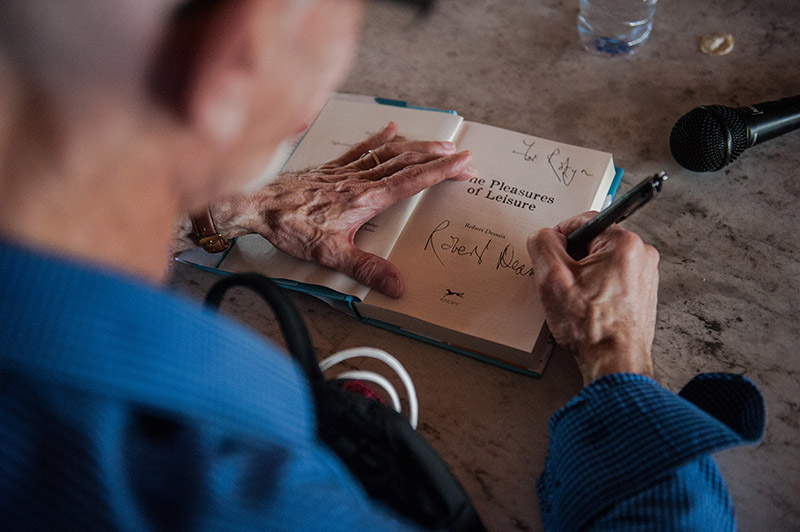 There’s a media event on the festival’s first night, held at the beautiful Alila Resort north of town. The setting is spectacular: a long, wide stone stairway descending to a breathtaking horizon pool (recently included in the Condé Nast list of the Top 50 pools in the World) and a misty jungle valley beyond. I’m alone at a party that looks like it will produce Salman Rushdie any minute. While studying the floating candles on its surface (and taking care not to fall in, in front of Australian writer Marieke Hardy), I meet Janet DeNeefe, the expatriate Australian powerhouse behind the festival and other Ubud highlights such as the Indus and Casa Luna restaurants. Janet wears the traditional kabaya with a scarlet sash and a sarong. She’s married to a local, speaks fluent Bahasa and manages a large team to organise the festival, which she says spans the entire year. But there’s no sign of stress in her conversation; on the contrary she’s relaxed and friendly. Janet’s lined me up to speak alongside Edinburgh crime fiction legend Ian Rankin. By all accounts he’s a wonderful guy but the idea of mixing it with Rankin – and the crowd he’ll pull – is frankly terrifying. I’m not sure whether to thank Janet for the gig or fake laryngitis. 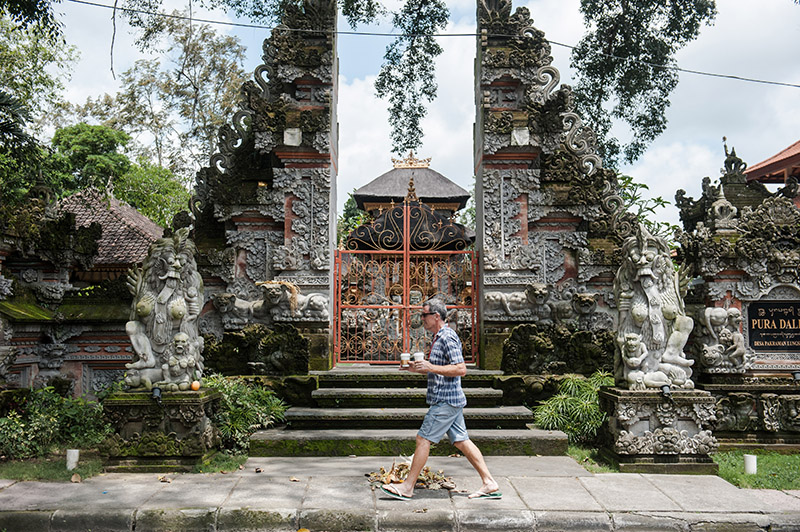 Between each of my Ubud Writers & Readers Festival commitments I’m in the hands of Ubud’s drivers. These guys (and they seem invariably to be guys) are the joy that countervails against the terror of Balinese traffic. One lent me his own power adaptor for the length of my stay. Another stopped mid-traffic so I could photograph something. They like a brief haggle over price but once it’s done, they’re all smiles. Nothing is too much trouble to them: everything is fun.

At the festival’s Gala Opening at the Ubud Royal Palace, there’s drums and dancing and food prepared at local restaurants. During dinner, I meet an eccentric elderly woman who’s thinking about going to New York Film Academy but can’t work out how to operate the camera on the table in front of her. 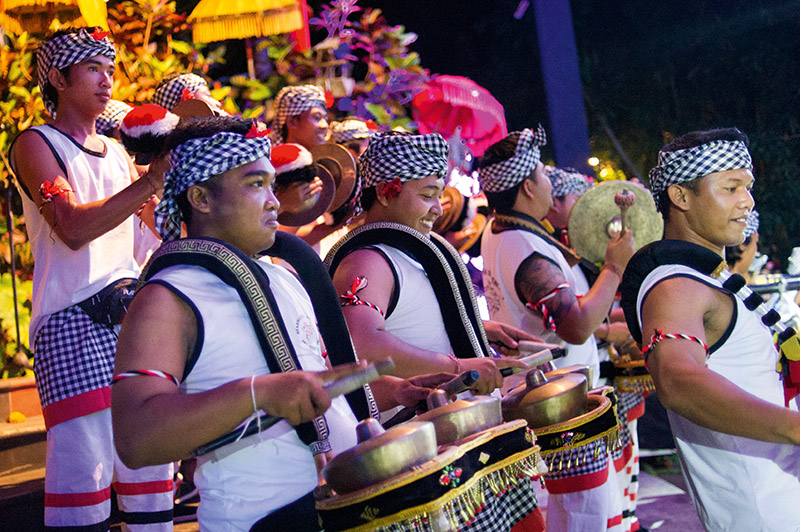 The appointment with Rankin looms. I’d tweeted from Tullamarine: he tweeted from Hong Kong International Airport. I tweeted ducks in a rice paddy: he tweeted a scorpion in his hotel room. I’m counting more and more geckoes as the tension builds. Over the days leading up to my date with Rankin, I get to see panel sessions with Tim Flannery, Simon Winchester, Kate Cole-Adams, the guy who created Minions and a documentary maker who lived in the Mentawai Islands for 10 years. Each is fascinating and well-attended: the speakers are total pros and the audience questions are whip-smart. There’s no room for bumbling. 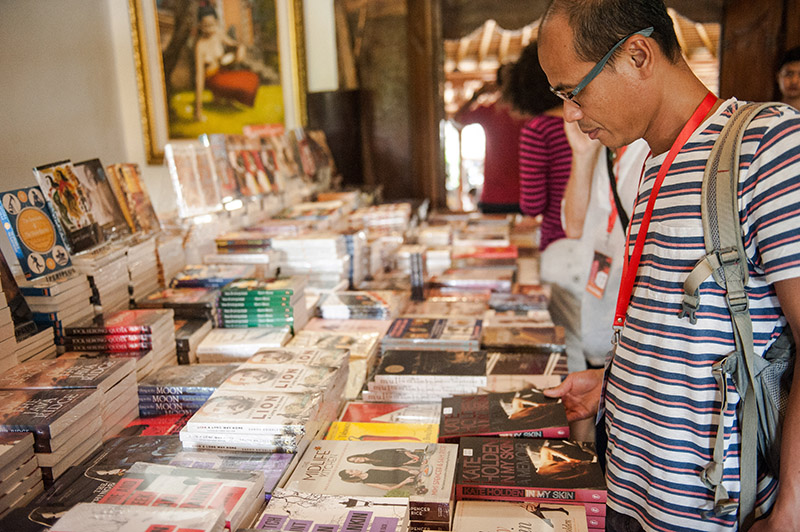 There’s a memorable lunch at Warung Pulau Kelapa, looking out at gentle rain over terraced gardens while I write. There’s cocktails at Naughty Nuri’s, a grungy old bar near the festival site that dates back more than 30 years – their whisky sour is perfect. While I’m enjoying one, a friend chooses to remind me that Rankin has sold 30 million books. Thirty million. I immediately start scanning the rafters for geckoes.

There’s a dinner at Plataran Resort, one of many high-end hotels that are disguised behind the crowded shopfronts. The stonework has a way of looking ancient: moss grows so fast in this climate that a wall might be centuries old, or younger than me. Although I dwell on this, it’s the people at the festival who move me more: Ubud’s not so much about the headline moments as the strangers you meet who might just change the way you think.

The day arrives, late in the program, when I must face my commitment. While I’m shaving I hear the familiar bark of a gecko and I scan the thatched ceiling. Two. And no matter how hard I look I cannot find a third. I go to the venue with a heavy heart, and find it crammed with eager punters. My heart’s beating out of my chest when Rankin shakes my hand and smiles. 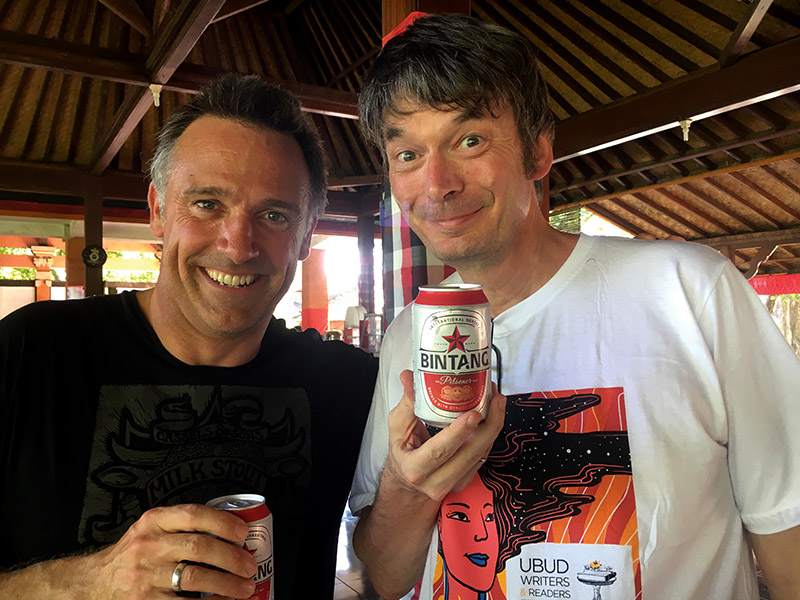 As we’re walking onstage we pass a bar. He stops, orders two beers and puts one in my hand, laughing.

And I know it’ll be alright. •

Jock Serong won the 2015 Ned Kelly Award for Best First Fiction in 2015 with his crime novel, Quota; was shortlisted for the Victorian Premier’s Literary Award for Fiction with The Rules of Backyard Cricket in 2016; and his third novel, On the Java Ridge, is a bestseller.

Getting there
Jetstar offers daily flights to Denpasar, Bali, from Australian capital cities. From there, it’s easy to hire a driver to take you to Ubud (90 minutes to two hours, traffic dependant). Be sure to compare prices. jetstar.com

Getting around
You can hire a scooter cheaply, but check that it doesn’t void your travel insurance. The traffic is such that you’re best off using drivers, or earning your Bintang with a walk.

When to go
Ubud has a rainy season (November to March), but it won’t affect the fun. The Ubud Writers & Readers Festival runs in the last week of October.

Further information
And if you’re doing the Festival… take a spare suitcase for books; get your hands on the program beforehand; and mark all the sessions you’ll want to see. There are multiple venues so you will need a plan of attack. ubudwritersfestival.com