I never thought I’d nearly get stampeded by an elephant or kiss a giraffe. But within a day of touching down in Kenya I’d experienced both. I exaggerate slightly, the elephant was a baby and was running to its dinner, but it did nearly run me over in the process. More about my giraffe kiss later.

Located in Nairobi, the Kenyan capital, the David Sheldrick Wildlife Trust is home to rescued orphaned-infant elephants. The elephant calves arrive at the nursery, flown in from all over Kenya, suffering severe trauma from losing their mothers and requiring 24-hour care.

The keepers armed with unlimited love and tenderness, and a magic milk formula that took 28 years to perfect by wildlife conservationist Daphne Sheldrick, nurture the orphans back to health. So far the Trust has rescued, rehabilitated and reintegrated more than 130 of the baby elephants back into the wild.

It was an amazing and at times overwhelming experience meeting the babies and their devoted keepers. To encourage international awareness of the Orphans’ Project and ensure sustainable support, the Trust offers a digital fostering program, allowing people from all over the world to make a difference to the elephants of Kenya. My wife and I are now the foster parents of cute little Boromoko.

After overcoming the emotion of meeting the elephants, which was aided by an incredible first class experience staying at La Serena Hotel, it was time to meet the giraffes at the Giraffe Centre in Nairobi. This is where I was kissed by the beautiful animal – two in fact. Standing high up on a verandah, giraffes Stacy and Ed stood a good 4m below.

After gaining their trust with pellets of food, the giraffes, who eat for up to 16 hours a day and only sleep for a maximum of 30 minutes, were happy to take the pellets from my mouth with their 40cm tongues. The result was a rather slobbery ‘kiss’ – a lovely goodbye as we leave Nairobi to start the safari. 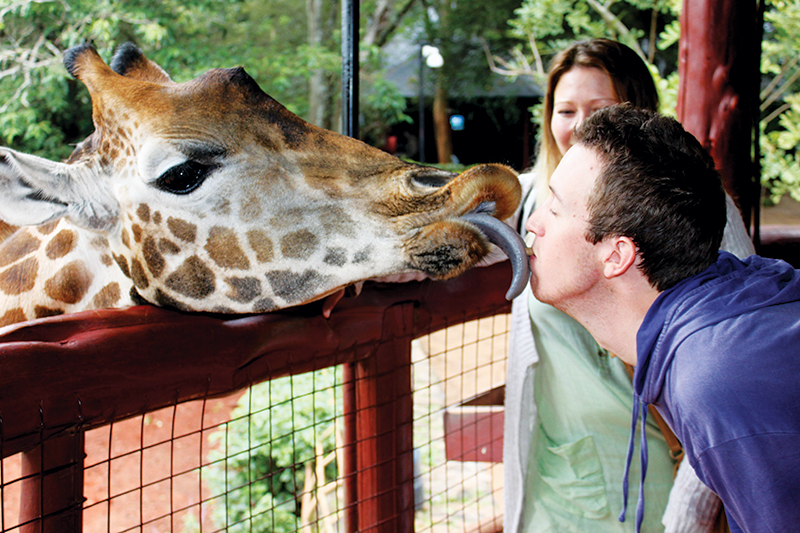 Just a few hours north of the capital is Lake Nakuru Game Reserve and on my first game drive I was in for a treat. Within minutes of entering the reserve I had seen zebra, buffalo, impala, waterbuck, baboons, and many different species of birds. Then came the first major sighting – white rhino. The monstrous animals did more than pose for the camera, with a pair deciding to mate.

After the excitement of the rhinos, suddenly giraffes started appearing, with a number of endangered Rothschild giraffes eating from the iconic African acacia trees. Then came a very rare sighting – two black rhino. We were lucky to spot these prehistoric animals. Only 37 exist in the entire reserve and just 600 across all of Kenya. The reason for such few numbers is their horns, with a single kilo of black rhino horn able to fetch up to $65,000 – sold mainly in Asia.

We stayed at the luxurious Elmenteita Serena Camp, set on the flamingo-fringed shores of the UNESCO World Heritage-listed Lake Elmenteita in the Soysambu Conservancy. As beautiful as it was, the big cats remained elusive and our group headed seven hours drive or just under 400km to Amboseli National Park, at the foot of Africa’s highest and the world’s tallest free-standing mountain, Mt Kilimanjaro.

Standing at 5895m, the snow-capped peak of the famous African symbol seemed to float, contrasting against the blue sky. It isn’t always visible, often obscured by cloud, but it came out when it mattered for me – dawn and dusk. Staying at Satao Elerai Camp, in five-star deluxe tents with private verandahs overlooking the mountain, there are no fences segregating the adjoining national park. This meant the nearby watering hole is often frequented by elephants and other animals.

Our various morning and late afternoon game drives into Amboseli National Park provided unbelievable animal spotting opportunities. At one point we came across a herd of elephants, with babies, just metres from the road. On one occasion the magnificent animals were having a mid-afternoon nap, much to annoyance of one of the little ones, who kicked the dirt and stamped about in frustration. For those susceptible to cute animals, I also saw a baby hippo climb up onto its mother’s back.

Then word filtered through to our brilliant guide Kevin, that a lion had been spotted. For the first time my heart started to race, as Kevin floored the Land Cruiser and had us expertly hurtling to the location. From 100m away we watched a family of lions hunt a buffalo, but the resilient beast wasn’t ready to give up yet, escaping to live another day.

Watching the sun disappear around a campfire with Mt Kilimanjaro nearby, gave me a chance to experience the Kenyan savannah at night. To think that some of the world’s most feared predators were patrolling nearby made the experience even more exciting.

After meeting locals from a traditional Masai village as part of the Elerai Masai cultural experience the following day, it was time to say goodbye to Amboseli and take a short flight to the Masai Mara Game Reserve. It was here that we encountered something many visitors rarely see. Just before the sun disappeared on the late afternoon game drive the discovery was made. Two lionesses were stretched out in a tree, while others lolled around happily in the grass nearby.

To be metres from the beautiful and powerful beasts was something else. Despite spending less than 24 hours in the reserve I spotted more animals than I’d seen so far during the trip. A large herd of elephants crossed the road a few metres away from our vehicle, many extending their trunks towards me, as if waving.

Once again it was difficult to leave our accommodation, this time perched high up on a bush-cloaked hill at Masai Serena Safari Lodge, but the nearby Mara North Conservancy was calling. It was here that I experienced the best day of the safari and perhaps the best day of my travelling life.

After checking in to the Karen Blixen Camp, which provided luxurious ‘tents’ set on the Mara River, complete with a giant family of hippos, we headed off for another game drive. After leaving the longer grass of other national parks behind, which would soon disappear during the mass wildebeest migration, spotting animals was much easier. We had also transferred to an open safari truck, minus windows and a roof.

I didn’t think too much of the lack of security until our guide approached a small hill and I spotted some movement. Then more movement. There in front of me, perhaps 8m away, were four lionesses sleeping in a twisted group of legs, and seven cubs nearby. 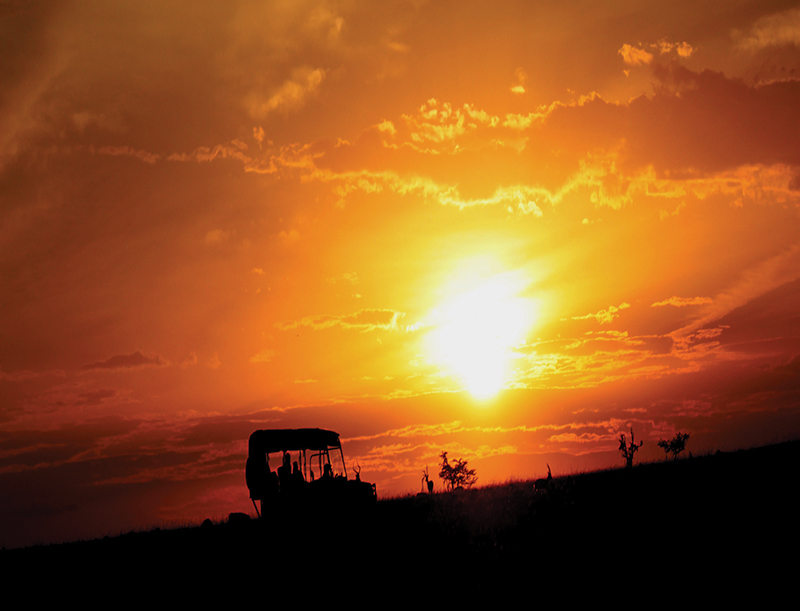 The mothers bathed in the hot afternoon sun, just as my cat does at home. The six month old cubs were tired too, often nuzzling each other lovingly in a dazed sleep. The experience is hard to describe, but it was unlike anything my pervious travels had offered up.

The lionesses, even the cute cubs, were magnificent animals. Every few minutes a lioness would stretch out and open its mouth, exposing huge teeth and striking a little fear inside me. But just as quickly, she’d fall back to the ground with a loud thump, and resume sleeping. After what felt like a few minutes, but was actually more than a half hour, it was time to leave the lions. Riding an incredible natural high, I wasn’t prepared for our next sighting.

Minutes later we spotted a cheetah sitting proudly atop a small hill. The sleek and colourful animal let us drive to within six or seven metres. We were so close that my camera flash actually lit the cheetah up. Not that I risked antagonising her with the bright light often. With the sun setting I spotted jackal, hyena, and a long list of other famous African animals – some looking to hunt and others to hide.

Instead of heading straight back to camp that night our group enjoyed another spectacular African sunset, eating and drinking happily and reminiscing with new friends on our Kenyan experience. The animals had made the trip memorable, but the beautiful Kenyan people and luxurious accommodation had made it unforgettable.

I felt completely safe from the moment I arrived to the moment I reluctantly boarded the plane home. Kenya can’t be a place you visit one day – you need to visit it now. •

When to Go
The best wildlife viewing months in Kenya are during the dry season from mid-June to October. The wildebeest migration generally reaches the Masai Mara by July and remains until October when they move back to the Serengeti in Tanzania. Wildlife viewing is good year-round, but this can differ depending on the park.

Who to Travel With
Kenya is a safe place to travel, but it is still a country where you want the experts to do the hard work leaving you to relax. Specialist African safari tour operator Bench International offers packages including accommodation, all meals, transport, guide, and park fees. Their tours use expert local guides from Southern Cross Safaris. There was not a single question our guide Kevin didn’t answer passionately and articulately, and his incredible knowledge of the various parks ensured we saw wildlife that many others missed.
•    Bench International: 1300-237-422; benchinternational.com.au

Where to Stay
I’d advise you to let the people at Bench International sort out your accommodation, but should you want to do it yourself I recommend the various Serena Hotels. They offer luxurious hotels, lodges and camps in national parks and reserves all over Kenya and in other African countries.
•    Serena Hotels: serenahotels.com
Two other first class places are Karen Blixen Camp set on the banks of the Mara River, and Satao Elerai Camp set at the foot of Africa’s largest mountain, Mt Kilimanjaro.
•    Karen Blixen Camp: karenblixencamp.com
•    Satao Elerai camp: sataoelerai.com

Where to Eat
If you get a chance (and you’re not vegetarian) you must dine at Carnivore. The open-air restaurant in the Langata suburb of Nairobi features all-you-can-eat meat charcoal roasted and carved at your table. They serve a wide variety, including incredible lamb, and are famous for their game meat. Remember to bring your appetite. tamarind.co.ke/carnivore

What to Do
While Mombasa boasts beautiful beaches, for me Kenya is all about safaris. The diversity of game in Kenya is astounding. From the big five to the small five, Kenya’s game parks, reserves and other wildlife protection areas host some of the wildest game in the world.