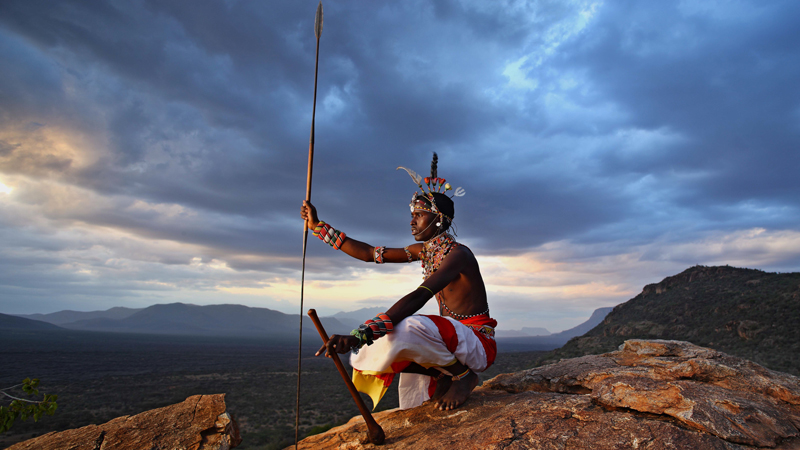 East Africa. The words conjure up visions of wide, open plains, big game and khaki-clad explorers. If you’ve been, you might have more vibrant mental imagery: the flamboyantly dressed Samburu warriors, the tapestry of the Masai Mara when seen from a hot-air balloon, and the fascinating way the escarpments of Great Rift Valley drop dramatically towards the Rift Valley lakes.

I had the good fortune to visit East Africa recently to discover the very best Kenya and Tanzania had to offer – from deluxe safari lodges to electrifying experiences. After a comfortable but very long flight, we arrived at Nairobi’s international airport, Jomo Kenyatta. The first thing that hit me was the rich smell of Africa.

You know you’re deep in Africa when you pass a national park within minutes of leaving the airport. Our driver rattled off a few other landmarks, which I’ll admit were a bit of a blur, and then it was bath, dinner and bed at our city hotel with dreams full of elephant and lion and cheetah. 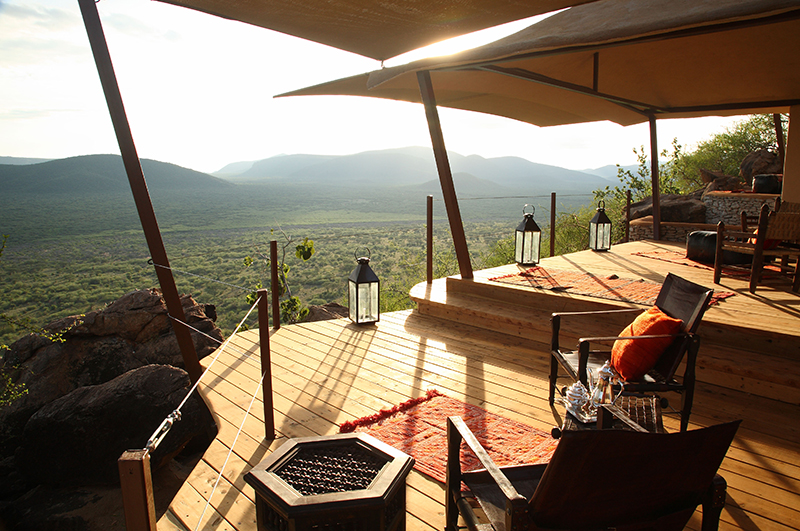 You can push aside any thoughts of sleeping in while you’re in East Africa. There’s simply too much going on, and much of it happens at the crack of dawn. While this isn’t strictly true when you’re in the city, we rose early anyway, keen to start our safari, custom designed by Wildlife Safari for us – something they do for most of their guests.

One of the first things I noticed was the hilarious, over-the-top names of the businesses we passed, which, as a word lover, I was thoroughly tickled by. The (very dilapidated) White House Hotel. Run For Your Life International Chapel. The Well Hung Butcher. And so on. Immediately I decided Kenyans were either very ambitious or simply great fans of the tongue-in-cheek.

I was also overwhelmed at how verdant the land is. The guide, who used to live in Tanzania, said they used to joke that if you plant a broomstick in East Africa, it would grow – and I can almost believe it! 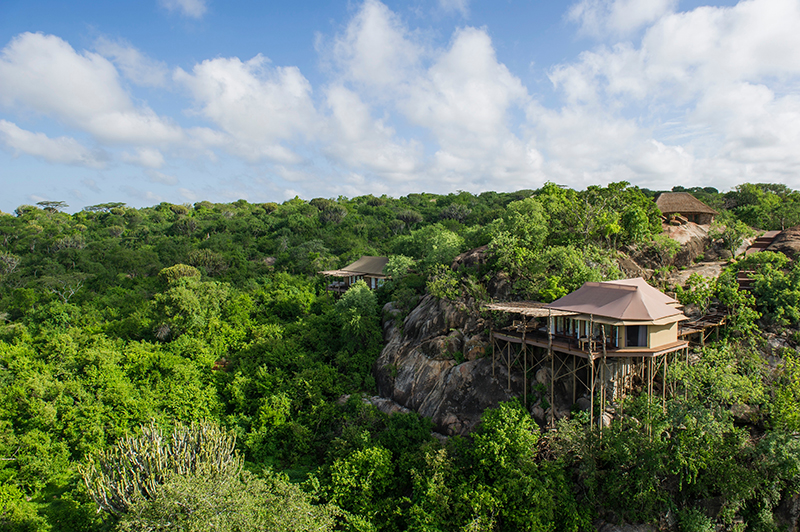 Both of the guides have been working with Wildlife Safari for more than 30 years, and they offered a wealth of insight into the places we visited. From overviews, like how the infrastructure had evolved over the years, to fascinating nuggets, like which trees the locals use to brush their teeth. And what they didn’t know, they found out; when Leonard couldn’t identify a seasonal herb I asked him about, he looked it up in his field guide, and showed it to me the next day (a kind of Boraginaceae).

Up, up and away

Of all the things we experienced, a few really stood out. Hot-air ballooning is something not to be missed when visiting East Africa. You can do it in several places, but we had the awe-inspiring adventure of drifting over the Masai Mara National Reserve early one morning. Located in the Great Rift Valley, the Masai Mara is one of the most popular tourism destinations in Kenya with its vast tracts of open grassland. 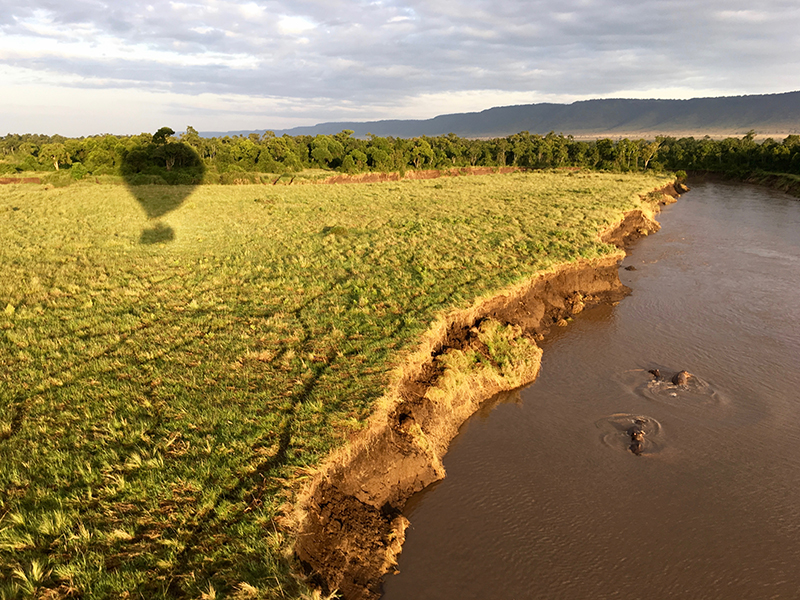 As the sun’s rays stretched out to light up the corners of the wilderness, I got a renewed perspective on how massive it really is. I especially loved how, from above, you can clearly see the tracks the animals make on their daily commute to the Mara River and back, a flurry of footprints in various forms: hippo, giraffe, impala and more.

In a nod to the Meryl Streep and Robert Redford classic Out of Africa, we visited a picnic spot shown in the movie – and on the poster – at Angama Mara. The romance of the movie comes flooding back as we look out over the plains.

The Serengeti, which adjoins the Masai Mara, is equally impressive. Here we caught the vanguard of the Great Wildebeest Migration as it trudged through the Grumeti Reserves: hundreds and thousands of hooved feet marching as one in an on-going quest for fresh grazing. Had we arrived a little later, we would have witnessed them crossing the Grumeti River, braving the snapping jaws of the fat crocs that frequent its waters. The migration takes place between July and November with around 1.5 million animals making the perilous journey – it really will blow your mind. 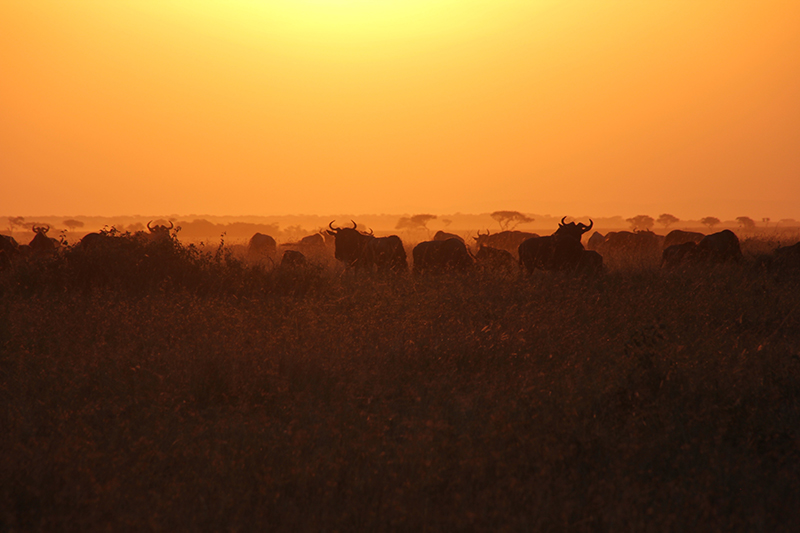 Another wild place that blew me away was Ngorongoro Crater. Covering some 300 square kilometres, it’s the largest unbroken (and unflooded) volcanic caldera in the world. It’s also quite literally teeming with game – so much so that it’s almost too easy to spot the Big Five. It was here that we had the strange experience of seeing an antelope following a lion around, quite literally keeping its enemy close…•

Getting there
Emirates flies to Nairobi and Dar Es Salaam from Sydney, Melbourne, Brisbane and Perth on a daily basis: +61/1300-303-777; emirates.com

When to go
June to October is the best time to visit, as the weather is cool and dry. For the Great Wildebeest Migration, go to Tanzania’s Serengeti in June and July, or Kenya’s Masai Mara from July to September. 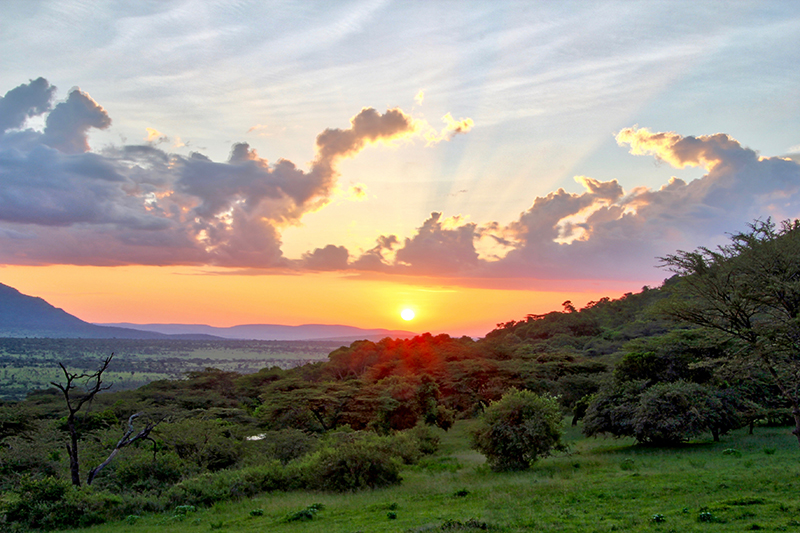