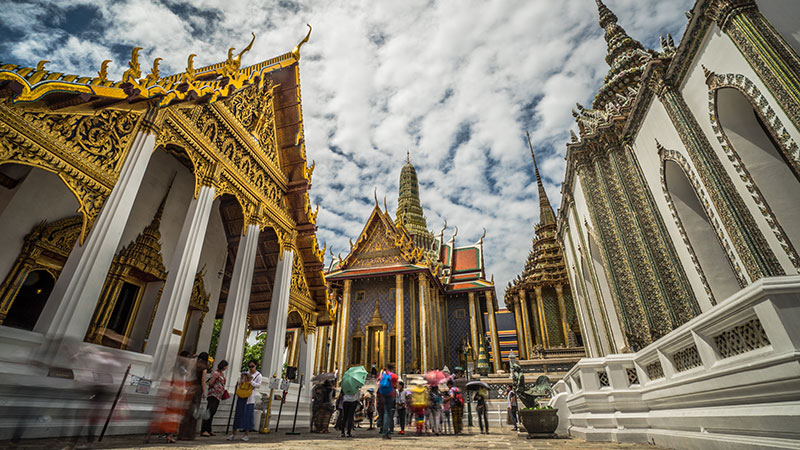 Taking place over three consecutive days, from 13 to 15 April, Songkran the longest and grandest festival in Thailand and one of the most famous celebrations of national culture in the world, making it the highlight of the country’s annual calendar, for both locals and tourists alike.

If you’re lucky enough to be in Thailand during the special time of Songkran, it pays to know about its background, local traditions, what happens, where celebrations are taking place, and of course, how to stay safe while making the most of it.

Derived from the Sanskrit word “saṃkrānti”, literally meaning “astrological passage”, Songkran is based on the Buddhist / Hindu solar calendar, and refers to transformation and change over. Festivities coincide with the rising of Aries, which is traditionally marked with water splashing to symbolise the cleansing and washing away of any misfortunes or bad luck from the previous year and rejuvenating for the brand new year ahead.

During this time, the streets of Thailand turn into one giant water fight party, so arm yourself with a water gun and prepare to get very wet upon leaving the safety of your room during Songkran!

In addition to the all night parties, fireworks, music, dancing, and delicious Thai food, there are also plenty of more traditional and sacred practices to participate in or simply observe and enjoy to celebrate Songkran, such as merit-making, visiting local temples and offering alms to the Buddhist monks, water pouring on Buddha statues to symbolise purification, paying reverence to ancestors and visiting elders.

In Phuket, Patong Beach hosts most of the celebrations, with the main strip of Soi Bangla hosting a Buddhist profession, floral parade and traditional Thai beauty pageant, as well as plenty of water throwing, while many of the Thai islands in the south, such as Ko Phi Phi, Koh Tao, Koh Phangan and Koh Samui, condense their celebrations down to one day, with main events taking place on 13 April.

However you choose to celebrate Songkran in Thailand, being prepared for the madness and staying safe will ensure you get the best out of your experience. Travel Insurance Direct’s travel safety expert, Phil Sylvester, advises against traveling by road during the celebrations, especially by motorbike. Many travellers also experience stomach problems from taking in unfiltered water, so avoid swallowing the water during the water throwing festivities. And if your phone gets soaked? Phil recommends putting your phone in a watertight container as its better to have a working phone than the hassle of a dead phone while trying to make a claim!