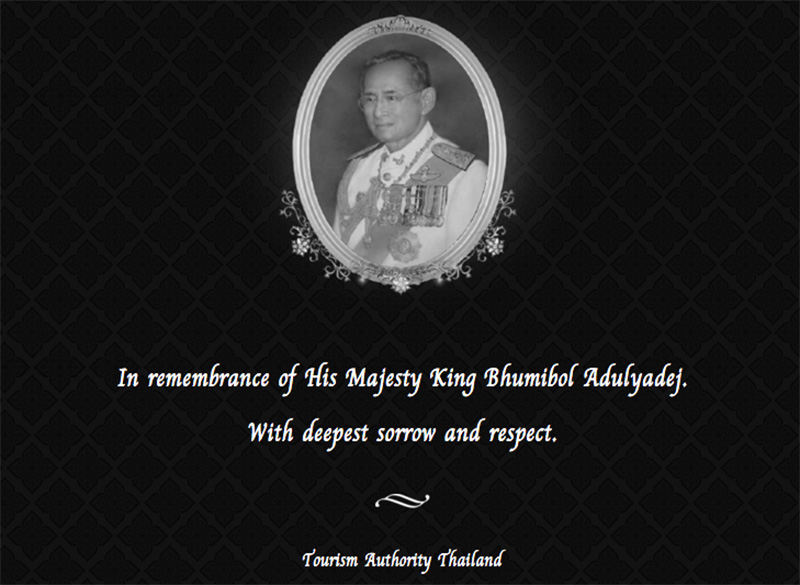 Following the passing of His Majesty King Bhumibol Adulyadej, Thailand has gone into a Mourning Period, with many events cancelled or postponed and some tourist attractions closed.

The Tourism Authority of Thailand (TAT) would like all visitors to Thailand to continue with their travel plans as normal, but be mindful and respectful at this time, and stay informed and updated through their agents, local media and announcements from the Bureau of the Royal Household and the Royal Thai Government.

Visitors should also be aware that in some areas transportation could be affected, and their understanding and patience would be appreciated.

Furthermore, many Thai people will be wearing mourning attire, and while this is not required of visitors, they are asked to wear respectful clothing when in public. Government offices have lowered the national flag at half-mast for 30 days and festive events are to be refrained for 30 days.

Tourist attractions will be open as usual with the exception of Wat Phra Kaeo (Temple of the Emerald Buddha) and the Grand Palace, as they will be the venue of the Royal Funeral Rites, and while most traditional and cultural events will be taking place as usual, the celebrations may be changed for appropriateness as a mark of respect, or the events may be dedicated to the memory of His Majesty King Bhumibol Adulyadej.

All transport, banks, hospitals and other public services will be operating as usual, but the hours of operation for entertainment and nightlife venues may be affected.

Safety and security measures have increased for all Thais and visitors, to facilitate their travelling around the country.

The following guide from TAT further explains what’s open, what’s closed, what has been cancelled or postponed during Thailand’s period of national mourning.

Status of events and cultural festivals

*Many local and international concerts and performances have also been cancelled.Status of events and cultural festivals

For further information and updates:  tatnews.org