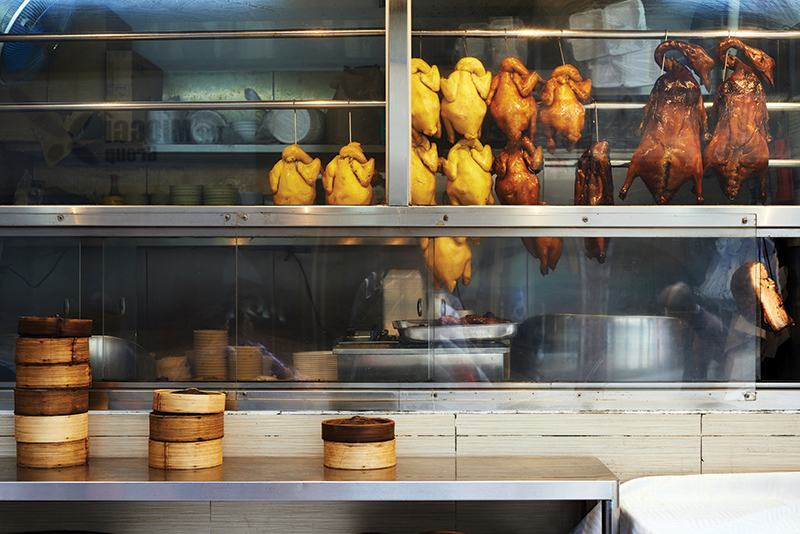 For Hong Kong locals used to long working hours, condensed living quarters occupied by generational families and tiny kitchens, eating out is a way of life. The next meal is never far from their thoughts, and it won’t be far from yours once you land in this vibrant city.

If you want to follow the Michelin stars, the newest three-star restaurant on the 2016 list is The Langham Hotel’s T’ang Court. It joins five others – 8 ½ Otto e Mezzo Bombana, Bo Innovation, L’Atelier de Joel Robuchon, Lung King Heen and Sushi Shikon, all worthy of a special occasion dinner.

For the first time, along with the two- and one-star entries, there’s also a street food section with 23 places in Hong Kong where you can try everything from fried pork fat noodles to Shanghainese pork buns. The list also includes spots for American burgers and Korean fried chicken.

Hong Kong is a hot spot for celebrity chefs with Jamie Oliver, Gordon Ramsay and others opening in the competitive food market with their trademark cuisines. Set in the two-story PMQ building on Hollywood Road, Aberdeen Social serves acclaimed English chef Jason Atherton’s modern British cuisine. It’s a bright, airy restaurant with outdoor terraces on both floors. Downstairs is a bar and bistro while upstairs is a contemporary restaurant where you’ll discover dishes such as pig’s trotter and ham hock with crispy black pudding or butter poached lobster with black truffle.

Take a wander around PMQ to delve into the history of the site which started out as the first school to provide a western education to Chinese students. In 1951 it became the Hollywood Road Police Married Quarters, the first dormitory for Chinese rank and file police officers. Now it’s a hub for design and creative industries with almost 100 small studios and shops selling everything from food and furniture to fashion, jewellery and watches. Wander down Hollywood Road past a row of antique shops to the Man Mo Temple, a tribute to the God of Literature (Man) and the God of War (M0). Dating from 1847, the temple has giant incense coils hanging from the vaulted ceiling. 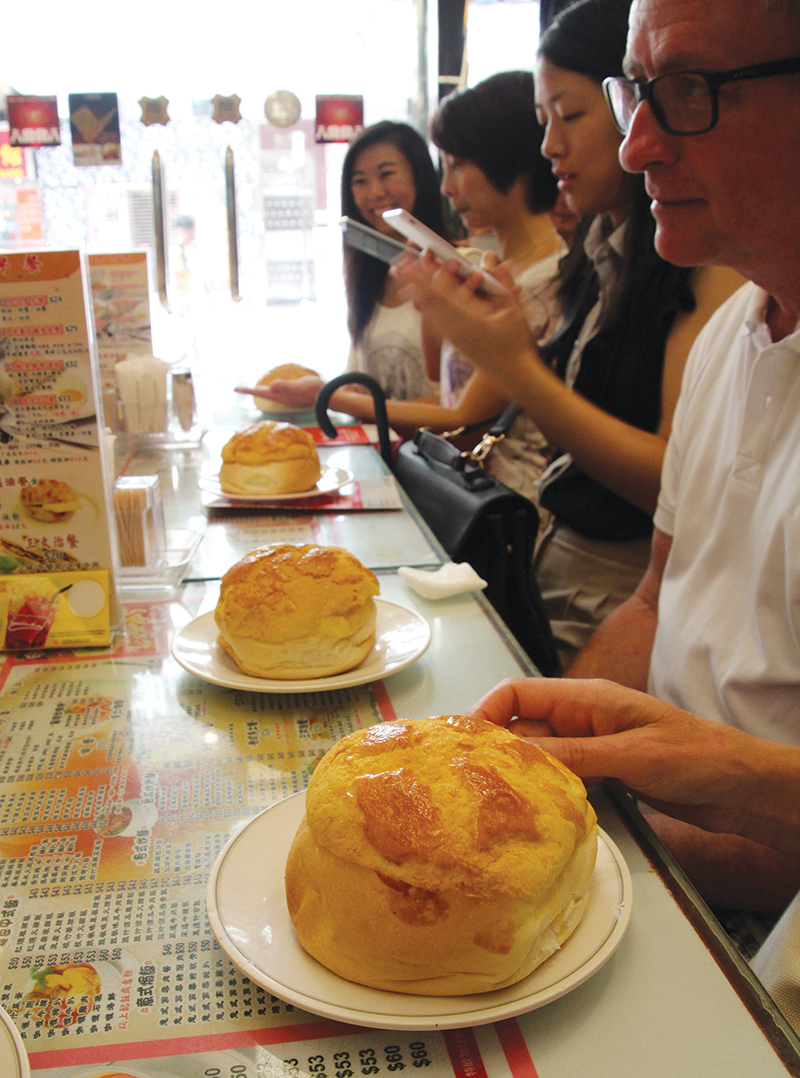 Adding an Australian flavour to the mix is Taiwanese-born chef Jowett Yu’s Ho lee fook. It is a funky Chinese kitchen which Yu says has been inspired by late-night hang outs in 1960s New York. Yu has worked at some of Sydney’s best known restaurants including Marque, Ms. G’s and Tetsuya’s and his Ho lee fook menu is as memorable as the wall of waving lucky cats that line the stairs down to the basement restaurant. Expect small and large plates filled with robust, memorable flavours such as roast wagyu short ribs with a jalapeno puree and green shallot kimchi or grilled pork belly with red cabbage salad, roasted chilli and almond salsa.

Famed as the cheapest Michelin-starred restaurant, Tim Ho Wan at Sham Shui Po (there are several branches) stays true to its origins. Hungry diners walk in past an open kitchen where the chefs are busy churning out freshly made dumplings to order, and order you will once you get a taste of the steamed pork dumplings with shrimp or the sweet, salty flavour of the oozing sauce inside the barbequed pork buns. There’s a no booking policy so timing is important to avoid a long queue but you won’t avoid the curious task of washing your own eating utensils at the table using hot water from a teapot and a large bowl.

Chef Mak Kwai Pui says he is always looking for new flavours and textures but the dish he is most proud of is the light and spongy, slightly caramelised flavour of his egg cake. A trip to Lantau Island will show you a very different side of the Hong Kong lifestyle. Take the 50-minute Ngong Ping cable car to visit the 34-metre-high Tian Tan Budda that sits resplendent on the hill top at Po Lin Monastery but do make an extra stop afterwards at Tai O. This colourful community of fisher folk lives in stilt houses built above the island’s tidal flats on a narrow channel. The locals are mostly Tanka people, descendants of the ancient Yuch tribe who were Hong Kong’s first major settlers. Relax by the water and enjoy a freshly brewed coffee.

See more of the original face of Hong Kong on a Hong Kong Foodies Tour through the bustling Kowloon neighbourhood of Sham Shui Po, known to locals as a foodie enclave. With passionate food lovers Silvana Leung and Fiona Lee in the lead, you’ll journey from breakfast until lunch through family run eateries, tasting the flavours of Hong Kong’s working-class community as you go.

Sham Shui Po has escaped much of the recent urban redevelopment. Its streets are full of food that has fed hungry locals for generations but rarely appears on the culinary scene, the stuff that visitors are unlikely to stumble across. Silvana describes it as a hidden heaven, with dishes that hold memories of a grandmother’s love and hundred-year-old traditions. 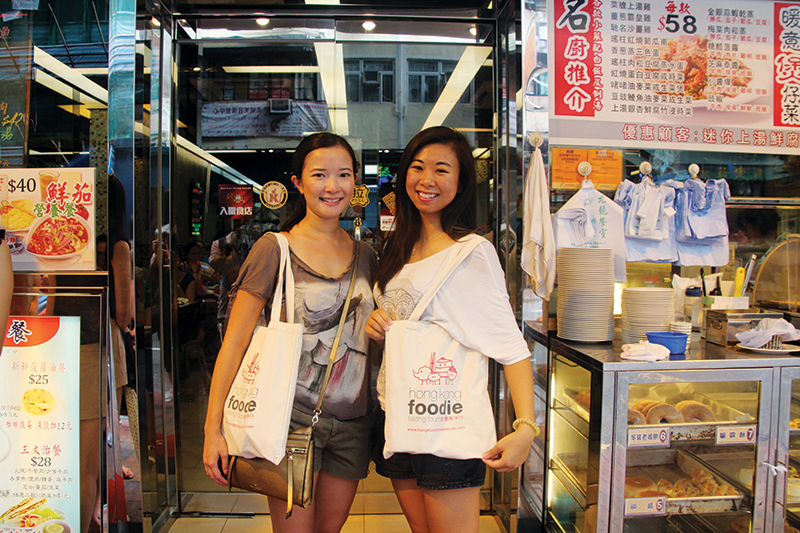 The tour takes you through busy streets to eat at restaurants where everyday foods are prepared according to family traditions. You’ll be wandering through wet markets, stopping to purchase walnut cookies and admiring rows of shiny, sharp cleavers while more are made right in front of you. It starts at a Hong Kong style café for a traditional breakfast of deliciously light bun and milky tea made with evaporated milk – bor lo bao and nai cha. Even though there’s not a skerrick of fruit in them, they are called pineapple buns because of the textured top. These are the biggest and best buns Silvana has ever seen.

Next it’s another traditional breakfast, steamed rice rolls with mix your own sauces – ju cheun fun – and the only way to eat them is with a big slurp. Throw on plenty of hoisin sauce, Silvana advises, then add some sesame seeds and a touch of chilli if you like. It certainly doesn’t look attractive, but the glutinous mess tastes heavenly.

As the group walks in single file along the crowded streets, Fiona explains the area’s history. The pawn shops are disappearing while old and new apartment buildings meld in with the best place in Hong Kong to buy all your computer and tech hardware. There’s only one shop left in the district still hand making noodles and the muscly shoulders on the noodle maker prove this is hard work. There’s a large vat of snake soup with free tastings available in the next shop.

The tour finishes with a two-course lunch in two different shops – braised goose and pork knuckle followed by egg noodles with shrimp roe. Your Hong Kong eating experience doesn’t need to end when you leave for the airport if you are travelling business or first class with Cathay Pacific. Their architect-designed airport lounges offer everything from freshly baked bread and pizzas to Asian soups and light and leafy salads.

Wherever you dine in Hong Kong, you are bound to leave with a smile and a Ho Bau (very full) stomach. •

Getting there
Hong Kong is Cathay Pacific’s hub port so flights are frequent and they have excellent business and first class lounge airport facilities including The Wing and The Pier. cathaypacific.com

Where to stay
• Stay at the Park Hotel in the heart of Kowloon’s shopping, entertainment and business district. parkhotelgroup.com/hongkong
• iClub Sheung Wan is a select-service hotel close to Hollywood Road, PMQ and Victoria Harbour. iclub-hotels.com/iclub-sheung-wan

What to do
Discover Hong Kong’s culinary culture and enjoy classic dishes and drinks at neighbourhood eateries with Hong Kong Foodie Tours. hongkongfoodietours.com