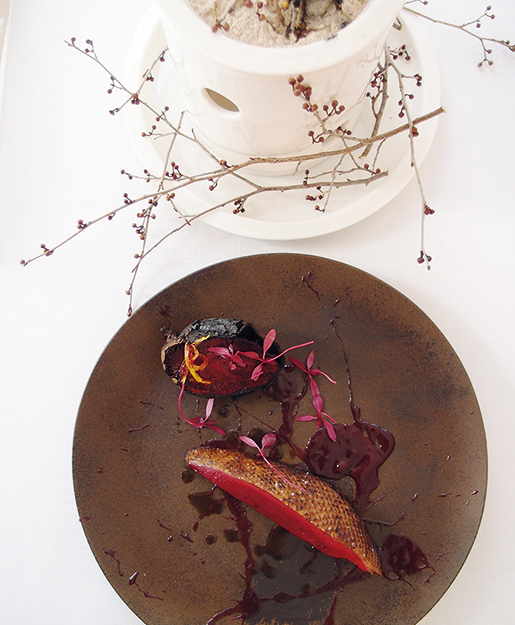 From Michelin-starred restaurants to local ‘ramen’ shops, Japan is a country where you’ll never go hungry. Tokyo alone has more restaurants than any other city in the world, as well as the most Michelin-rated restaurants. Wherever you go, you’ll be within a few paces of a good, if not great, restaurant.

While this pulsing megalopolis is home to some of the world’s best restaurants, it also features plenty of high quality inexpensive eateries. The Japanese have a deep-rooted culture of craftsmanship which permeates all aspects of their society, and this especially extends to food. Whether it’s the impeccable service, or the quality and care put in to the creation and presentation of every dish, eating in Japan’s capital city is good value for money.

At the top of the dining hierarchy is sushi – best eaten from a tiny counter restaurant in Tokyo’s posh Ginza neighbourhood, or fresh from the Tsukiji Fish Market, where many top restaurants also shop for their ingredients. Sushi restaurants at the world’s largest fish market range from cheap conveyor-style to expensive and high-end, but the quality of the sushi here is fantastic value for the price paid. The Sushi Dai restaurant is so popular that customers queue up in the morning for more than two hours. Moving to Toyosu in March 2015, now is the last chance to see the famous market in its original location.

Though sushi is generally made with seafood, some restaurants also serve sushi made with Wagyu beef. Dishes featuring the tender, melt-in-your-mouth meat are a must-try when in Tokyo. Ginza Yoshizawa has been serving sukiyaki and shabu-shabu dishes using the highest quality of Wagyu for more than 50 years. Lunch starts at a very affordable 3,000 yen (approx AUD$30); with dinner from 14,000 yen (approx AU$140). 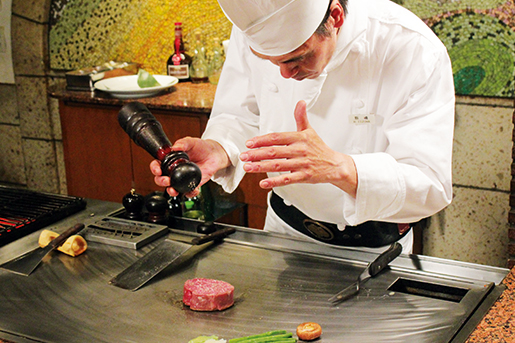 The Ore-no chain is described as ‘Michelin for the masses’ and offers fine dining by big-name chefs at a third of the price you would find in a five-star restaurant. Skilled chefs headhunted from Michelin-starred restaurants prepare signature dishes with prime ingredients such as lobster, foie gras, duck and Wagyu beef – for around 3,000 yen (AU$30) per person. Ore-no Kappo in Ginza serves kappo dishes usually only served in sophisticated Japanese restaurants, such as Fugu (blowfish). People line up to eat at their restaurants – the catch is you’ll probably have to eat standing up.

Doteno Iseya has been serving tempura from its lovely historic building in the long-faded famous red light district of Yoshiwara since 1889. Its tempura is Edo-style: crisp and fragrant from the sesame oil it’s been fried in; while the low wooden tables have been polished smooth by countless elbows. Prices range from 1,400-2,300 yen (AU$14-23).

With some people eating it every day, ramen is said to be one of Japan’s national foods. There are more than 42,000 ramen specialty restaurants in Japan, so you’re sure to find a good one pretty easily. The delicious soup, made by adding soy sauce, salt, and miso to pork bones and chicken carcasses and stewing it for a few hours, is a unique Japanese invention. Many ramen shops are open until late at night, and prices start from around 600 to 1000 yen (AU$6-10) per bowl. One of my favourites is Ramen Zundo-ya in Shinjuku, where you can try their top-seller, Ajitama Ramen, with side dishes and a local beer, for less than AU$20. Its friendly and entertaining staff are a bonus. It’s proved so popular, the chain is opening a restaurant in New York City this year [2015]. You’ll also find plenty of famous ramen shops on Tokyo Ramen Street, in the basement at Tokyo Station.

Another Japanese fast food favourite is okonomiyaki (savoury pancake), made by mixing ingredients like finely sliced squid, shrimp, pork, beef, and cabbage into a batter made from flour and cooking it on an iron grill. The name comes from the Japanese phrase okonomi de yaku, meaning “grill the ingredients you like in the way that you like”, a bit like a Japanese version of ‘bubble and squeak’. Sometaro, Tokyo’s longest-standing okonomiyaki restaurant, has been serving these delicious concoctions since 1937, and is often frequented by scholars, artists and writers.

Yakitori (skewered chicken) is also a hot favourite amongst locals and visitors. Yakitoritei offers high quality dishes using female chickens processed that morning, so you can be sure the yakitori is very fresh.

For a casual dinner with friends, young Japanese usually gather at an izakaya (‘drinking house’), the Japanese equivalent of a pub. Here food is ordered for the table a few dishes at a time and washed down with plenty of beer or sake. 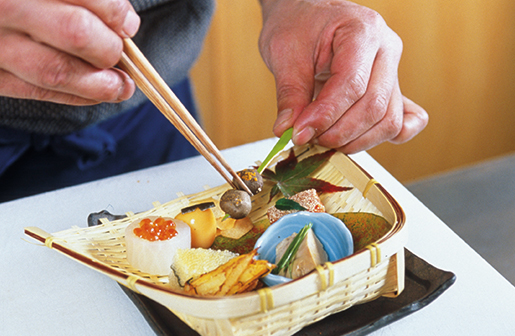 For an ‘only in Tokyo’ experience, try out one of the quirky themed restaurants. From cat café’s, where you’ll be surrounded by playful kitties; to robot restaurants, featuring mind-blowing light shows, these whacky eateries with entertainment offer a unique insight into modern Japanese culture. If you’re not that keen on dining with real cats, the Alice in Wonderland themed restaurants are sure to leave you grinning like the Cheshire Cat. There are five of these restaurants in Tokyo, with one of the most popular being the Labyrinth of Alice in the up-market Ginza district. Waitresses dresed up as white rabbits serve causal French and Italian food (Japanese-style) complete with edible mirrors, Cheshire cat faces, and notes that read “eat me”. It’s very popular with Japanese women, and with main courses ranging from 1000-1900 yen (approx. AU$10-19) you’ll get a great value meal fit for a queen.

High dining
While you’ll find plenty of places with a great tempura or a sushi breakfast, it would be a shame not to treat yourself to a degustation at one of Japan’s finest restaurants, which are regularly ranked amongst the world’s best.

Last year, Narisawa was rated #14 in the list of the World’s 50 best restaurants, as well as leading the Asia’s 50 Best Restaurants list in 2013. Chef Yoshihiro Narisawa’s genius is in blending classical French techniques with Japanese ingredients, making for a true gastronomic journey. Each dish is flawlessly executed with imagination – and a little drama – with creations such as ‘Life and Death’, and ‘Gifts from Nature’. Lunch and dinner prices [10 courses] range from 12,000 – 20,000 yen (approx AUD$120-$200) and while it may not be cheap, the experience is priceless.

Also coming in at No.33 on the list of the World’s 50 Best Restaurants, Nihonryori RyuGin has graced the prestigious roll of honour for the past five years. While the restaurant’s interior is relatively plain, Chef Yamamoto’s cuisine is anything but. Having scoured the markets each morning, Yamamoto and his team prepare a daily-changing kaiseki (refined haute cuisine) of elegantly simple dishes. RyuGin’s signature dessert is candied fruit frozen to -196° using liquid nitrogen and then filled with a hot liquid version of the same fruit. This ultra-special dining experience will set you back around 27,000 yen (AU$270) per person, but it’s a small price to pay for a once-in-lifetime pilgrimage to this epicurean high temple. With space for just 24 guests, you need to book well in advance.

At the new Mori Tower in Toranomon Hills (site of the new Andaz Tokyo) Andaz Tavern serves refined European provincial cuisine prepared with seasonal Japanese ingredients, overseen by the culinary wizardry of executive chef Gerhard Passrugger. As if the fine dining experience is not enough, the restaurant is dramatically perched on the 51st floor with floor-to-ceiling glass windows and stunning views of the city and Imperial Palace. 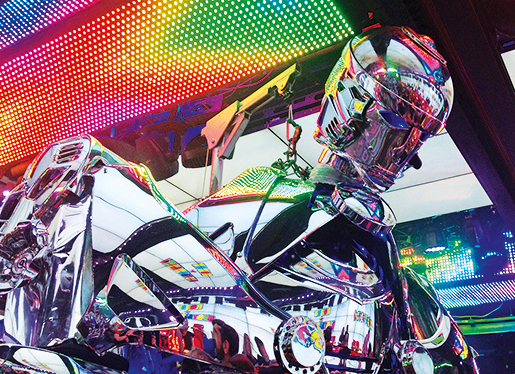 Michelin-decorated chefs also oversee three of the ten restaurants at the newly refurbished Palace Hotel, which overlooks the Imperial Gardens. Under the umbrella of the hotel’s signature Japanese restaurant Wadakura, the sushi operation here is managed by Shinji Kanesaka, who also owns the two Michelin-starred Sushi Kanesaka. The Amber Palace Chinese restaurant is operated by the same group known for Tokyo’s two-star Fureika; while Patrick Henriroux, who for the past decade has held two-star Michelin status for his La Pyramide restaurant in Vienne, France, has collaborated with the hotel on its French restaurant, Crown. The lobby level Royal Bar is as classic as a martini – a dark-wood, deep-leather alcove for serious aficionados of the finest cigars and top-shelf liquors. The bar itself is a wonderful restoration of the counter from the original Royal Bar first opened in 1961, where the hotel’s first chief bartender held court for years as ‘Mr. Martini’.

The Japanese people’s thoughtfulness towards the customer embraces the spirit of ‘omotenashi’ or ‘Japanese hospitality’, and is the basis for providing great value for money when eating in Tokyo, even when the price is at the top end. Whether you’re looking for the ultimate fine dining experience or to slurp down a quick bowl of noodles, you’ll find everything you can imagine in this eclectic city, no matter what your taste or budget. •

* All AU$ prices quoted are approximate

Getting There
Qantas flies daily from Sydney to Tokyo with connections from all Australian cities. qantas.com.au
Japan Airlines flies direct from Sydney toTokyo Narita. jal.com.au