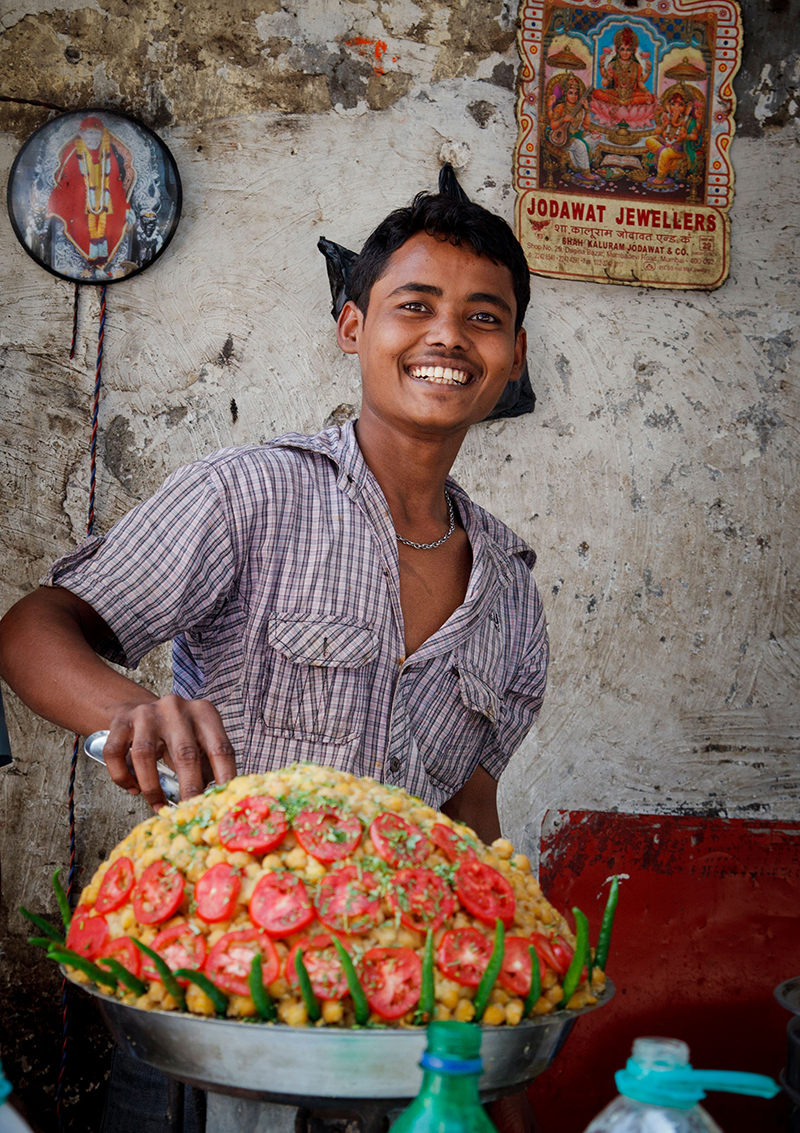 Mumbai, Bombay, Kakamuchee, Galajunkja: differing names over time, but this bustling city on the banks of the Arabian Sea captivates, inspires and engages with a colourful history told through its diverse food culture.

Built on what was once an archipelago of seven islands, Mumbai is the capital of India’s Maharashtra state, the most populous city in India – and the fourth in the world – with an estimated population of 21 million.

Apparent in the melting pot of rich traditional cuisines and impressive flavours are centuries-old customs, a fusion of dynamic modernity and there is no better introduction to an ethos than its food. The choice is endless.

Ram Singh, our tour guide, is impatient to “reveal the sights”, indicating the city also has the best outlets for retail therapy. Enthusiasm is now contagious. Bewildering reflections of a city that never sleeps give way to amazement. Mumbai, the commercial and financial capital of India, and home to one of the biggest film industries in the world – Bollywood – awaits discovery. Rich with heritage and a distinct charm, you’ll be fascinated by the different facets of this vibrant city from colonial architecture and art galleries in south Mumbai to the vibrant markets and youth-oriented lifestyles of the northern districts. 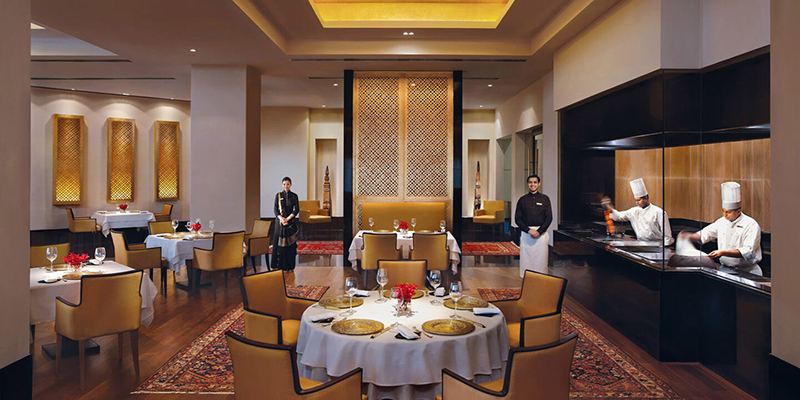 The architecture blends Gothic, Victorian, art deco, Indo-Saracenic and contemporary styles. Many buildings, structures and historical monuments remain from the colonial era. Mumbai, after Miami, has the second largest number of art deco buildings in the world. Ram is a mine of information!

Gaze in awe at the British colonial architecture of south Mumbai where the iconic Gateway of India towers over Mumbai harbour. The 26-metre-high gateway is a basalt arch monument built in 1911 during the British Raj and overlooks the Arabian Sea.

At the end of the British Raj in 1947, the last of their troops left through the intimidating gateway, which is what visitors see when approaching Mumbai by boat. The atmosphere around the monument, particularly of an evening, resembles a circus, with innumerable vendors peddling everything from Indian tea to balloons. 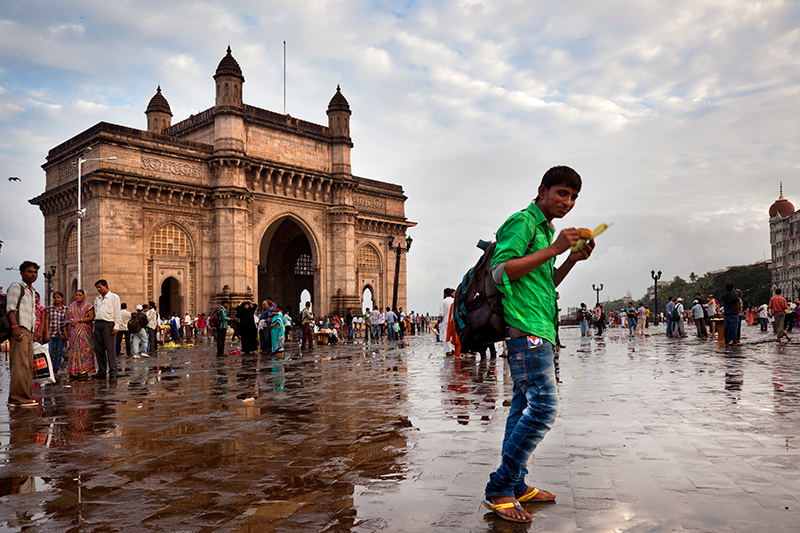 Visit the ornate High Court and see ancient sculptures and miniature paintings in the Chhatrapati Shivaji (formerly Prince of Wales) Museum in Kala Ghoda. Walk through the UNESCO World Heritage Site of Chhatrapati Shivaji Terminus, a railway station, that’s a brilliant specimen of the Victorian Gothic style of architecture in India. Once called Victoria Terminus, the station is positioned on the suburban railway tracks of Mumbai. The station was featured prominently in the Academy Award-winning film Slumdog Millionaire in 2008.

This dynamic city is overpowering from scenic Marine Drive, a three-kilometre-long boulevard in south Mumbai, which is a popular haunt for locals and tourists alike. It sits over reclaimed land facing west-south-west. Marine Drive, a C-shaped six-lane road along the coast with a natural bay that’s part of the Arabian Sea, links Nariman Point to Babulnath and Malabar Hill. Known as the ‘Queen’s Necklace’, it’s at its twinkling best in the evening.

One of the most famous suburbs of Mumbai, Juhu is well-known for its beach and as the address for wealthy business identities and some of the most famous stars of the Indian film industry. Juhu Beach is where you go to unwind, watch the sunset across the sea and give in to your adventurous streak at the ‘chowpatty’, by sampling some tasty snacks like Vada Pav from a multitude of food stalls and mobile vendors.

As Mumbai mesmerises, you’ll easily relate to Helen Keller’s sentiments: “The best and most beautiful things in the world cannot be seen or even touched. They must be felt with the heart”. 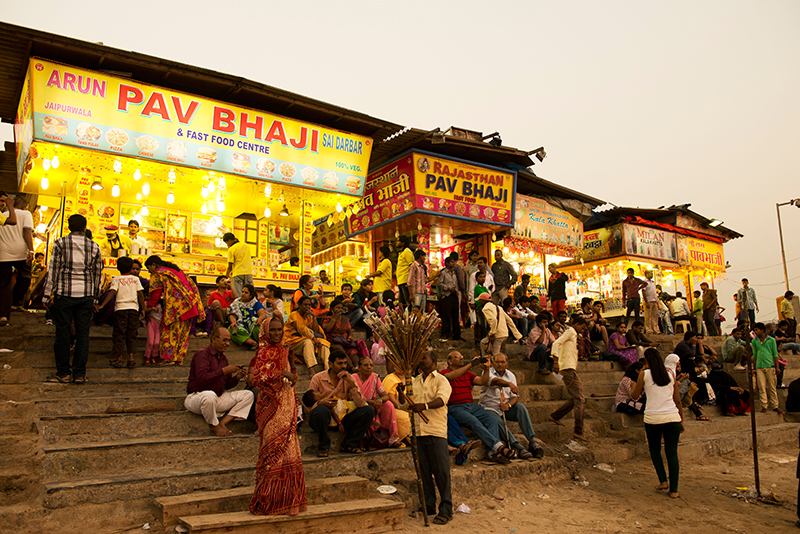 The pleasant aromas of fragrant herbs and vibrantly coloured spices are intrinsically linked to the Indian subcontinent, but Mumbai has much more to offer than its traditional cuisine. Teeming with five-star hotels, top-class chefs, award-winning restaurants, iconic establishments and hawker-style food, this culturally diverse metropolis boasts a wealth of unforgettable dining experiences.

Delectable, impressive and gastronomic flavours are rife whether you opt for vegetarian, non-vegetarian, zesty seafood or street fare. It’s a fragrant culinary journey to boast sumptuous tastes, even though the culinary landscape is amazingly varied, undergoing significant evolution.

Indian food is heavily influenced by traditions and religious and cultural choices. Tantalise your tastebuds … and realise George Bernard Shaw was right when he said “there is no sincerer love than the love of (street) food”.

Join the Mumbaikars, savour the tastes and become an explorer of food in all spheres: 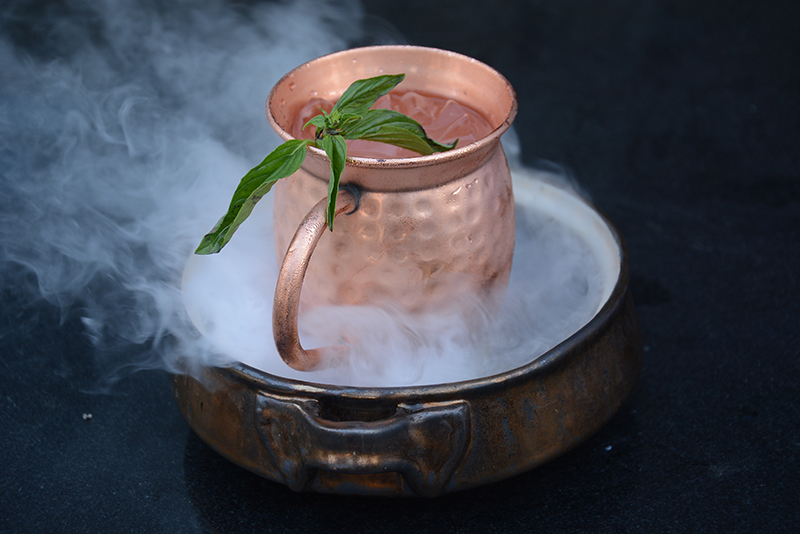 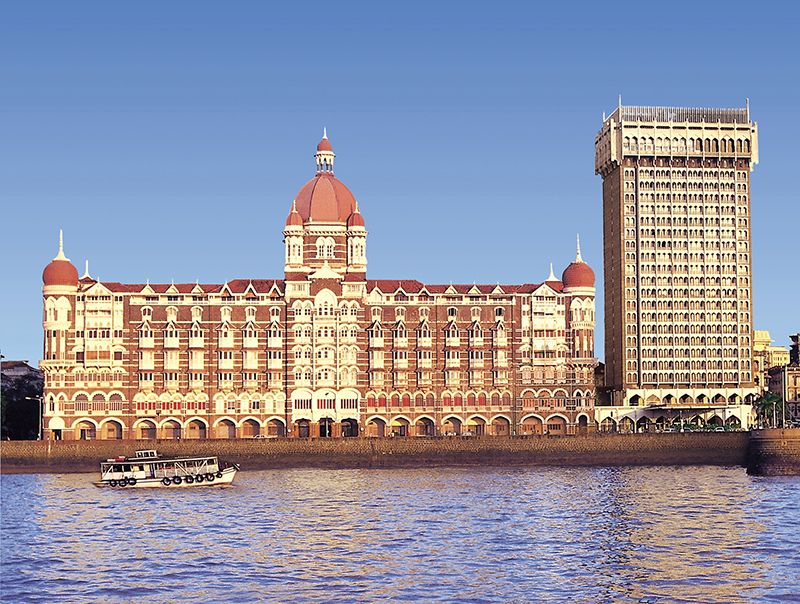 Feel pampered in the true grandeur of the iconic Taj Mahal Palace Mumbai where Masala Kraft is one restaurant that serves Indian food with a twist. Taste the robust flavours
in the signature chicken dishes like Murgh Makai and Tikki Murgh, but my favourite is Baingan Bharta (eggplant). Hearty tastes. 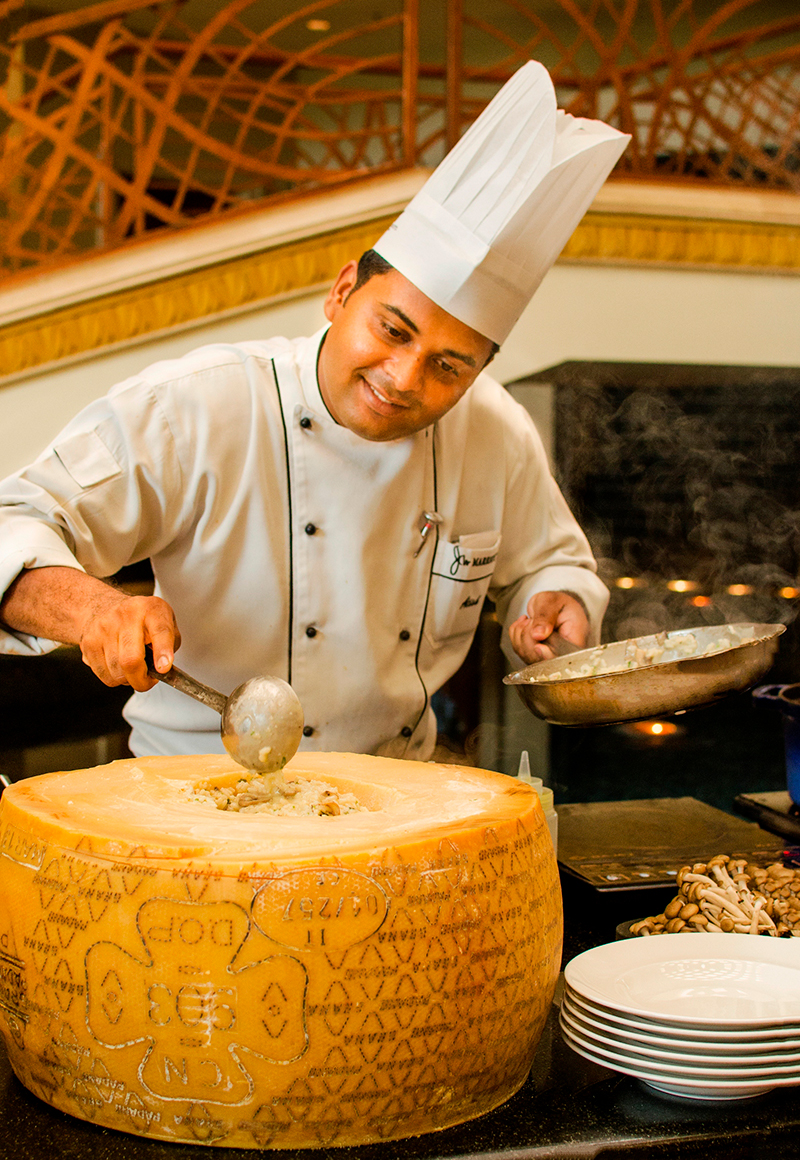 You will be spoiled for food choices with elaborate buffets or breakfast, lunch and dinner, accompanied by lilting music, at the Lotus Café in JW Marriott Mumbai Juhu.

Relish not only views to the vast expanse of the Arabian seashore from the hotel’s prime beachfront location, but savour multi-cuisine with ‘live’ stations for grills, pizzas, chef’s crafted pastas, stir-fries, crêpes and so much more. Stunning views.

Landmark restaurants
Churchgate has a couple of landmark restaurants that are worth a visit. Gaylord, born in 1956, is a multi-cuisine expert. Kamling is a 60-year-old family-style Chinese restaurant where you feel as if you’ve entered a time capsule with familiar décor and taste an authentic Hakka Chicken. Iconic memories. 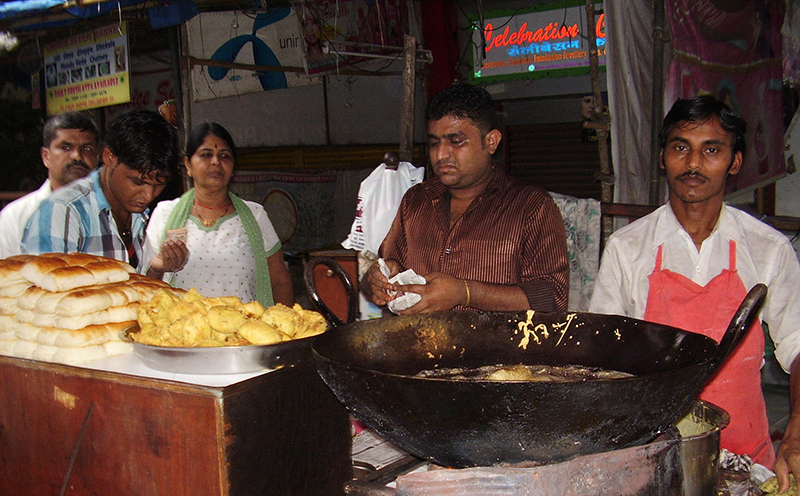 A characteristic of Mumbai is the distinctive street food sold by hawkers with such favourites as Vada Pav, Pav Bhaji, Pani Puri and Bhel Puri proving to be popular.
Rahul Patil in suburban L.I.C. Colony, Borivili Market, in Mumbai’s north-west, makes a winning Vada Pav, a deep fried potato patty with coriander and spices in a bun. A newspaper competition voted it the best in 2010. Rahul’s father, Nitin, started the fast food stall more than two decades ago and it’s still thriving. That’s commitment.

Must-try
Gulab Jamun (stuffed cottage cheese dumplings stewed in sugar syrup) is one of the Indian desserts you have to try. Simply delicious.

Masala Chai
Masala Chai (brew black tea with a mixture of aromatic Indian herbs and spices and add milk and sugar). A meal is not complete unless you’ve had Masala Chai, a spice mixture that lends the tea a sweet scent and flavour of cardamom, a spicy kick of fresh ginger, and on occasion, the aroma and taste of whole spices like peppercorns, cloves, cinnamon, fennel and sometimes star anise. Hot and spicy. 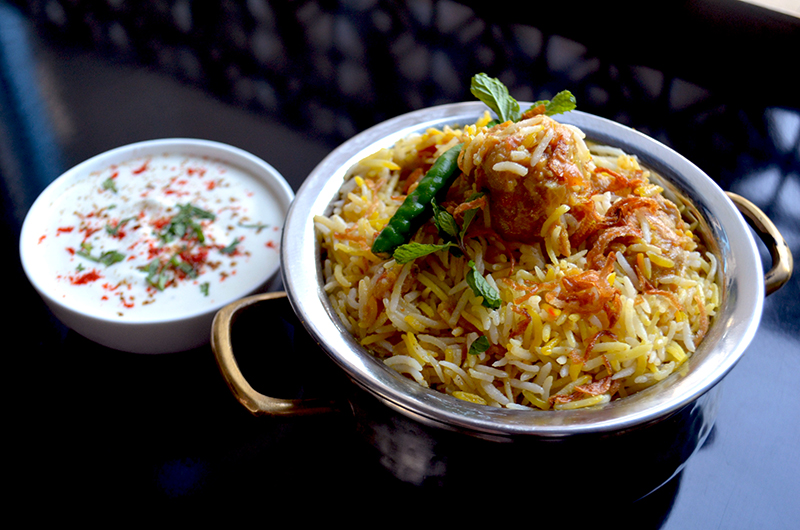 Guinness record
If you want to be adventurous then have paan, a preparation combining betel leaf with areca nut with sweet versions also available. The finest can be found at the Ghanta Wala Pan Mandir in Borivili Market. Owner Vinod Kumar Tiwari entered the Guinness Book of World Records in 2009 for possessing the largest collection of bells, one of which he rings each time he makes a paan. This Borivali paanwala dishes out 125 varieties of paan including Chocolate Pan and a Chappan Bhog that takes 56 ingredients to make!

Since “we most eat to live, and not live to eat”, why not seize a moment (or few), join the crowds and savour the tastes. Life is so endlessly delicious! •

Getting there
Fly Qantas to Singapore and from there catch a Jet Airways flight to Mumbai. India’s Jet Airways operates on all domestic routes. qantas.com; jetairways.com

Where to eat
• Discover an epicurean extravaganza at the Sofitel Mumbai BKC with all-day dining in Pondichéry Café, Tandoor fine dining at Jyran, vegetarian dining at Tuskers, Artisan, a Parisian bistro and Le Bar Diamantaire. sofitel.com
• International cuisine at the Lotus Café at the JW Marriott Mumbai Juhu is well-known for its Sunday buffet lunch. Other options include Saffron that showcases authentic Awadhi cuisine from the royal homes of Lucknow. For casual eating, go to Bombay Baking Company and Italian at Mezzo Mezzo. marriott.com.au
• Uncover the staying power of Gaylord Restaurant after six decades. Established in 1956 by the late Pishori Lal Lamba along with his brother-in-law Iqbal Ghai, Gaylord was the second offering from the partnership that had already given India the Kwality brand. gaylordrestaurantmumbai.com
• Juhu Beach stretches for six kilometres on the shores of the Arabian Sea. The chowpatty or food court at its main and side entrance is famous for its ‘Mumbai style’ street food, notably Vada Pav, Bhel Puri, Pani Puri and Sev Puri. mumbai7.com

Where to stay
• The 14-storey Sofitel Mumbai BKC is set in the heart of the Bandra Kurla Complex financial district and introduces a luxurious blend of Indian culture and French elegance. sofitel.com
• JW Marriott Mumbai Juhu is in a prime location overlooking Juhu Beach with sweeping views to the Arabian Sea. marriott.com.au

Tips
When converting currency into rupees, remember the US dollar reaps slightly better dividends than the Australian dollar.