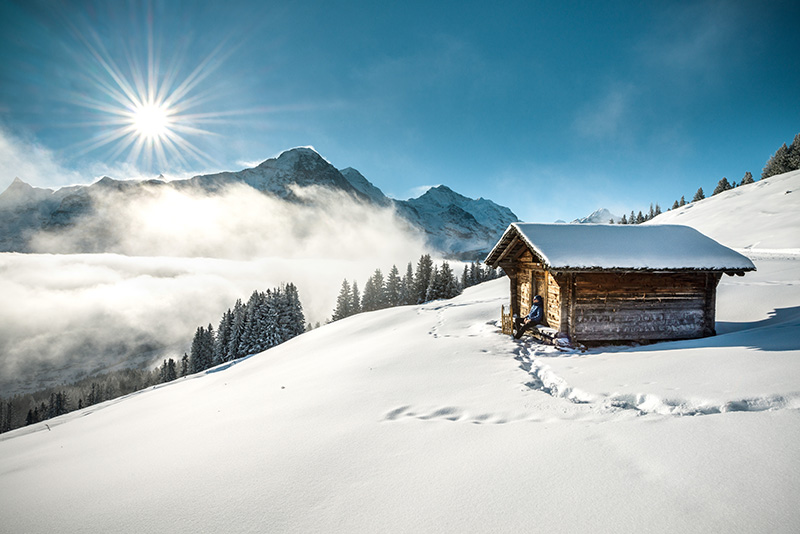 It’s as I’m bemoaning the lack of ski-in, ski-out hotels in the Jungfrau Ski Region of Switzerland – which has forced me onto a train this morning – that I take a good first look out the window. It’s frosted up with the breath from skiers around me, so I rub myself a clean patch of glass and stare.

The railway lines in this region of central Switzerland look like rollercoaster tracks. Many of the ski mountains here have no on-road access, so the only way you can get there is via rail with tracks set across mountain passes that seem to defy gravity. 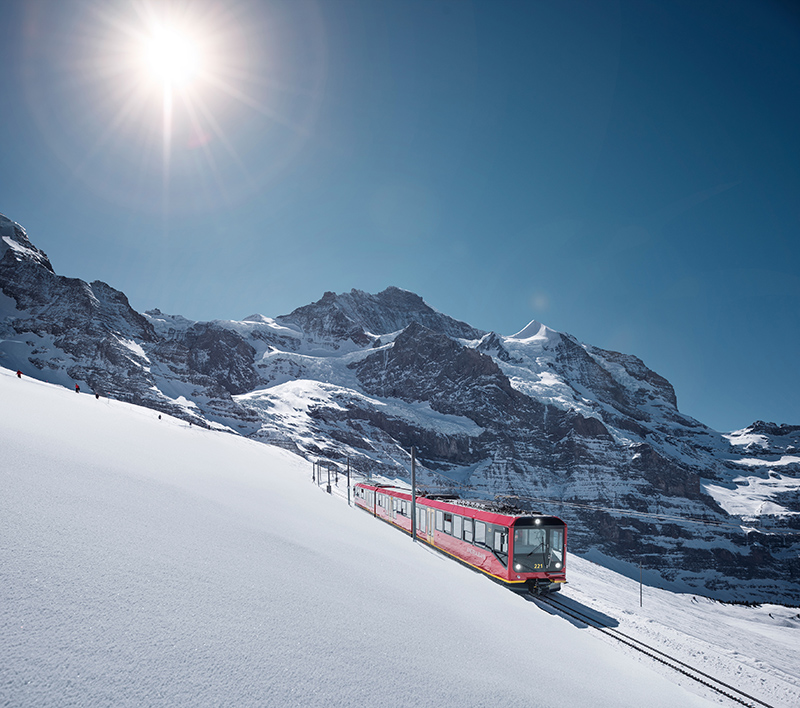 This morning I’ve left my hotel near the railway station in the Grindelwald Ski Resort and have set off for the Kleine Scheidegg Ski Resort. My train follows a winding path under the northern face of one of Europe’s most famous mountains, the Eiger. Writer Mark Twain described what I’m looking at right now: “One looks across… to the most engaging and beguiling and fascinating spectacle that exists on the Earth… it’s the most impressive mountain mass that the globe can show… it’s as if heaven’s gates had swung open and exposed the throne”.

There is no more impressive alpine location on Earth, enclosed as it is by three of Europe’s tallest and most iconic mountains – the Eiger, the Mönch and Jungfrau. Even the train ride in from Zurich is a bona fide tourist attraction. Railway tracks are laid metres from Lake Thun where homes are framed by atriums of yellow, green and white flowers. Mountains jut up at right angles to the ground; they’re jagged landmarks that plunge straight down for kilometres – the Jungfrau, for instance, is more than four kilometres high. Weaving through this landscape is a network of mountain railways, cable cars and chairlifts that give skiers access to some of the most challenging ski mountains in Europe.

In this region, skiers can ride more than 200 kilometres of slopes – with three huge ski areas connected on the one ski pass. It’s a noted area for beginners with its wide-open, gently sloping groomed runs. But its back-country offerings also attract experts, who can ski one of the world’s most famous downhill ski runs – the Lauberhorn World Cup alpine ski racecourse. 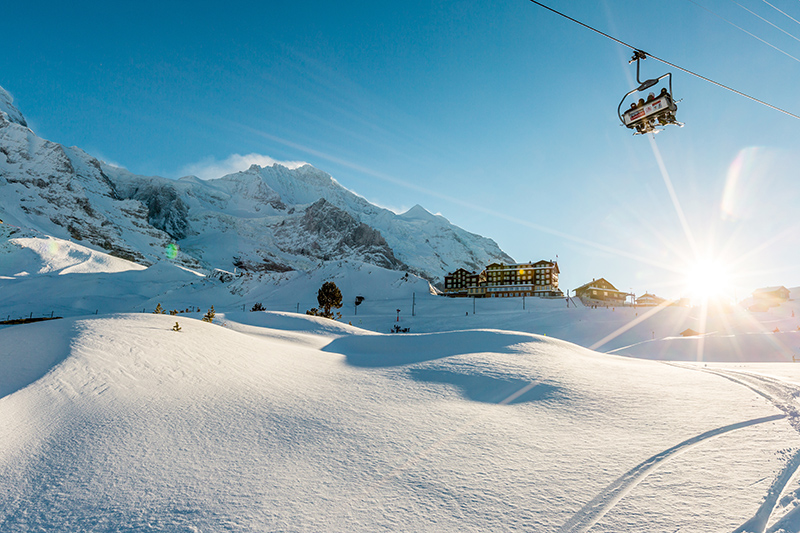 What’s more, you have the choice of basing yourself in one of Switzerland’s most sophisticated ski towns, Interlaken. It’s home to some of the country’s best regional restaurants and hotels, and its streets are
lined with luxury watch shops and high-end fashion labels. It rivals Queenstown in New Zealand as the adventure capital of the world – non-ski days can be filled with paragliding, skydiving or 50 other ways to scare yourself to death.

I opt to split my time between Interlaken and Grindelwald, a 900-year-old mountain village built in the shade of the Eiger. While this region lacks the ski-in, ski-out hotels you’ll find throughout North America, the old-world charm of staying in Grindelwald makes up for any inconvenience. 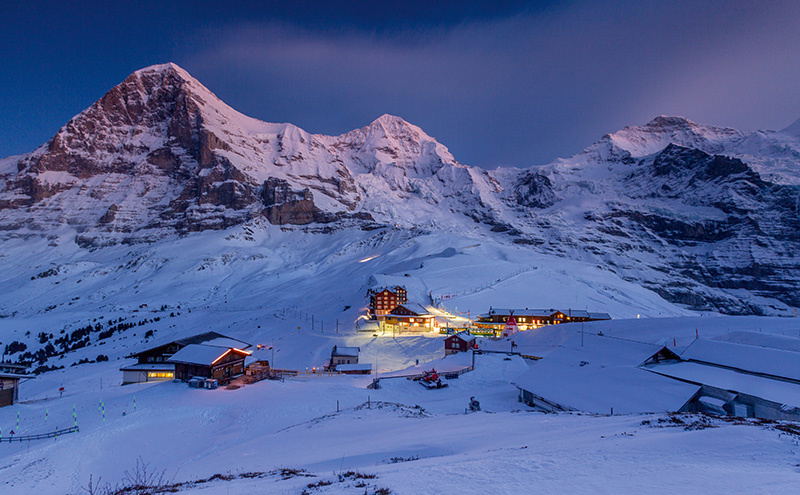 While it looks like a rustic farming village, Grindelwald actually has among the best selection of on-mountain restaurants in Switzerland, with 15 restaurants spread across its slopes. There’s also a surprising number of high-end accommodation options for such a tiny village.

My favourite is Hotel Schweizerhof, built just a few hundred metres from the village centre. It has all the charm of a long bygone era; skiers actually dress up for breakfast, and après drinks are shared around a bar so small I can barely squeeze into it. 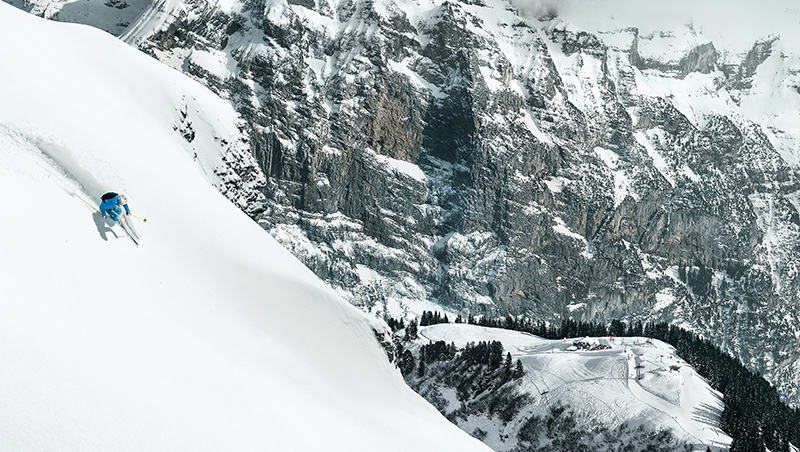 Skiing in the Jungfrau region requires that you study a map as it’s possible to ski your way between various ski towns of the region, and across entire mountain ranges. I ride the train to Kleine Scheidegg, then ski all the way back to a village just beside my hotel in Grindelwald, stopping for après drinks at rustic bars along the run (where beers are cheap and locals look as rugged as their mountains). I can also ski right into famous alpine villages, like Wengen, the finishing point for the world’s most famous – and fastest – downhill ski course, the Lauberhorn Downhill.

My favourite ski resort is Mürren. Access is via a cable car that takes me up a kilometre-high mountain face where thrill seekers come to base jump. There’s a rustic village built here on the plateau – the highest, continually inhabited village in this region of Switzerland – and, at the top of the mountain, the famous revolving restaurant used in James Bonds’ On Her Majesty’s Secret Service offers views all the way to Mont Blanc over lunch. 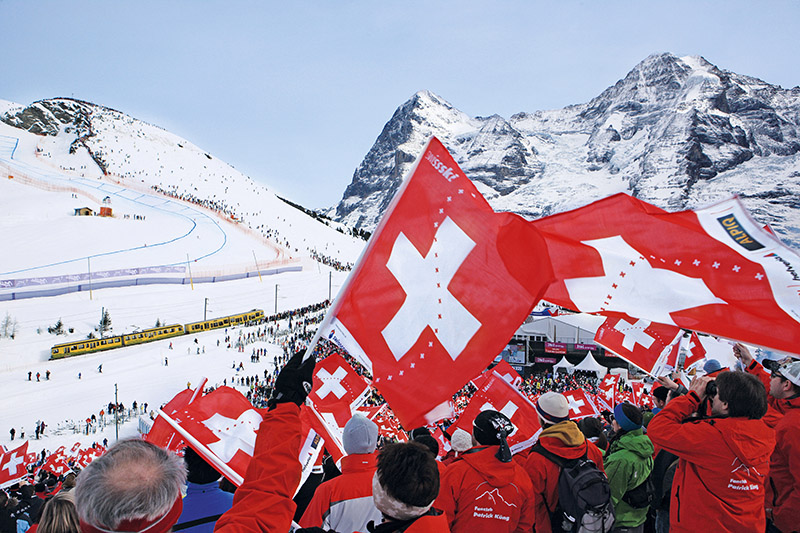 There’s enough runs across this region – 206 kilometres of pistes spread across two valleys and three mountain ranges – to ensure you need never do the same run twice. But it’s the off-piste pursuits of the region that make the Jungfrau region stand apart from the rest of Switzerland.

From my hotel in Grindelwald, I can ride a train that takes me to the highest railway station in Europe. I ride through the Jungfrau itself – inside a tunnel blasted seven kilometres through rock – to the ‘roof of Europe’. Some of my biggest thrills come when I go sledging on traditional wooden Swiss sledges on trails that pass through the woods under lights. At the end of each run, I ride a train back to the top where I sit inside an old tavern sharing cheese fondue and schnapps with strangers. There’s barely enough light to see where I’m going, but that’s part of the thrill.

Nothing feels manufactured in the Jungfrau region. There’s no purpose-built ski resorts as we know them in Australia. Life feels like it goes on about you as it always has … and that skiing is just a tiny part of that.  •

Getting there
• Swiss Air fly to Zürich daily from Australia’s East Coast. From there, take the train direct to Interlaken or Grindelwald. swiss.com/au/en; myswitzerland.com/rail 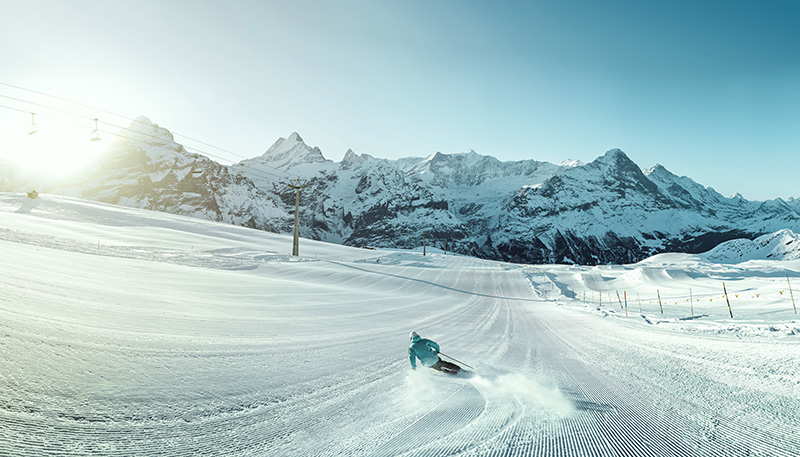