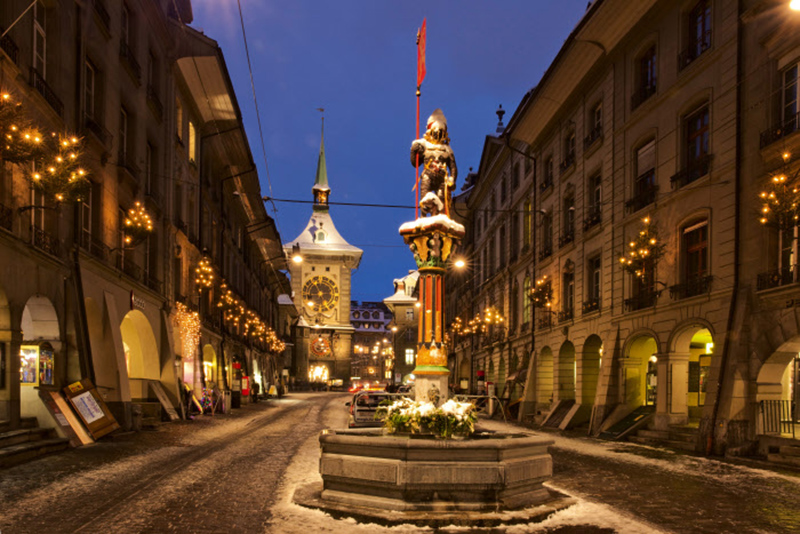 The most memorable words spoken about Swiss timekeeping came from the great Orson Welles, high in a ferris wheel over Vienna, in the film The Third Man.

“In Italy, for thirty years under the Borgias, they had warfare, terror, murder and bloodshed, but they produced Michaelangelo, Leonardo da Vinci and the renaissance. In Switzerland they had brotherly love and five hundred years of democracy and peace – and what did that produce? The cuckoo clock.” 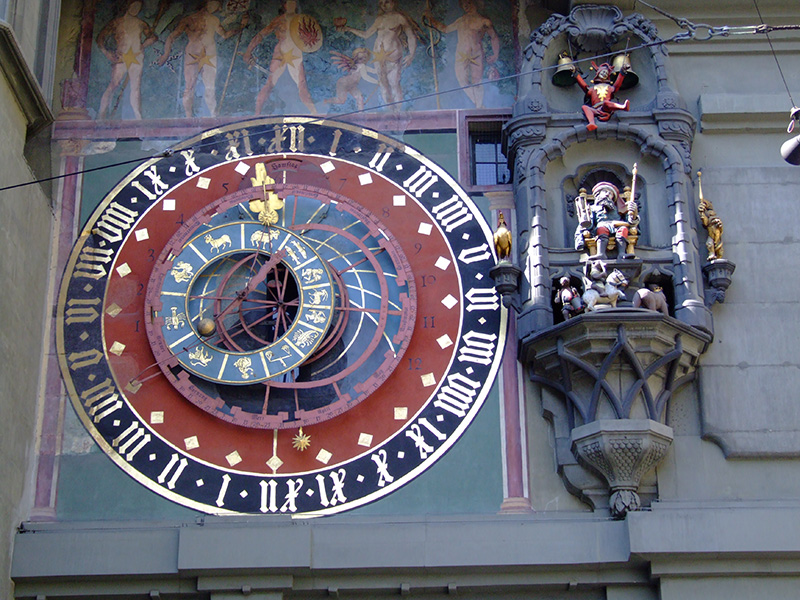 He may not have been quite so dismissive of Swiss clocks had he been given, as I was, an escorted tour through the entrails of the Zytglogge (Clock Tower) in Bern, the Swiss capital, on the site of the 1191 City Gate. It has long been said that a good magician does not reveal his tricks but all is on display here. More than 500 years old, it is the world’s oldest mechanical clock and needs to be wound daily. Crowds gather in the square beneath it to witness the cast of a gilded crowing rooster, a bell striker and ten dancing bears.

My travelling companion was reminded of the Marin Scorcese film Hugo, about an orphan boy living within a train station in 1930’s Paris who was taught to fix clocks and other gadgetry by his father and uncle and uses those skills to keep the station’s clocks running on time. 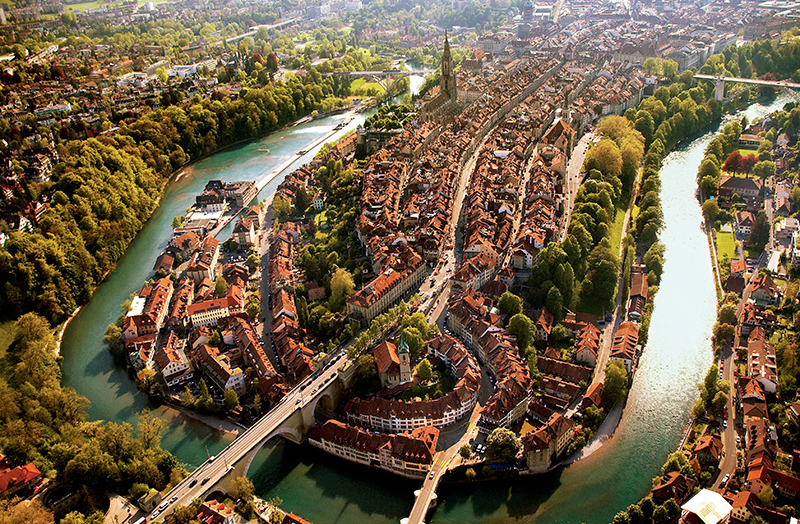 The Germanic-leaning capital of Switzerland, which once played host to Albert Einstein (with a museum honouring his presence), Bern gives the impression of having been designed by an ancient predecessor of a Tourist Office. Compact and clean, with pure air, striking architecture, covered outdoor arcades, traditional shopping precincts and markets, and a swiftly flowing river which winds through the city, with bridges and high views. In the cool evenings, the city square is filled with spacious open street restaurants and buskers (one of which is a puppeteer’s doll, seemingly skilled on the violin). 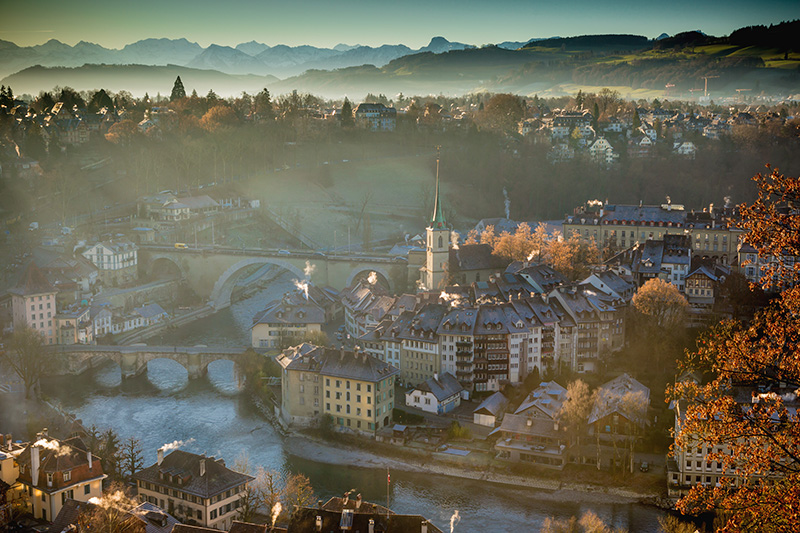 There is a chocolate box lid quality to the place and, not surprisingly, chocolate emporiums aplently. Our favourite was Laderach, which offers a particularly delectable dark blend with strawberries and pink peppercorns. There are cake bears at the other sweet shops – a local delicacy. Add that to the Bern motif, an enclosure of brown bears residing in a cage down by the river, and a large moulded beast straddling a wire across a nearby bridge by the UNESCO World Heritage Old Town, and you readily reach the conclusion that Bern is bear crazy. In March, Bern’s version of ‘Carnival’ takes place when a mythical bear imprisoned in the Prison Tower is woken from his winter sleep by the ychüblete (drumming) and released. Masked revelers brave the winter temperatures and swarm through the streets and restaurants (including the 350 year old Klotzlikeler) of the Old Town. ‘Guggenmusik-Cliques’ (bands of carnival musicians) make the 6 kilometre route along Bern’s arcaded promenade vibrate with their wild rhythms and noisy percussive music. 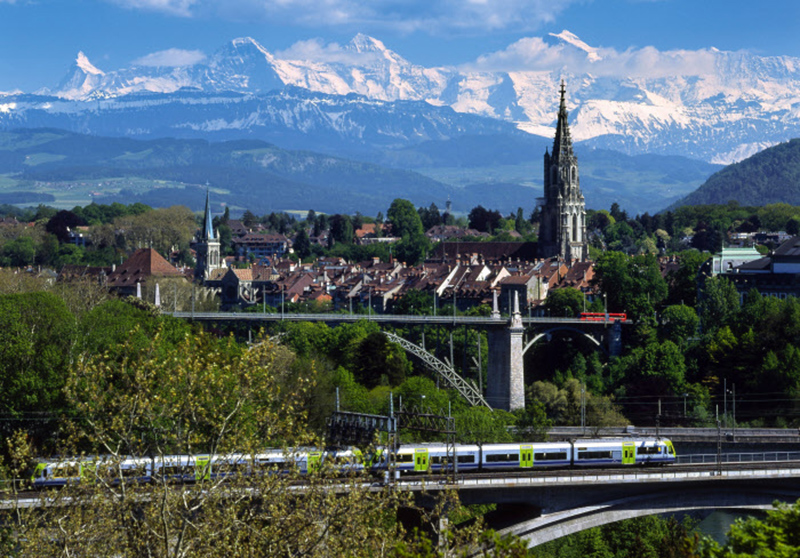 Though there is a Schnit International Short Film Festival with Bern as one of eight participating cities, a Bern ‘Grand Prix’ where thousands run along “the ten most beautiful miles in the world”, a Buskers Festival, a world-famous jazz jazz club (Marian’s Jazzroom), Christmas Markets on Bear’s Square and at Kambly, and a September Sichhlete Festival which combines a harvest, livestock and folk festivals, and the four-day Gurten Music Festival – reached only on a funicular called the Gurtenbahn – showcasing some 60 live acts of all contemporary genres – it needs be said that there is little of the French joie de vivre that one finds in, say, Geneva. Though the citizenry is faultlessly helpful – particularly when it comes to negotiating the network of trams and buses which can take you beyond the immediate city limits – the smiles and banter one encounters are more like to be from other visitors.  There is a certain general abandon though down by the river under Parliament House. The normal gleeful splashing in a pool is to be heard but the real attraction is the use of the Aare River as a means of rapid transport cum recreation. 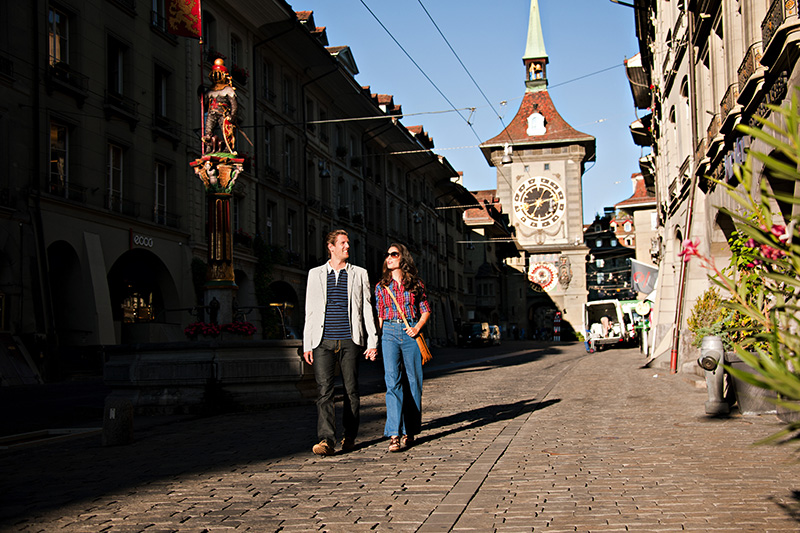 The crisp and deep waters that sweep down from the Bernese Alps can take you a few hundreds metres or from one side of the city and out the other. There is no need for a canoe or kayak, just hurl yourself (perhaps with your possessions in a watertight pouch) into the torrent from one of the platforms and, when you wish to alight, strike out toward the shore, grab one of the steel bars protruding from a platform and drag yourself onto land. First attempt can be a little, let’s say, challenging and even a tad terrifying, but once you get the hang of it, it’s an almost addictive experience. On a busy day there are quite literally hundreds of bobbing heads being swept past your eyeline. All looking rather joyful. •

The writer travelled to Switzerland from Britain by train and returned out of Geneva by British Airways. railplus.com.au, britishairways.com

Where to stay
Hotel Bern: hotel-bern.ch