For a vacation to please those who golf and have partners who don’t, Sabah is the perfect choice. 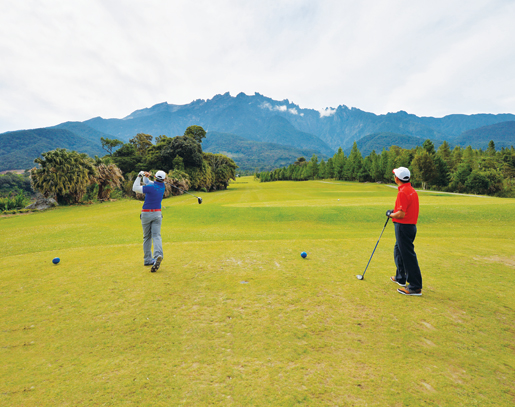 The Sabah Masters isn’t spoken in the same breath as The British Open or the US Masters but it is, none the less, a prestigious event that is played by Asia’s up and coming golfers all wanting to shine on the world stage.

For the past few years the final tournament of the Association of Southeast Asian Nations (ASEAN) tour has been held in Kota Kinabalu, the capital of Malaysia’s Sabah province on the island of Borneo. This year the four-day tournament offered prize money totalling US$100,000 and duly attracted the best of the young golfing talent in the region.

When not watching the professionals or working on your handicap at one of the province’s 18 golf courses there are plenty of other things to do, including island hopping, mountain trekking and visiting World War II memorials. At the top of my list is a visit to an orangutan rehabilitation centre. 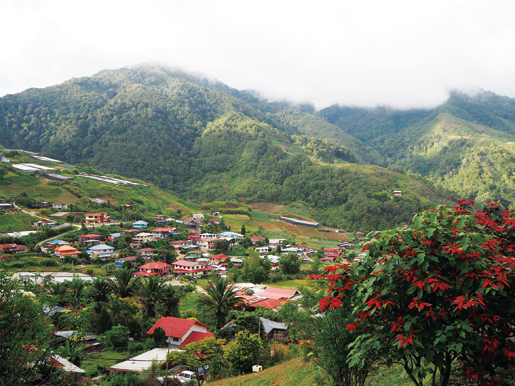 City limits
First impressions of Kota Kinabalu (population 600,000) are unexpected. In WWII Allied forces levelled the city to liberate North Borneo from Japanese occupation, leaving it with little in the way of architectural history apart from the Sabah Tourism Office and the 15.7 metre Atkinson Clock Tower, built in 1905, and still standing proudly today. Also unexpected is the laid-back nature of the city. Unlike many frantic, frenetic Asian cities it feels positively laconic – even the traffic.

In town, our guide takes us to his local café for a cup of ‘kopi ‘o’ (strong black coffee and sugar). The coffee is good but I’d come back just for the name of the establishment: The Fook Yuen.

After our caffeine blast we hit the markets, along with half the town. Like most Asian markets this is the bustling epicentre of the city – relaxed, colourful, fruit filled, smoky (due to all the chicken wings cooking) and full of smiling faces and teeth, well, some teeth. The seafood section alone is the loudest and maddest I’ve ever encountered.

The markets are on the harbour front, which is also the hub of Kota Kinabalu’s restaurants, bars and live music venues. It’s definitely a great place to hang out in the early afternoons and late into the evenings. 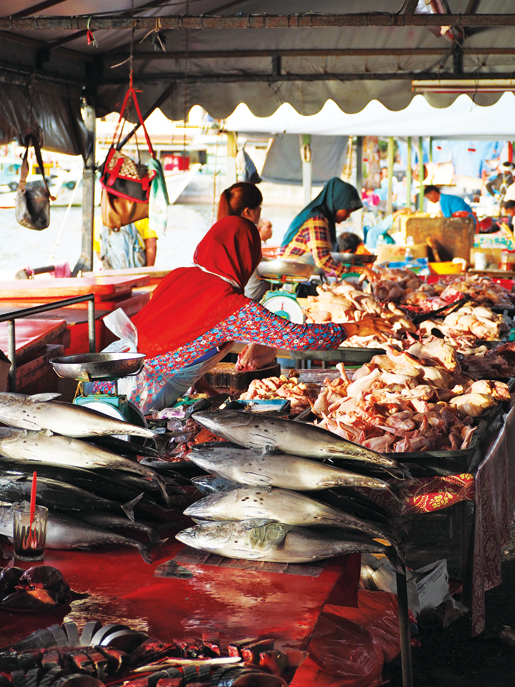 Par for the course
One of the main reasons for me being here is the golf and the state of Sabah has eight premium golf courses and 10 smaller courses accommodating all levels of enthusiasts. We’re here to see the Sabah Masters Championship 2014/15 final, which is being played on the Graham Marsh-designed 27-hole championship golf course at the Sutera Harbour Golf and Country Club (part of and opposite The Pacific Sutera Hotel where we are staying).

The hotel is set on 156 hectares overlooking the South China Sea, golf course and marina. The Sabah Masters Championship is a stepping-stone for Asia’s brightest golfing stars, such as Mardan Mamat from Singapore who we watched take out the championship on an exhilarating final day. All four players in Mamat’s group were in contention to win at the beginning of the final round.

The day before the master’s event I played in the pro-am on the same course and was fortunate to be paired with Malaysia’s 25th best professional player, Nicholas Pua. I can only hope my incredibly bad round (which included not hitting any straight drives off the tee and slowing down play while trying to retrieve lost balls, six of which are still out there) didn’t effect Pua’s chances of winning. I can’t blame the golf course for my disastrous round as the course is in superb condition. I did hit a few classic golf shots and ended up with a respectable score of 68 (for the first nine holes and I’m pleading the 5th amendment on the 18-hole score).

The Sutera Harbour Golf and Country Club is a golfing paradise and along with its championship course the club has a two-tiered driving range, practice putting and chipping areas and is the only course in East Malaysia with a 20-hole night golf facility. 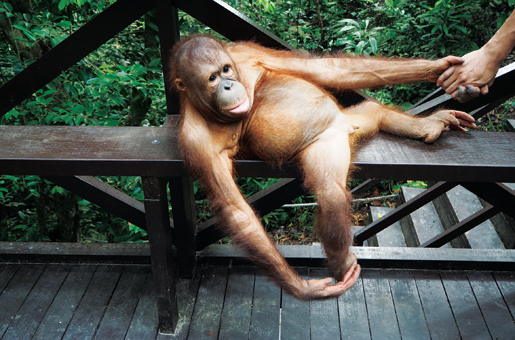 Fun, games and orangutans
Next day we are taken on an island tour to Pulau Sapi Island in Sabah, which is one of the five islands that make up the Tunku Abdul Rahman Marine Park – just a 15-minute boat ride from the city of Kota Kinabalu. It’s picturesque with a white sandy beach and aquamarine coloured water. The weather is perfect and after a few swims and a delicious buffet lunch we’re back in town.

Our next port of call is Shangri-La’s beautiful Rasa Ria Resort & Spa, set on 162 hectares, right next to one of Sabah’s best beaches and just a 40-minute drive from the city. It includes a world-class golf course, part of the Dalit Bay Golf & Country Club. The rooms are opulent, the restaurant’s food exquisite, there are two pools, a spa and as a bonus, the massive private Pantai Dalit beach will exhaust all your water sport fantasies.

The Rasa Ria also has a nature reserve with both a petting zoo and, more importantly, a facility where young, abandoned orangutans are rehabilitated so they can eventually be put back out in the wild.

At Rasa Ria we play a round of golf and you’d be hard pressed to find a prettier championship golf course or location. Water hazards are quite prominent and Mount Kinabalu can be seen in the distance when clouds allow. Large monitor lizards appear occasionally to check out our golfing prowess and can’t get away quick enough as their lives are in danger from my wayward golf swing.

After golf we visit the orangutan facility which is currently looking after two young orangutans (four have just been moved to another facility to continue their rehabilitation) and we are lucky enough to have a private viewing with these beautiful, unique and very funny animals.

Feeding times are 10am and 2pm, which is when the public is allowed in to watch them. And watch them we do – absolutely mesmerised as two five-year-old-males wrestle, roll, run, jump, swing and, believe it or not, blow raspberries. Definitely one of my most memorable and favourite animal experiences ever. 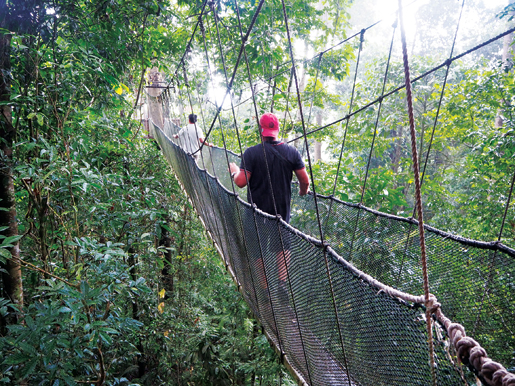 Into the clouds
Our final golfing day is at the Mount Kinabalu Golf club, 1500 metres above sea level and a hilly two-hour drive from Kota Kinabalu. The course is as scenic as any golf course I’ve seen and sits in the shadow of Mount Kinabalu, Malaysia’s second highest peak at 4095 metres.

We only play nine holes as the course is having restoration work done. Being in the mountains, hazards on the course include drifting clouds, which momentarily make visibility poor. On the first four holes you hit downhill, which means I make a few unintentional long shots in the right direction – down. But what goes down must come up and the remaining five holes are uphill and for me the par fives are five shots too long. My playing group loves it and thrives on the challenge.

Golf isn’t the only attraction at Mount Kinabalu; you can also hike the mountain, a two-day endeavour so popular you have to book months in advance. Other mountain options available include a jungle rainforest canopy walk, which is not for everyone and requires both a degree of fitness and a lack of vertigo.

After the canopy walk we head back to town and on the way stop at the Kundasang War Memorial to pay our respects to the Australian and British prisoners of war (POW) who died in Sandakan and during the infamous death marches to Ranau during World War II. The memorial also remembers the people of North Borneo who risked their lives to help the POW.

I didn’t know much about Sabah before arriving but after just seven days I’ve fallen in love with this island, the warmth of its people, its golf courses, its beautiful wilderness and, more than anything else, those raspberry-blowing orangutans. •


TRAVEL FACTS
Getting There

Sutera Harbour Resort is only a 10-minute drive from the airport and has spectacular views of the South China Sea, the resort’s 27-hole championship golf course and the 104-berth marina. With a multitude of dining options, recreational activities and renowned Mandara Spa this is a fantastic resort. suteraharbour.com

The Rasa Ria Shangri-la Resort is 40 minutes drive from Kota Kinabalu and a 1000 miles from care. Set on 162 tropical hectares the resort backs onto one of Sabah’s best beaches, Pantai Dalit. With a championship golf course, spa, exquisite food options, lavish accommodation, a petting zoo and orangutan rehabilitation centre, this is definitely one of the best resorts I’ve stayed in. shangri-la.com