I smell it before I see it: a carpet of fish carefully laid out to dry, glinting silver in the early morning sunshine. Crowds of fishermen, sarongs tied high, are untangling their fishing nets on the beach as workers haul massive baskets piled high with yellowfin tuna along the beach. Blood and guts fly through the air as fish are gutted and stacked, a murder of crows waiting to swoop on the offcuts.

Net worth
It’s only a little past 7 am, but Lellama, Negombo’s Fish Market, is in full swing. Little stalls are set up selling their day’s catch. There are piles of fresh yellowfin, squid, crabs and unidentifiable sea creatures along with bags of fragrant spices and piles of dried fish. It’s smelly, it’s kind of dirty and, it’s exactly where I want to be, among the locals, exploring the food culture of Sri Lanka in the most authentic way I can.

Sri Lankan cuisine is shaped by the local traditions of the country’s ethnic groups and foreign traders along with influences from India, Indonesia, Portugal, the Netherlands and England, all spliced together and reinvented,

Spice island
Given its island setting, seafood plays a huge part in the local cuisine. But the fertile island is also blessed with an arsenal of incredible vegetables, fruit and heady spices. Curries, dahls and rice are staples and are generally accompanied by roti-style bread. Spices are used liberally and my guide, Beyond Travel’s Dilan Bandara, warns me early to order Westernised versions of the food. I ignore him and spend the next week ordering meals like a local: with maximum heat.

The food, fuelled by chilli, curry leaves, cinnamon and black pepper, is intensely hot. But when I reach for a fiery katta sambol of pounded chilli, Maldivian dried fish and lime juice to spice things up further, Dilan is suitably impressed.

Relics, ruins, and roti
While I’ve come for the cuisine, this ancient island Kingdom also packs a hefty cultural punch, with eight UNESCO World Heritage sites and a multitude of mosques and temple complexes dotted across the country. Beyond Travel promise to immerse me in the country’s ancient traditions and religions while exploring some of its most iconic relics and ruins.

After the fishy foray at Negombo, Dilan begins my cultural edification at the 1600-year-old Sigiriya Citadel Rock, a 200-metre-high column of rock that was once topped with a large citadel and elaborate city inspired by the Buddhist Alakamanda, the city of the gods built among clouds. Climbing past frescoes of bare-breasted nymphs and passing through gigantic lion-pawed gates, we climb the 1200 steps to the palace ruins at its summit. The view is extraordinary. As is the local breakfast, which I discover the following morning.

While no two are ever the same, breakfast Sri Lankan-style may possibly be one of the greatest meals you will ever eat. There are always multiple curries, soft and fluffy milk rice, dahls, a selection of sambals and chutneys, crispy roti as well as the undisputed stars of this morning show, hoppers. Appam are a crispy bowl-shaped variety.

Full steam ahead
The ubiquitous pancakes are made from fermented rice flour and coconut milk – sometimes topped with a fried egg and a dollop of spicy sambal – while lacy idiyappam (string hoppers) are a steamed noodle pancake made from a hot-water dough of red or white rice meal. Both make it onto my plate every morning.

Fuelled by a fiery breakfast, I explore ancient Polonnaruwa with all the zest and vigour of Lara Croft herself. Well, at least a Lara Croft who’d just devoured several bowls of curry. The former royal capital is home to the four, enormous rock-cut Buddha statues of Gal Vihara and the ancient relic shrine of Hatadage. I find a certain serenity in The Sacred Quadrangle, a significant collection of monuments, stupas and shrines, the highlight of which is the circular Vatadage and its four large Buddha statues. I also swat up on Sri Lankan history in the ruins of a 10th-century Royal Palace.

Authentic eatery
Our daily dose of culture ticked off, Dilan drives down a dusty track with a wide grin on his face. I smell the source of his excitement before I see it. Priyamali Gedara is an authentic rural farmhouse eatery and on entering its rustic mud brick kitchens, the heady, spice-infused air is deliciously overwhelming.

The food at this family-owned restaurant is painstakingly authentic, everything lovingly cooked over coal by a group of local home cooks from family recipes. Fresh coconut is ground, spice pastes are pounded by hand, while more than a dozen curries bubble away like pots of molten gold. The ladies are happy to show off their technique as they flip coconut rotis and fry river fish and chicken over coals.

Feast of the senses
Having seen first-hand the love and pride that has gone into the making of the food, I taste my way through every last dish, stacking a lotus leaf plate high. From flavour-packed bowls of soft potato, eggplant and pumpkin, sticky okra and crunchy lotus root to fragrant curried meats, crispy-fried chicken, and fish cutlets (addictive dried fish, potato and spices fried in bite-sized balls), every mouthful is memorable. I head back for seconds and thirds, leaving only just enough room to taste my way through the dessert buffet.

I also save room for the traditional buffalo milk curd and honey, sweet fried kevum (oil cakes) and coconut kokis (a battered sweet), washed down with sweet black tea to a backdrop of baying wild peacocks and rice fields. Clearly inspired by my post-lunch girth, Dilan rolls me out of the farmhouse as he has another surprise in store. At Minneriya National Park, we head out in a safari vehicle, observing monkeys, spotted deer and flocks of rare birds until we happen upon the bewitching sight of six adolescent male elephants, my post-lunch doppelgangers, enjoying their daily bath.

Eye on the prize
An eye emerges from the water just metres from our vehicle. It is soon followed by the prehistoric body of a crocodile who is clearly pondering my potential as afternoon tea. The elephants also stop to size us up but, deciding we’re no threat, get back to the business of frolicking in the water.

Without another safari vehicle in sight, it’s an intimate experience and I get a serious case of the warm and fuzzies at the sight of these magnificent beasts doing what elephants are meant to do, free from restraints and human interaction. By the end of our safari, we’ve spotted close to 100 of the perky pachyderms, always at an unintrusive distance, including a newborn who almost kills me with cuteness.

Offerings and prayers
Our days continue in a haze of cultural enlightenment and eating. In Kandy, we witness the pooja (offerings and prayers) at the Temple of the Sacred Tooth Relic and explore Dambulla Cave Temple complex, its ceilings alive with the colourfully painted stories of Buddhist legend.

Between ruins and relics, we stop for eye-watering curries made fresh at “short eats”, moreish Sri Lankan snacks including golden samosas, crumbed and fried pan rolls filled with spicy beef and godamba roti stuffed with fish and vegetables.

Between each stop Dilan and I indulge in calorie-packed conversation, deconstructing the finer points of our every meal as we enthusiastically plan our next. We drive through tea country into the highlands to Nuwara Eliya. With its red telephone boxes, colonial buildings and rose gardens, there’s such a British colonial vibe, the city is generally referred to as ‘Little England’.

Grand designs
The Grand Hotel Nuwara Eliya, a sumptuous hotel that is a remnant of British colonial rule, offers a complete change of culinary pace. Surrounded by teakwood, crystal and fine china, elegantly attired waiters deliver us towers of pretty sandwiches, jam and cream-laden scones and dainty cakes, which I wash down with perfectly brewed tea from a delicate bone china cup.

On the drive back to Colombo, Dilan cannot resist making a special pit stop for his ever-hungry charge, pulling in to a roadside stall for a hefty slab of kalu dodol – a sweet, sticky, gelatinous Sri Lankan sweet made of jaggery (cane sugar), rice flour and coconut milk. 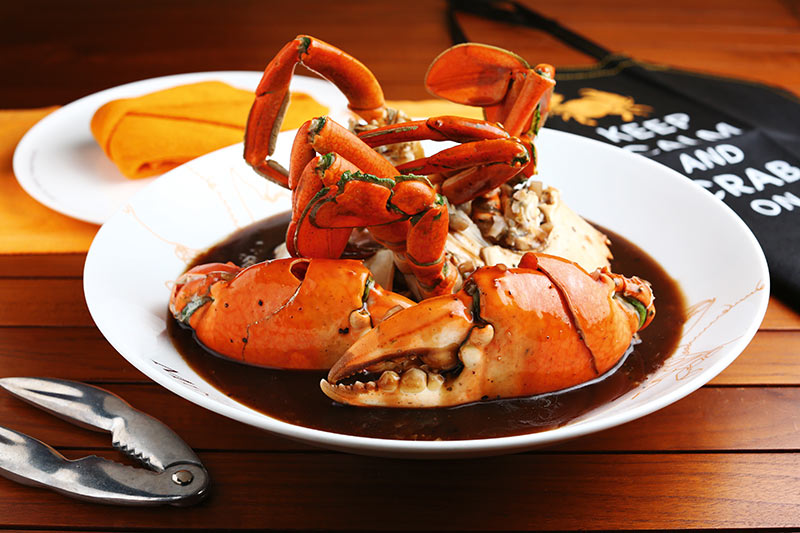 But it is my last supper at Colombo’s Ministry of Crab, renowned as one of the best restaurants in Asia, that proves to be one of the most memorable. I salivate over a menu of sweet, succulent crabs and king prawns, caught locally in freshwater rivers and lagoons and whipped up in the open kitchen. I polish off a kilogram of aromatic garlic chilli crab, slurping, sucking, and moaning happily. Scraping up the last drops of luscious sauce with soft, wood-fired kade bread a fabulous finale to my week of extreme eating on this spiciest of islands.

Explore
Travelbay Tours has a range of tours from 7-14 days including the 14-day ‘Wonders of Sri Lanka’ private tour. travelbay.com
Beyond Travel offer a range of expert, private guided tours of Sri Lanka. beyondtravel.com.au