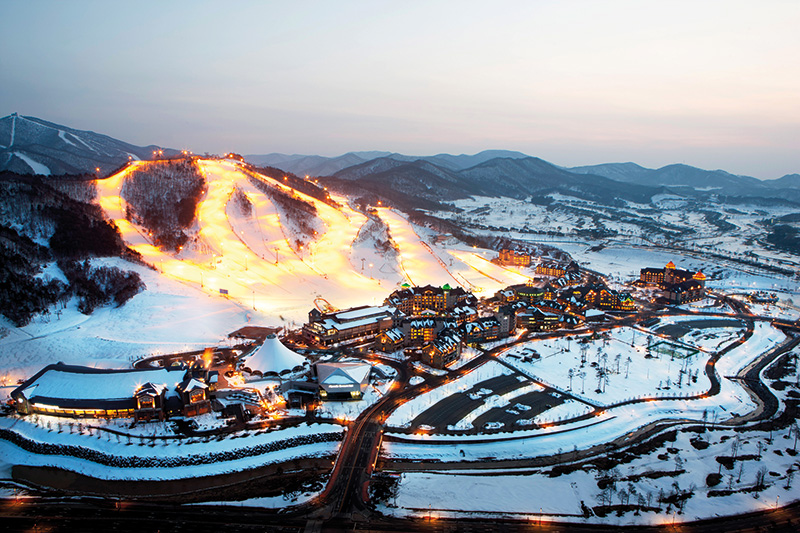 Twenty-eight years after staging it’s first ever Summer Olympic Games, South Korea is now gearing up to host the 23rd edition of its winter equivalent. On 9 February, 2018, and for the following two weeks, Pyeongchang will welcome and accommodate some 50,000 athletes, officials and media representatives from around the world, as well as thousands of spectators.

Pyeongchang fended off rival bidders Munich and Annecy when it won the right to stage the 2018 Games at a vote held in Durban, South Africa on 6 July, 2011. It was a case of third time lucky for the winner, after failed bids to host the previous two instalments. Clearly, the Korean Olympic Committee learnt from those experiences.

After visiting the venues earlier this year, I certainly got the impression the Games will run as smoothly as they’re ever likely to. To be plagued by the sort of issues the Rio Summer Games organisers are currently dealing with would be unthinkable in this ridiculously sanitised country where expedience and respectfulness are paramount to everyday life.

But there’s still much to do. The Olympic facilities are expected to cost $2.65 billion all up, with an additional $12.3 billion earmarked towards further road and transportation construction, water supply improvements, and tourism and cityscape developments. In isolation, that total figure sounds horrendous. Against the $65 billion Vladimir Putin was reported to have poured into the budgetary coffers of the 2014 Games in Sochi, however, the Koreans sound like penny pinchers.

Olympic Plaza, on the outskirts of Alpensia township, will be the Games’ spiritual hub. It will contain the Olympic Stadium, where the opening and closing ceremonies are to be held, alongside the athlete and media villages. Once completed – a September 2017 target date has been set – the villages will accommodate an estimated 6,300 athletes and officials from around 100 countries, as well as a staggering 45,000 officials and media representatives. 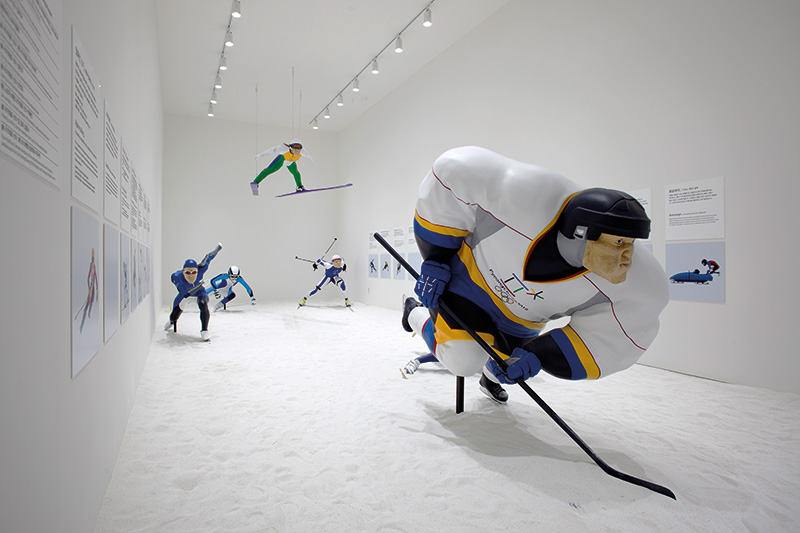 Many of the venues are still under construction. Until then, an information centre in Gangneung – called Pyeongchang House – will serve as a focal point for the public, outlining the preparations being made for the Games and the venues where each event will be staged.

The building opened on 4 January this year and is laid out in different sections. They include an entrance corridor detailing the history of Pyeongchang’s bidding process, a central exhibition hall, a 4-D Experience Centre with animated simulators of ski jumping and bobsleigh events, and colourful Wishing Trees designed for guests to express their desires for the Games.

All ice sports events at the next Olympics will take place in Gangneung, an east coast city comparable in size to Geelong or Wollongong and with an enviable selection of beaches that attract summer vacationers. Gangneung is only 250 kilometres by road from Incheon Airport on the opposite coast. It’s a journey that currently takes more than three hours to drive. However, that journey time is in the process of being cut down to just 68 minutes with the introduction of a KTX high-speed train service. Stops will be incorporated in the Pyeongchang mountain regions and the railway will be able to travel at speeds in excess of 300 kilometres per hour.

Gangneung Oval is being built for speed skating, with separate venues staging men’s and women’s ice hockey matches and the new Gangneung Ice Arena combining figure skating and short track speed skating under the one roof. It is at the two skating venues where the Koreans hope to dominate, with all but two of the nation’s 53 Olympic medals being won on the speed skating tracks, particularly short track. Figure skating darling Kim Yuna has been the only exception after she gained top honours in Vancouver then backed up with second place in Sochi two years ago.

The Gangneung Curling Centre, opened in 1998, is the only existing structure, though it too will undergo renovations to enlarge its seating capacity. All other new centres must be completed by February 2017, in time for a mini Olympic Games test event.

The three sliding sports are to take place at the Alpensia Sliding Centre – one of just 16 in the world. Bobsleigh, luge and skeleton contestants will speed down a 2018-metre-long track that is close to completion. Other associated buildings and facilities are still under construction, with an expected delivery date of February 2017 date earmarked. 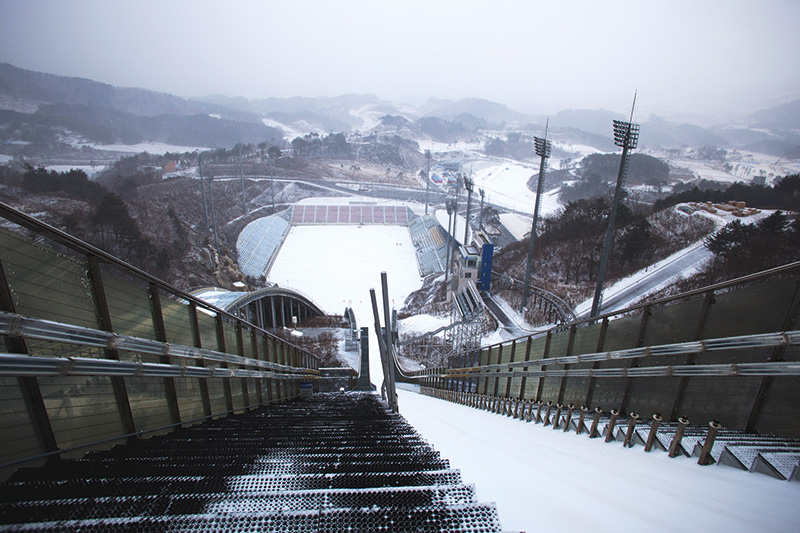 The Sliding Centre forms part of the 250-hectare Alpensia Sports Park complex that includes Biathlon, Cross-Country and Ski Jumping Centres. Little is to be done on each of those, save for a windshield to be erected behind the ski jump starting position to reduce air turbulence.

For most spectators, it’s the snow sports that are the most eagerly anticipated. Yongpyong, just 10 minutes’ drive from Alpensia, is Korea’s premier winter resort and it has been assigned the technical Slalom and Giant Slalom events. Established in 1975 as the first skiing facility in Korea, it is the country’s highest winter resort, rising to an altitude of 1,458 metres at Dragon Peak.

The resort stretches across the ridge of Mt Balwang, and the pistes and facilities are of a standard matching anything you’ll find in Australia. But like all winter resorts across Korea, après ski opportunities are limited. And with regards to the reliability of snow falling when you need it to, Korea languishes against the likes of Japan, Europe or North America.

Yongpyong averages 250 centimetres of snow per season and early February – when I visited – should have been peak season. Yet the slopes would have been barren if not for the round-the-clock work done by the countless snow machines flanking each run. It was the same story at Alpensia and Bokwang Phoenix Park. 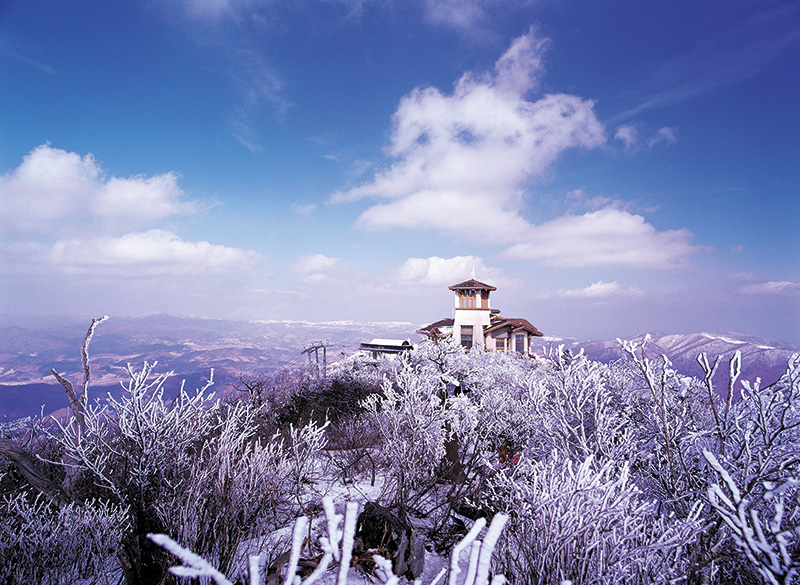 At least all pistes remained open though, with just one exception on the day I skied at Yongpyong. A 3,710-metre-long gondola ferries skiers, snowboarders and sightseers to the top of Dragon Peak at a rate of five metres per second. When I stepped onto the summit, the winds howling across the peak were enough to separate a skier from his bindings. Four parallel pistes running down the eastern face of the mountain were consequently closed and it is on these slopes – called Rainbow I, II, III and IV – that the Slalom and Giant Slalom events will be held in 2018.

Further west, Bokwang Snow Park is the closest large resort to the Korean capital of Seoul and the country’s international airport at Incheon. More commonly known here as Phoenix Park, it is a 2.5-hour drive through rolling hills on the Yeongdong Expressway, though that commute will reduce rapidly with the introduction of the KTX express railway.

Bokwang opened in 1995 and features high-rise condominiums that lord it over the lower slopes. It has captured a market niche as the preferred venue for the snowboarder-dominated younger generation. Twenty-two ski slopes cascade down Taegi Mountain, where the facilities include a snow park complete with a half-pipe, tabletop, round quarter and rails, and the 2.2 kilometre-long Panorama Slope.

As such, the resort will host the Freestyle Skiing and Snowboard events for which the finishing touches were being done for a test run a week after my visit. Reigning Olympic freestyle skiing champion Joss Christensen and slopestyle snowboarding champion Jamie Anderson – both representing the USA – were among those to have competed, with Anderson taking the gold medal in her pet event. 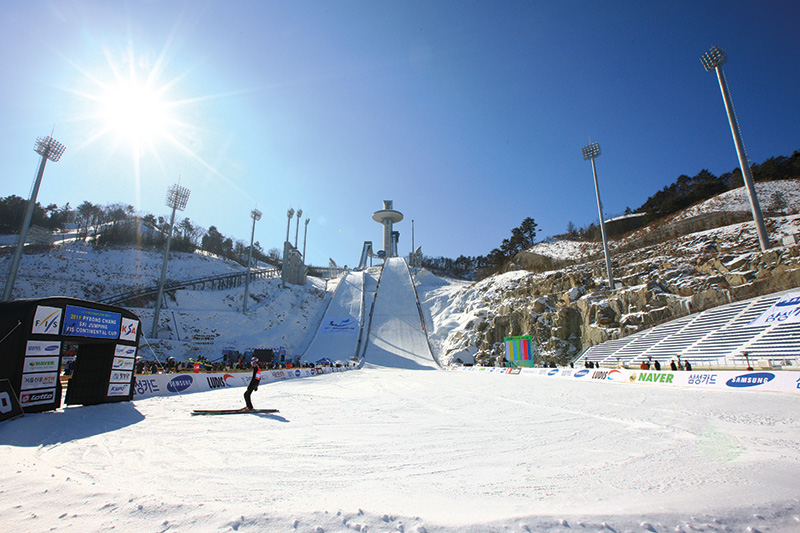 The blue riband Downhill events will be staged further south on a purpose-built 2.9-kilometre-long course on Gariwang Mountain in Jeongseon County, close to the existing High One Resort. At present, it takes around 90 minutes to drive from Alpensia or Yongpyong to Jeongseon, though direct road and railway lines currently under construction will cut that time down to under an hour.

The new Jeongseon Alpine Centre was officially opened on 22 January this year and the nation’s first ever World Cup men’s downhill races debuted shortly after on 6 and 7 February. The 2016 AUDI FIS Ski World Cup was the first in a series of 28 test events in preparation for the 2018 Olympics. A Super G event took place the following day, as it will in less than two year’s time.

Much like the Olympics are expected to be, the event was hailed as a success. Only a handful of Italians grumbled about the course not being challenging enough.

But I’m no Olympic-standard skier. And until I reach that level of expertise, South Korea’s mountains will suit me just fine, thank you very much. •

Where to stay
The 4.5-star InterContinental Alpensia Pyeongchang Resort is a convenient base for skiing and snowboarding in and around Pyeongchang. It’s located on the doorstep of the family-friendly Alpensia Resort, just 10 minutes from Yongpyong and a 30-minute drive from Bokwang Phoenix Park.
+82-33/339-0000; ihg.com

What to do
No Korean visit is complete without experiencing a Korean barbecue. You can dine in a full-service restaurant the first time then cook your own around an intimate grill thereafter.