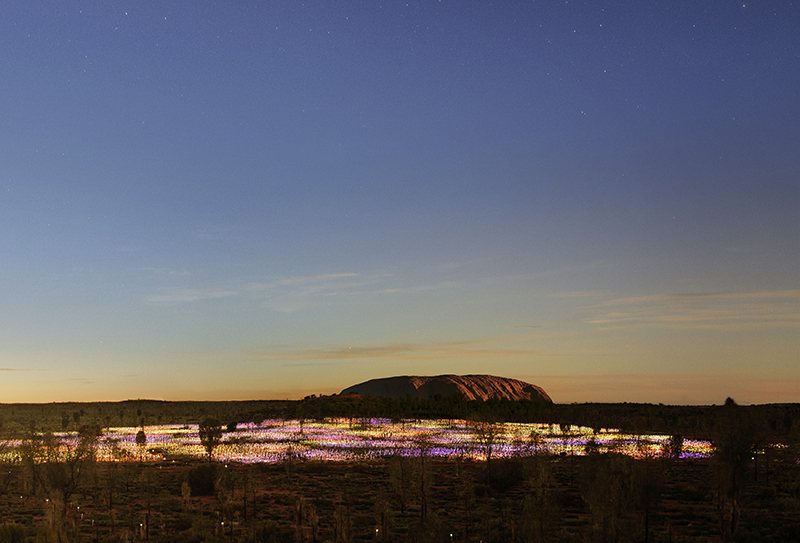 It was a big and bold idea at the time. Setting up a huge dinner under the stars on shifting sands a dingo’s howl away from Uluru. It was March 1993, and the guests who turned up for this new-fangled idea were just as enamoured by the sun setting over the spiritual heart of the Red Centre followed by a dinner under the stars as we are, 25 years later. This epic idea struck a chord with visitors, so much so that it was inducted into the Tourism Australia Hall of Fame in 1999.

The experience starts with a bus ride to the Sounds of Silence dinner locations hidden like jewels amid the desert oaks, where we are met with canapés and drinks and marvel at the changing light over Uluru and Kata Tjuta. Heads swivel from one to the other and cameras and phones click and whirr to capture the varying hues. We then mosey down to the dinner location, tables beautifully set, and tuck into a three-course feast with many dishes featuring bush tucker ingredients, such as lemon myrtle, quandong, native pepperberry, finger lime and saltbush. 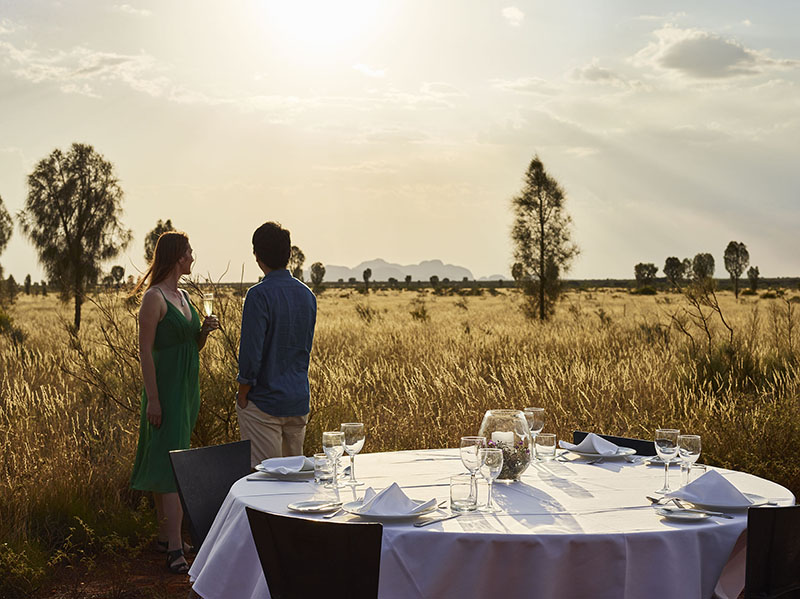 During the evening, the lights dim, leaving us under a ceiling of stars, with a star guide pointing out constellations and galaxies, as well as explaining the indigenous take on some on some of them. Telescopes are available for those who want to get up close to planets. The sheer scale of the night sky is overwhelming and, as we look at stars that are thousands and millions of years away, I wish Doctor Who would turn up with his TARDIS to whisk me away up there. 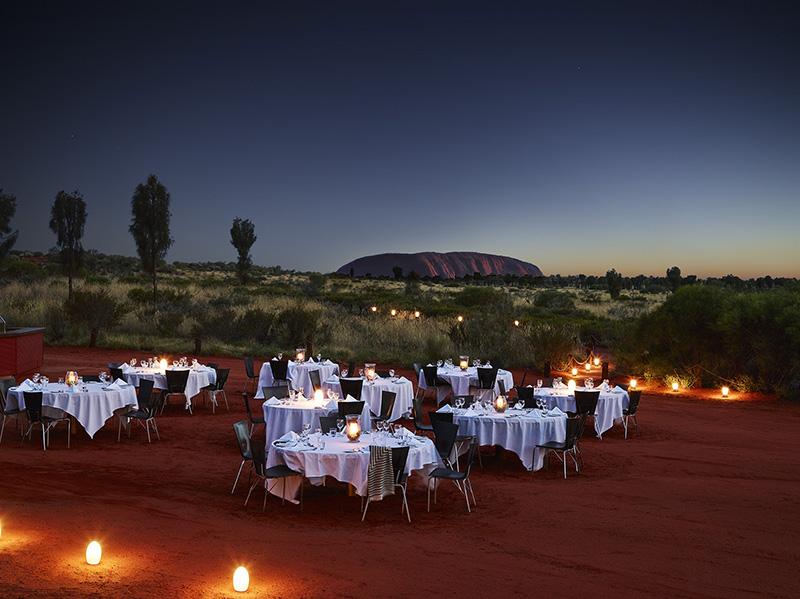 Stars are also on the agenda at the more upmarket Tali Wiru (beautiful dune in local Anangu language), where a team of chefs headed up by executive head chef Vanessa Grace conjure up the most magnificent four-course meal in a tiny shack without electricity. Another beautiful sunset show has us marvelling again at Uluru and its many shades, the beauty of the scene almost matched by the exquisite meals we are served in style, accompanied by perfectly matched Australian wines. The wagyu beef fillet with salt-baked celeriac, paperbark smoked onion soubise, king brown mushroom and smoked bacon jus melts in the mouth and the dessert of Aussie pav with camel milk gelato, passionfruit curd, berry salad and green ant meringue – yes really – still makes me salivate when I think of it. 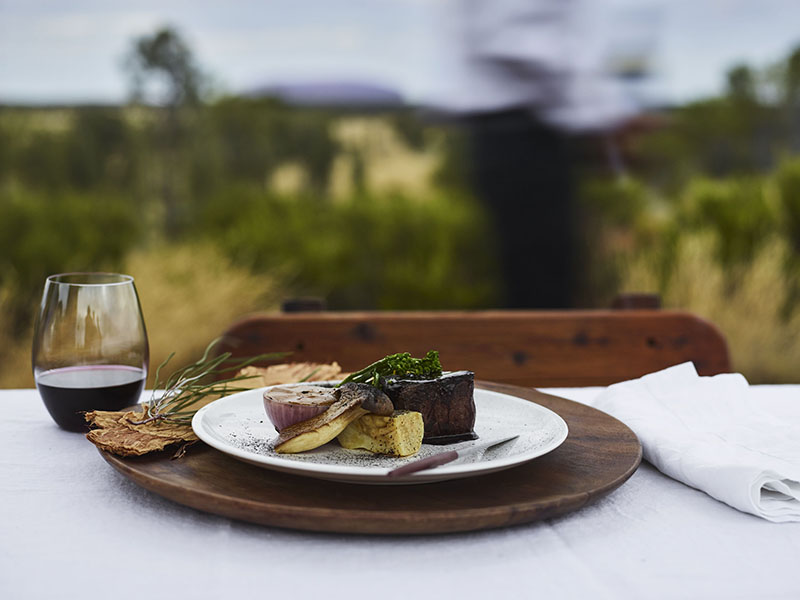 Another experience to add on to these culinary beauties is the Field of Light, an immersive installation by internationally acclaimed artist Bruce Munro. This work of art switched on
for the first time on 1 April, 2016 and has proven to be so successful it has been extended to 31 December, 2020.

We are lucky enough to meet the affable and warm-hearted Englishman Munro along with his wife Selena and hear the story of how he first thought of the idea. They were bumping around Uluru in a rundown car in 1992 before heading back to the UK after living in Australia for eight years. He jotted the idea down in a sketchbook, never thinking it would see the light of day – or night – as it were. 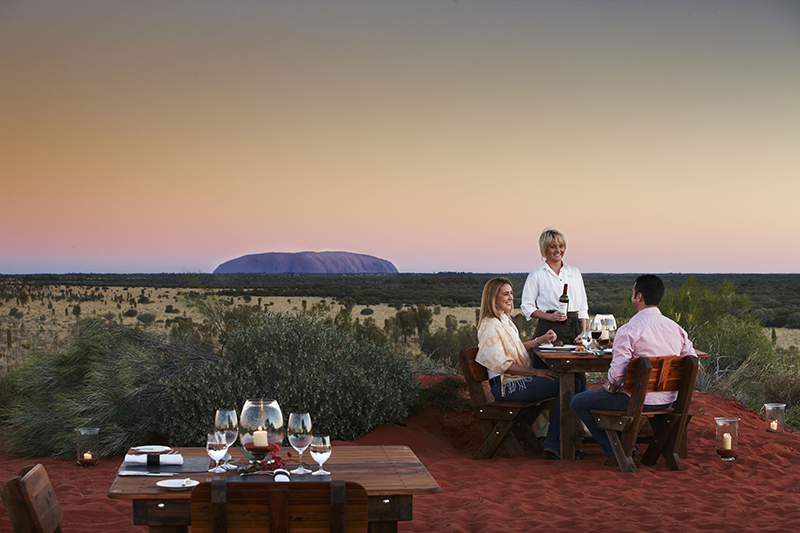 But here we are, at an ungodly hour of the morning with the sky an inky black, until we come upon what is the equivalent of nine football fields ‘planted’ with beautiful orbs glowing in the dark. This garden of 50,000 bulbs on swinging stems is solar powered and the vision of the blue, white, violet and ochre orbs, surrounded, or is that protected, by tangles of spinifex, is mesmerising. Even as the night sky turns deep purple with the oncoming sunrise, and then a pretty pink, the garden still glows, until the light wins the battle and the landscape returns to its ancient hues of red and green. 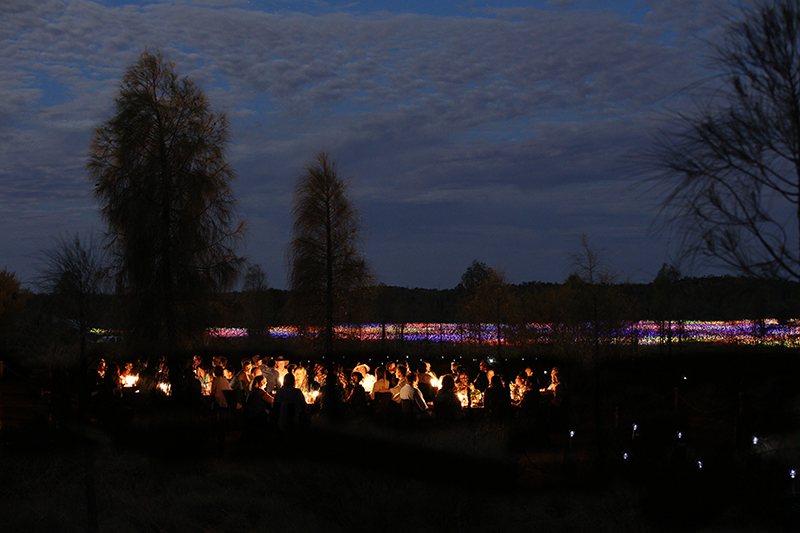 Afterwards, on a dune top drinking coffee and tucking into an egg and bacon roll, we notice Uluru peeking up in the distance, and Munro shares with me that it was a lovely surprise to see how the foliage intertwined with his creation, making it even more interesting. Mid-bite, I nod in agreeance.

There are so many things to do around Ayers Rock Resort, you are going to have to choose – either that or stay two weeks to fit them all in. We don’t have that long so after our sunrise Field of Light experience we change tack and go for a Camel Express morning ride with Uluru Camel Tours. The 45-minute ride is a great way to learn about these extraordinary beasts and, back at the base, we learn even more about their history in the Red Centre of Australia. 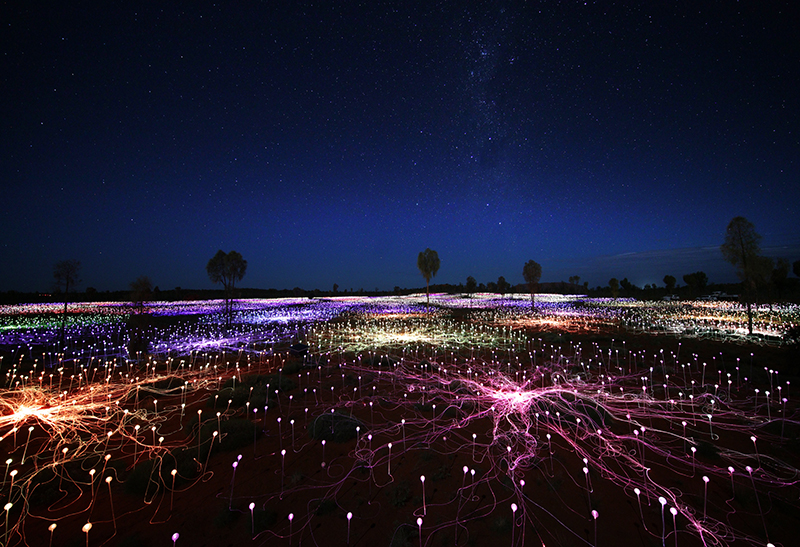 For first timers, the Desert Awakenings Tour to Uluru is a must, bringing you up close to the spectacular monolith with its incredible textures, colours and spiritual feel. Mutitjulu waterhole is a highlight, as are the ancient rock art paintings on the Mala and Kuniya walks. We don’t have time for this tour this time around, but we do have time to visit Kata Tjuta for the first time. We join an AAT Kings Sunset Tour, learning
a lot about this spectacular formation of ‘many heads’ on the 40-minute drive. Kata Tjuta has 36 domes, or heads, the red rocks showing all kinds of colours and textures in both sun and shade. We stop at a viewing point and partake of a beverage or two as the sun sinks lower in the western sky. The guide tells us all about the walks through Walpa Gorge or Valley of the Winds, and further whets my appetite for another visit to the spiritual heart of Australia. •

Getting there
• Virgin Australia flies to Uluru from Sydney. virginaustralia.com.au

Where to stay
Ayers Rock Resort consists of six accommodation options including the luxury Sails in the Desert Hotel, the newly renovated Desert Gardens Hotel, Emu Walk Apartments, the Outback Pioneer Hotel & Lodge and the Ayers Rock Resort Campground. The Lost Camel reopened 1 July 2018 with edgy contemporary studio-style rooms.
We stayed at Sails in the Desert, which has 228 rooms and suites, the excellent Red Ochre Spa (ask for Jackeline for one of the best massages you are ever likely to have), a large swimming pool, and the Ilkari Restaurant. ayersrockresort.com.au 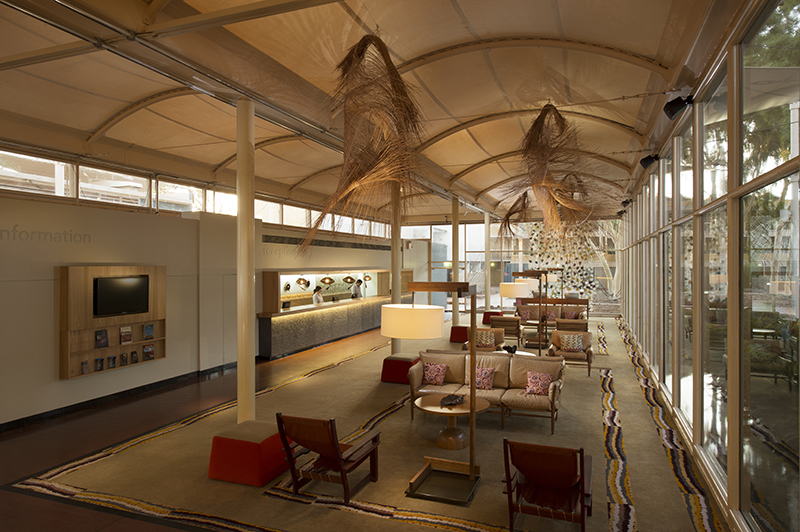 Dining experiences
• The Sounds of Silence dinner can be upgraded to include the Field of Light.
• Tali Wiru runs between March and October, with this year’s season closing 15 October. You can add a helicopter transfer with sightseeing to further blow your mind.

Tours
• AAT Kings offer a selection of tours to Uluru and Kata Tjuta as well as further afield to Kings Canyon. inspiringjourneys.com; aatkings.com 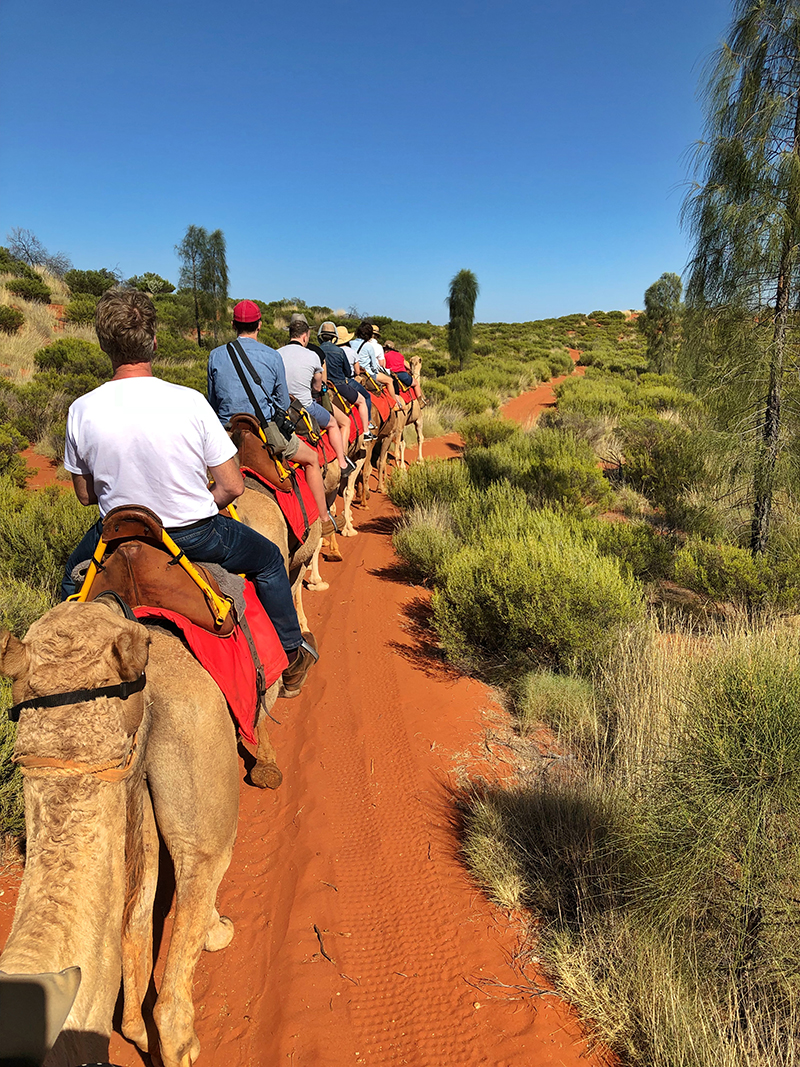