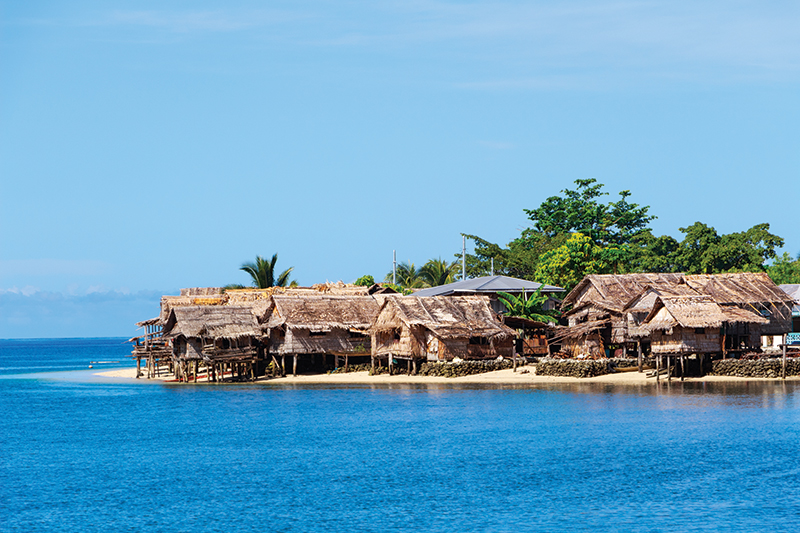 Until recently, Pacific Island holiday options rarely included the Solomon Islands. But, as if they just rose out of the ocean, these charming tropical islands are now regularly appearing in various “Hot Destinations for 2016” lists. Many who visit now lament that they didn’t discover the considerable delights of the islands earlier. Diving, snorkelling, swimming, history, or just hanging on the beach sipping a local beer while basking in the warmth, are some of the attractions.

The odd one out in that list is history. If you have an interest in war history you’ll know much of it already but if you don’t you may be surprised to learn that some 30,000 Japanese troops were killed in the Guadalcanal campaign (that’s the island where Honiara, the capital, is located). There are both US and Japanese War Memorials on hills overlooking Honiara.

It’s worthwhile seeking out the Vilu War Museum about half an hour’s drive to the west of the capital. While it may be hard to find and is unprepossessing at first glance, this outdoor museum is an unexpected treasure trove of artillery, shells and aircraft in beautiful gardens. It was founded by the late Fred Kona from wreckage he found all over the islands after the war. You’ll find various bombers and fighters from both sides of the conflict as well as some memorial plaques. There’s a Japanese Betty bomber, a Corsair and Lockheed Lightning. But most amazing is a Wildcat fighter for which the wings still easily rotate for storing on aircraft carriers. There are no directions so you’ll need a knowledgeable guide.

There’s also a way that you can combine history with the Solomon’s ever-present love of the water. Normally, underwater wrecks are the domain only of SCUBA divers. But there are several Solomon Island wrecks that are easily viewed by snorkellers, too. Perhaps the most remarkable is the downed Grumman Hellcat fighter aircraft in about nine metres of calm water near Ferguson Passage not far from Ghizo Island. The other is the Kinugawa, a Japanese supply ship only a few metres off Bonegi Beach, Guadalcanal. 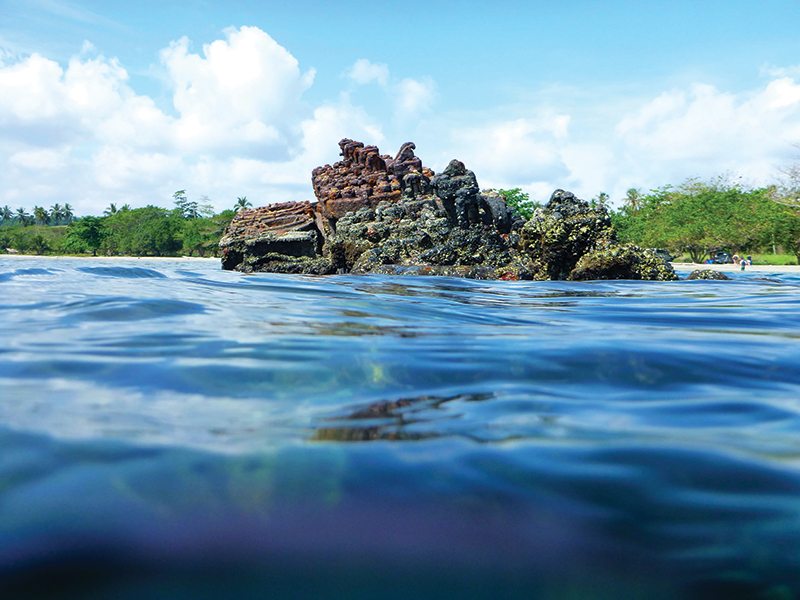 Kennedy Island, also near Ghizo, is a link between the Solomon Islands and the US presidency. And it’s a strong one. During WWII, in 1943, JFK was shipwrecked on a tiny island with 10 of his crew members from the PT109. Kennedy heroically dragged an injured seaman on the arduous four kilometre swim to safety. After a week on the island they swam to another island from where they set out for help. Two locals took his message to the US base and Kennedy and the crew were all soon rescued. You can now visit Kennedy Island, a tiny speck of land not far from Ghizo (the island or Gizo, the town). JFK stayed in touch with, and provided funds to, his rescuers during his ill-fated presidency.

Getting around the Solomon Islands is accomplished by a combination of plane, boat and car or a combination of these. Flying into Gizo is a prime example. When you have your bag don’t go looking for a taxi rank. Rather you’ll be led a very short distance down to a dock and taken to your destination by boat. As the airport recedes you’ll see that you landed on a small islet completely taken up with the airstrip, terminal and dock.

Our destination was nearby Sanbis Resort on tiny Mbabanga Island. The general atmosphere throughout the Solomons is one of island relaxation and that certainly extends to the resorts. Sanbis’ only access is by boat and the rooms are rustic huts along the shoreline. The restaurant serves some of the best meals in the Solomons and the bar at the end of the jetty supplies ice-cold Sol Brews. A word of praise must be extended to Sol Brew. The tropical heat of the Solomons is the ideal climate for a cool beer at the end of the day. Fortunately, the local and ubiquitous Sol Brew is perfect for the occasion.

Our first day in the Solomon Islands was the perfect introduction. The islands have yet to develop the veneer of tourist sophistication where culture is confined to “island nights” complete with coconut shell bras. Here the island culture is omnipresent and real so you can immerse yourself in it. From Gizo – or Sanbis – it’s a pleasant boat ride to visit a traditional Solomon Islands village: the Boeboe Community on Kohinggo Island where we were made to feel very welcome. On the way, we passed Kennedy Island and on the way back we snorkelled in Ferguson Passage.

Two related joys of the Solomons are the wealth of underwater life and the remarkable clarity of the water. So not only is the water visibility very good for snorkelling and diving but there’s also excellent diversity of marine life, with healthy reefs and lots of fish. Add wrecks and rays and you need to pack your swimmers and snorkel and go. Fortunately Solomon Airlines has a generous 30kg baggage allowance. However, despite these attractions, it’s still not flooded with tourists. The most recent figures show that tourism to the Solomons was up 15 per cent in April (year on year) and almost half of those visitors were Australian. But that still only amounted to 1750 visitors for the month.

The island of Malaita should be high on the list for any visitor. But it isn’t at present because a land dispute has suspended flights from Honiara to the island. So it takes some effort to get there: you need to take a fast ferry (an ex-Australian Fantasea catamaran) for the voyage of several hours to Auki on Malaita. There are hotels here but I’d suggest arranging to be picked up by small boat and taken 40 minutes across Langalanga Lagoon to Busu Cultural Village. There’s a homestay here, clean yet basic and certainly offering complete immersion in local village life. 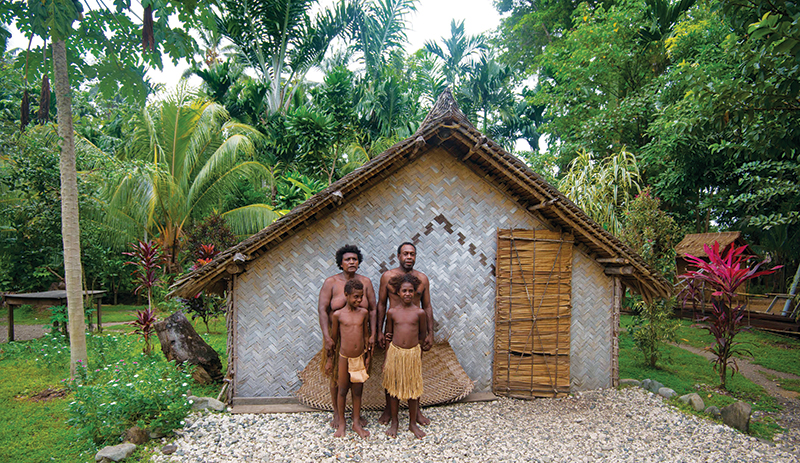 But the main feature of Busu is that it is truly unique in one special way: the villagers spend some time every day making shell money and are happy to show you the process. Shell money is used locally instead of regular currency (Solomon Islander Dollar) for important transactions like bride money and dispute settlement. The perfect time to visit Busu is in August when the annual Shell Money Festival takes place with lots of singing and dancing and includes a mock wedding that shows how shell money is the vital part of every dowry. To learn more about shell money, head to the National Museum & Cultural Centre in Honiara to see it and other forms of money including rare feather money. The shell money of Malaita can be found for sale in the Honiara markets.

Honiara is more a stopover than a destination but there are enough activities to occupy a few days. One of these is a visit to the bustling markets, particularly on a Saturday. Of course, a lot are food stalls, including interesting fish and impressive lobsters ones plus others selling a range of exotic nuts and fruits, but there are also handicrafts like shell money and carvings for sale.

The Heritage Park Hotel, Honiara’s best hotel, is located on the waterfront across the road from the GPO. The gardens are well maintained, the rooms are clean and well equipped and the services and food are good. The hotel is also well located for a visit to the relaxed Point Cruz Yacht Club behind the Visitor Bureau. It’s a great place for a drink by the beach on a hot day. It also has an Indian restaurant that serves some authentic fare at reasonable prices.

Just outside Honiara, past White River stands a village where you can go back in time. The Lumatapopoho Cultural Community is home to the ‘Moro’ cultural movement that has set aside part of a regular village to live life the way life here used to be. Be prepared to be greeted by largely naked people and a traditional kava welcome ceremony then be shown around to gain a complete picture of how the local environment has always provided shelter and food.

If you are looking for jet-set sophistication the Solomon Islands are not for you. But if you’d like to discover a destination where the natural attractions prevail and their culture is still a way of life, you might like to join the travellers taking the short flight to the Solomon Islands. •

Getting there
From Brisbane the flight to the Solomon capital of Honiara takes just over three hours. From Sydney it’s only an hour longer. flysolomons.com