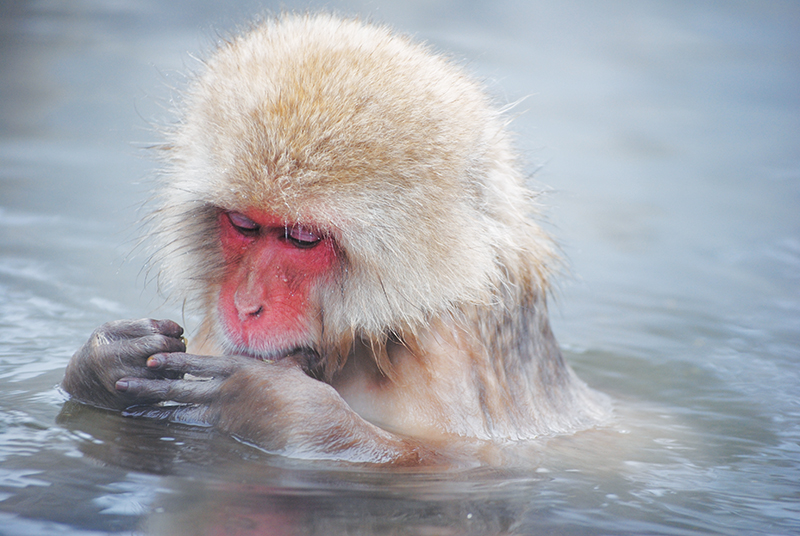 Ever since the discovery of so-called “Japow”, Aussies have been flocking to Japan’s mountain resorts in ever-increasing numbers. Mountain resorts such as Niseko, up north in Hokkaido, and Hakuba, in Nagano on the island of Honshu, have now become so popular with Australians, the mountain culture is more Australian than Japanese. The cafés sell hamburgers, chips and pizza and the bars sell Australian lager.

You’ll often hear these two resorts compared as if there were no other choices, but in fact Japan has over 500 ski resorts, as many as the United States, in a country that is a fraction of the size. 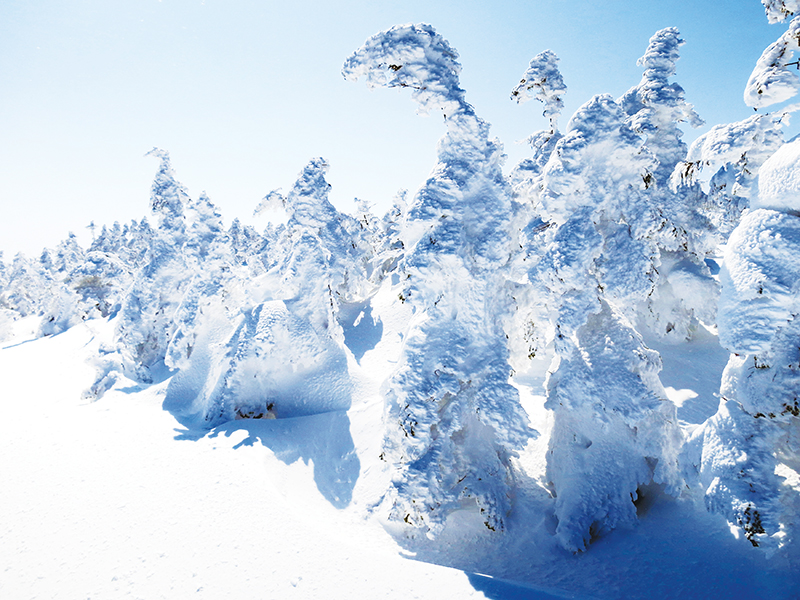 With 19 ski areas in total, Shiga Kogen is one of the largest mountain resorts in Japan – possibly in the whole of Asia. A lift pass will get you on all 53 lifts and while there are regular shuttle buses between each ski area, with a couple of exceptions, it is possible to ski from one end to the other, passing through a few rather interesting connecting runs.

Most mountain areas in this enormous park have a variety of runs ranging from green to black, so they are accessible for beginners and there are certainly enough challenges for the more experienced.

There is also an interesting variety of lifts, ranging from single chairs to gondolas, my favourite being the vintage lemon-coloured egg gondola – while it looks like a relic from the 1960s it gets you up the mountain pretty quickly. 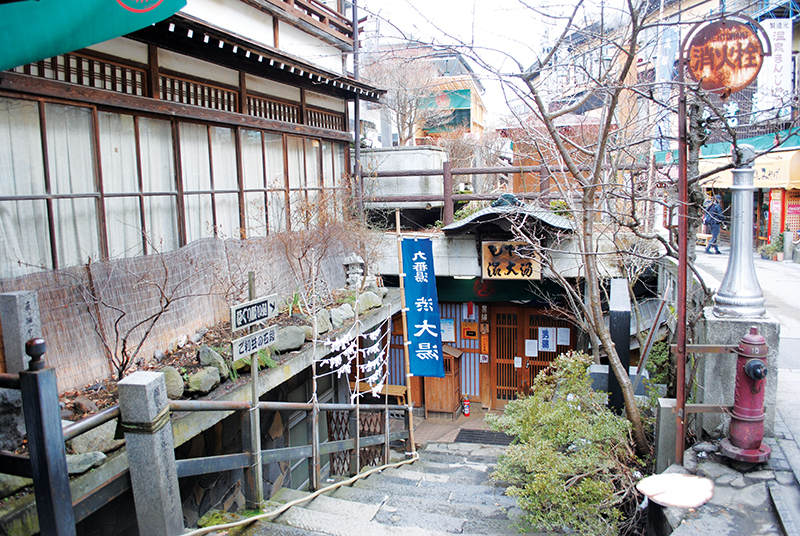 And you won’t find meat pies and sausage rolls in the cafés on piste. Instead, there’s a choice of Japanese curry, katsu or spicy ramen.

Shiga Kogen sits inside Joshinetsu National Park and it is surrounded by a rather stunning wilderness, famous in winter for its Snow Monsters or ‘Juhyo’. These are pine trees so heavily laden with snow that they resemble giant monsters frozen in time. You can ski through a large forest of monsters on top of Mt Yokoteyama – where, at 2307m you’ll also find Asia’s highest Starbucks.

At each end of Shiga Kogen there are ski-only areas, one of which is the only route down from Starbucks, and as a skier, it is kind of nice to ski down the mountain without the ominous sound of boarders shredding the slopes behind you.

If you’re a boarder, it’s worth visiting nearby Ryuoo Ski Park and X-JAM Takai Fuji, about 40 minute’s drive from the main ski-area of Shiga Kogen. 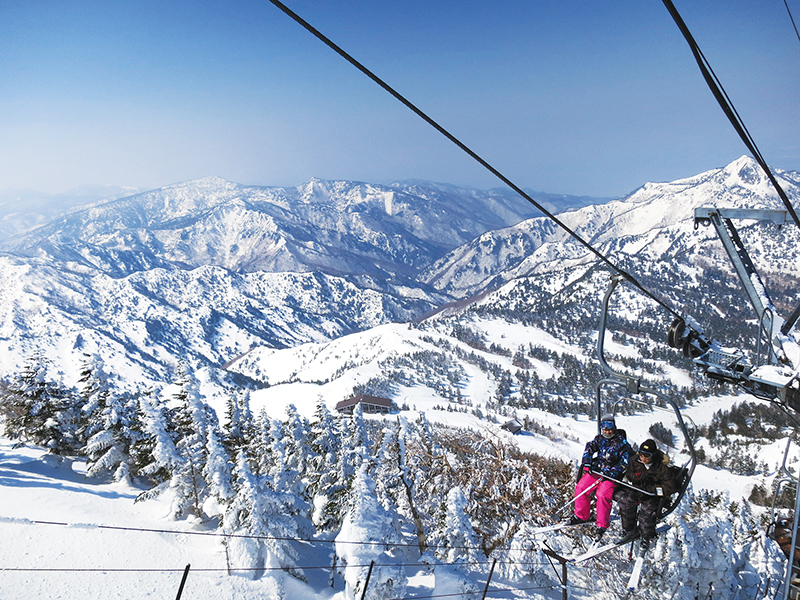 You’ll notice the predominance of boarders here within moments of arriving. About 90 per cent of people were on snowboards when we were there. The resort was designed with a younger market in mind, and your journey down the mountain is accompanied by Japanese pop pumping through the loudspeakers.

There are several beginner runs on the lower slopes, but from the top of Ryuoo Ropeway, one of the largest gondolas in Asia, only black runs cut down the mountain. These slopes can be as steep as 38 degrees with waist-deep powder, and while some are more open than others, some are mere corridors, and if that’s not challenging enough, you can go off-piste through the forest.

In between the two resorts is the onsen town of Yamanouchi, which is surrounded by some of Japan’s oldest onsen villages, some dating back to 700AD. It’s worth taking a day off skiing to explore the villages of Shibu Onsen and Yudanaka Onsen, to sample a traditional Japanese mountain experience. 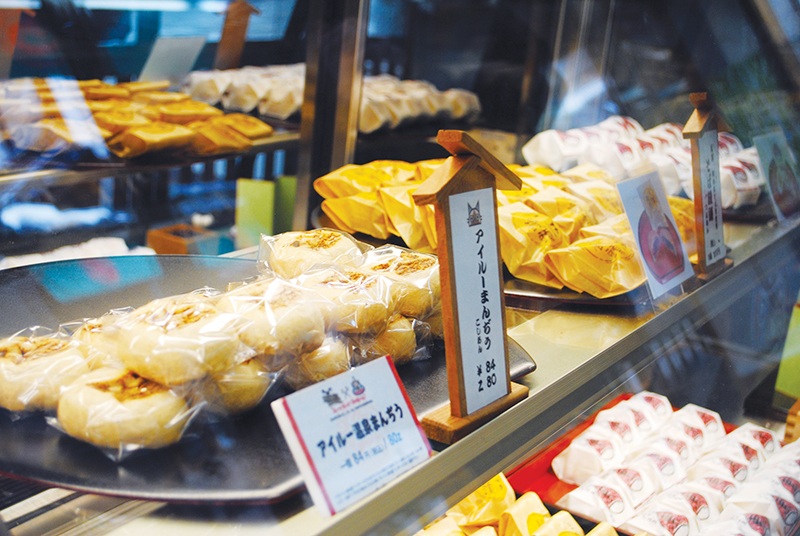 Shibu Onsen is around 1300 years old and its narrow lanes, are lined with guest-houses, or ‘Ryoken’, and public baths, or ‘Onsen’. Just down the road, the onsen inside Jigokudani Yaen Park attracts a different sort of clientele: monkeys. Snow Monkey Park is well worth visiting to see the world-famous spectacle of monkeys having a bath in steaming hot springs surrounded by snow.

While wandering these ancient onsen villages, be sure to sample a few local delicacies, such as onsen eggs and snow monkey manjus. Onsen eggs are soft boiled eggs, cooked slowly by hot springs water (roughly 70 degrees Celsius) flowing over them, the result being eggs with a white as soft as the yolk. You’ll find them for sale on an honour system throughout the village, leave your money in the basket provided and help yourself. Manjus are steamed buns with sweet or savoury filling and snow monkey manjus, with a sweet red bean filling, are a local speciality of Yamanouchi. •

•    Jetstar and Japan Airlines fly to Tokyo. jetstar.com; au.jal.com
•    The bullet train service from Tokyo departs regularly throughout the day, and takes 100 minutes to reach Nagano. From Nagano station there are regular shuttle buses to the mountain resorts, which take 60 minutes to reach Sun Valley, the closest ski area.

Where to Stay
•    Ryokan Biyu no Yado is in the onsen village of Yudanaka. It’s definitely worth staying here at least one night to explore the onsen villages. They have a mix of traditional Japanese and Western style rooms and the evening Kaiseki meals are an event in themselves. yudanakaview.co.jp
•    Villa Alpen is in Sun Valley, Shiga Kogen. It’s a family-run hotel and father and son are both multilingual, and extremely experienced ski instructors, having trained and worked all over the world. The bar is very cosy with an open fire and a great selection of local craft beer and home-made fruit wine. shigakogen.jp/villa-alpen