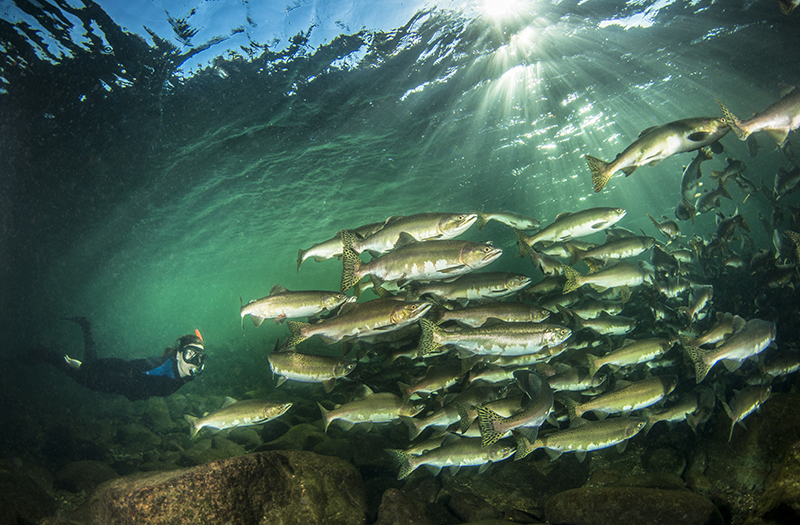 The first thing I notice about Jamie Turko is the tattoo of a bear paw print etched on his right calf. The second thing I detect is that Jamie is shirtless under his life jacket. The third thing I am aware of is that Jamie is sinewy, unlike the burly blokes who drive big truckin’ rigs around these parts. I view Jamie through a blurry lens of awe and fear. Jamie is hard core.

I am on the Campbell River on Vancouver Island and I have a date with Destiny River Adventures. Jamie is taking me on his ‘Snorkelling with the Salmon’ experience in the ‘Salmon Capital of the World’ and the only place on the planet you can snorkel with these fish. There’s eight of us on this warm August day, halfway through Jamie’s 75 days of salmon tours, which run from mid-July through to the end of September. 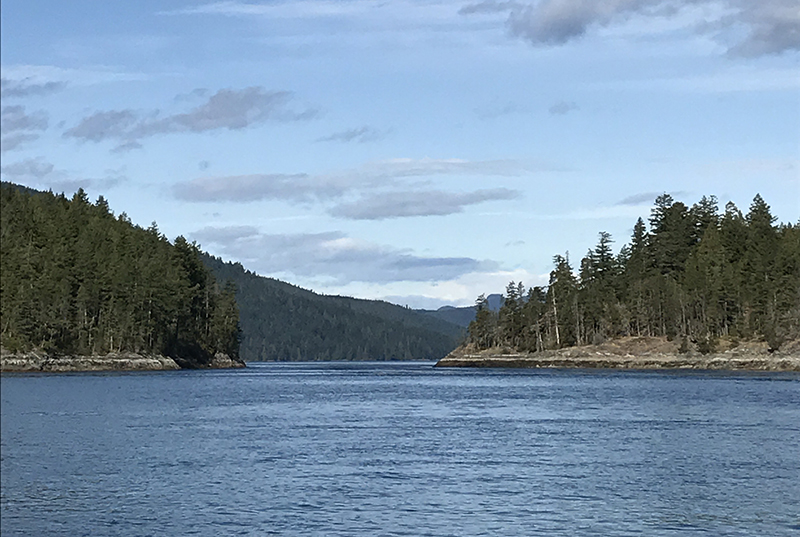 But don’t be fooled. While the air is an uncharacteristically balmy 30°C for these parts, the water is chilly. We’re talking 14°C. Take that, tropical waters off the Great Barrier Reef.

We’re kitted out in boots, jackets and pants made of thick synthetic neoprene with optional gloves and a hood, not unlike a balaclava. I’ll need to draw from my raw reserves of courage: it’s going to be crisp in that river and, for the first time, I’m less frightened of the bears I imagine lining its shores, and more anxious about the cold. I’m also a little bit scared of Jamie, who goes to great lengths to point out the many obstacles we will face on this three-hour journey.

“It’s important to lay with your face in the water and to keep an eye on the river hazards, such as the many rocks you’ll dodge along the way,” he says.

“The number one hazard is river rocks. You need to fly like Superman or Wonder Woman. At this water level, it’s like a giant game of pinball and you are the ball. The number two hazard is wood. There are also lots of fisherpeople in the river and you don’t want to be their next catch.” 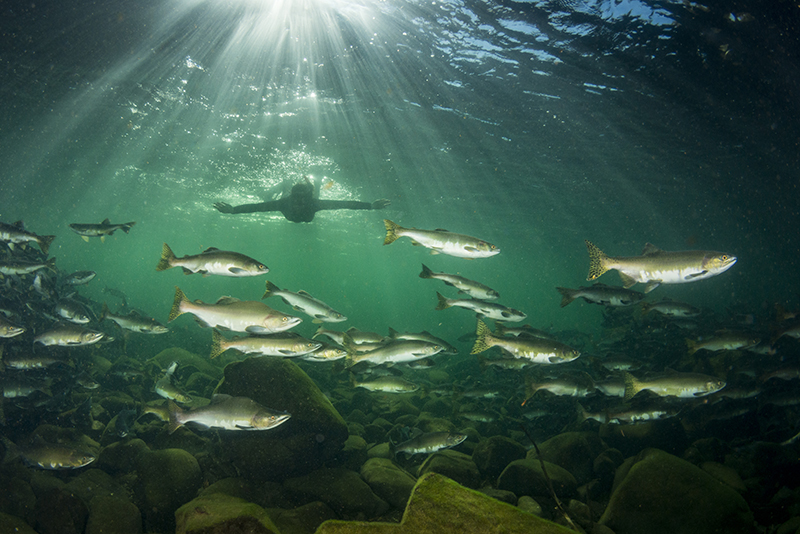 Our journey begins in a sturdy river raft that Jamie paddles to the first and relatively warmer pool where he encourages us to jump from a two-metre cliff to “acclimatise”. I’m still ruminating on the human pinball scenario and so I stay in the boat, taking photos of the others. The water here is so clean you can drink straight from the river. Jamie says he does this often. I don’t doubt it; I reckon he plucks salmon straight from the river and eats them raw, too.

Back in the boat, we paddle to the second pool where we float beside the rapids back to the raft, scores of salmon darting before our masks. So far so good. But the ride begins between pools two and three where this snorkel is about to get real. They may only be Class 2 rapids, but the water is low and the rocks punctuate the river like over-enthusiastic full stops. 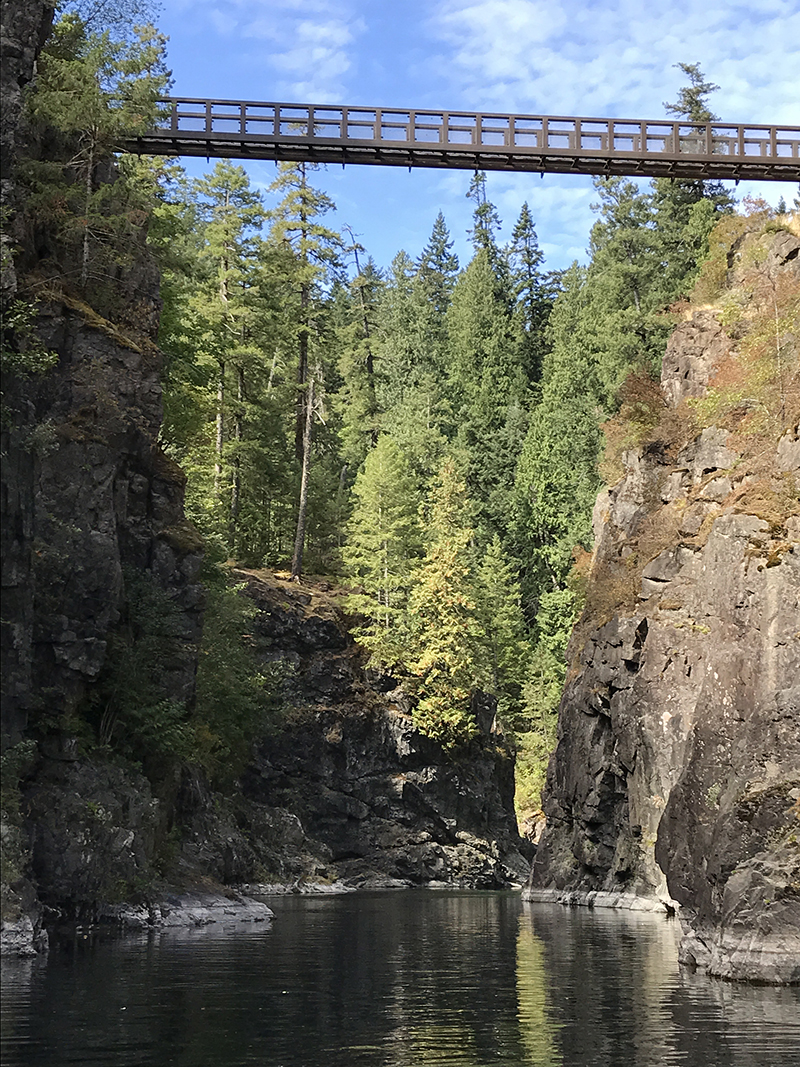 I’m still more scared of Jamie than the river and so I commit to the journey, plunging down the rapids at what feels like breakneck speed. Just when I’m about to panic, I remember his words: “Glide over or around the rocks. Keep your face in the water so your bum doesn’t drag. And just go with the flow.” I am flung around the rapids, all ragdoll, like a salmon in an angry bear’s mouth and I have no idea where the other snorkellers are.

And then the raging river suddenly stops. Calm water. My own breath. A smiling Jamie.

It’s a sanguine swim to the third pool and the temperature drops where the river meets the ocean. Curious harbour seals join us on our final leg, puppy dog eyes peering at our masks.

My core temperature is starting to drop and I climb inelegantly into the raft to shoot the breeze with Jamie, my new best mate. Bald eagles eavesdrop on our conversation from their nests above. 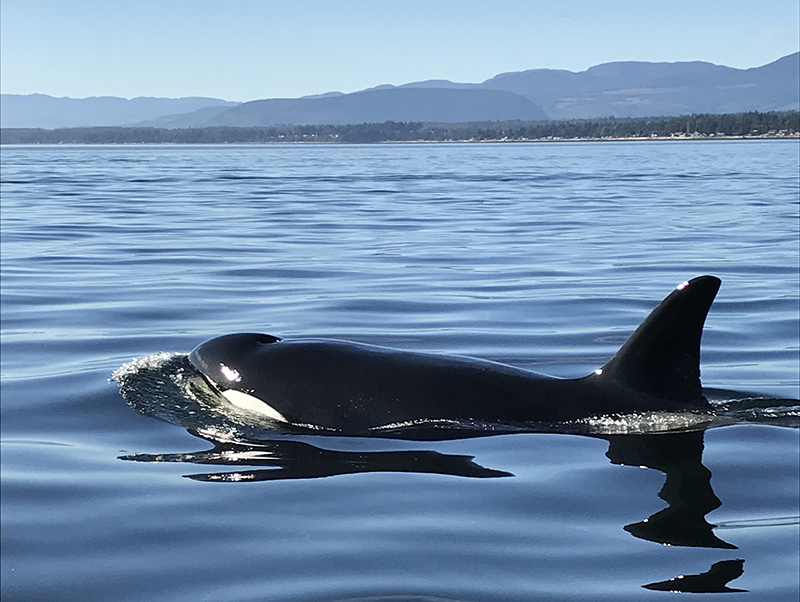 “There are 150,000 salmon in this system. The record for chinook salmon in this river system is a 39-kilogram fish. They are like giant torpedoes,” he says.

“You never know what you are going to see. We’ve had two black bears here this season so far. Last year, there were eight. There’s so much wildlife here.”

Jamie, 45, who was born and raised in Campbell River, has been exploring this river since he was 10 years old, catching salmon and selling them back to local fishermen, before launching snorkelling tours back in 1996.

“The biggest thing is to relax. Go with the flow of the river,” he says. 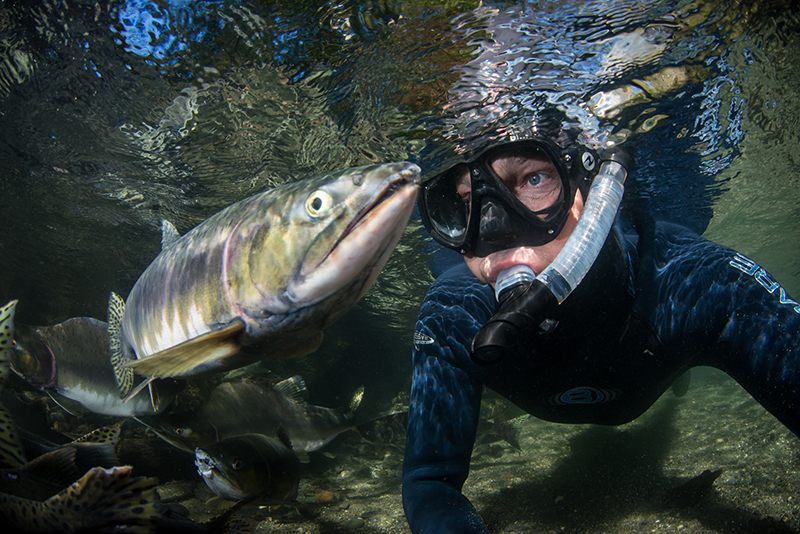 But Vancouver Island is not all about salmon. For an excellent introduction to the other sea creatures that inhabit these waters, head out with Campbell River Whale Watching and Adventure Tours where, decked out in a
‘survival suit’ you will board a zippy Zodiac and cruise the waters of the Discovery Passage in search of orcas, humpbacks, seals and porpoises.

You won’t be disappointed. The sea here is soupy with creatures between July and September with the humpbacks puffing like pack-a-day smokers; pods of Dall’s Porpoise fishing the flood tide; stellar sea lions rafting against the eddies with their fins comically raised in the air to cool down; and inquisitive orcas swimming straight up to your boat.

Back in Vancouver, take a Capilano River Explorer tour with Toursbylocals.com guide Martin Hanousek. At the bottom of the Capilano River Valley sits the river, in which the salmon are swimming and spawning. The salmon hatchery, built in 1971, was built to offset the effects of the Cleveland Dam and provide food for sports fishermen.

Martin says there’s an important relationship between the salmon and the forest. 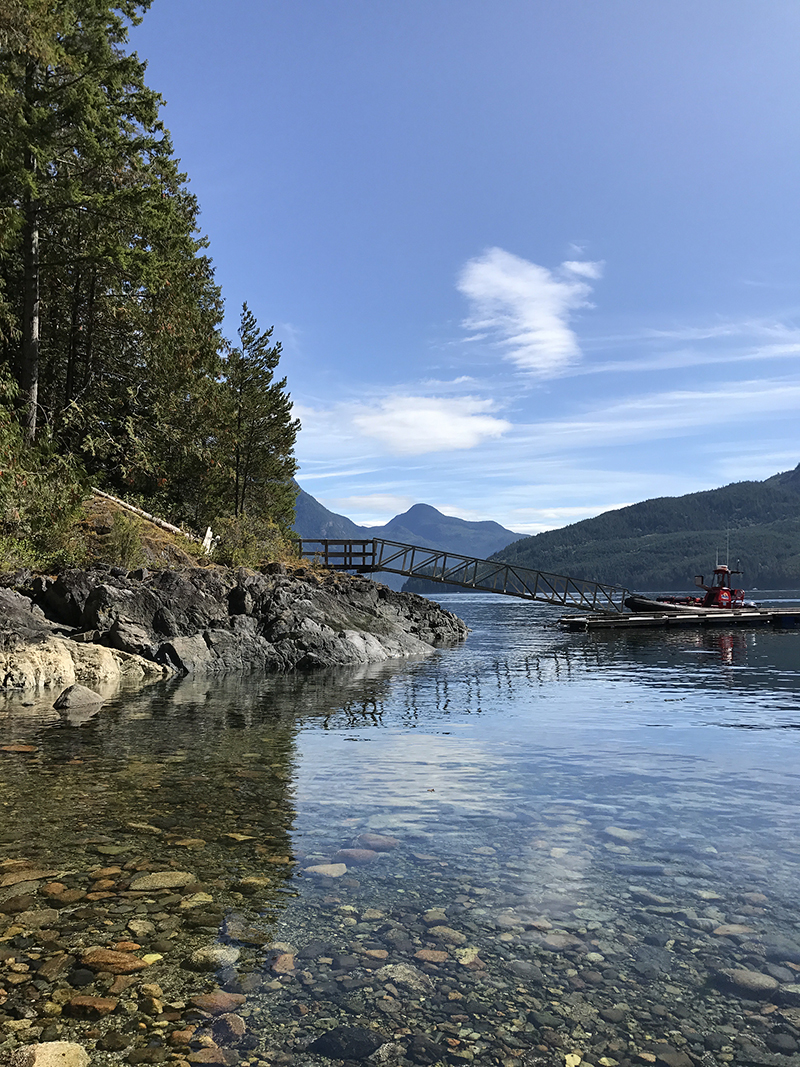 “The bears feast on salmon in the river and will gorge themselves but only eat a small portion such as the brain, skin and back muscle. They leave the fillet, the part we like to eat,” he says.

“The rest of the fish will decay and provide nutrients for all the other creatures in the forest and feed the Douglas firs. It also flows downstream and nurtures other fish. I like to say that the salmon is a creature of the forest.”

Back in Campbell River, I reckon Jamie might be, too. •

Getting there
• Air Canada flies from most East Coast capitals directly to Vancouver: aircanada.com
• Campbell River is about a four-hour drive from Vancouver or a 40-minute flight with Pacific Coastal Airlines: pacificcoastal.com