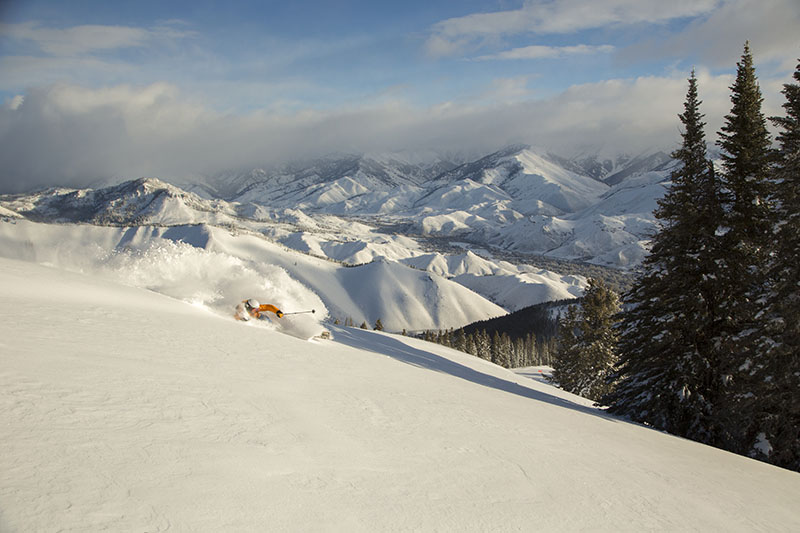 When Averell Harriman, the chairman of the Union Pacific Railroad, kicked off a search for the perfect place for a snow resort, he couldn’t have known that it would be the start of the American skiing dream.

In 1935, he employed an Austrian Count, Felix Schaffgotsch, to comb the countryside for the best location.

The count settled on an area in Idaho’s pretty Wood River Valley, near the small mining town of Ketchum, because it had good snowfall, abundant sun, low elevation and protection from strong winds. 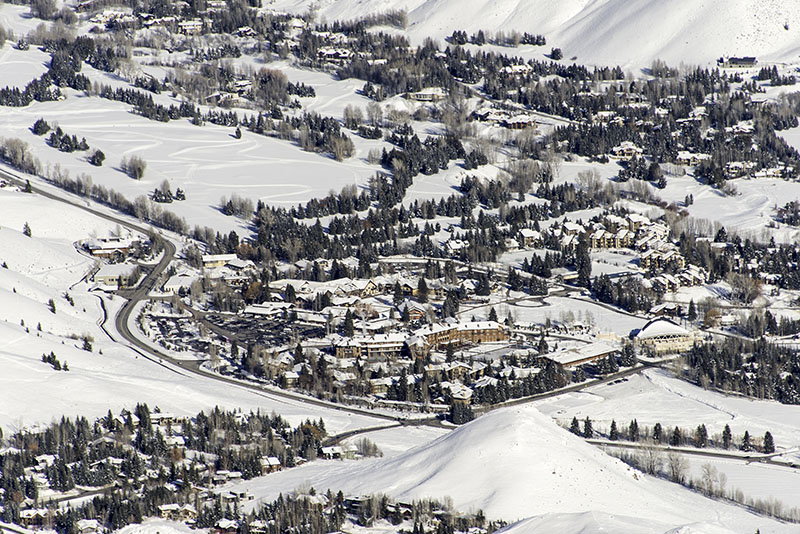 New York publicist Steve Hannigan, who put Miami Beach on the map as a fashionable destination, was soon enlisted. He named the resort Sun Valley, a nod to the 250 days of sunshine it receives each year.

By the time America’s first ski resort was ready to open, in December 1936 after a flurry of construction, Hannigan had a conga line of Hollywood celebrities ready to visit to give it immediate prestige.

Soon, Sun Valley was being seen on the covers of newspapers and magazines, such as Life, with photos of the stars gliding down the slopes on seven-foot wooden skis. 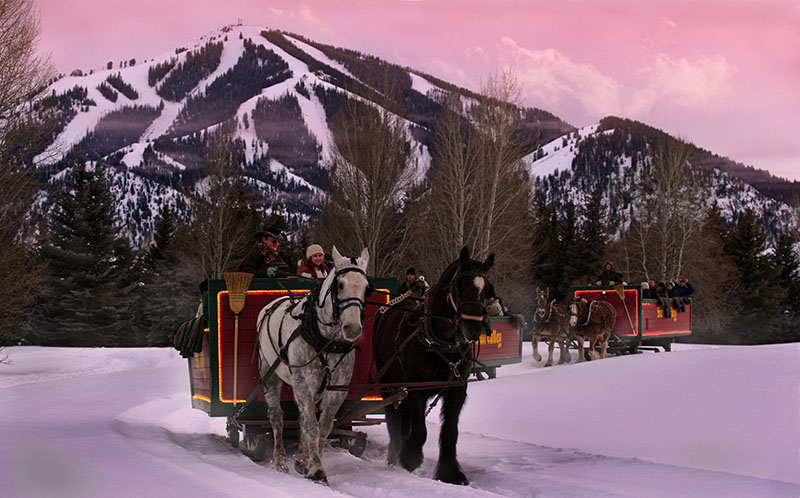 The girl-chases-boy movie, Sun Valley Serenade, was filmed there and created even more hype, featuring the famous (at the time) Glenn Miller Orchestra.

These days, the film plays on a continuous loop at the historic five-star Sun Valley Lodge, which has been the centrepiece of resort life since 1936.

The lodge underwent a major renovation in 2014/2015. The facelift delivered bigger rooms (total room numbers went down from 148 to 94), an interior refurbishment and a new fitness and spa centre, however, the historic gravitas of the building has been retained.

To walk along the celebrity hallway of the lodge is like strolling on Hollywood’s Walk of Fame. Except here, the brass stars embedded in the footpath are replaced by wall-to-wall vintage photographs of the famous visitors, among them Marilyn Monroe. 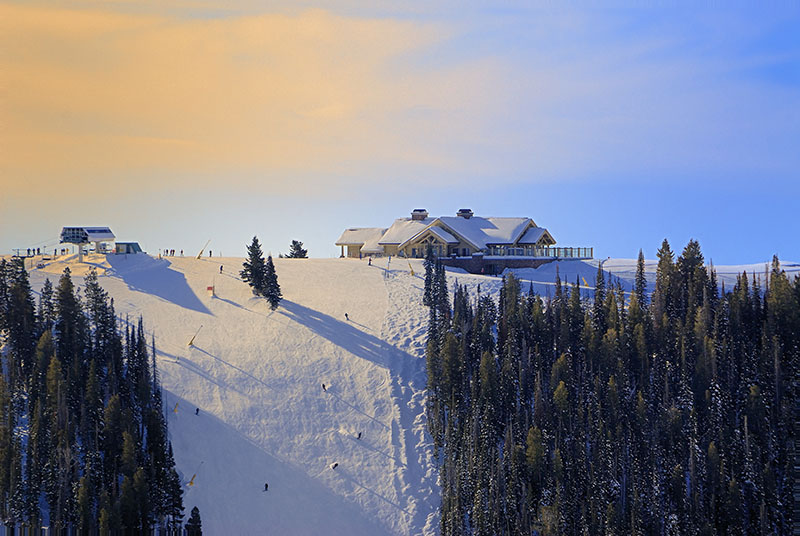 Hemingway is said to have written at least part of his novel, For Whom The Bell Tolls, while a guest at the lodge in 1939. He subsequently bought a house in Ketchum, attracted by the wilderness where he could fish and hunt, and lived there until he died by suicide in 1961 (some say his death was an accident, the result of a shotgun going off while he was cleaning it).

Hemingway remains one of Sun Valley’s favourite sons, and each September the Ketchum community library conducts an Ernest Hemingway Festival.

If you stay in the Hemingway suite, you’ll be surrounded by photos of the great writer, as well as a bronze statue of him typing. The suite is the lap of alpine luxury. It has a living room, a sitting room, a study, a granite entrance area and a bedroom with king bed. There’s also a cosy fireplace. 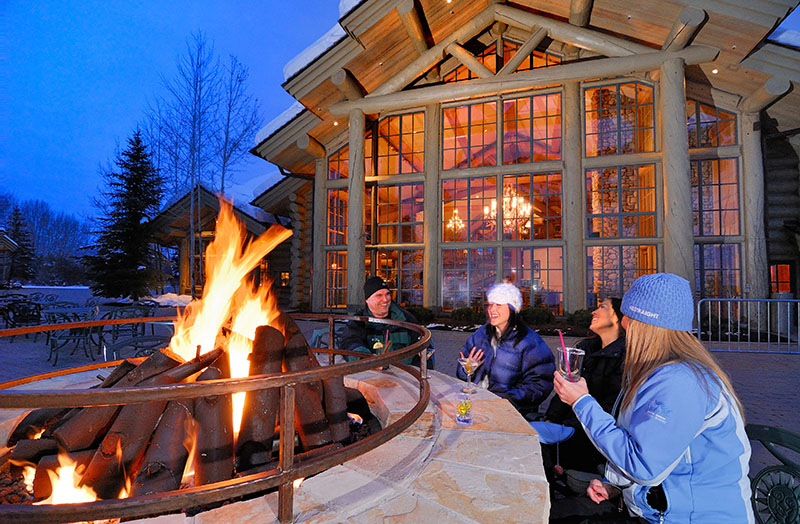 The skiing at Sun Valley is spread over two areas, Dollar Mountain and Bald Mountain, easily accessed by a free five-minute shuttle bus ride. Dollar Mountain is for beginners, while Baldy (as it’s affectionately nicknamed) has the whole gamut – from beginner to expert – with 100 runs including wide groomers, glades and adventure trails for kids.

The first thing you notice at Baldy is the constant pitch. It’s almost like you have to apply the brakes to stop anywhere, because there are very few, if any, flat spots.

Sun Valley, which had the first chairlift in the world in 1936, has 18 lifts these days. That’s peanuts compared with Whistler’s 37 lifts or Vail’s 31, but it all works well and there are hardly any lift queues.

The Baldy slopes often feel empty and it’s not unusual to find afternoon corduroy. According to the Sun Valley resort, the uphill lift capacity on Bald Mountain is 21,580 skiers per hour, but it averages only 3,500 skiers per day. 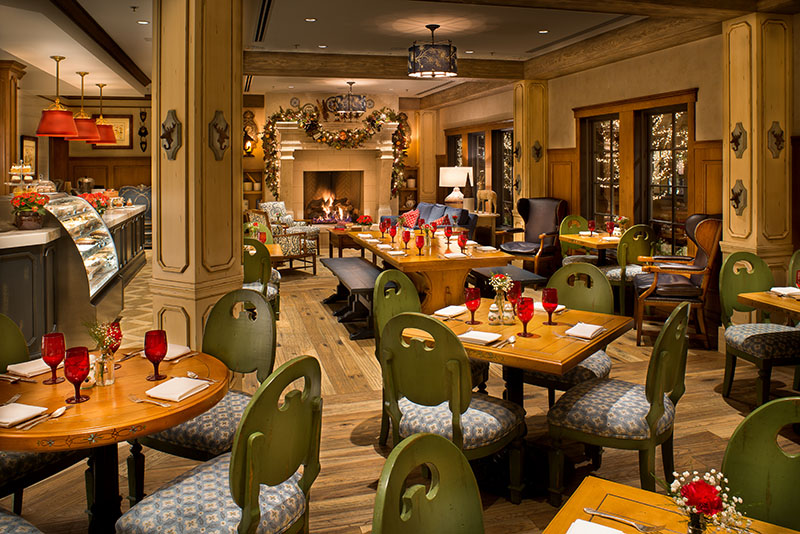 This means you can let your skis go on classic runs such as Warm Springs, nominated by Sun Valley’s general manager, Tim Silva, as his favourite. Warm Springs has been described by America’s Men’s Journal magazine as a “two-mile-long top-to-bottom screamer that charges straight through a natural gully with banked sidewalls”.

The prolific and wisecracking ski filmmaker, Warren Miller, knows it well. As a ski bum making his first films, he lived in a carpark in a teardrop trailer at the base of the run.

“After travelling the world of ski resorts with my camera and a rucksack for 50 years, I still think Baldy is one of the best places to turn right and left,” Miller once remarked.

If Miller points his skis down Baldy in 2018/2019, he may be even more impressed. After this winter, the resort plans to build a new lift that will increase skiable terrain from 830 to 985 hectares. The new lift will be a quad detachable to replace the 46-year-old Cold Springs double chairlift, which is the oldest still operating at the resort. 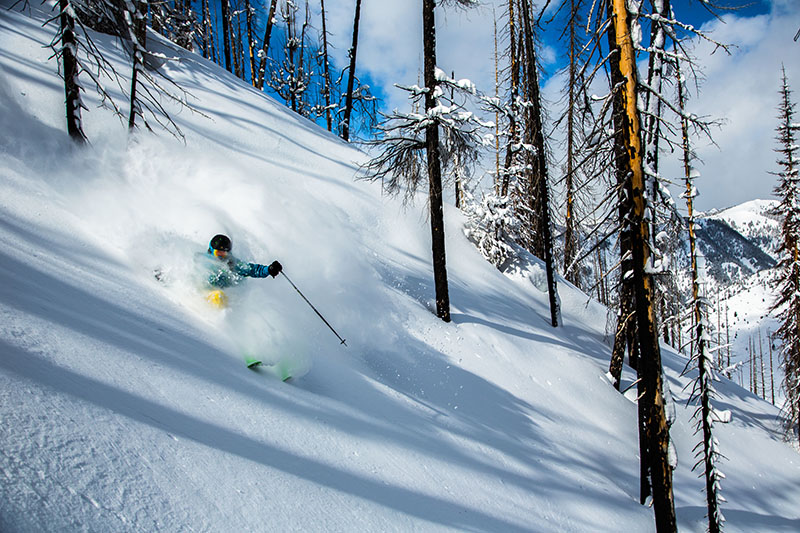 A novel way for strong skiers to see Bald Mountain in all its morning glory is to sign up for the ‘Ski Patrol 101’ program. Each weekend, just two skiers are selected to attend the ski patrol team meeting and then to go out on patrol before the mountain opens to the public.

There’s a similar program, called ‘Ride The Beast’, that allows a few people each week to ride the resort’s biggest snowcat while it’s on night-time snow grooming duties.

Bald Mountain has a handful of grand day lodges where, in the best American alpine tradition, you can rest weary ski legs in Western log-cabin style next to large open fires with a juicy gourmet burger, wood-fired pizzas, or better.

For the start of the day, the River Run Lodge, at the base of the mountain, is the ideal place to buckle up your boots over a coffee. This timber and stone building is nothing less than spectacular. It has soaring ceilings, floor-to-ceiling windows and a sunny patio that beckons for a lunchtime return. Alternatively, the Seattle Ridge day lodge up the mountain is hard to beat for views.

Across at Dollar Mountain, there is ample beginner terrain (22 runs) serviced by five lifts, including a carpet lift for first timers. The treeless mountain also has a terrain park with 76 rails; a superpipe that the resort says is the biggest in the US, and a day lodge at its base. 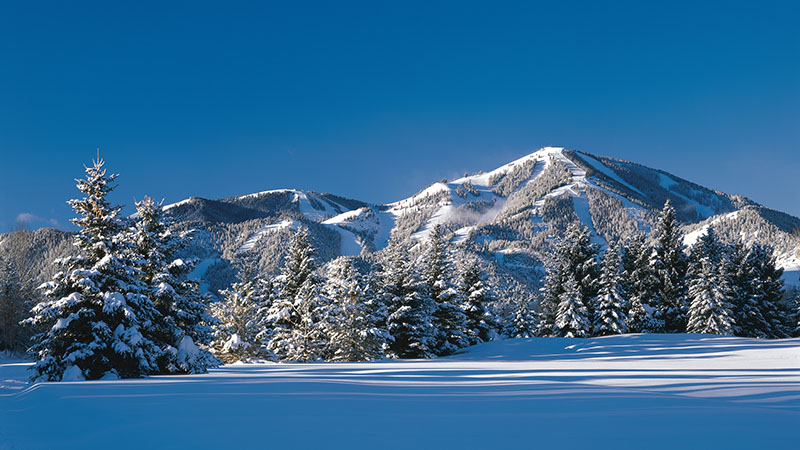 Kids won’t feel left out at Sun Valley. There are sleigh rides (including a dinner ride to Trail Creek Cabin), snowshoe excursions, cross-country skiing, ice skating at an outdoor rink in front of Sun Valley Lodge, and a retro six-lane bowling alley, with arcade games, inside the lodge. Local ice hockey games also provide good entertainment, or head to the resort’s Roundhouse for cheesy fondue.

And whatever happened to Count Schaffgotsch, the man who found the perfect ski resort site?

After enjoying the first few seasons at Sun Valley and being photographed with the starlets, he was caught up in the war during a trip to Europe. The Count ended up fighting for the German Waffen-SS on the Russian front, where he was killed in 1942. • 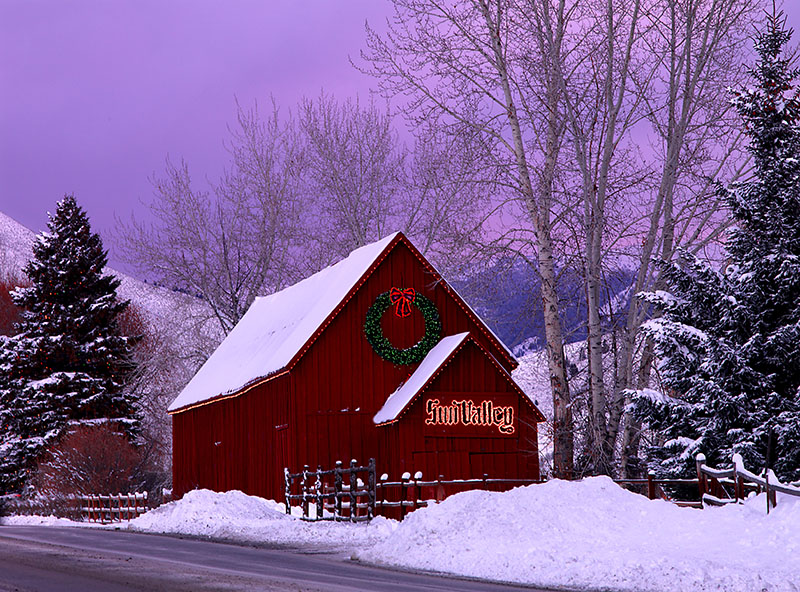 Fly to Los Angeles with one of the major carriers (such as Qantas, Virgin Australia, United and Delta), then connect to Friedman Memorial Airport in the small town of Hailey, which is 22 kilometres from the resort. Alaska Airlines and Delta regularly make the two-hour fight between LA and Hailey. If you are already skiing in Utah or Colorado (where most Aussies go), there are also flights from Salt Lake City with Delta and with United from Denver. Free shuttles are available from Hailey airport for Sun Valley resort guests.
• alaskaair.com, delta.com, united.com

Lay of the land
There are two ski areas, Bald Mountain and Dollar Mountain. In between is the resort village, including Sun Valley Lodge. There is no ski in and ski out accommodation, but free shuttles take skiers to the nearby slopes. There are day lodges at, or on, each mountain. Shuttles also run into the Old West town of Ketchum, which is about three kilometres away and has most accommodation, restaurants and bars.

Where to stay
• The Sun Valley Lodge has charm, style and history and a new wow factor thanks to its renovation. sunvalley.com
• The Limelight Hotel (there’s one in Aspen too) is edgy, affordable and for the young crowd. It was the first new hotel in Sun Valley in 20 years when it opened in Ketchum in late 2016. limelighthotels.com
• The Knob Hill Inn is a boutique property in Ketchum with European ski chalet ambience. knobhillinn.com

Where to eat in Ketchum
• The Warfield Distillery & Brewery is a gastro-pub where you can partake in local beers such as Big Plough, spirits including gin and vodka, and a modern menu featuring octopus, pheasant breast and Hokkaido scallops. warfielddistillery.com
• Step into the Wild West at the cosy Pioneer Saloon, a Sun Valley icon where steaks and ribs rule. pioneersaloon.com
• The Enoteca restaurant and wine bar, operated by the owners of the acclaimed Ketchum Grill, has wood-fire pizzas and Idaho trout on its menu. ketchum-enoteca.com
• For modern-day celeb spotting, book a breakfast, brunch or lunch table at the stylish Italian, Cristina’s. cristinasofsunvalley.com