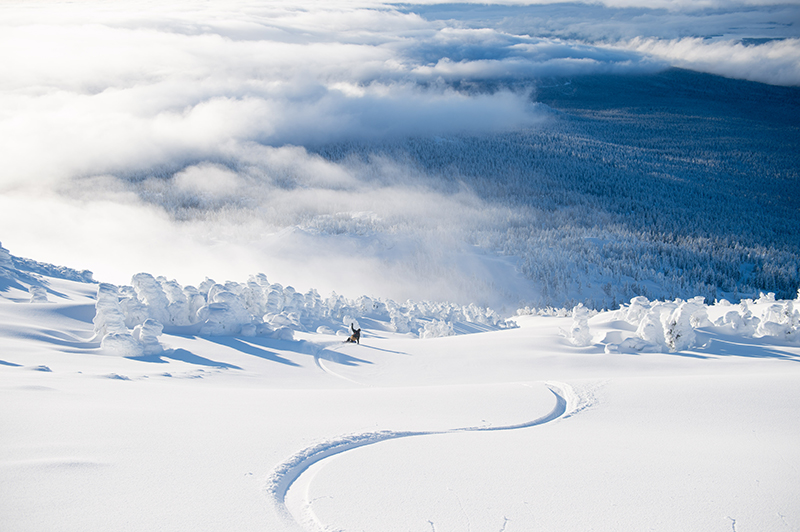 Sandwiched between California to the south and Washington in the north, this pretty all-American Pacific Northwest state hardly registered a blip in Australians’ ski travel plans until a few years ago.

Thanks, however, to having easily accessible resorts offering world-class terrain, with some of the longest ski seasons and most reliable snow in the world, combined with burgeoning food, coffee and craft brewery scenes state-wide, Oregon is emerging as a serious contender for our overseas ski dollar.

Proximity is a big draw card, as those who live in Portland, Oregon’s largest city, know. Within a four-hour radius of their front doors are several excellent ski fields, all nestled neatly within the Cascade Range slicing north-south through the state. 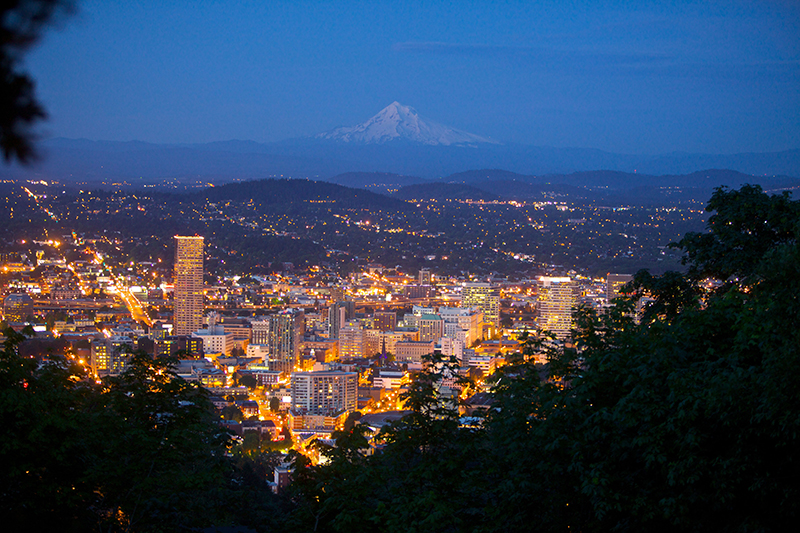 In a little over 90 minutes from Portland’s city centre, you can be clicking into your bindings at either Timberline or Mt. Hood Meadows ski fields on the flanks of Mt. Hood, or be night skiing at Mt. Hood Ski Bowl.Drive just three and a half hours south of Portland, and be at Mt. Bachelor, the sixth largest ski resort in the United States following the addition of a new quad chairlift called Cloudchaser this past season.

Venture a few hours further south to find Cat Ski Mt. Bailey at Diamond Lake Resort, one of the longest running cat skiing operations in North America. We warmed up here before heading to Mt. Bachelor, experiencing a day of thigh to waist deep powder and superb conditions. We could not have had a better introduction to skiing in Oregon, and were keener than ever to see what else its mountains were hiding.

When we arrived at Mt. Bachelor in February this year, the mountain was experiencing one of its classic storm systems that periodically make skiing from the 2,750 metre summit impossible due to high winds and low visibility. 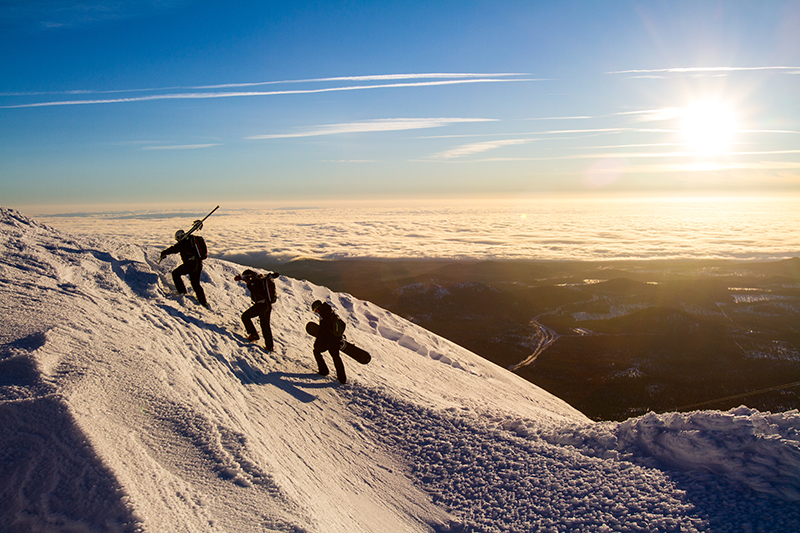 The beauty of Mt. Bachelor though is that, being an extinct volcanic cone, it is one of the few resorts where skiing is possible 360 degrees from the summit.

Combined with many protected tree runs, this ability to choose the full range of aspects means there is always somewhere to ski. We made run after run in virtually fresh power off the Red Chair and Outback Express, our tracks being filled in by the time we came back around. It was pure bliss.

Skiing Mt. Bachelor is like skiing in your own snowy wilderness, surrounded by trees and powder-filled big-mountain terrain, safe in the knowledge that civilisation and a hot meal lie just metres below. 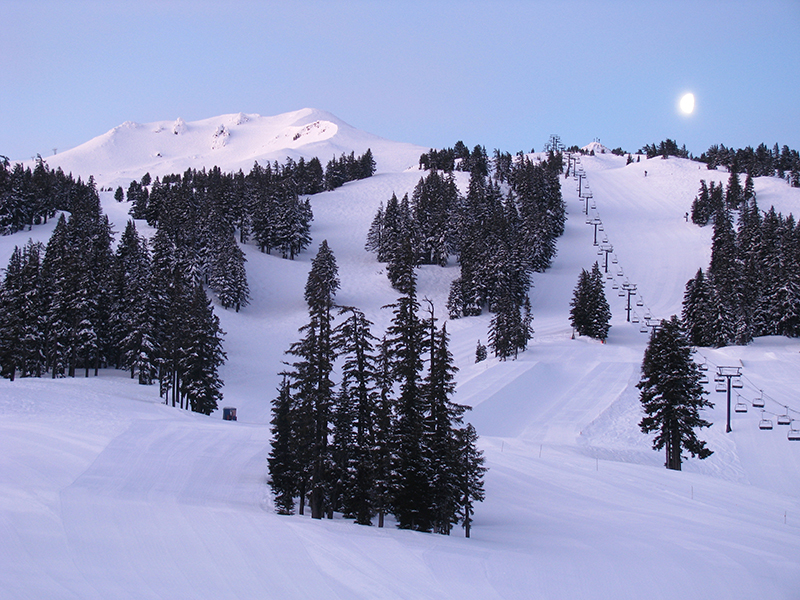 The next day, those who were lucky enough to stay, experienced bluebird skies and fresh powder turns right from Mt. Bachelor’s summit, as well as the additional terrain accessible from the new Cloudchaser lift. This high-speed lift opened another 255 hectares of skiable terrain (about half the size of Thredbo to put it into perspective) across 13 new runs, bringing Mt. Bachelor’s size to 1,750 hectares.

In total, almost 14.5 metres of snow fell on Mt. Bachelor last season, one of the largest accumulations in its 58-year history of operation.

The town of Bend, 35 kilometres away, is where most Mt. Bachelor skiers and riders stay. There’s so much to do and see here it is worth leaving the slopes a little early to come back and explore. 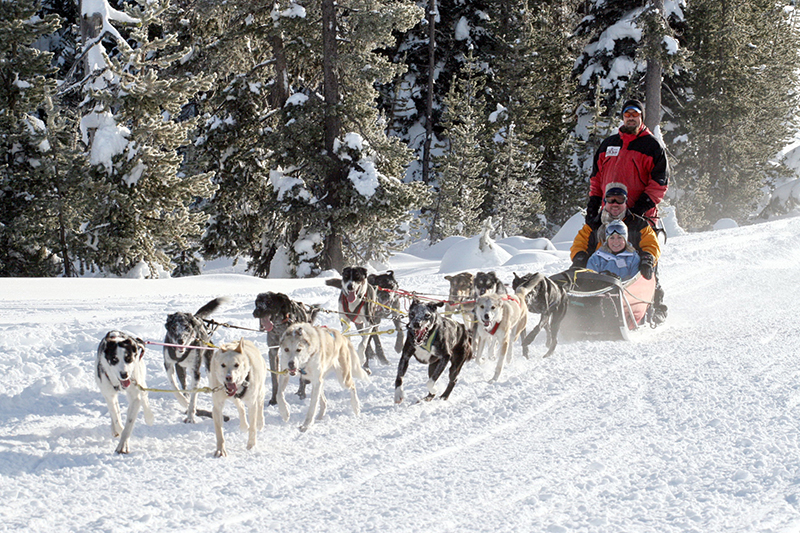 Artistic quirks are found everywhere from the abstract sculptures placed in the centre of every roundabout in town, to the whimsical McMenamins Old St Francis School Hotel, a 1936 renovated Catholic school decorated to the hilt with the furnishings and fittings of yesteryear. Every room is different, broom closet doors hide cosy little bars and false walls give way to reveal secret rooms filled with art.

Bend is also famous for craft beer, the “Brewvolution” starting when the famous Deschutes Brewery opened in 1988. There are now 26 breweries in Bend according to the Oregon Brewers Guild, the most of any Oregon town outside of Portland (70 breweries and rising).

Shop and dine at the rejuvenated Old Mill District, once home to the two largest pine lumber mills in the world, and if you’re fortunate enough, your visit may coincide with a major performance at the Les Schwab Amphitheatre which has hosted the likes of performers Jack Johnson and Dave Matthews Band. 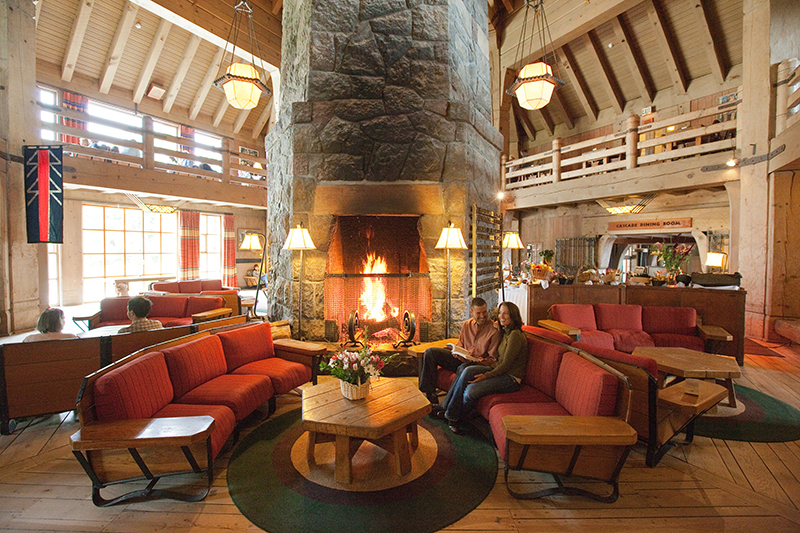 We could have spent many days here but several other ski resorts on the flanks of Mt. Hood further north were calling. From Bend, we drove up along Highway 97, through spectacular landscapes of wide, open plains, the horizon punctuated occasionally by one of the many snow-covered peaks of extinct volcanoes that form part of the Pacific Rim of Fire.

By early afternoon, we were literally driving up the side of one of these famous extinct volcanoes, Mt. Hood, and parking in front of the large and imposing Timberline Lodge while fresh snow fell around us. 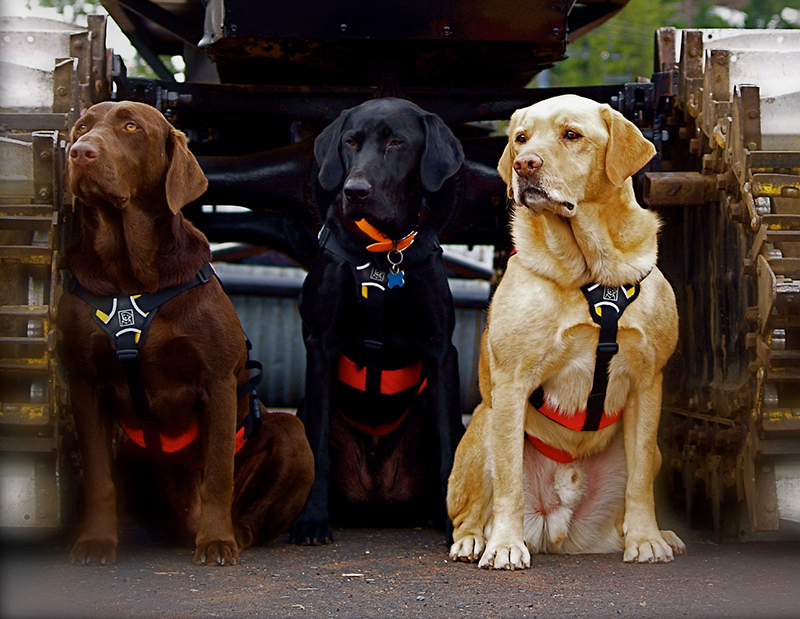 Timberline is famous for several reasons, principally because it is the only ski area in North America open 12 months of the year. It also offers 1,125 vertical metres of skiing, more than any other ski field in the Pacific Northwest. If you have a dozen or more friends with a taste for something different, you can book into Silcox Cabin, which at 2,130 metres is Oregon’s highest on-snow accommodation. Here you can ski straight out your front door onto the slopes of Timberline after your chef-cooked buffet breakfast.

The grand 1936-built Timberline Lodge, sitting a little lower at 1,820 metres, is one of a select group of hotels deemed National Historic Landmarks. The lodge was constructed by dozens of craftsmen as part of former President Roosevelt’s Works Progress Administration program to get people working again after the Great Depression. As a result it is an architectural and creative masterpiece, filled with superb examples of masonry, ironwork and carpentry. In fact its gothic façade is so distinctive, it was chosen to depict the fictional Overlook Hotel in 1980’s horror film The Shining starring Jack Nicholson. (Internal scenes were shot in a studio, not in the hotel as many believe). Even if you don’t choose to stay here, do try to book into Timberline Lodge’s rustic Cascade Dining Room for delectable cuisine including organic lamb roasts. 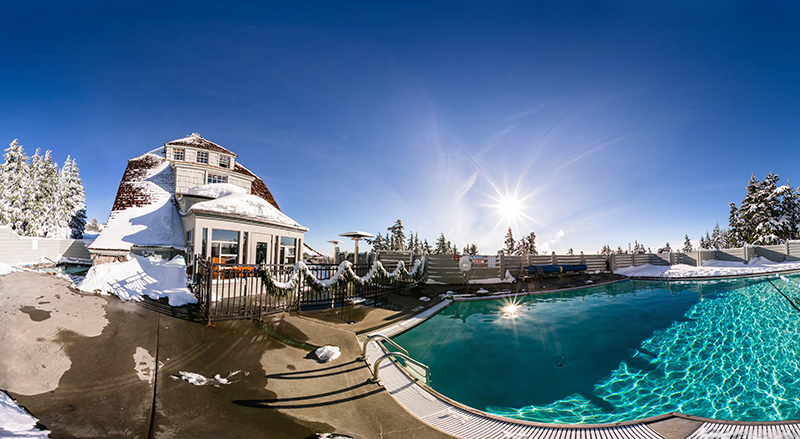 About 40 minutes drive from Timberline is Mt. Hood Meadows ski field. Like Timberline, Mt. Hood Meadows offers many intermediate and beginner slopes, but far more in the way of challenging double black diamond terrain making it a must-visit for any advanced to expert skier.

This terrain is mainly found within two canyons, Heather and Clark, below an area named Super Bowl. All are marked double black diamond and accessed through gates only. Here we came across waterfalls, creeks, tight trees and cliffs – most of which is unmarked. We loved it, and were impressed by the fact that the resort offers just as much in the way of easier terrain from at least five other modern lifts emanating from the expansive main day lodge. 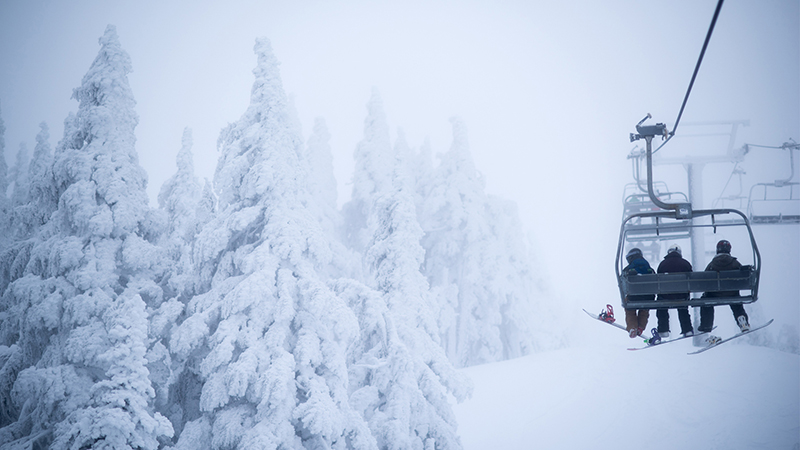 Mt. Hood Ski Bowl is also located nearby opposite Government Camp, a settlement of hotels and restaurants that offer alternative accommodation to Timberline Lodge. This area’s claim to fame is its night skiing operation, the largest of its kind in the United States.

When we regretfully had to leave, our departure was made all the easier by knowing that it was well under two hours to Portland’s airport. Rarely do you find world-class skiing so close to a major centre and so easy to reach. The only word of warning would be to ensure your hire car has snow tyres, imperative for navigating one of the snowiest places we have ever visited.  •

Getting there
Fly American Airlines to Los Angeles then connect on an hour-long domestic flight to Portland International Airport, Stay a night or two in Portland and take in a Third Wave Coffee Tour to learn about Portland’s pioneer micro-roasters while visiting cafes and eateries around the trendy South East Division. americanairlines.com.au