What do a Komodo dragon, hammerhead shark and crocodile have in common? Other than being very dangerous, they’re all part of the adventure on a Bali to Broome Silversea Expedition.

Compared to the new superliners, where you can get lost on board, our cruise was an intimate experience with 96 crew and 120 fellow guests quickly becoming friends, following daily off-ship adventures and open-seat dining. Not surprisingly, the action and sociability of expedition cruising was infectious. Rest assured, if you prefer privacy, there’s plenty of seating options, including 24-hour in-suite menus.

Today, small luxury passenger ships regularly access remote, pristine locations, previously visited by basic ships or the most independent of private adventurers. Luxury in these far-flung destinations was not thought feasible by cruise lines. Silversea Cruises, Italian-based and internationally-acclaimed for their impeccable style and unrivalled offerings, were the first to jump into these new waters. 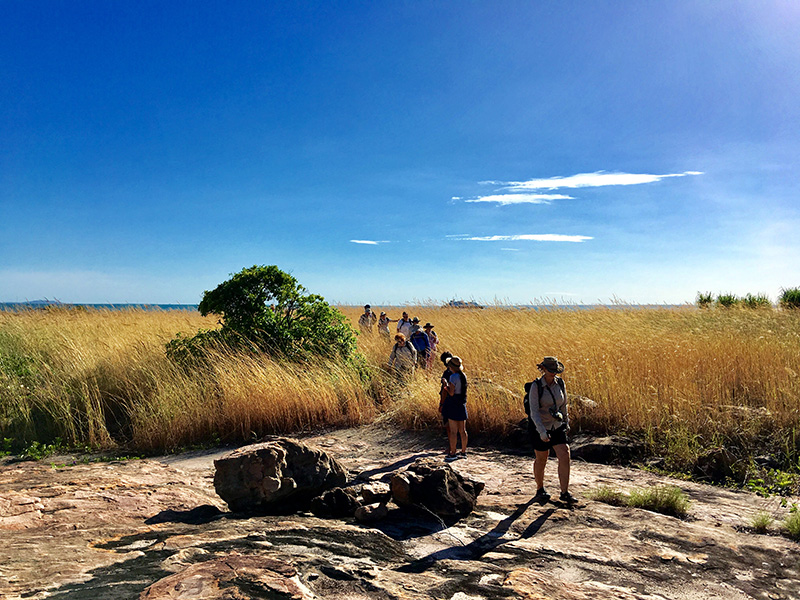 Our 10-day journey managed to blend zodiac action, endless adventure and extreme comfort with signature Silversea style and elegance. Toss into the equation fine cuisine, wine and exceptional service, then possibly heaven is a place on earth, or at least afloat.

With the help of large zodiacs and expert adventure specialist crew, Komodo dragons, polar bears, Galapagos iguanas and remote inaccessible tribes are now captured by the lenses of enthralled passengers. The luxurious offerings were already part of their experience so it wasn’t such a leap of faith from their acclaimed larger vessels to smaller ships, allowing access to places bigger ships cannot get to.

Our 10-day cruise started in the Balinese port of Benoa, with our personal butler unpacking the luggage in our sizeable suite with private balcony. Following the obligatory safety briefing, we became acquainted with fellow passengers, the Silver Discoverer’s crew and on board facilities. 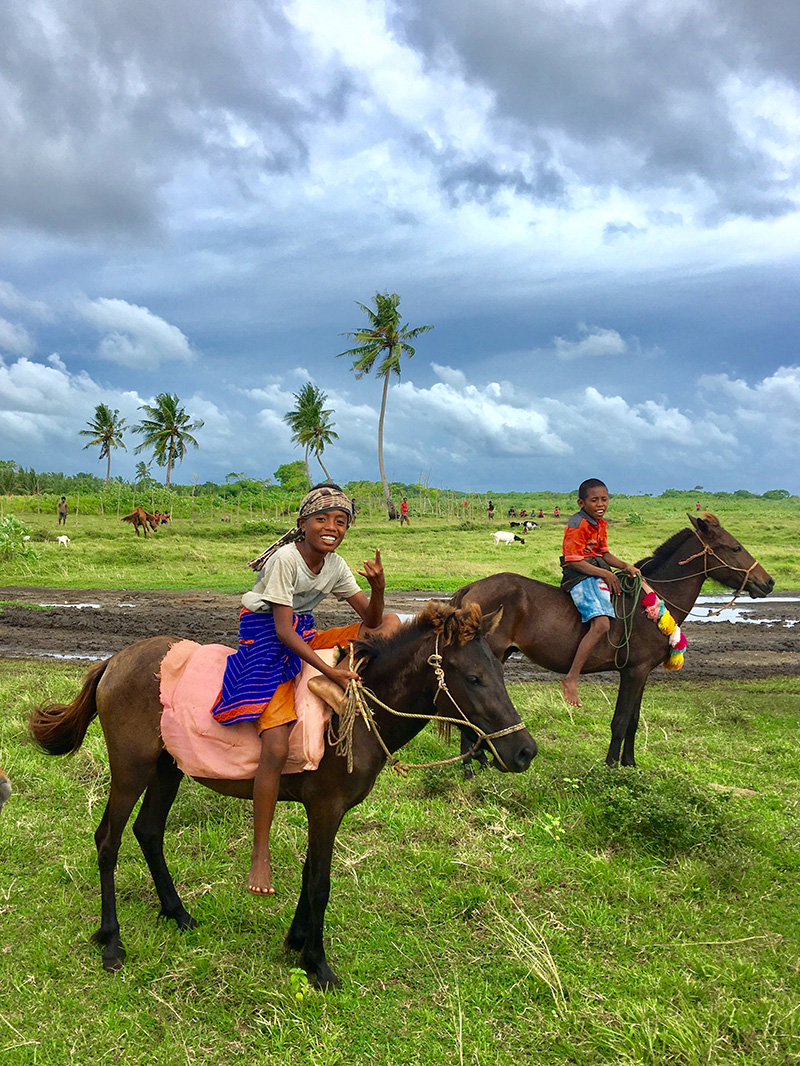 After drinks and the first of 10 spectacular sunsets, we retired early, enjoying a four-course dinner and wines in the convenience of our suite. We woke to find we had arrived at the first of our Indonesian destinations, Sumba of the Lesser Sunda Island group, which also includes Bali.

Our next port of call, Komodo Island, is home to the world’s most infamous inhabitant, the Komodo dragon. As the largest monitor lizard alive today, it certainly lives up to its fierce reputation. We were personally escorted by Komodo National Park rangers, armed with large sticks, into the interior of the island where local dragons lazed in the sunshine. Although active and ferocious when hungry, it was no accident these guys were well fed for our protection. 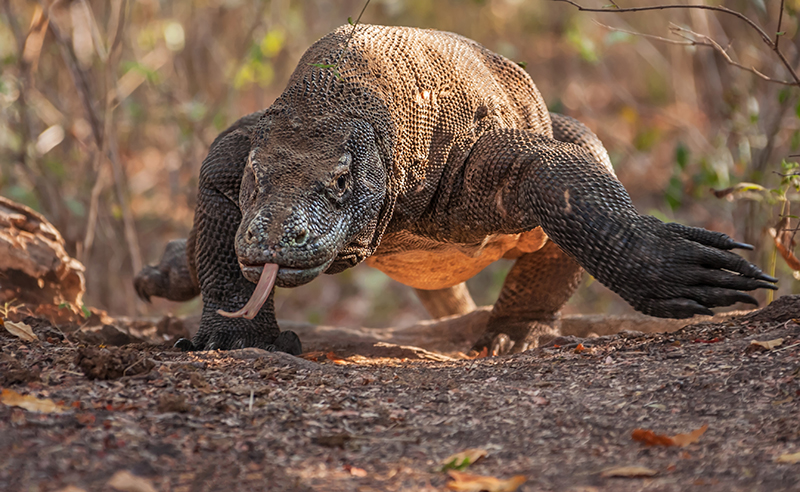 The ship repositioned that afternoon at Pink Beach, famed by its speckled red coral sands, where we enjoyed spectacular snorkelling followed by cocktails on the beach. Komodo is a large island of rolling volcanic hills of green grassland, lowland scrub and jungle in a sleepy part of the world and a feeling that time has forgotten with such primitive inhabitants.

The cultural highlight of our Indonesian itinerary was on Savu Island and our exclusive display of Pasola fighting by local Sumbanese men, in traditional costumes. Set within an arena of green pasture, these proud testosterone-infused sportsmen and their prancing colourfully adorned ponies were full of vanity in front of our lenses, eager to show off their spear throwing abilities as their horses sprinted to and fro.

Leaving Indonesian waters, we spent a day and night crossing the Timor Sea, en-route to the much anticipated Kimberley Coast of Western Australia. Our sense of escapism and isolation from the rest of the world was now complete, having arrived at dawn in the remote sleepy port of Wyndham, gateway to Kununurra, Lake Argyle and the 350-million-year old Bungle Bungle mountain range.

Guests had two options that day, either a river cruise or a complimentary scenic flight. We chose the latter, flying from Kununurra over the enormous turquoise Lake Argyle and lush rolling Kimberley escarpments meeting the unique and ancient red and black stacked rock formations of the Bungle Bungles, only discovered in 1983. This is no surprise given the Kimberley is the size of Victoria and is the most remote location in Australia. 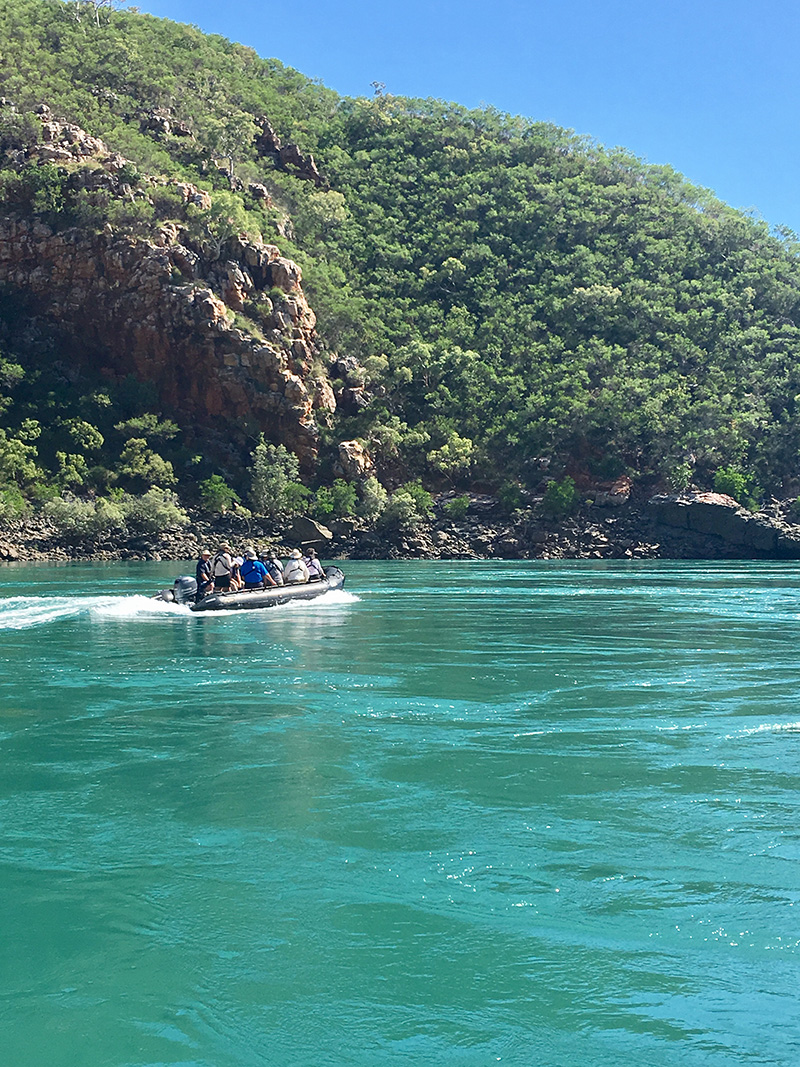 Seven days into the cruise and amongst new friends, returning to the ship each day we enjoyed expert on-board lectures, cocktails at evening briefings and the highlight of the day’s sightseeing, followed by detailed information of the next day’s activities. Private dinners were then enjoyed around the pool deck as a cool sea breeze brought respite from the tropical evening air. Meanwhile, almost unnoticed the ship slipped into the night drawing us closer to the next day’s adventure.

The jewel in the Kimberley’s crown is the King George River and Falls. Luckily, we were early in the season following a record wet season, and a thunderous spectacle over twin cascading falls left passengers wet and speechless. Before arriving, our zodiacs zipped up the river as we marvelled at red sandstone escarpments, lush foliage of inlets and mangrove swamps, and a close encounter with a nonchalant lazy crocodile. 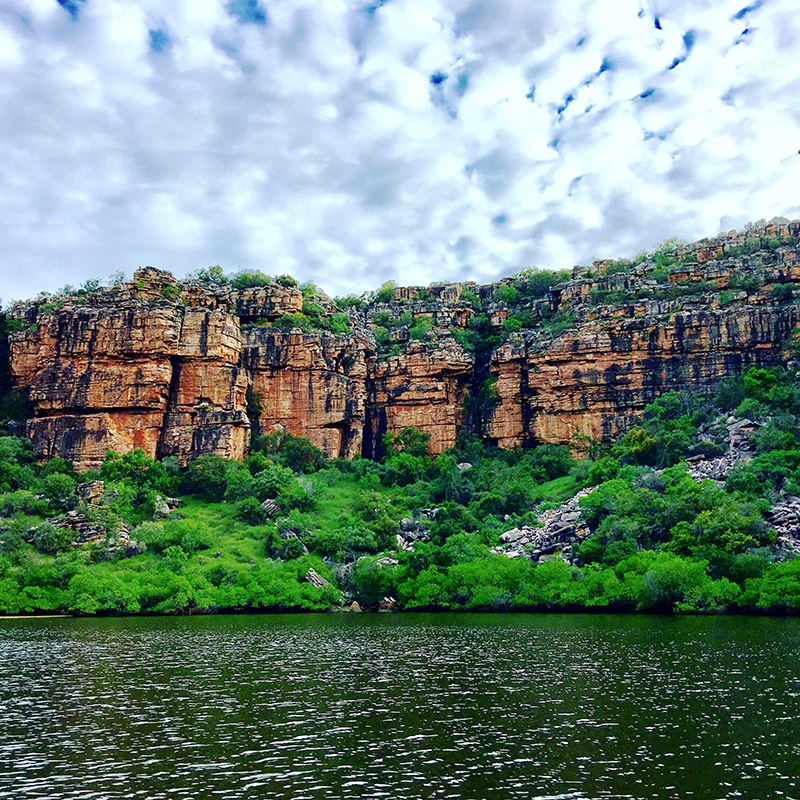 This ancient and remote part of the world leaves an indelible mark on your psyche. While soaking up primitive landscapes and soaring red rock formations, it’s easy to understand the Aboriginal spirituality and dreamtime stories inspired by ancestors over the centuries. The following day we landed on the beach of Vansittart Bay where our two-hour fascinating bush walk took in Gwion Gwion Indigenous rock art, juxtaposed by a visit to a crash-landed USA C-53 WWII war plane, still in good condition.

After each day’s zodiac adventures, I couldn’t imagine the next day would be as unique and exciting as the previous. Remarkably, every day did just that as sunrise on day nine took us to the vastness of the surrounding estuaries and bays of the Hunter River and its stunning mangrove coastline. Our early morning excursion revealed a parade of wildlife, passing a lazy crocodile, pairs of feeding manta rays leaping from the water and jumping mullet skimming the surface around us. Watchful of wading birds, mud skippers were busy attending to their day before the tide returned. Kingfishers busied themselves, twittering within the mangroves and from above we watched a pair of busy ospreys attending to their nest on the glowing red face of the escarpment. Our expedition leader then cut the engine and let us drift for 20 minutes in silence, as we soaked up the uninterrupted ambience of this phenomenal wilderness. 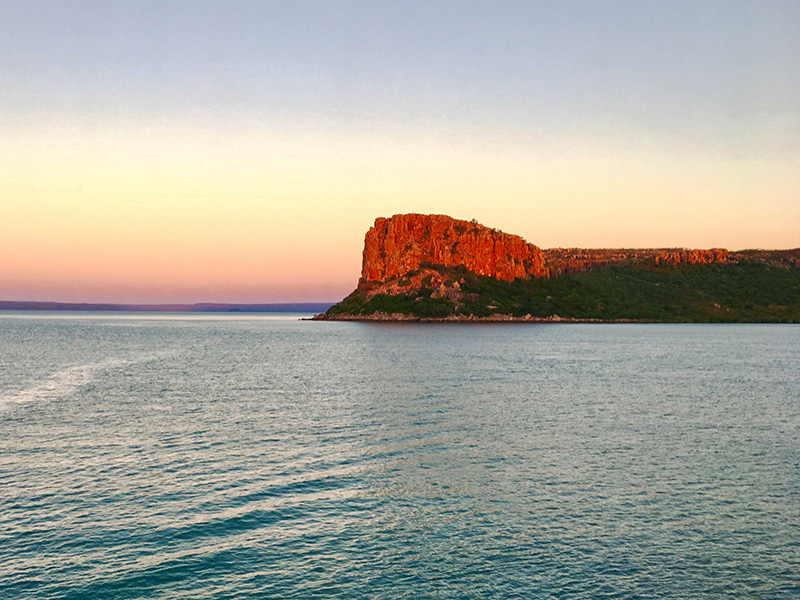 Later that morning, our zodiac dropped us on a beach with awaiting helicopters, whisking us away deep into the interior of the Mitchell Plateau, with the Mitchell River and famous four-tiered waterfalls with surrounding deep pools. Here, we alighted and swam, least concerned by the freshwater crocodiles, who apparently, or at least on our occasion, didn’t bite. A short walk later and we stood above the plunging mass of water and looked down to the home of the dreamtime rainbow serpent, glistening in the mist beneath the falls.

Returning to the ship’s deck for lunch, where daily fresh pasta was prepared by one of our Italian chefs, we indulged with another fine wine as the afternoon colours danced over the surrounding landscape. Still at anchor in glassy turquoise water, much to the delight of well fed passengers, several large, curious sharks meandered around the ship.

Arising early the next morning, our zodiac zipped us off again; this time we marvelled at the falling tide and cascading rivers flowing off Montgomery Reef. Within an hour this colossal 400-square-kilometre coral plateau mass, appeared to just rise from the ocean. Fish, turtles and wading birds all took advantage of the tidal offering, busily sustaining themselves until the tide returned. 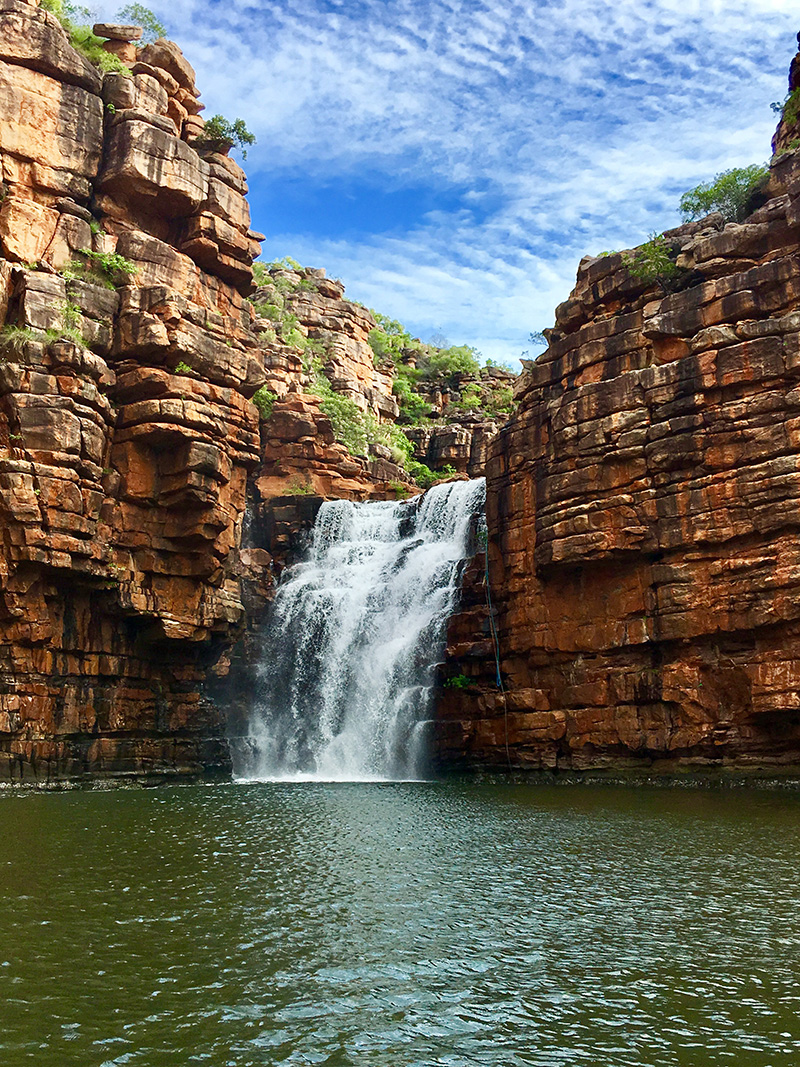 It’s no secret luxury cruising like we experienced can be a little hazardous to the waist line. Fortunately today’s Silversea passenger is offered a healthy portion and calorie advice is listed on their gourmet menus. If you want to let loose after a healthy lunch, ‘High Tea’ is held daily and will surely tide you over until yet another delicious dinner.

Time flies when you’re having fun and before we knew it, our cruise was drawing to an end with Broome our final port of call.

In between the incredible experiences we had along the way, from the jaw-dropping scenery, to the wildlife – snappy or otherwise – and the cultural knowledge we picked up, we enjoyed hours of lazy conversation and camaraderie with new international friends. It is a pace of life far from our everyday pressures, spending time reading, watching in-suite movies in the afternoon, having a siesta, or just staring happily off to a distant horizon. 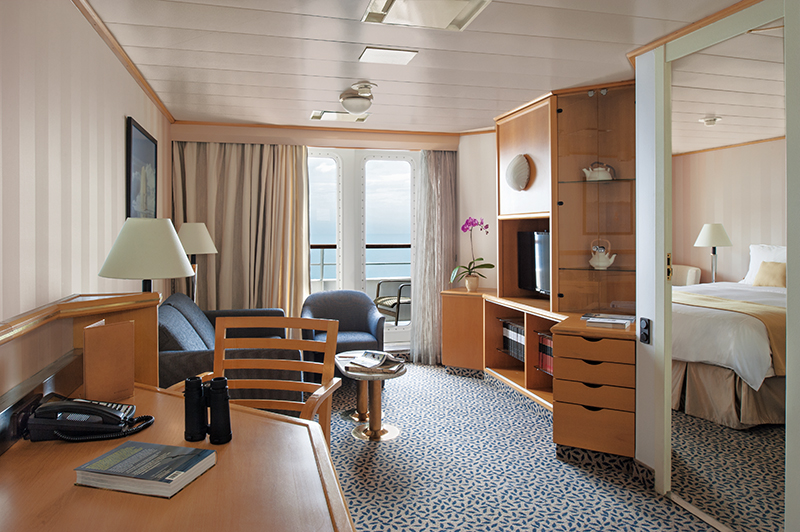 Weeks later, the journey we took still sits high in our memories. An afternoon thunderstorm took us straight back to the Timor Sea crossing, standing on the balcony watching as a crazy lightning storm slammed and sizzled into the ocean, charging the air with not only electricity but that feeling that you are witnessing something incredibly special.

And we had front row seats. • 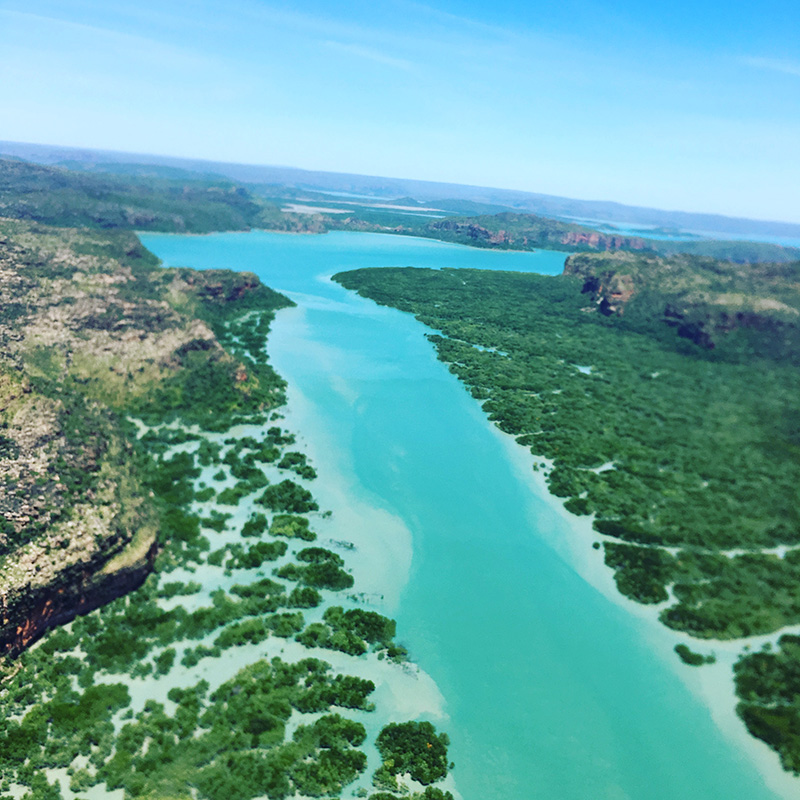