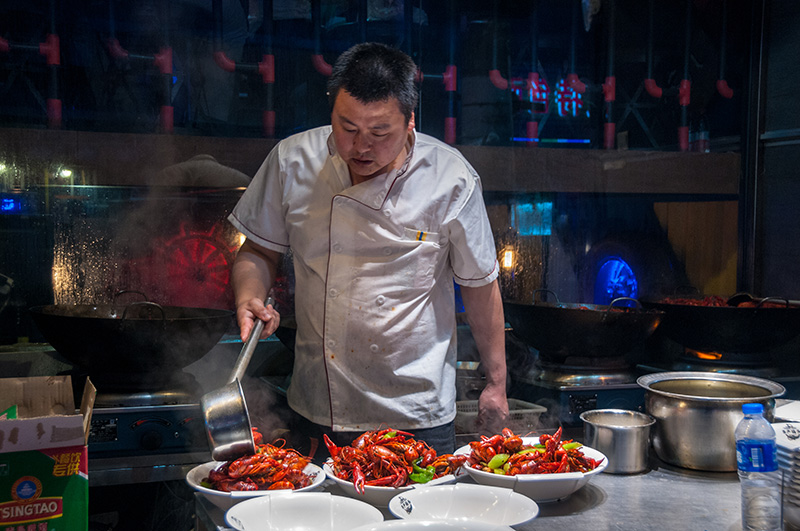 Forget the Michelin-starred chefs and international cuisine laying siege to the city, steer a path past restaurants with food from provinces in the far-flung corners of China to eat what the Shanghainese grew up on.

“Shanghai food can be summarised by four characters: nong you chi jiang [thick oil strong sauce]”, says Shen Jianming. I admit that doesn’t sound the most appetising combination, and done badly it isn’t. Get it right, as chef Shen does at the Jianguo 328 restaurant, and it can transport you to food heaven.

Most tourists coming to Shanghai know about the soup dumplings but they know about the wrong ones. Forget your daintily wrapped xiao long bao – this is not the type people eat everyday. It’s sheng jian bao that powers the average working man or woman and they are a proper meal. About three or four times the size of xiao long bao, they have a thicker skin and because they are cooked in a skillet, have a crunchy base. Yang’s Dumpling is a tourist-friendly chain with many locations around the city. The original pork sheng jian bao are the best of the four types available at Yang’s and ordering is relatively easy thanks to an English menu. 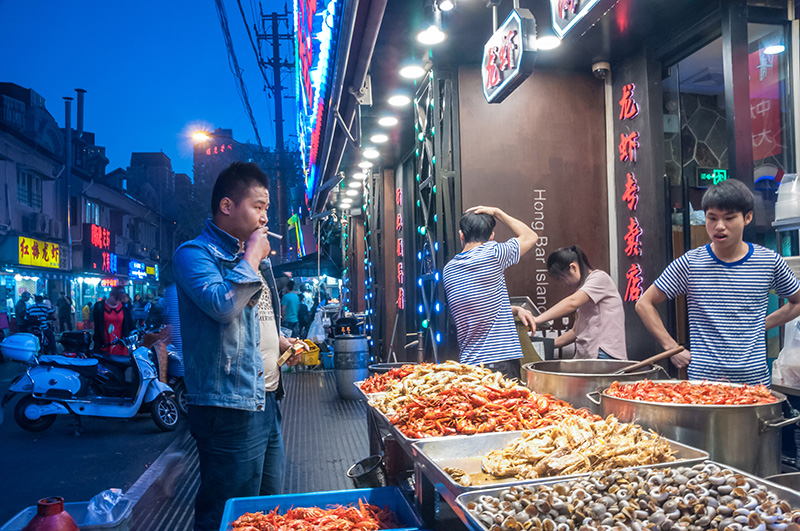 However, for those wanting a more authentic experience, head to Da Hu Chun where the chain store lashings are eschewed for a stone floor and wooden tables. Here the locals are friendlier, giving you a nod that you are in the know. You’ll have to make do with the Chinese picture menu on the wall above the counter. Order the pork and prawn sheng jian bao (12 Yuan – about $2.30 – for four) and wash them down with a beef curry soup. The combination of the prawn and pork elevate the dumplings to another level and while the soup inside is quite sweet – a Shanghai-style food characteristic – it is not overpowering unlike many of the ones sold on street corners. Beef curry soup may seem an odd dish for China but it is supposedly a carryover from the days when the British used Sikh policemen in their part of the city during colonial times.

Perhaps the reason that Shanghai has never produced any great philosophers is that they spent too much time debating the merits of various xiao long bao. A word of warning, the famous Nanxiang restaurant in the Yu Gardens (old town) area is little more than a tourist trap. While it is a nice traditional looking building, both the service experience and the dumplings themselves will leave you sorely disappointed. With some of the best soup dumplings and service in town, Din Tai Fung is a safe bet. However, as an international chain, originating from Taiwan, it has a rather sterile shopping mallesque feel. 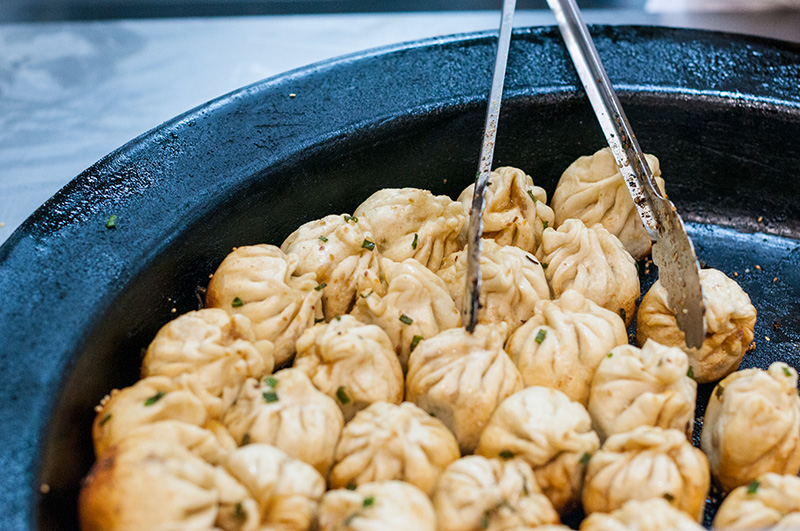 When you see the line of people out the door, you know you’ve found Jia Jia Tang Bao – a great alternative. You’ll likely end up sharing your table at this small local restaurant. While waiting for your dumplings, you can watch the all-female team deftly wrapping the tiny parcels. Though they have six varieties of soup dumplings, they often run out. I tried the pork and crab mixture (30 Yuan – $5.80 for 12), which have a perfect balance of the two with a rich crab tasting soup and skins that are neither too thin as to break easily or too thick as to be difficult to bite. The trick when eating xiao long bao or sheng jian bao is to bite a small hole in the wrapper and then suck out the juice – if you don’t you are likely to launch scalding soup at supersonic speed across the restaurant.
Next, you dip it in vinegar before devouring. The hallmark of any decent xiao long bao place is that the vinegar should come with strips of ginger. At Jia Jia this is confusingly just marked as sauce in English on the menu and, like with most dumpling places, you order and pay at the entrance counter.

Neon lights illuminate Shouning Road and restaurateurs are vying for passing trade when I meet my guide Christopher Brantley from UnTour for their ‘Night Eats’ Tour. We are joined by five Kiwis on a husband-free escape along with a French- Canadian couple. Shanghai has two seasonal food obsessions – crayfish in summer and hairy crabs in autumn. Every restaurant on the street has pretty much the same dishes but it is the yabbies in all states of life and beyond that stand out. Brantley tells me that while we are early in the season – they are at their plumpest from June to August – they are actually available year round and are farmed out near Pudong Airport. 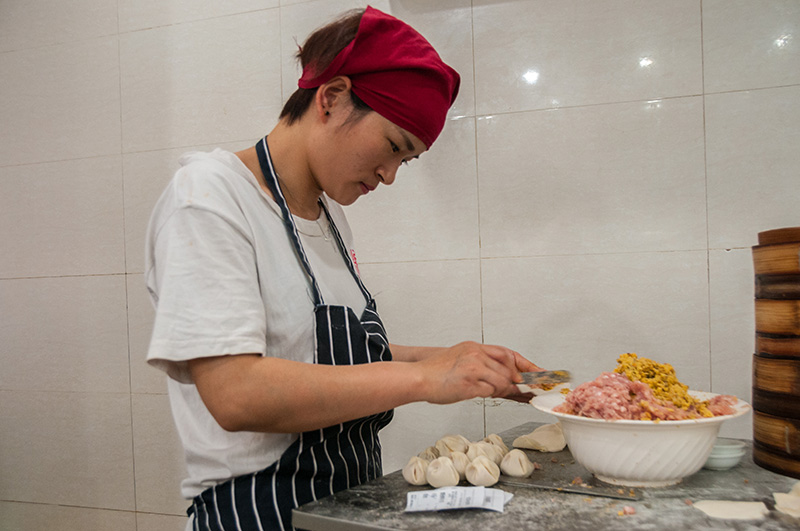 “Can you smell pineapples? All baijiu has this smell” says Brantley about the fiery Chinese alcohol often mistranslated as white wine. I’ve never really noticed the hint of pineapples before but tentatively sniffing now the aroma to me is more of the sickly synthetic flavouring type. We down it to collective gasps about how bad it is but as baijius go this one, from a near spherical brown bottle, is one of the better I’ve tasted.

We dig into yabbies bathed in a mala sauce where the spicy and numbing flavour soon masks the baijiu’s aftertaste. Garlic features heavily in the scallops that arrive next along with the roasted eggplant. The eggplant comes with slices of mantou – Chinese-style bread – toasted over the grill and dusted with a cumin and sugar mixture. Before entering the restaurant, we did a meet and greet with a water snake, which after being deep fried now comes to us dressed in scallions. The meat itself has little taste with instead a sweetness coming from the crisped batter.

“A lot of the night markets have been shut down recently and we had to change the name of our tour from night markets to night eats,” says Jamie Barys, UnTour’s Chief Eating Officer. Shanghai has for the last 10 years been tearing down smaller restaurants and getting rid of street vendors. Barys says that if you do want to try street food, one thing to watch out for is the oil. Those using good oil usually display a large bottle of it. Also, she warns if a place is selling beef for the same price as pork, it is probably not beef. 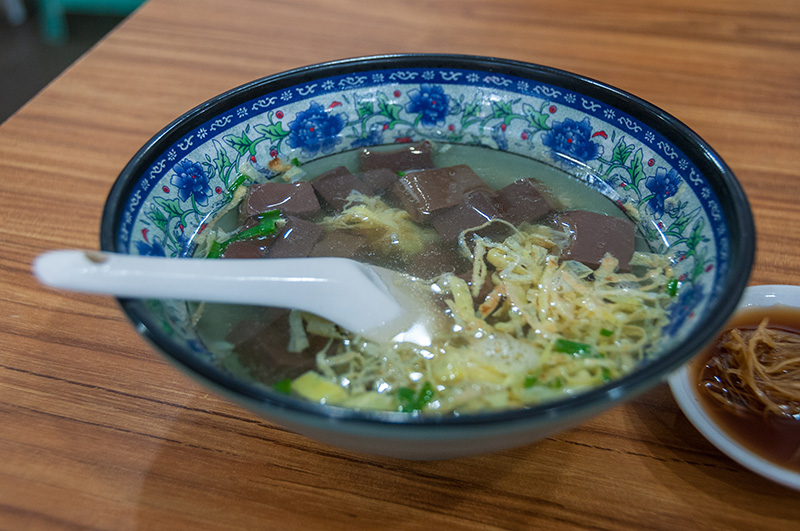 “The great thing about coming to Shanghai as a tourist is that there are so many migrants from all over the country; you can eat your way round the country without ever needing to leave the city. However, one Shanghainese dish that they should try is cod head with scallion oil, in fact anything with scallion oil, this is very typical of Shanghai food”, says Barys. Old Jesse, a tiny but famous restaurant, is renowned for the dish. It has a surprisingly large amount of flesh on it with a moreish buttery softness and a taste infused with scallions. It is best shared as a dish between three or four people.

At Old Jesse I also try the hongshao rou. While a typical Shanghainese food, most restaurants do not cook it long enough – it should be cooked for at least an hour in a sauce that at its most basic is a mixture of yellow wine, dark soy sauce, water and rock sugar. The fatty cubes of pork fall apart in my mouth and there is no oily aftertaste. I help wash it down with Reberg Pilsner, a Shanghai-brewed craft beer.

“I was born in Pudong where Shanghai food originates. We call it benbangcai and it combines the food of Shanghai with Zhejiang and Jiangsu Provinces,” says chef Shen. He recommends I try the pork liver seasoned with soy sauce. The sauce tempers the liver flavour giving a welcome boost of iron. Recently, they’ve started offering a special set menu “Old 8 Dishes”, which is the Shanghai-style feast served to celebrate a daughter’s engagement. Enough to feed more than eight people, it consists of eight appetisers, eight hot dishes and eight mains and includes eight treasure duck – which at this restaurant is a whole duck wrapped in a lotus leaf and stuffed with ingredients such as shiitake mushrooms and gingko nuts and then steamed for 12 hours. This dish requires a lot of work so it’s best to order well in advance. 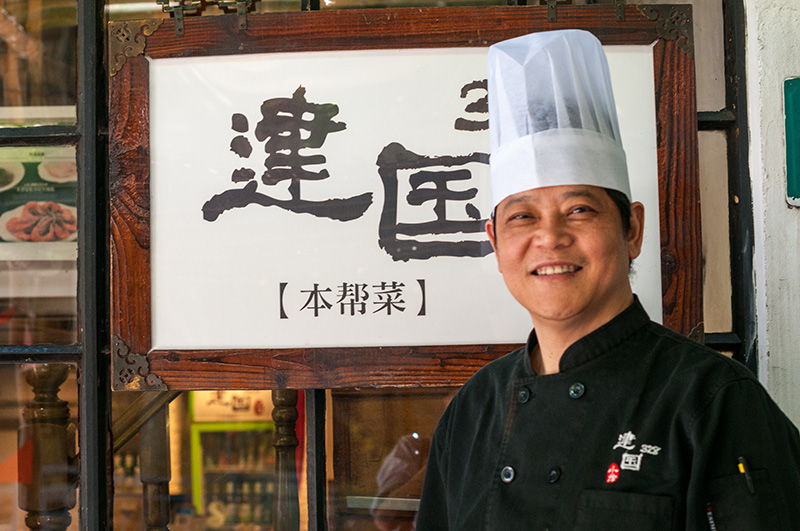 “We are always studying how to improve local Shanghai food, how to innovate it, to make it better,” Shen tells me. It seems that in his hands, and those of various restaurants around the city, the food is very safe and holding its own against better-known Cantonese and Sichuan cuisines. •

When to go
Temperatures are at their most bearable between April and early June and mid September to mid November. Summer is very hot and humid with a lot of rain until late July. Winters are cold but with very little snow.

Getting around
Shanghai has a cheap and convenient subway system. Taxis are also cheap but you will need your destination written in Chinese as drivers do not speak English. 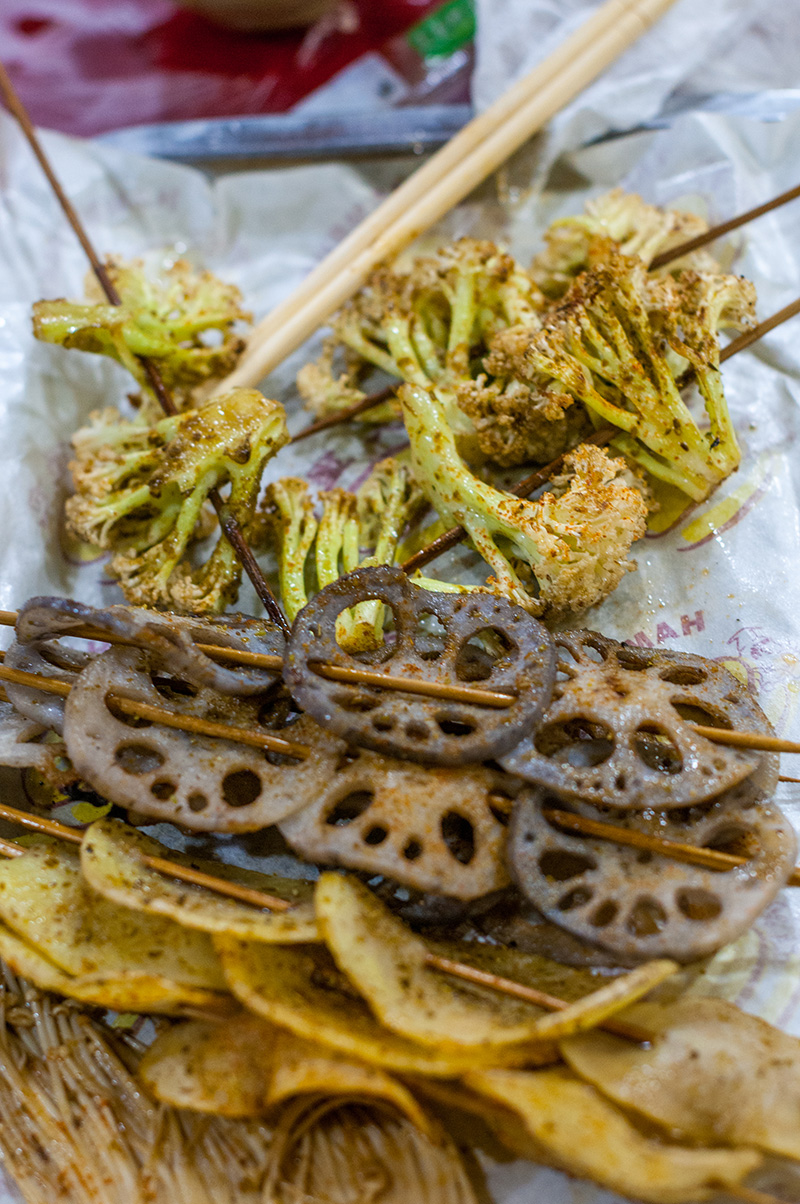