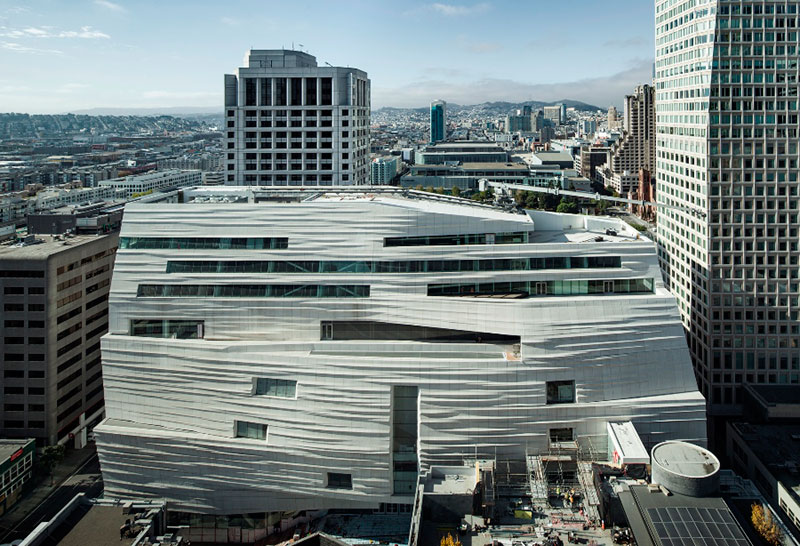 The San Francisco Museum of Modern Art (SFMOMA) is set to re-open on Saturday 14 May after undergoing an extensive transformation which has seen the exhibition space expand to nearly three times its previous size, significantly enhancing the gallery, education, and public spaces.

Founded in 1935 as the West Coast’s first museum devoted to modern and contemporary art, SFMOMA will re-open with an exhibition of 260 works from the renowned Fisher Collection, a first showing of more than 600 artworks, the debut of the new Pritzker Center for Photography and a brand new outward-looking architectural design which includes a newly constructed 10-storey addition to the existing building.

The building expansion will offer nearly 45,000 square feet of free public access in ground floor galleries, with free admission for visitors 18 years and younger, cementing SFMOMA’s role as a vital cultural and social hub in the heart of the city.

Other major highlights in the expansion campaign include; the Campaign for Art, a multi-year collections campaign which has so far secured more than 3,000 artworks from more than 200 donors; a new partnership with the San Francisco Film Society which will see the museum produce its first ongoing film program, Modern Cinema; the new Koret Education Centre offering more educational programs; the White Box space for performing arts; a two-storey conservation centre; and the highly anticipated In Situ restaurant, with Michelin-starred chef Corey Lee at the helm.

Speaking of the development, the SFMOMA Helen and Charles Schwab director, Neal Benezra comments: “This expansion enables us to tap more fully into the energy all around us, in a region known for its special creativity and beauty, while greatly increasing the presentations of a collection that includes remarkable concentrations of artworks that can be found nowhere else, and we look forward to welcoming the public to the stunning new expansion.”

Over 500 donors have supported the multi-million dollar seven-year expansion project, and further fundraising will continue for education, art commissioning and exhibition programs.