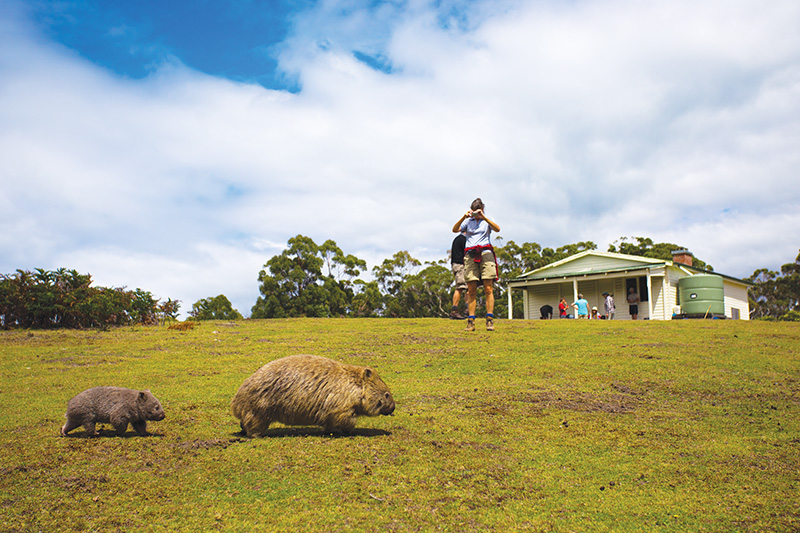 Once the home of the Tyreddeme Aborigines who came here long ago in reed canoes, Maria Island off the east coast of Tasmania is a 20km x 12km shining-white haven of tranquility. Actually two islands linked by a narrow isthmus, this mostly flat island which has had national park status since 1972 is punctuated by two mountains – Mt Bishop and Clerk (608m) and Mt Maria (709m) – and is ringed by kilometres of pure white sand beaches. Native animals are here in abundance on what was once a whaling outpost and penal station. And the trails? Just follow the sand. 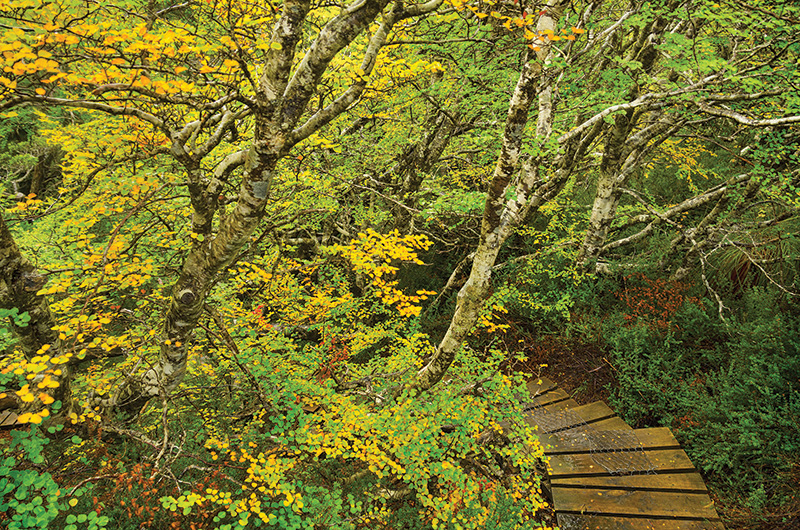 Tasmania’s Overland Track has the moniker of “Australia’s must-do track” and it isn’t hard to see why with its dense temperate rainforests, dolerite mountains, and beautiful Lake St. Clair with iconic Cradle Mountain reflected in its still waters. But it’s a challenge: six days in a region where snow can fall at any time, where rainfall can be misty and persistent, and don’t forget 64km will take you six days to traverse. If that’s not long enough why not summit Mount Ossa – at 1,617m, Tasmania’s highest peak. 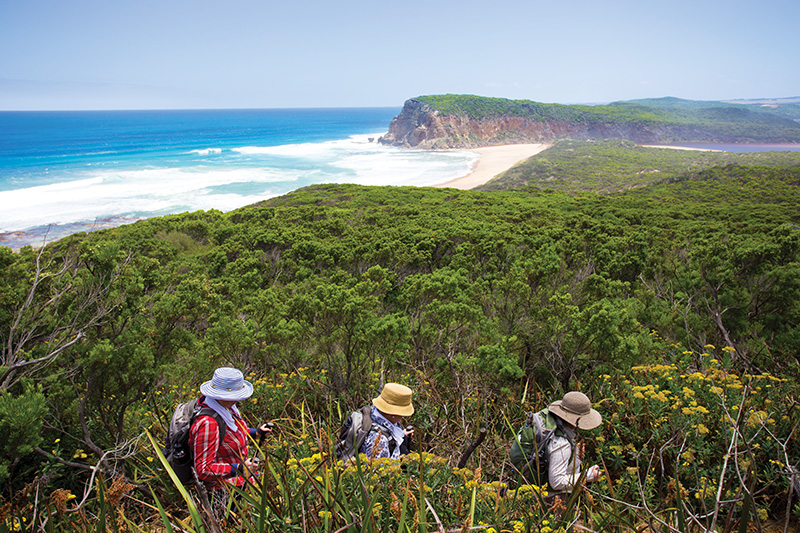 It begins in the sleepy Victorian town of Apollo Bay and becomes increasingly grand – and difficult – the further west you go, until you finally arrive, gobsmacked, 104km and a week later at The Twelve Apostles – that great line of limestone stacks off one of Australia’s most dramatic stretches of coastline. Created by a Parks Victoria ranger in the 1990s the trail lies within Otway National Park, has seven walk-in camps along the way, and intimately hugs the coastline, meandering where its bitumen precursor – the Great Ocean Road – cannot. 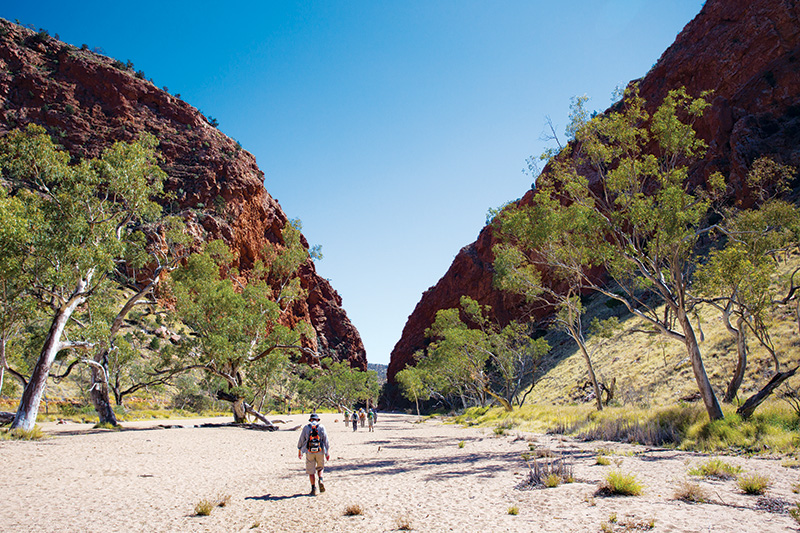 A 222km-long trail composed largely of quartzite thanks to an era of mountain-building geologists call the “Alice Springs Orogeny”, this most famous of outback trails begins north of Alice Springs, continues along the backbone of the ancient West MacDonnell Ranges, and ends at what is also the trail’s high-point – Mount Sonder (1,380m). High temperatures mean the walking season here is a short one – from June to September – but long enough to provide lifetime memories of Standley Chasm, Serpentine Gorge, Jay Creek, Birthday Waterhole – and all the red and ochre-hued wonders in between. 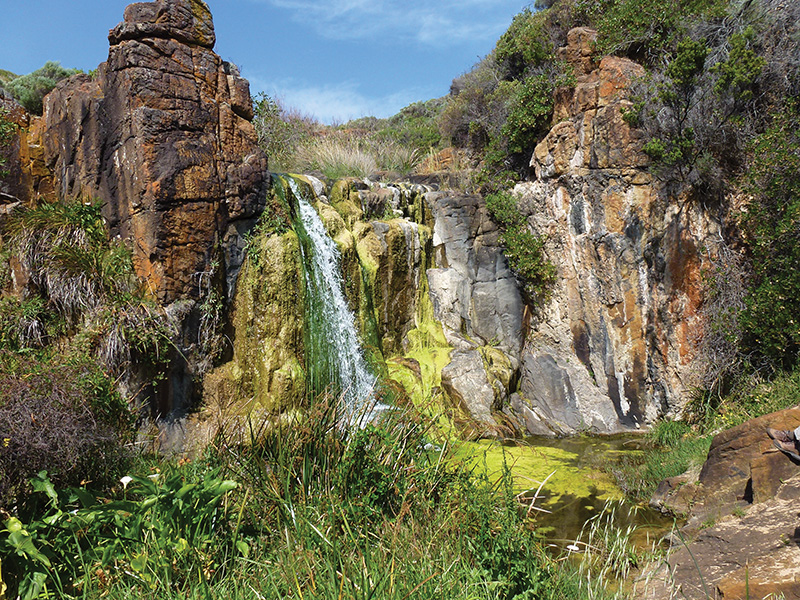 Running along the top of a steep, cave-encrusted limestone ridge from Cape Naturaliste to Cape Leeuwin in the far southeast corner of Western Australia, the Cape to Cape trail parallels a gorgeous white sand coastline that takes you through sheltered woodlands, around rocky promontories, and through coastal heath filled with wattles, banksias and buttercups. At 134kms it is Australia’s longest coastal trail, and while the state’s famous wildflowers make spring a good time to visit, its ever-present cave system – one giving up more than 10,000 recovered fossils – makes anytime a good time to walk this coastal wonderland.

Deliberately made 1.8m (6ft) in width in 1884 so horses could be ridden three abreast, the Six Foot Track begins near Katoomba in the Blue Mountains two hour’s drive west of Sydney and still continues – more or less – on its original 44km course to the Jenolan Caves. No longer a “short cut” to the world’s oldest network of open limestone caves, this classic Australian trail has it all: Nellie’s Glen, Bonnie Doon Falls, exquisite Megalong Valley, and yes, that exhausting ascent – 457m in just 2.4kms – over Mini Mini Saddle. 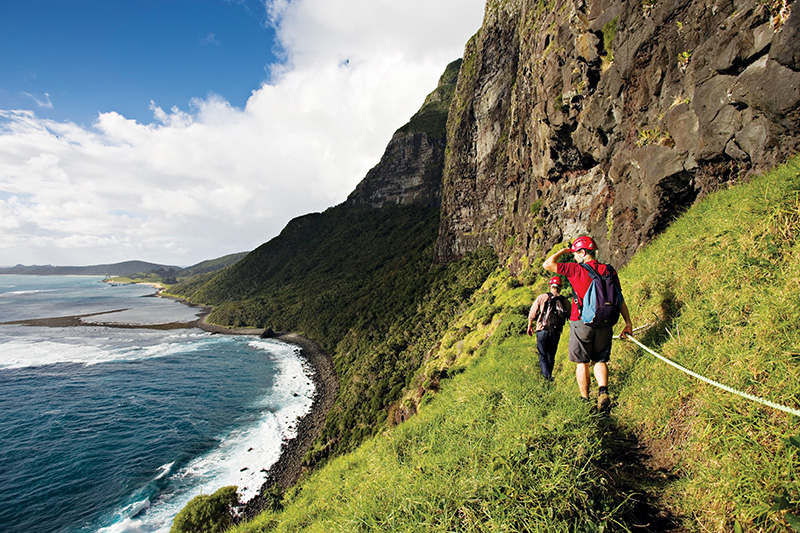 One of the first things our guide told us as we assembled near the base of Mount Gower (875m) on Lord Howe Island – a crescent-shaped volcanic remnant 600kms off the New South Wales coast – is that for seven out of ten of us this partly rope-assisted climb over at times near-vertical rock faces will be the most strenuous thing we’ve ever done. That was no mere hyperbole. But what barely passes as a trail takes you on a climb to remember through a mossy, orchid-studded cloud forest that leads you onto a “Lost World” plateau-like summit. Electrifying. •