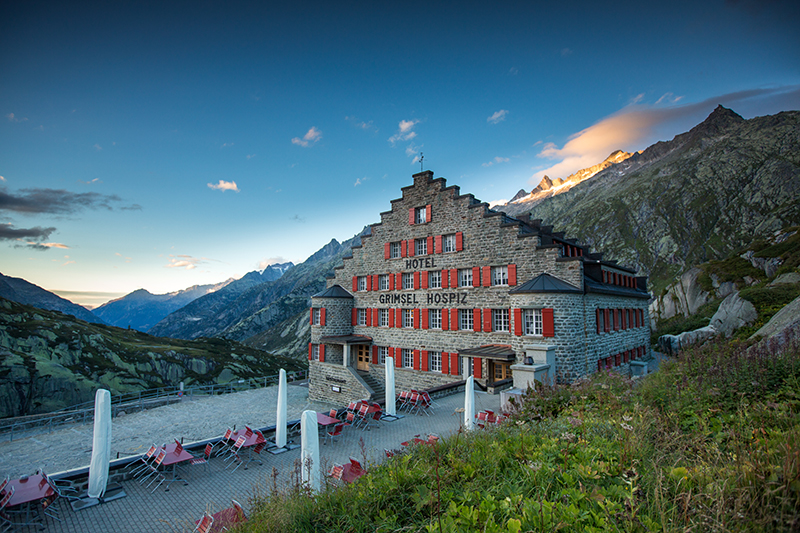 On my way to the breakfast room in the Landgasthof Ruedihus, in the village of Kandersteg, I pass an impressive collection of antique wall clocks. Not one of them shows the correct time. ‘How very un-Swiss,’ is my first thought. ‘How charming and reassuring,’ is my second. They want me to have a good time, rather than be in good time.

It’s a relief in this highly efficient, impeccably organised and ruthlessly punctual country to discover quirks in the accommodation and self-deprecating humour in the staff. Business travellers no doubt appreciate things running as precisely as, well, a Swiss watch, but we’re not all in a hurry. Some of us want to take time to smell the roses, commune with nature at our own pace, and perhaps learn a little history.

Swiss Historic Hotels is a network of accommodation ranging from simple inns to five-star luxury establishments, each with an interesting past and individual character. Most have been recently renovated to include mod cons, while carefully maintaining links to their authentic, original state.

Switzerland is good at tourism. Its breathtaking mountain scenery has attracted visitors for centuries and the Swiss have become expert at making exploring natural beauty comfortable, convenient and accessible. The danger is that they’ll make it all too easy. As early as 1882, keen outdoor adventurer Mark Twain was observing, ‘There isn’t a mountain in Switzerland that hasn’t a ladder railroad or two up its back like suspenders.’

The hotels I stay in on this trip are small and though they can sometimes boast illustrious former guests, they’re unpretentious. First class service doesn’t mean snooty waiters rattling off a daunting wine list and enforcing dress codes. The Swiss hospitality I find is friendly, welcoming and as smooth as a Roger Federer backhand. Guests are made to feel like family friends.

And it goes without saying that the locations are spectacular.

Zurich is of course known as a modern business and banking town. But an easy train trip takes me to the lakeside village of Küsnacht, just a few minutes from the CBD.

This hotel, which began as a small tavern in 1641, expanded in the 19th century, adding a ballroom, among other features. Seehotel Sonne became a meeting place for intellectuals, a site of serious discussion, with guests including Carl Jung, Franz Kafka, Thomas Mann and Vladimir Lenin.

The beer garden and restaurant by the water are popular with locals and visitors alike. And for those with an interest in art, the hotel displays a serious collection of original works by Andy Warhol, Alexander Calder and leading Swiss artists. 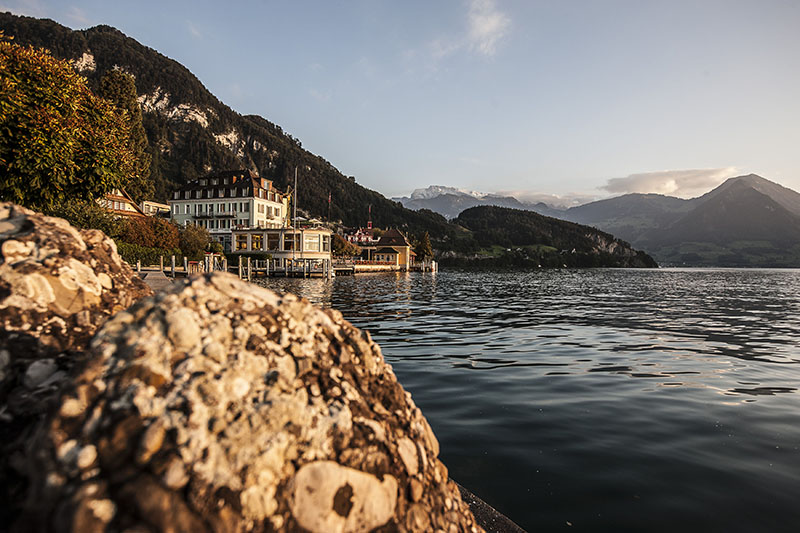 Location, location, location! The small, simple and charming hotel stands at the foot of Mount Rigi on the edge of lovely Lake Lucerne. The curved glass windows of Restaurant Rondel provide wonderful 180-degree water views. Ferries and pleasure craft chug past as guests dine on fish caught in the lake, meat from the farm further up the hill and wine so local you can see the vineyard from the hotel terrace.

Hotel Terrasse opened in 1873 to serve the staff and guests of the Rigi Railway, one of those suspenders Mr Twain complained of. It was Europe’s first mountain railway, ratcheting steeply up to the busy lookouts and restaurants on Mount Rigi.

Yes, it may seem at first a bit too civilised and organised, though nature lovers like me can easily step out on one of Rigi’s many walking trails to escape the hordes of selfie-takers. An hour or two of activity is enough to work off any excess calories and guilt acquired at lunchtime. 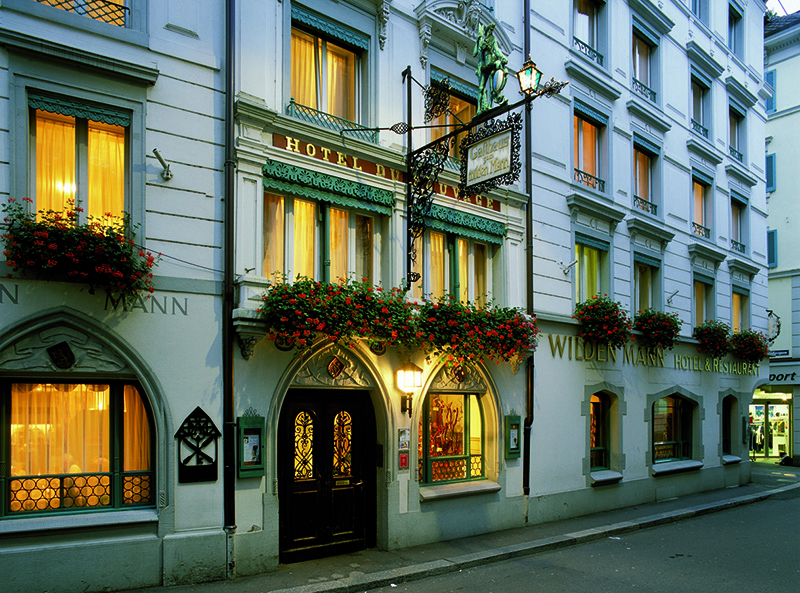 Legend has it that, in bygone days, a giant ‘wild man’ protected Lucerne from outsiders. His likeness – near naked, muscled, bearded and brandishing an uprooted tree – is painted under one of the arches of the town’s famous Chapel Bridge, and reproduced in the hotel that now bears his name.

For 500 years, Hotel Wilden Mann in the heart of Lucerne’s Old Town has been welcoming guests. It prides itself on its rough and seedy past, first as an unlicensed bar, then as an inn. Following a 19th-century makeover it began its move towards its present incarnation as an upmarket hotel.

While the creaky floorboards, winding staircases and original washstands in the corridors set the atmosphere, guests these days are no doubt grateful for the modernisation, which has added en suite bathrooms and a lift. Nonetheless, the accent in the décor, different in every room, is definitely on retaining olde-worlde charm. 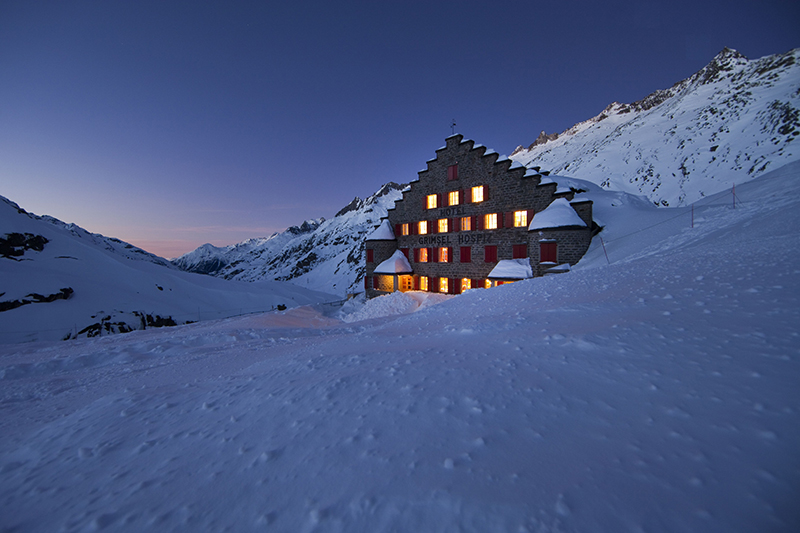 With a name like ‘Grimsel Hospiz’, we might expect a sinister medical facility run by an evil genius. And indeed the hotel’s setting above the massive wall of a hydroelectric dam, surrounded by rocky, snow-capped peaks would make an excellent location for a James Bond adventure. However, I am quickly assured ‘hospiz’ has more to do with hospitality than hospitals.

The original inn in this area dates back to 1142, serving travellers over the remote mountain pass until the present hotel was rebuilt in 1932. In summer, it is accessed by a switch-back road, and the trails around the hotel are popular with hikers. In winter the road is impassable and the Grimsel is reachable only by cable cars and a shuttle through underground tunnels.

It’s impossible to imagine a more extraordinary approach to a hotel. Once there, visitors are trapped in what the manager describes as a ‘luxury Alcatraz’ – fortunately one with an extensive wine cellar. 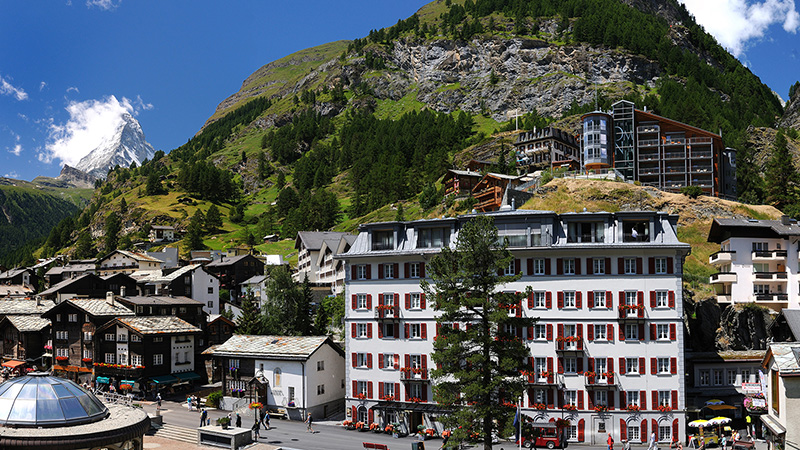 Zermatt is famed for wonderful walking and skiing and above all for its iconic peak – the Matterhorn.

In 1865, in the dining room of Hotel Monte Rosa, English alpinist Edward Whymper planned the first ascent of the mountain. Whether we should call his expedition ‘successful’ is a matter of opinion. Whymper’s team did indeed reach the summit, though after four of his companions perished on the way down, celebrations must have been muted. Queen Victoria considered calling for a ban on further attempts to climb the Matterhorn, which Zermatt residents claim only boosted its popularity. Photos in the hotel’s Belle Epoque sitting room show the many climbers and other celebrity guests who have stayed here.

No longer is the Matterhorn for hard-core adventurers only. Thousands of visitors, myself included, ride the Gornergrat Railway up to a vantage point from which they can aim their smartphones at the peak.

Zermatt village has taken the enlightened step of banning motorised traffic other than a few electric vehicles, making it particularly quiet, despite its crowds. As if to drive home this point, a herd of black and white goats, with jingling bells, traipses down the main street past the Hotel Monte Rosa every morning. 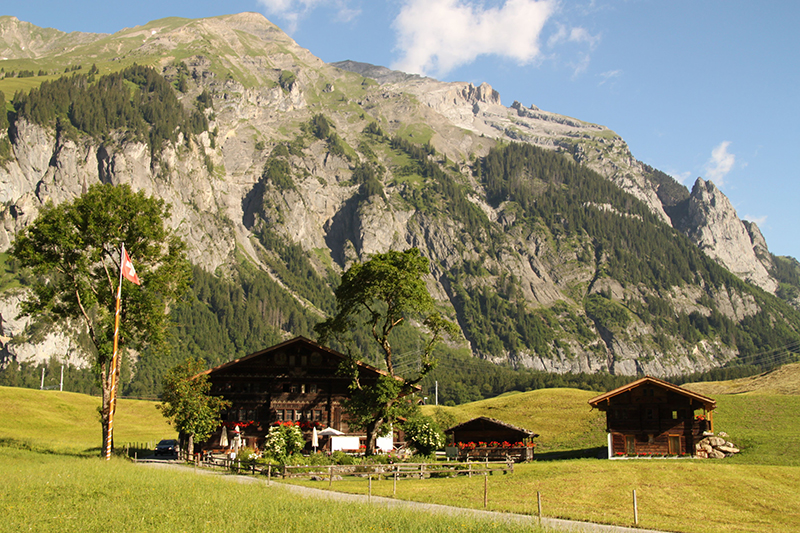 I have to smile as I arrive at this 250-year-old wooden chalet. It so perfectly represents the picture postcard Switzerland of children’s storybooks. There are geranium pots on the windowsills, low wooden ceilings, the aforementioned collection of old clocks in the breakfast room and staff in traditional dress.

The towering cliffs behind it make the perfect setting for a simple meal of traditional Swiss cuisine (cheese, cheese, cheese, potato, ham and cheese) in the form of fondue, raclette or rosti.

For those who prefer more upmarket comforts, a five-minute walk away is Ruedihus’s partner hotel, the modern Doldenhorn, with spa, swimming pool and fine dining.

Kandersteg is an unabashed holiday town, where tourists vastly outnumber locals. But the gorgeous Berner Oberland area oozes friendly simplicity. Lovely Oeschinen Lake, surrounded by snow-capped mountains, is easily reached by gondola, yet I find it far from crowded, even in peak holiday season. 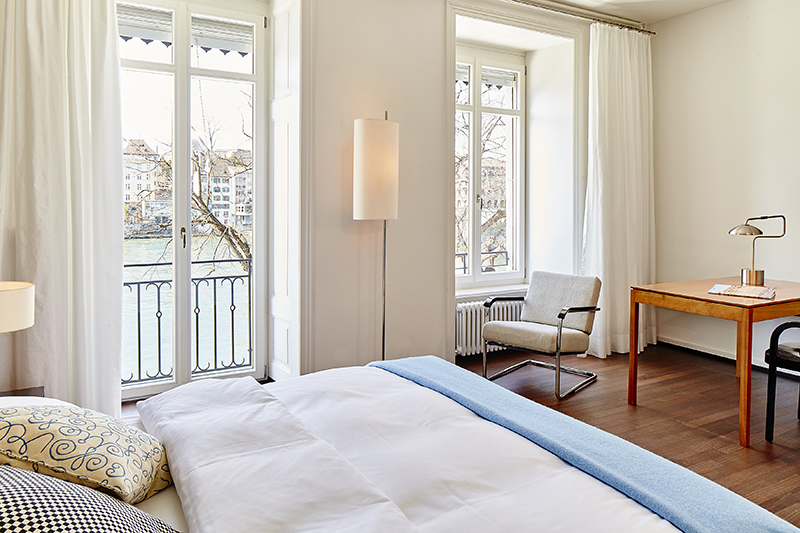 The first thing I reach for when I walk into my room in Hotel Krafft is my camera. The arch of my balcony forms the perfect frame for the Rhine river, with the buildings of Basel’s Old Town and the spire of the cathedral on the bank beyond.

Herman Hesse reputedly wrote much of Steppenwolf in this hotel. For me, lunch on the terrace takes priority over writing. It’s a hot day, so Basel residents are indulging in their favourite pastime – stuffing their clothing into a ‘wickelfisch’, a watertight plastic bag that acts as a floatie, then wading into the river to be swept around the bend.

Upstream, ferries use a cable and the current to carry pedestrians and cyclists across the river. The hotel kindly lends me a folding bike, so I can pedal along the cycleway by the water, out to the three-way border where Switzerland, France and Germany meet.

That evening, I skip the city’s fine dining options and take the advice of the hotel’s concierge. Microbrewery Fischerstube just along the street from the Krafft does excellent, affordable local food to complement their ales, served in a laid-back beer garden out the back.

It’s my kind of place in what I’m learning is my kind of country. They expect you to take your time. • 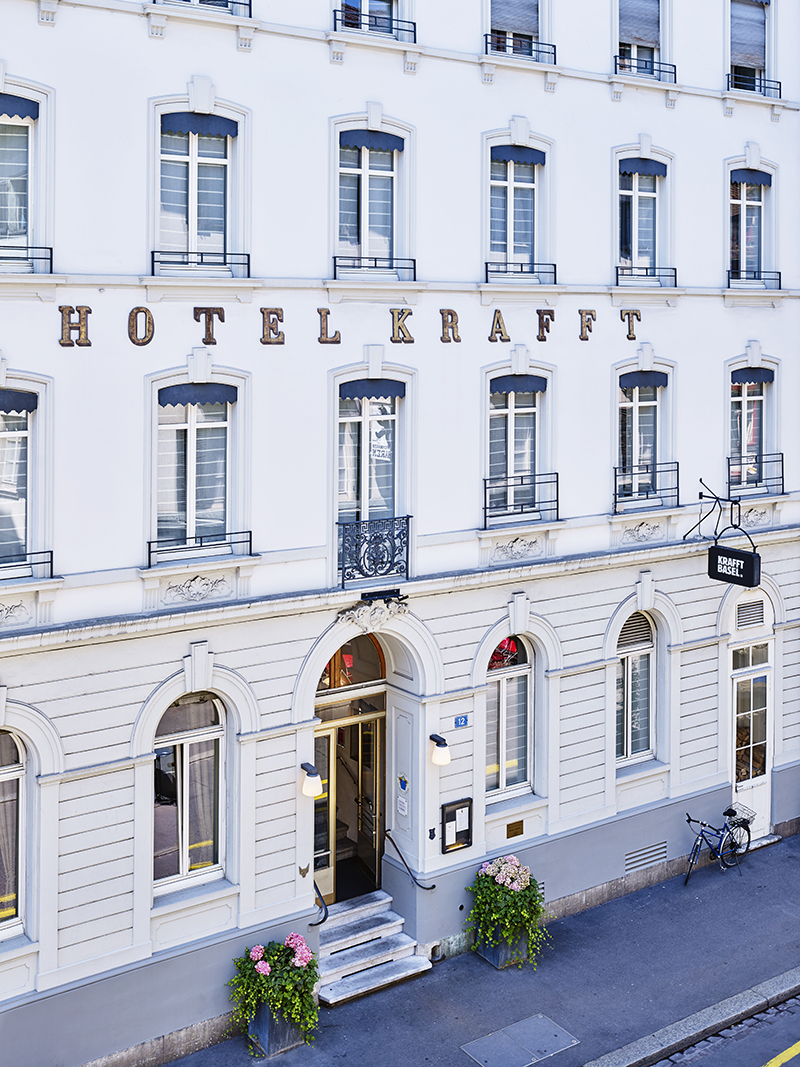 Getting there
Qantas flies from Melbourne or Sydney to Geneva via Dubai. Singapore Airlines flies to Zurich via Singapore. qantas.com.au; singaporeair.com

Getting around
A Swiss Travel Pass, valid for 3–15 days gives unlimited use of trains, buses and ferries throughout the country. swissau.mytraintravel.com

When to go
Switzerland’s cities can comfortably be visited at any time of year. Outdoor adventurers must consider the seasons. Zermatt and Kandersteg are centres for winter sports from October to May, while hiking trails generally open between June and September.