Before Game of Thrones propelled Dubrovnik’s Old Town into the league of extraordinarily popular European destinations, the fortressed city was known on the world stage for a much darker reason. It was here that the siege of Dubrovnik almost destroyed the city, during eight months of particularly brutal and bloody conflict with the Yugoslav People’s Army during the Croatian War of Independence.

Today, just 25 years later, Dubrovnik is a darling of the international jet-set. The scars of a war once fought are still there, in the bullet holes that pockmark the centuries-old churches and city gates, but an infectious enthusiasm for the future and a renewed vigour fills the air, welcoming visitors from around the world.

We ask our tour guide, Maria, what young Croatians think about the war. “It is not a simple story or history,” she says, “but thankfully that chapter is behind us.”

The new chapter that Croatia is writing is one in which visitors are coming en masse – including thousands of Australians – to relax at Adriatic seafront beach clubs, to explore the fabled Old Town, and yes, to find every last Game of Thrones filming location. 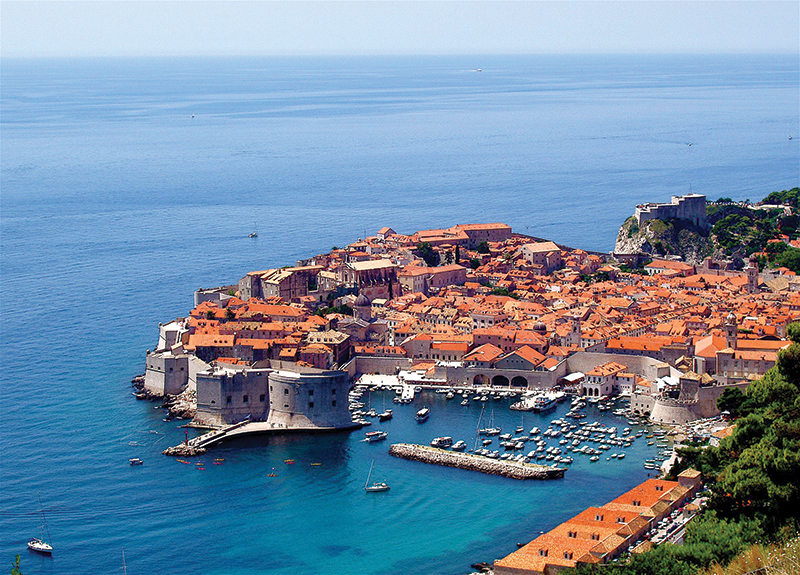 Arriving by bus from Dubrovnik’s international airport (public transport in the area is terrific), the scenery is spectacular. The road twists and turns, affording breathtaking views of the winding coastline. The Adriatic Sea here is a darker blue than the sparkling Med you’d expect to see on the Côte d’Azur, and the striking contrast to the orange and cream buildings of the Old Town sets off the clicking of an orchard of Apple iPhones.

Later that day, we explore on foot, circumnavigating the ancient city along the well-trodden path of the top of the city walls. Built around 1,400 years ago to surround and protect the citizens of the city, the fortified stone walls have been modified countless times and are now listed as a UNESCO World Heritage Site.

Within the walls we spot the Rector’s Palace, an impressive Gothic structure that through the years has been the home of Dubrovnik’s governors, prisoners and armoury guards, and most recently doubled as a prime King’s Landing location. Nearby, Bokar fort will be instantly recognisable to Game of Thrones fans as the site where Tyrion and Lord Varys planned the defense of King’s Landing in Season 2. 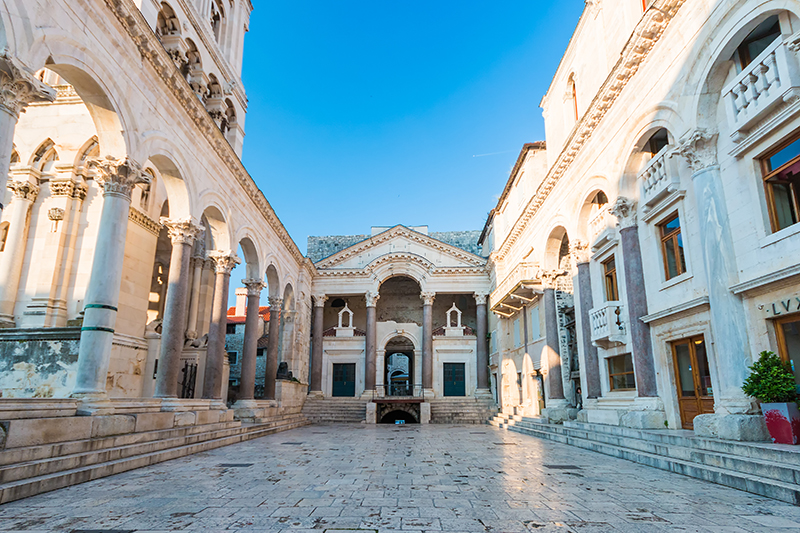 Thanks to a tip from our guide, Maria, we step through a simple, unmarked doorway on the southern end of the city walls to discover what surely must be one of the most spectacular bars, not just in Croatia, but in the world. Buza Bar – the name means hole in the wall – is perched on the rocky cliff outside the fortress wall and the sunset views out over the Adriatic Sea are simply unforgettable. People braver than I am jump and dive straight into the sea below, while I am content with a cold beer at one of the precariously perched tables.

We can see Lokrum Island, a lush green nature reserve popular with sunbathers (clothing-optional enthusiasts as well as more conservative types) and those seeking peace and quiet away from Dubrovnik’s crowds. It’s about 15 minutes away by taxi-boat and we make plans to spend an afternoon there.

For dinner we stop by EastWest beach club, a sexy, stylish meeting place for the cool young things who swan around Europe’s beaches all summer long. A celebrity DJ is hitting all the right notes, as we lounge on all-white beach furniture and sample the local cocktails. It’s an intoxicating scene and one that Dubrovnik is becoming well-known for.

This coastal region has also gained a very good reputation as a magnet for seafarers and yachties keen to jump onboard and island-hop all the way up to Slovenia and down to Montenegro. International sailing operators, such as Sunsail, offer skippered yachts or bareboat charters for confident, independent sailors. 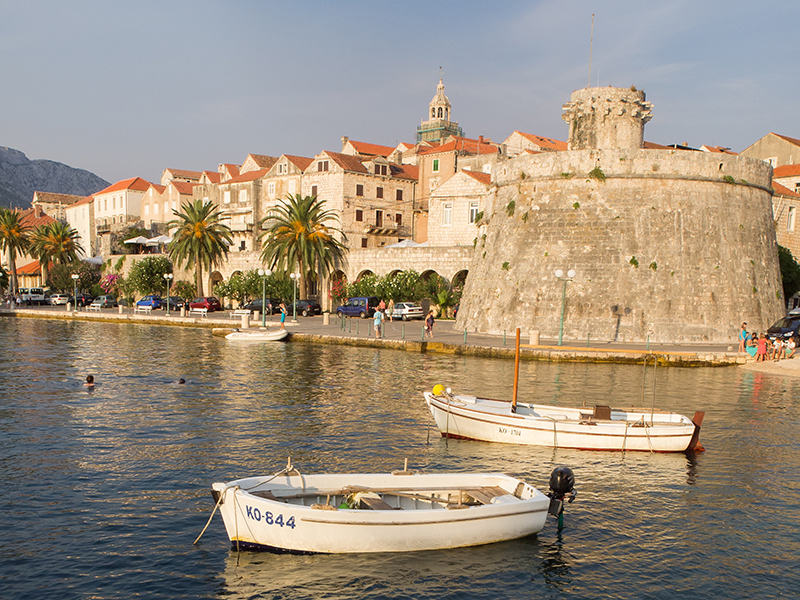 The sailing conditions are ideal for exploring one of the most beautiful coastlines in Europe; while most sailing voyages depart from Dubrovnik marina and return either there, or sail to Split a week later, it’s possible to visit historic cities, charming fishing villages, National Parks and secluded anchorages in just a few days.

We sailed out of Dubrovnik on a 36-foot yacht with a Croatian skipper and a vague idea of where we wanted to go. The skipper, Robert, suggested we spend the first night anchored out front of a secluded restaurant he loved in Kobas, about three hours from Dubrovnik. At Luka’s Tavern, 99 per cent of diners arrive by boat and I’d guess 100 per cent depart with satisfied bellies. An octopus salad is plonked in front of us, the succulent fresh chunks of octopus swimming in tomato, olive oil, garlic and paprika. Homemade sourdough bread is the perfect scoop for the last of the juices. An enormous deep dish of fresh mussels steamed in white wine follows, then a fried swordfish that is salty, crispy and buttery all at once. Traditional Croatian cabbage salad is a fresh palate cleanser, and the big plate of veggies makes us feel virtuous enough to order a second bottle of local white wine. 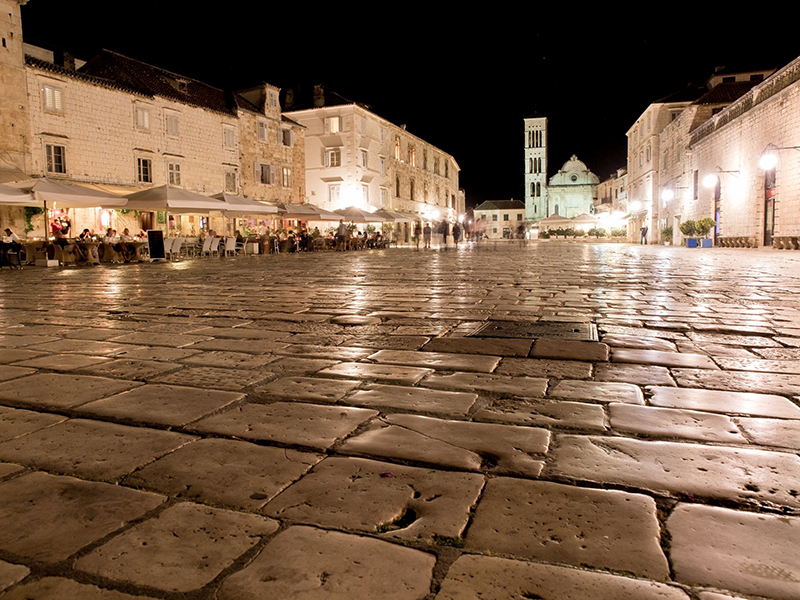 At $250 for three people, the bill also covers our mooring fee at Luka’s dock for the night. We squeeze into our cabins at bedtime and enjoy the novelty of drifting off to sleep to a soundtrack of lapping waves.

The next morning, we make tracks for the island of Korcula, the birthplace of Marco Polo. With little to no wind, we need the motor to propel us along. The only vessel for as far as the eye can see, we feel as if we could be the only people in the world. The scenery is very pretty, a moving theatre of golden sand beaches, rocky mountains and lush, green scrub.

Robert drops anchor as we approach Korcula and we jump straight into the clean, navy-blue water from the back of the boat. It’s very salty and we laugh like children as our buoyant bodies float near the surface. On the sandy shore we can see 40 or 50 sunbathers dipping in the sea, but out here it’s all ours. Later we explore the town, which has been described as a smaller, more charming Dubrovnik. Avoiding the souvenir shops and museums dedicated to Marco Polo, who ‘might’ have been born there, we walk and watch the locals and are rewarded with memorable snapshots of village life, from the sunbathers braving the rocky cliffs, to a flock of Catholic nuns hurrying to the cathedral. We settle in at a restaurant in the Old Town to enjoy hearty bowls of fish stew.

Docking for the night at Orebic, a small fishing village on the peninsula across from Korcula, we wander the main street. An old stonemason is chiselling white marble headstones by hand, while at open-air seafood restaurants, the grills are sizzling with fresh calamari and fish. Local people outnumber the tourists three to one, and it seems as though not much has changed here in the past 50 years. 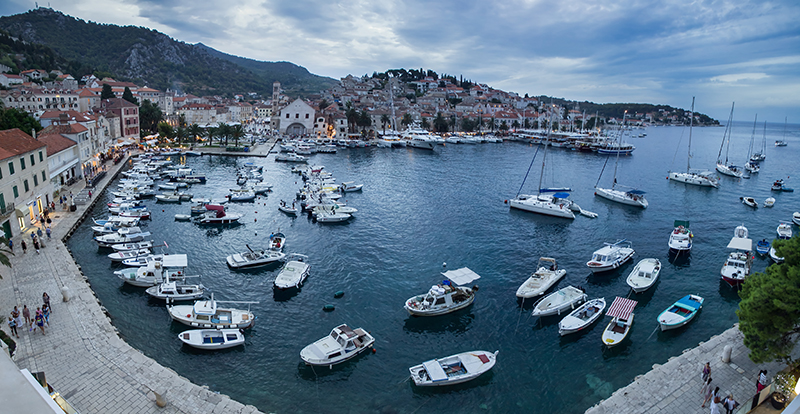 A sunset dip in the sea is the penultimate perfect ending to the day; that final honour goes to a caramel and crunchy toffee ice cream cone, homemade by the entrepreneurial sisters at Croccantino gelateria, who learned the art of ice-cream making in Italy. We are rocked to sleep, again, by the gentle waves.

As lovely as the experience is, we are rookie sailors and made rookie errors. Lugging big suitcases, for one thing, is a no-no: it’s best to pack light and small, as large suitcases take up a lot of the shared living space on-board. The shower and toilet facilities require agility and a strong stomach; it’s also a good idea to prepare ahead for the possibility of seasickness.

Not aware of the custom of passengers paying for, or providing, all of the skipper’s meals, we have an awkward moment when the bill arrives at Luka’s Tavern. Overnight mooring or docking fees are also paid by the guests and can run to $100 per day. Bring plenty of cash, as ATMs can be hard to find in the smaller villages.

With more time to plan our next trip, we would research and plan a longer sailing itinerary that leaves plenty of days to explore further afield. Hvar, the party island, has become the belle of the Dalmatian coastal islands, consistently ranked in top ten lists for its beautiful beaches, all-night discos and a winemaking region that produces some of the best drops in Croatia. It’s an essential stop on a seven-night sail from Dubrovnik, as is Split, the country’s second largest city.

Located some 230 kilometres north of Dubrovnik, Split is also a UNESCO World Heritage Site, filled with cultural gems, important museums and some of Croatia’s finest art. Diocletian’s Palace is at the centre of the old town, and the streets around this ancient Roman complex of massive buildings are said to be the best place for market shopping, coffee stops and people watching. 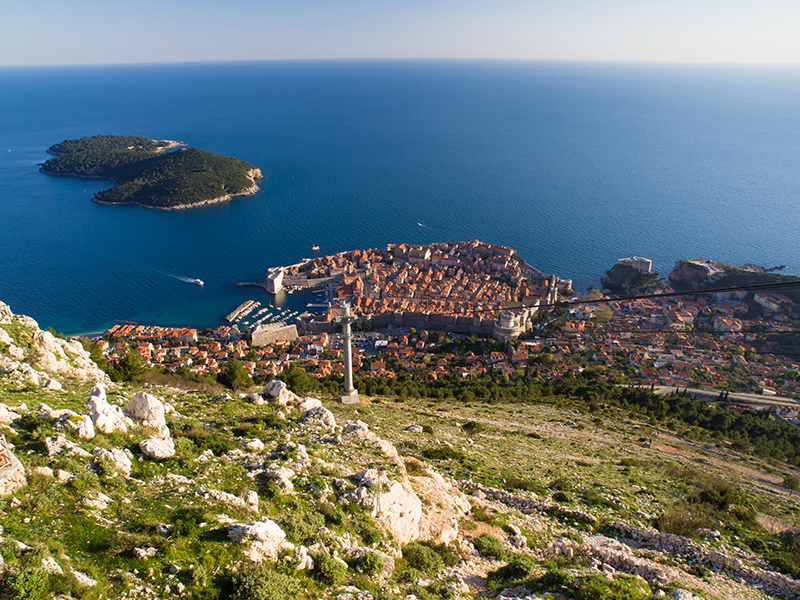 So many places to explore, so little time. Sailing in Croatia requires a commitment of at least a week to do justice to the highlights. Better still, undertaking a learn-to-sail course would be a wise investment for the opportunity and freedom to self-charter a yacht and be your own skipper. Or you can choose to go on a cruise with Katarina Line, who have a fleet of bigger vessels to suit a range of budgets, and a range of different itineraries as well as land-based tours.

On the last full day of our trip, we head to Mljet National Park. The scenic cruising is a treat, as we are surrounded by nature and grab the binoculars to spot colourful birds in the thick green forest. Dropping anchor out front of acclaimed restaurant Antika, on the edge of the National Park, we are joined by a flotilla of Sunsail yachts, self-skippered by holidaymakers with sailing experience from as far afield as South Africa, New Caledonia and Australia. It seems we’ve all had the same idea, and that is to call ahead and order the three-hour slow-cooked organic lamb and potatoes. Washed down with Karlovačko beers and Canavia wine, all made locally, the meal is peppered with anecdotes of the life aquatic. •

Many airlines fly from Australia to Dubrovnik via connections in Europe; consider British Airways, Lufthansa and Austrian Airlines. Croatia Airlines (a codeshare partner of Emirates) offers convenient connections from Dubrovnik to other destinations within the country, including Zagreb. ba.com; lufthansa.com; austrian.com

Sailing There
Arrange your skippered or self-chartered Croatian sailing vacation through experienced local operators. Sunsail has two bases in Croatia – Dubrovnik and Agana. Katarina Line offers 25 different itineraries on 50 vessels in four categories, from the middle of April until the middle of October, with departures from Opatija, Split and Dubrovnik.
• Sunsail: sunsail.com.au
• Katarina Line: katarina-line.com

Where to Stay
Airbnb offers short-term private accommodation in Dubrovnik, with many properties in prime locations close to the Old Town and the sparkling Adriatic seafront. airbnb.com

For a five-star start to your Croatian vacation, stay at one of Dubrovnik’s knock-out luxury hotels. Villa Orsula is modelled on a traditional Mediterranean villa, while the Pucic Palace (boasts a prized position within the old town fortress walls. adriaticluxuryhotels.com; thepucicpalace.com

When to go
The summer months – June, July and August – provide the most consistently sunny and warm conditions for sailing, so naturally this time of the year is when the area attracts the most tourists. The shoulder season months of May and September can offer good value, warm enough temperatures and a less crowded experience.

Further information
• Croatia Tourism’s website has information and tools for planning a trip to Croatia. croatia.hr