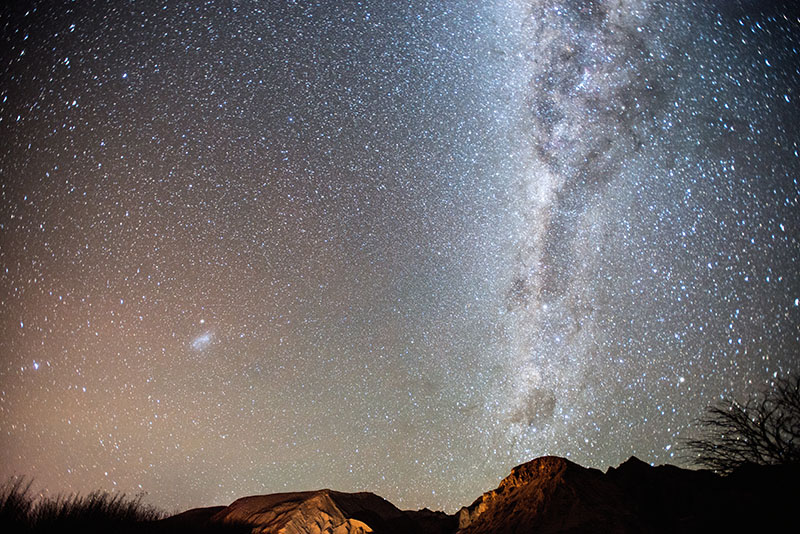 I’m what you might call a star virgin. I’ve spent most of my life in cities where clouds and smog are my nightly attractions. I tend to look straight ahead, not up, to avoid accidents. And sky (with an extra “y”) is a type of vodka I drink in cavernous indoor bars; nothing more.

Suffice it to say the stars and I have been on very few dates over the years, so as I set off for the Atacama Desert of northern Chile – a place that will be home to more than 70 per cent of the world’s astronomy infrastructure by 2018 – I assume right away that it’s no place for an amateur stargazer like me. However this assumption proves utterly misguided not long after I set foot in the desert oasis-cum-tourist hub of San Pedro.

San Pedro is a tortured landscape that looks and feels as if it was ripped off Mars and beamed back to Earth. It is, after all, the very place NASA tests its instruments for future missions to the Red Planet. 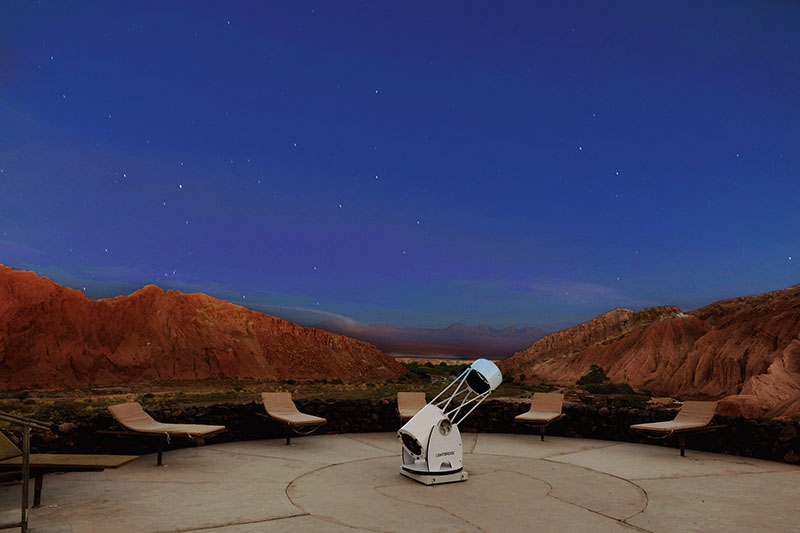 Though it was once the seat of the most advanced pre-Columbian society found in Chile, the San Pedro of today teeters between its Incan past and some sci-fi version of the future, all the while acting as a tourist vacuum sucking up star virgins and spitting out amateur astronomers. Light-polluted urbanites such as myself enter with big sky dreams, we learn to connect the dots above from bug-eyed scientists, and are soon versed in all the dirty words like globular cluster and interstellar gas.

These gems come to me my first night in town at the hilltop observatory above my hotel, Alto Atacama. Each time I peel myself off the lounger and peer into the 16” telescope it offers a new peephole into some alternate reality. I find myself enchanted by the red glow of the supergiant star Antares, the secret binary star system of Alpha Centauri, and the bright green laser beam my guide uses to illustrate the massive significance of seemingly insignificant specs.

I spot my goal friends for the evening early on: There’s the British businessman who bragged about his £3,000 binoculars and the Aussie sailor who brought his spotting scope. After our astronomy guide packs up the telescope at 10:00 p.m., I offer them use of my only gadgets (pen and paper) so I can geek around with them under the inky blue sky, spotting star clusters and peeking at the duo of irregular dwarf galaxies known as the Magellanic Clouds. 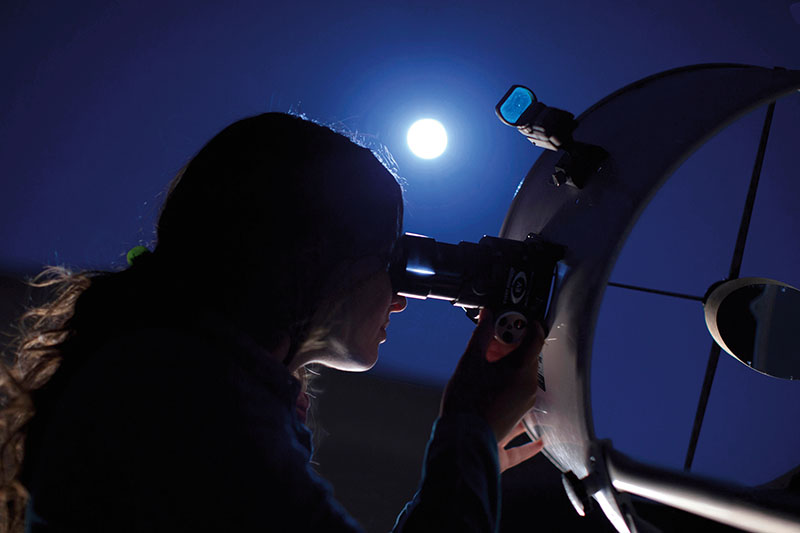 They teach me how to locate due south using the Southern Cross and explain the difference between a nebula and a supernova. All the while, there are celestial arguments the likes of which only fans of the show Big Bang Theory might enjoy. I feel wiser already. I feel astronomical. My first date with the stars was a success.

The next morning I awake at 4:45 a.m. and am halfway up an Andean mountain with my new stargazing buddies by 5:30. We’re packed in a hotel tour bus on our way to see El Tatio, the highest-elevation geyser field in the world and one of the many eerie parallels I’ll discover between the scorched land below and the not so dissimilar planets above.

A pan flute version of Berlin’s Take My Breath Away hums out of the radio as we climb out of the driest desert on earth into the lagoon-dotted Altiplano. The lyrics may be missing but the irony is not, particularly when we rise above 4,000 metres and my lungs tense up.

The high altitude makes me drowsy and puts me into a trance where the line between surreal and real becomes blurred – an ideal mindset for making sense out of otherwise unintelligible constellations. 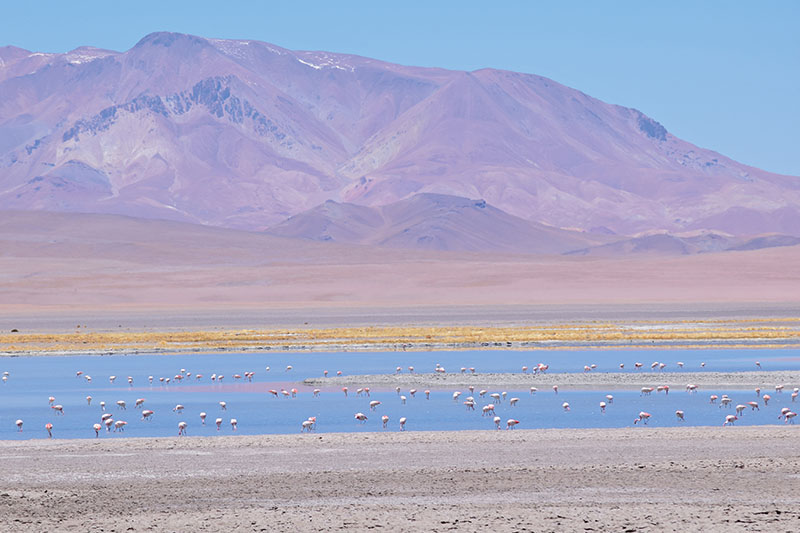 The whole gang is out to play in this cloudless pre-dawn hour. There’s Scorpio and Gemini just above my window. Orion and the Southern Cross twinkle along the horizon. A shooting star even makes a cameo, though I appear to be the only one in the tour bus who saw it.

We zigzag past one of the 16 volcanoes visible on the horizon as the night sky morphs from a sea of stars into a pale blue canvas. When we finally arrive at the geysers it’s light out and teeth-chatteringly chilly. My breath, like the ground, is steaming. The ground (unlike my breath?) reeks of rotten eggs.

Back in San Pedro that afternoon it’s 25 degrees hotter and bone dry. My skin cracks into cobwebs. My lips congeal. My waterless eyes become weary of the stinging sun.

I escape the heat and harmonic flies by dipping into the Museo del Meteorito, lured by the promise of petting a real-life meteorite from the depths of Outer Space.

As I touch the meteorite’s smooth belly, I can’t help but wonder what kind of stories this galactic traveller could tell. My own travels from city to desert seem incredibly insignificant by comparison. 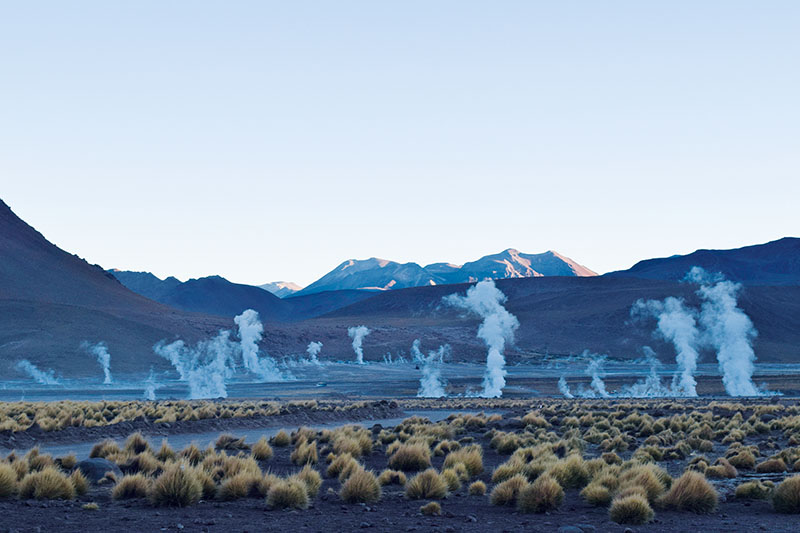 Nearby are 18 fragments from a chondrite-type meteorite discovered in the Atacama 40 years ago. There are also nodules from the Monturaqui Crater, a 380-metre-wide, 31-metre deep hole in the desert about a half-hour south of here that was created by an impact twice as powerful as the A-bomb at Hiroshima.

The Museo del Meteorito seems to suggest that the Atacama Desert is rife with otherworldly gifts, perhaps as a reward for centuries of cosmological curiosity.

Northern Chile’s high altitude, clear skies and dry air have made it an astronomer’s paradise, but the Atacameño people scoured the dark spots of the Milky Way for the answers to life’s big questions long before the first modern scientists arrived in the 1960s.

To learn more about how ancient Andean cosmology lines up with modern astronomy I book a star tour the next day with the indigenous guides at Ahlarkapin, an observatory about 15 minutes outside of San Pedro boasting a $30,000 telescope.

Ahlarkapin means “bright star” in the native Kunza language, and my guide Cesar Anza begins the evening with a lecture integrating scientific facts with the Andean worldview. He notes that the cosmos acts like a clock dictating dates for certain tasks. He then explains how the night sky looks different to the indigenous people of the Atacama Desert. They see a poncho where we see a hunter named Orion, a slingshot where we see a scorpion, and pumas where we see the twins Gemini. They also see a fox, snake and llama within the Milky Way where we simply see dark spots. 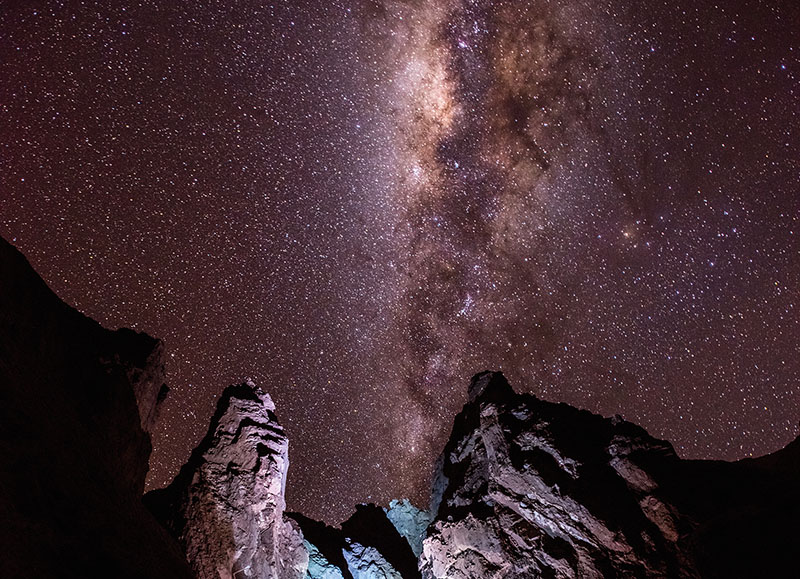 But there are many similarities, too. Anza says that down the road at ALMA, the world’s largest and most expensive ground-based astronomy project, scientists are searching for the origins of our universe just as the Atacameño people have for millennia. The questions are as old as the stars, he adds, but the answers could come any minute.

I rush back to Alto Atacama to share this newfound knowledge with my stargazing mates but they’re nowhere to be found. What I find instead is a pisco sour and an empty Jacuzzi, so I decide to embrace the silence of the desert alone. I let the wind break that silence and then give it back to me and allow my eyes to adjust, then absorb, and finally penetrate the cosmos.

To truly get lost in the Atacama sky you need moments like these, seemingly on your own, but at once aware of how completely surrounded you are by a universe full of twinkling matter.

In my desert Jacuzzi for one, the stars seem both incredibly close and unfathomably far away. They’re collapsing, birthing planetary systems, exploding and giving new life. It’s a veritable soap opera of stories just waiting to be understood. I don’t know why I never took the time to truly appreciate this before, but I know for certain that this won’t be my last date with the stars. • 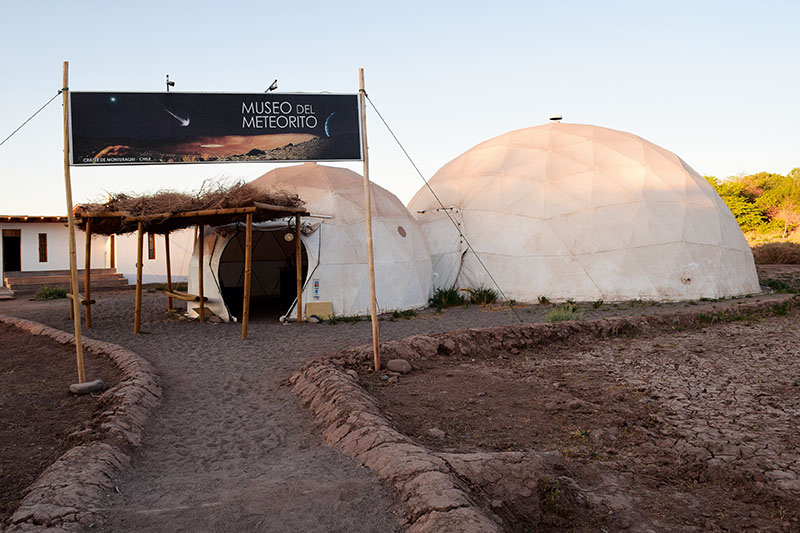 LAN offers direct flights three times a week from Sydney to Santiago, where you can transfer for the two-hour journey to Calama. Most hotels offer transfers from the airport in Calama to San Pedro de Atacama, one hour away. 1800-558-129; lan.com

Getting around
San Pedro de Atacama is compact and exceedingly walkable. Rent a bike for short trips out of town or join a tour to venture further afield.

When to go
The Atacama Desert is a year-round destination, though the summer months (December through February) can be blisteringly hot and are the only time of year you’re likely to see rain clouds.

Where to stay
Alto Atacama is nestled in a quiet canyon just outside of San Pedro de Atacama and is the only hotel in the area with an outdoor stargazing observatory. All-inclusive packages include daily excursions to the Altiplano, salt flats and other regional attractions. +56-2/2912-3945; altoatacama.com