Salvador may not have the international reputation enjoyed by party town Rio, but Salvador is no secret to true Brazil aficionados. 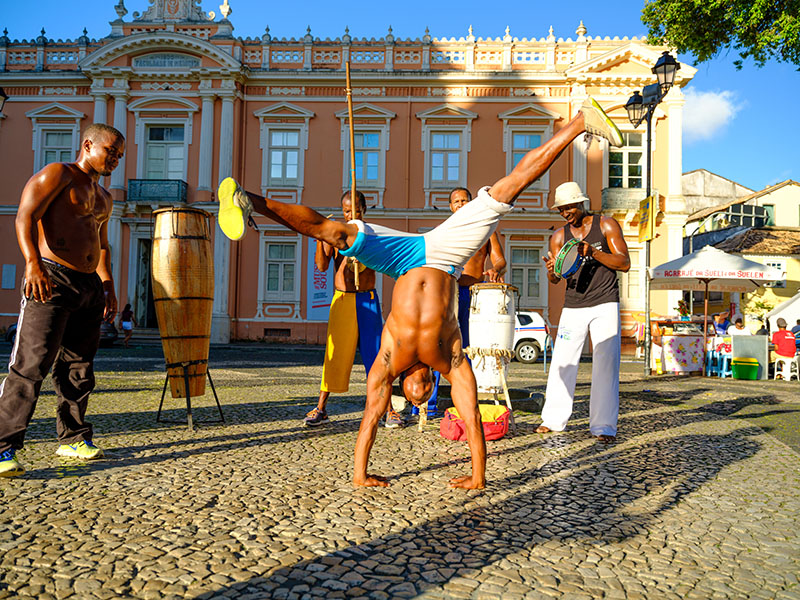 This first capital of Brazil is where Brazilians come to play and holiday. The capital of the state of Bahia, known as ‘the land of happiness’, is full of sunshine and gorgeous Atlantic beaches with outstanding surf breaks and picturesque coconut palms.

Standing high above the beach from historic São Diogo Fort, I ask Gabi Parnetti, my guide and Bahian local, why the Salvadorians pack onto small stretches of coast, rather than spreading out to find their own special stretch of paradise along the hundreds of kilometres of Bahia’s Atlantic shoreline.

“This is not like Australia,” Gabi says with a smile. “In Salvador, we come to the beach to be close to people. We don’t like to be spread out and alone. We come to party – to see and be seen.” And come they do.

The mass of humanity on the beach must be seen to be believed. Every inch of sand is populated by barely clad revellers, all laughing, chatting and dancing like it’s a sun-drenched disco. Salvador’s unique flavour and atmosphere is shaped by its colonial heritage. 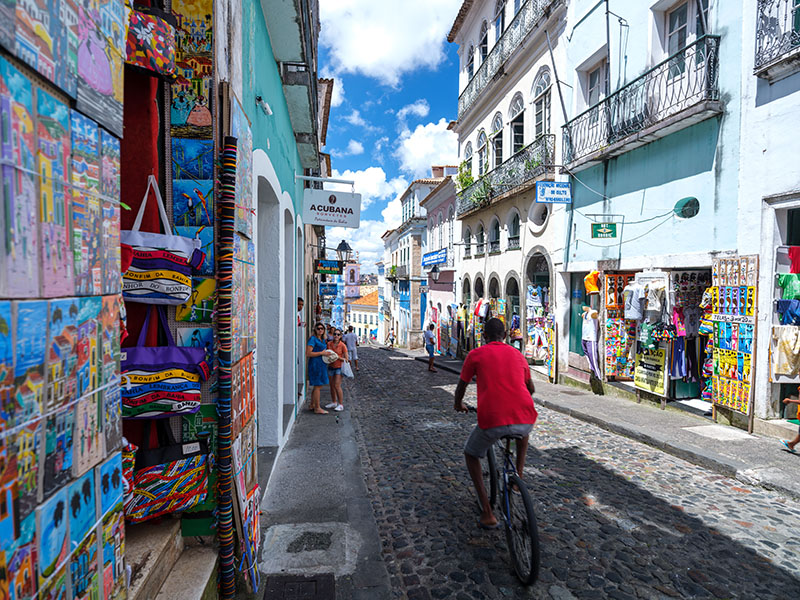 The streets in the historic sector of Pelourinho are lined with colourful buildings and imposing churches and homes that showcase Portuguese architecture from the Baroque period. The historic setting is dramatically animated by the richness of Afro-Brazilian culture, stemming from Salvador’s place of central prominence in Brazil’s historic slave trade.

African descendants make up about 75 per cent of the population of Salvador and so much of the food, spirituality and culture of the modern city is a colourful cocktail of African, native South American and Portuguese heritage. 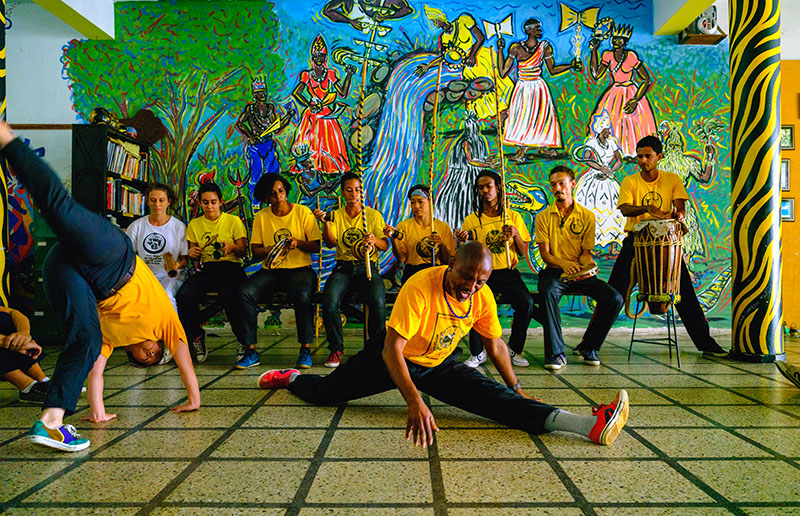 At every turn on almost every street, I am met with a vivid display of dancing and music endemic to this Bahian enclave. Religion is a powerful and prominent part of Salvador life. “Bahians are very religious,” says Gabi. “We are Catholic, and also actively practise Candomblé – our religion is a blend of both.”

Candomblé has its roots in East Africa where traditional beliefs and practices were brought by slaves from the 1500s. The creolisation of ancient African religions in Salvador developed into the modern form of Candomblé that is practised today and, far from being relegated to history, Candomblé is intermingled with all aspects of Salvadorian life including music, dance, food and art. 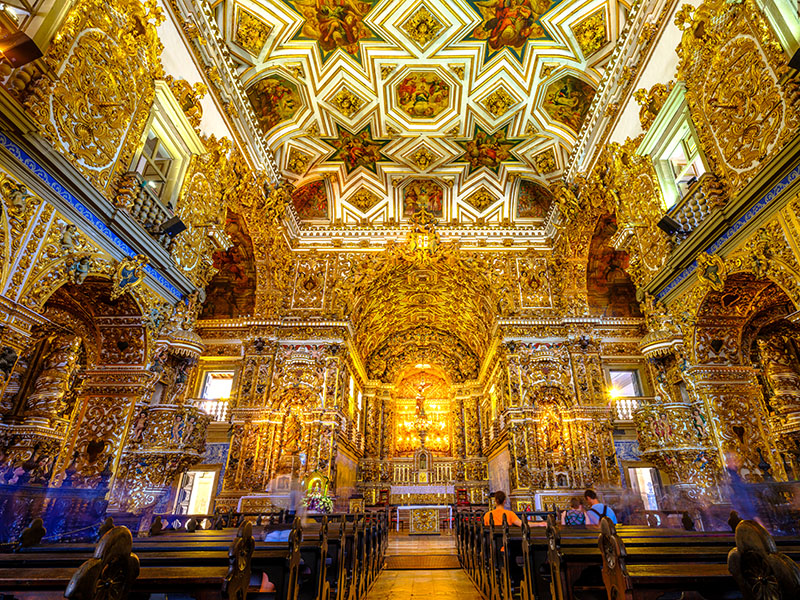 When visiting one of the most famous churches in Salvador; Igreja de Nossa Senhor Do Bonfim, I was amazed to see the Catholic fusion with Candomblé. All of the gates and fences surrounding the Bonfim church were full of Fita de Lembranca; coloured ribbons that mark prayers to each believer’s predestined deity.

Inside the church, a room is full of ‘ex-voto’; symbolic tokens of beseeching, such as wax legs, placed by those seeking relief from a leg injury. All of this while a traditional Catholic service, packed with parishioners, proceeds as it would anywhere else in the world. Religion and tradition have a strong influence on dance and music. 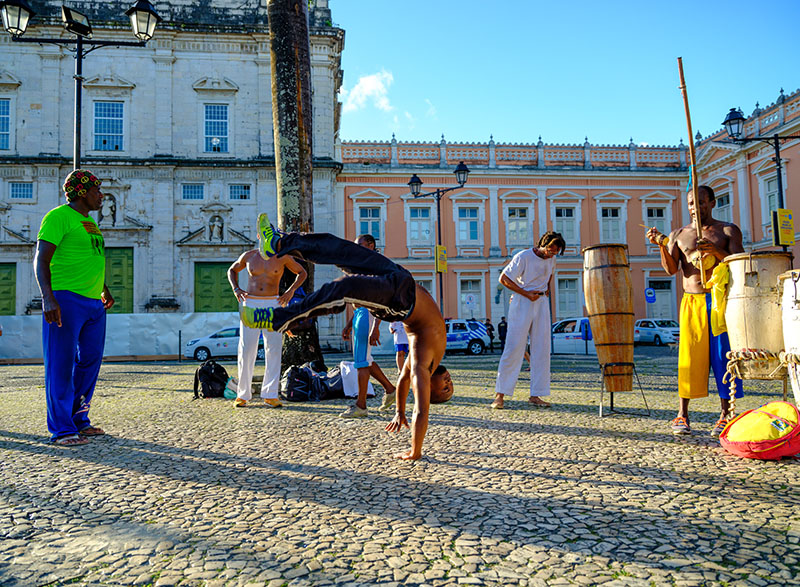 The local martial art, capoeira, is a fighting style of dance that was born of the slave trade and has two distinct forms. Traditional capoeira is akin to tai chi with slow movements engaged by disciplined combatants that move synchronously to traditional rhythmic music.

Modern capoeira is acrobatic and explosive and is an incredible display of power and skill. Typically practised to similar music, this modern style of aerial displays is extremely popular with young men keen to show off their bravado.

“There is another religion here in Bahia,” says Gabi. “That’s football. Our greatest joy is when Brazil beats Argentina.” Local kids grow up playing football and dream of making it to the top. If there isn’t a football around, anything round will do. I happened to be in a Pelourinho neighbourhood on Brazil’s National Children’s Day known as Dia das Crianças. 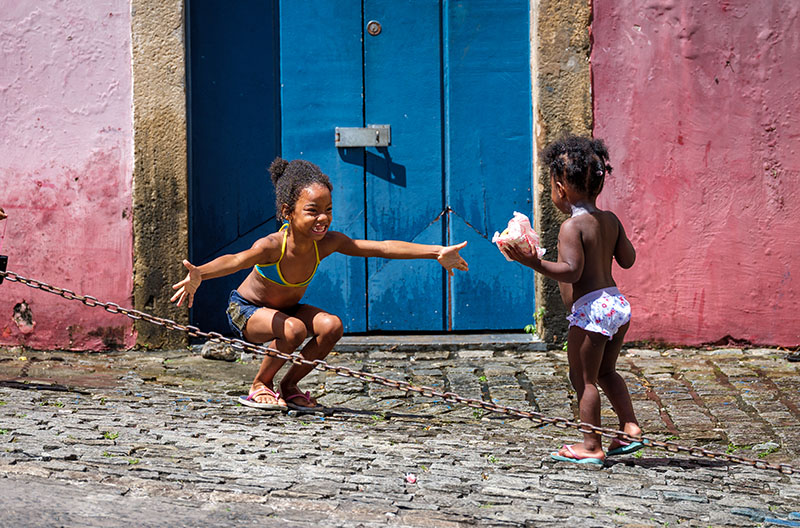 The owners of a local burger joint met up with a group of young kids dancing and playing football in the street and handed out burgers to all of them in keeping with the day’s tradition of gift giving to kids. Bahian regional cuisine is a blend of its African and Portuguese heritage with native Brazilian ingredients and I had the chance to visit a local chef’s home to try my hand at a few dishes.

The central dish is the famous Bahian moqueca. This highly aromatic Brazilian stew is prepared in a large, handmade earthenware pan that resembles a rustic-looking wok. 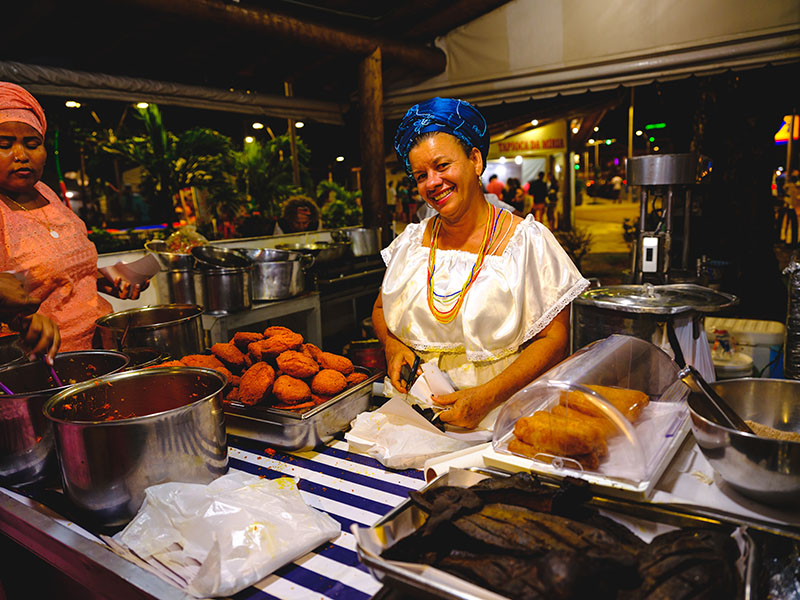 The large, open kitchen was filled with light from a central atrium in the brightly coloured, multi-storey home, which was full of local art and furniture.

Enjoying a local beer while the music was playing (there is always music playing in Salvador), the house filled with the aroma of fresh coriander leaf, garlic, limes, black pepper and onions all sautéing in palm oil.

Coconut and other ingredients from the Mediterranean and Asia that arrived centuries ago in Bahia via Portugal come together in this spicy and deeply satisfying dish. Bahians are fiercely proud of what Salvador has become. 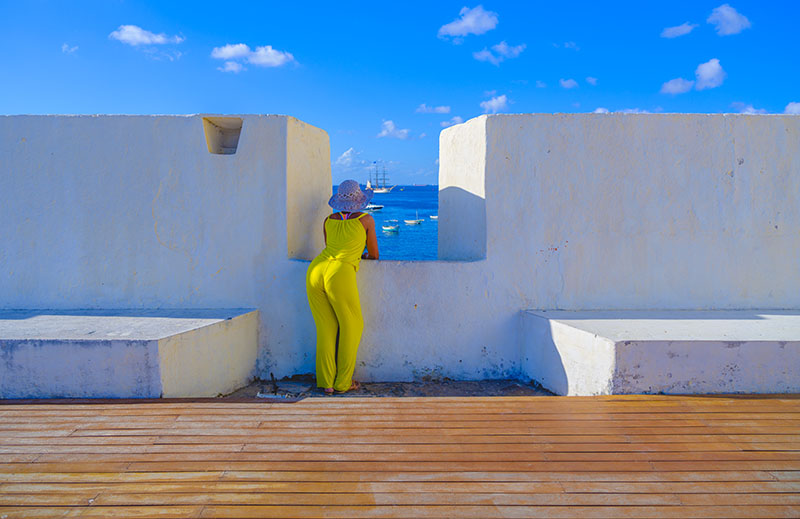 The city is undergoing an enormous regeneration with billions being spent on a project known as the ‘Salvador 360’ restoration to ensure the city remains at the epicentre of culture, investment and commerce. Bahians speak about the future of their capital with hope and anticipation.

Within a few days of soaking up the atmosphere of Salvador, the personality of the place becomes infectious. Salvador is a place to have fun. People are warm and friendly and want visitors to experience the hospitality that Salvador is famous for. 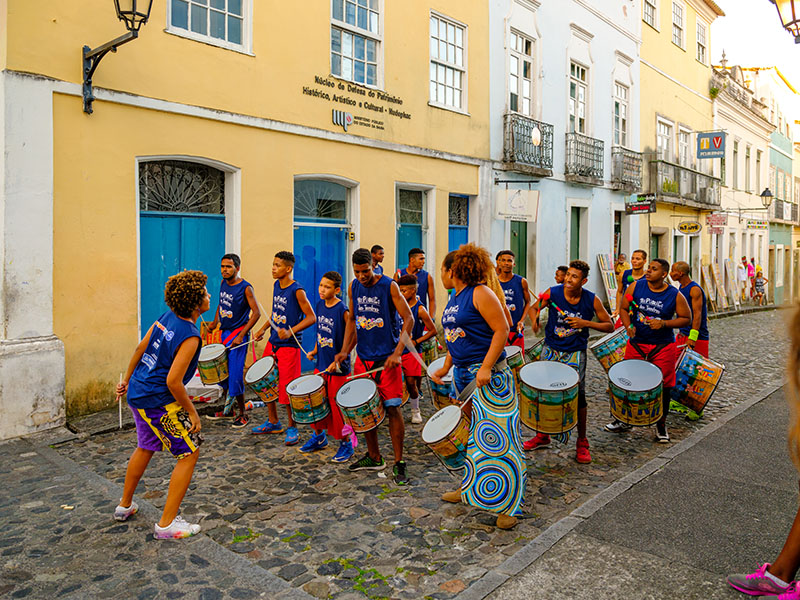 Although religion is central to Salvador life, so are the pleasures of the senses with food, music and sensuality equally prominent. Salvadorans are not shy. This is a city of people that are very comfortable in their own skin and happy to show it off.

The famous Brazilian Carnival flows through the streets for days on end with Brazilians from around the world ensuring me that nowhere is a Carnival done better than in Salvador.

“I danced in the streets for five nights in a row until I couldn’t walk,” says Gabriella Pasqualon, a native of Brazil’s São Paulo. “Every night during the Carnival, up to 2 million people pack the streets to dance and party like nowhere else in the world.” 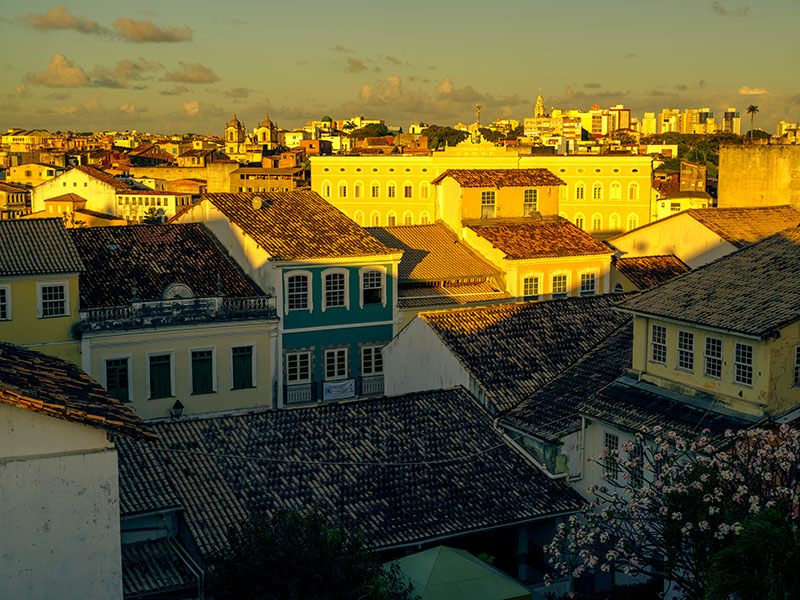 After days of sunshine and fun with the smiling and welcoming Bahians, I settle into my last evening in Salvador with a few new friends and a local favourite cocktail, the caipirinha, made with lime juice and cachaça.

The sugar takes the edge off the lime making these local favourites disappear a little too easily. With a smiling local guitarist filling the small street with sound, I tell my new friends that I wish I could speak better Portuguese.

With a wink, my new drinking buddy quips, “Don’t worry my friend, after three caipirinhas, everyone speaks Portuguese.” It makes perfect sense to me why they call this soul of Brazil, the place of happiness. • 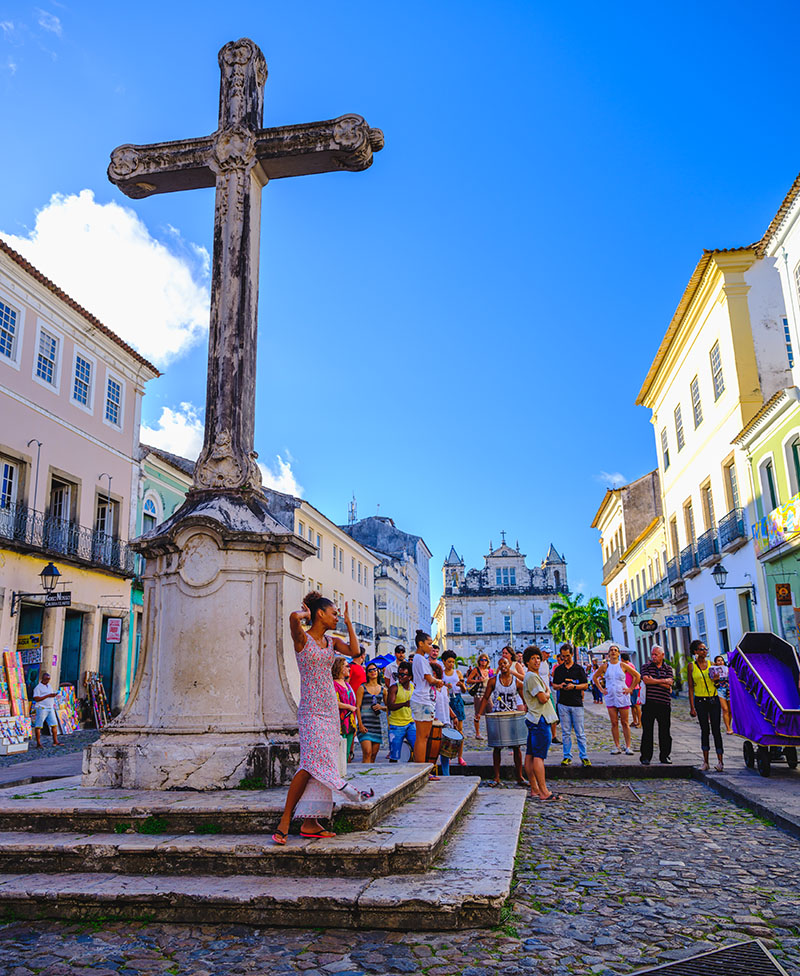 • LATAM Airlines is the leading carrier to and from South America with the largest network and unparalleled connectivity throughout the region. LATAM now operates three non-stop flights from Melbourne to Santiago, Chile, and daily flights from Sydney to Santiago, via Auckland, with onward connections to over 124 destinations.  latam.com

• Peak season is from December to March, but Salvador is beautiful year-round.
• Carnival 2018 is scheduled from 9 to 13 February.

Where To Stay
• Villa Bahia Hotel is in the heart of the heritage area of Pelourinho and faces the cobblestone courtyard in front of the magnificent Igreja e Convento de São Francisco church. en.lavillabahia.com

Further Information
• Adventure World has several tours of Brazil that include Salvador, or choose the four-day ´Discover Salvador´ tour: 1300-295-049; adventureworld.com.au