With so much beauty in so many islands, the best way to discover French Polynesia is by ship. 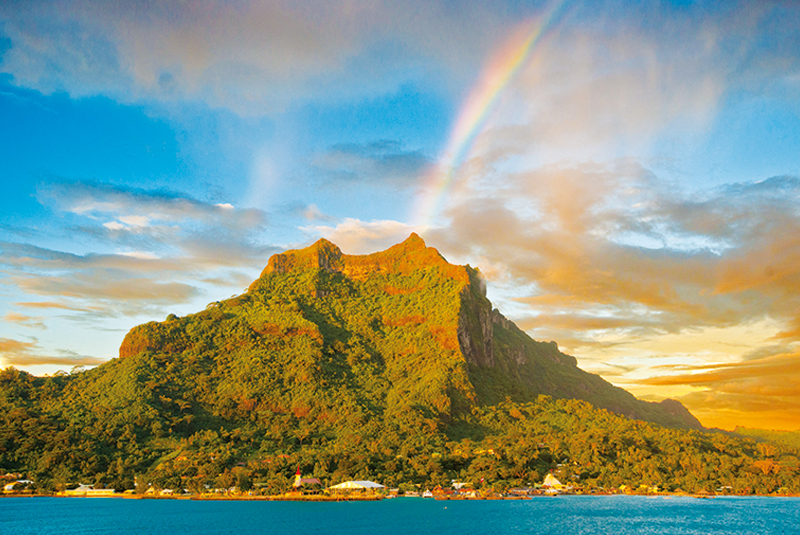 During the Australian winter the lure of the sun-drenched islands of Tahiti and the other islands of French Polynesia is very strong indeed. It’s not just the warmth, nor the beautiful Polynesian people on dazzling island beaches, nor the verdant green mountains rising out of perfect turquoise lagoons. The combination of French chic and laid back island atmosphere makes Tahiti and its neighbours a truly incomparable holiday.

Okay – destination set. But what’s the best way to experience it? Well, the ideal would be to sail your own yacht from Australia and make landfall at Bora Bora. Failing that, you can charter a yacht out of Moorea but these islands are almost defined by their razor-sharp coral reefs so you’ll need to be a skilled sailor – or hire one.

The easiest and most rewarding option for the rest of us is to join a cruise around the islands. Enter the Paul Gauguin, a 332-passenger ship that, as her name suggests, calls French Polynesia home. Consistently rated as one of the best small cruise ships in the world, the Paul Gauguin does a great job of combining luxury and relaxed hospitality into a very beguiling package. It’s also all-inclusive so, once on board, meals (at any dining venue), drinks, tips, entertainment, and some activities are already paid for. She was designed to operate in shallow island waters and has a stern marina deck for aquatic activities.

A staff of 217 provides a crew-to-guest ratio of 1:1.5 and that ensures there’s always someone ready to get you a drink, advise on the next island’s attractions or help fit you with a face mask and snorkel. Les Gauguines and Les Gauguins are entertainers that also help on beach excursions and even instruct in the fine art of coconut cracking and preparing poisson cru.

Even the porthole and window staterooms, the entry level, offer the same L’Occitane toiletries, feather-down duvets, luxurious European linens, 24-hour room service and a refrigerator that’s restocked every day as the owner’s suite. And, of course, everyone shares the same array of restaurants, bars, spa, fitness centre and casino.

However, outside the ship lies the glory of the islands and to fully appreciate them it’s certainly worth having your own balcony or verandah. Indeed, waking up and stepping outside into the warm tropical air to watch the captain manoeuvre the ship into the anchorage for the day is a great start. Conversely, returning to the ship and sitting out on your balcony as the sun sets over the lagoon and mountains is the perfect conclusion to the day. 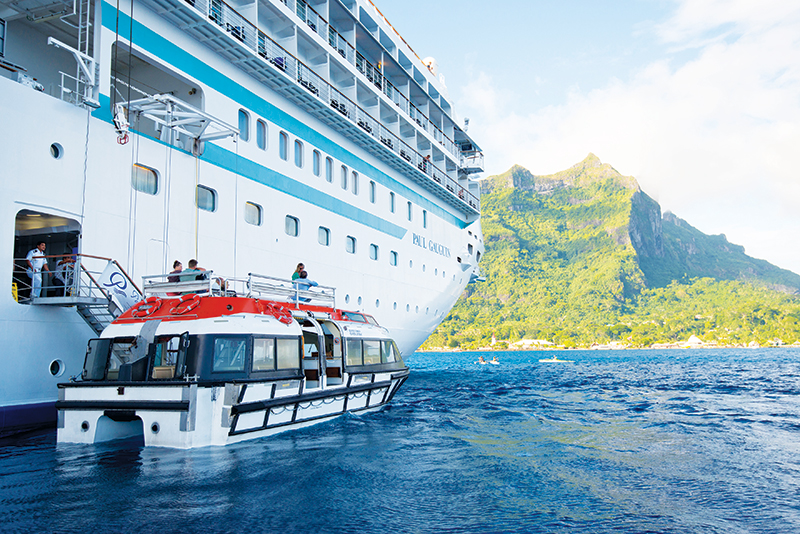 The Paul Gauguin has a range of itineraries and some range as far as Fiji, the Cook Islands and Tonga. Her seven-night itinerary begins and ends in Papeete and sails to Bora Bora and back, with stops at Moorea, Huahine and Taha’a along the way. We opted for the 11-night voyage that also includes the Tuamotus, stopping at Rangiroa, the world’s second largest coral atoll and Fakarava, a stunning UNESCO Nature Reserve.

Although the Tuamotus cover a vast area, the land mass is a mere 775 square kilometres with a population of about 17,000 over 80 islands. Sailing through Passe Garae Nord into the Fakarava lagoon, aiming for the small community of Rotoava, it’s impossible to see the other side of the lagoon. That’s not surprising as the lagoon measures 60km by 25km. Snorkelling at the pinnacle near the pass we are greeted by black-tipped reef sharks, turtles and myriad multi-coloured fish over a very healthy, bright reef.

“Tuamotus” means “distant islands” and therein lies much of their appeal. It’s not only that the pace of life is so slow here that Papeete seems like the big city. But the true advantage is that it takes a while to cruise to and from so you have some time to appreciate the Paul Gauguin. We left Bora Bora at 4pm and didn’t arrive in Rangiroa until noon the next day. Leaving from Fakarava we had a full day at sea before arriving at Taha’a the following morning.

Naturally, the ship had a crowded program to distract us from the fact that we were trapped on the ship, while most of us found it a wonderful day off. Dance lessons, pareo tying and making necklaces were offset with a talk about the intricacies of Polynesian tattooing. The spa was heavily booked and most of us turned up for the post-dinner show and pre-dinner cocktails.

The Paul Gauguin has a culinary relationship with de Apicius, Jean-Pierre Vigato’s renowned restaurant in Paris and we were fortunate that Roman, a chef from the restaurant, was on board for this voyage and he shared some of his cooking techniques. Indeed, one night in La Veranda Restaurant we were offered a special menu from Apicius that extended from a foie gras with port wine reduction through grilled wahoo, bell peppers with green onions Napoleon to chocolate and passionfruit mille feuille. 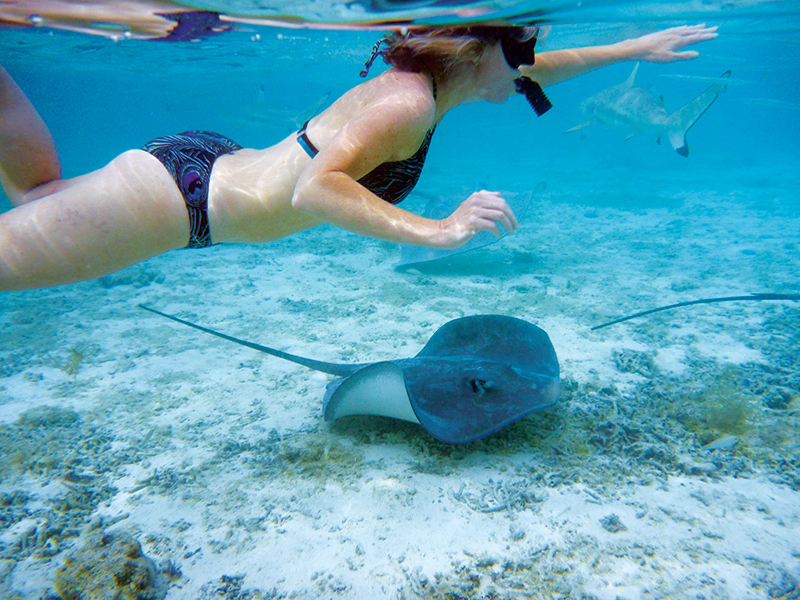 L’Etoile, the main dining room is open for dinner only and each one is an event. Meanwhile, the casual Le Grill offers a more avant garde menu in the evening (after serving indoor/outdoor breakfasts and lunch). It provided one of our most memorable dishes: a pumpkin ravioli with cinnamon and nutmeg, with a ginger cream with truffle oil.

While the entertainers of the Paul Gauguin were a step up from many on other ships, one stood out. Gustavo Vierini is a young Brazilian magician with a great stage show. But he would also wander the tables in the ship’s Piano Bar, performing impromptu tricks that were simply inexplicable.

The main otherworldly wonder was the procession of islands as the days passed. Bora Bora is perfect with the rugged volcanic plug of Mt Otemanu rising above the jungle while the blue lagoon lies like a surrounding petticoat. Taha’a is the vanilla island and we returned home with enough vanilla pods to invoke Tahiti for months to come. Huahine has many ancient marae to understand, mountain paths to explore, and some blue-eyed eels waiting to greet visitors. Moorea is a big island with a rich interior and spinner dolphins in the lagoon.

Our voyage was long enough that we fell into a pattern. Some days we’d endeavour to see and do everything the island had to offer. On others we’d leave the ship with just swimsuits, masks and snorkels and rent bicycles. Somewhere along the coast we’d find a beguiling beach that warranted a swim. Salty and happy we’d find a local café for lunch then cycle back to the ship.

There are no direct flights from Australia to Papeete but there are several from Auckland. So you can fly on Qantas, code sharing with Air Tahiti Nui, or vice versa, or fly there with Air New Zealand.
•    Qantas: qantas.com.au
•    Air Tahiti Nui: airtahitinui.com/au-en
•    Air New Zealand: airnewzealand.com.au

Getting Around
•    Paul Gauguin Cruises in Australia is well represented by Wiltrans International: wiltrans.com.au
•    While travel between the islands is comfortable aboard the Paul Gauguin, you have a few transport options at each destination. The easiest one is to book any of the wide range of excursions that the ship offers. But if you wish to go it alone you can rent a car or bicycle on most islands or a motor scooter on several of them. Make sure you have your drivers licence with you. Often a bicycle is all you need.
•    On Bora Bora you can rent a small motorboat. It’s a great way to explore the lagoon. If you don’t have a boat licence you’ll find your boat is chronically underpowered. With a licence you can rent one that zips around. The company will pick you up from the ship’s dock. laplage-borabora.com

When to Go
As a general rule, it’s warm and humid in French Polynesia between November and April and cool and dry the rest of the year. “Cool” is still around 20°C-22°C. December and January are the wettest months in the Society Islands.

Where to Stay
The InterContinental Tahiti Resort and Spa is a great beachside resort not far from Papeete Airport. The view of the sunset over Moorea is glorious – and so is the restaurant’s platter of three different crème brûlée. There’s a shuttle bus into town and the hotel is part of the Paul Gauguin’s hotel program. It’s also only a short walk to a large shopping centre that offers the cheapest vanilla extract and Monoi oil deals in French Polynesia. intercontinental.com