Step on board the most luxurious train in Africa for a cross-country odyssey through South Africa’s Great Karoo. 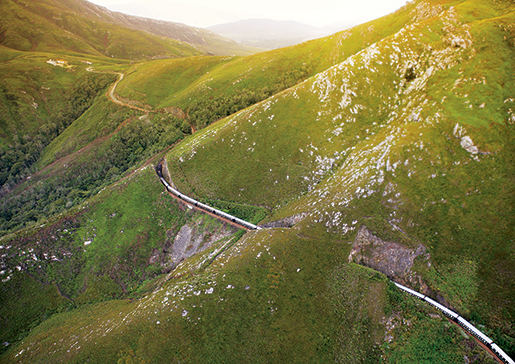 The shaking bed stirred me from my sleep as the wood-panelled compartment pitched and rolled as if on a stormy sea. In the well-stocked mini-bar crystal champagne glasses tinkled like a boozy wind chime. Earthquake, I wondered?

Until the screech of wheel on track reminds me I’m in a train carriage built half a century ago, barrelling through the semi-desert that dominates the heartland of South Africa. I drop the blinds and watch the electricity poles tick off the long kilometres to Cape Town. It’s my last night on Rovos Rail, and I’m happy to trade a little sleep for the starlit silence of the Great Karoo.

It’s a rare visitor to South Africa that doesn’t combine the wild beauty of the bushveld with the coastal charms of Cape Town. You can swop seeing the Big Five in the bush for fine dining in the winelands with just a two-hour flight. Except there’s a far better way to do it, which is how I find myself strolling along the platform at Rovos Rail’s Capital Park Station in Pretoria on a warm spring afternoon.

Since 1989 Rovos Rail has grown from the quirky hobby of owner Rohan Vos to one of the icons of luxury travel in Africa. The first departure had just four paying passengers on board, while today Rovos runs dozens of immaculately restored carriages, often saved from abandoned sidings and refitted in the vintage-luxury style that has become the hallmark of this family-owned business. 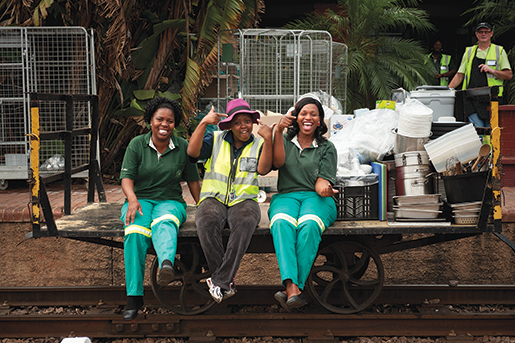 Rohan is normally on the platform to see passengers off, but today it’s daughter Brenda that introduces the train staff and waves us on our way. Train stewards, at our beck and call for the duration of the journey, show us to our carriage and explain the inner workings of the compact double or twin compartments. All have en-suite facilities with showers, while the top-drawer Royal Suites boast freestanding Victorian baths.

With its smoking lounge and brass name-plates, monogrammed writing paper and floral bedspreads, Rovos Rail is a flashback to the early decades of the 20th-century: to when travel was glamorous, not a grind. From the bow-tied barman to the discreet dinner gong, Edwardian charm all but seeps out of the woodwork. Downton Abbey on wheels? It’s not far off.

On board, there’s a careful balance of olde-world charm and modernity: air-conditioners come standard, yet televisions are forbidden. Wi-Fi? Forget it, and guests are asked to keep their mobile phones out of public areas. There are few complaints, and most passengers are only too happy to wave goodbye to their Blackberry or iPhone for a few days.

As our train jolts into motion, heads hang out the windows – goggles are thoughtfully provided – as ‘King Zog’ puffs and rumbles to life. Vos keeps a number of vintage steam locomotives in working order, with each named for a member of the family. King Zog is his dog.

However, with coal and water in short supply on the 1600-kilometre run down to Cape Town we quickly switch to an electric locomotive and point our nose south. I unpack, hang up my jacket for dinner, and head to the bar and lounge carriage at the back of the train. It becomes a home-from-home for much of the journey, with the dual benefits of an open-air deck and a well-stocked bar. Barman Joe Mathala is doing a brisk business in stiff G&Ts as we leave Pretoria in the afternoon haze.

Pretoria to Cape Town is the flagship route for Rovos Rail, but there are also regular departures to Durban, via the scenic Drakensberg Mountains and historic battlefields of KwaZulu-Natal. The three-night run north to Victoria Falls is justifiably popular, as are seasonal itineraries to Namibia. Travellers with particularly deep pockets can consider the two-week odyssey to Dar es Salaam in Tanzania.

Our first hours out of Pretoria aren’t particularly attractive, traversing commuter lines as the train skirts the southern rump of Johannesburg. While the city is enjoying a long-awaited gentrification, from the train it’s an uninspiring vista of industrial parks and urban townships.

The following morning all is forgiven, as the wide-open landscapes of the Highveld give way to russet grasslands and endless fields. Across the Vaal River century-old bridges mark historic battles, while the waters of Kamfers Dam outside Kimberley are tinged a lustrous pink by thousands of endangered Lesser Flamingos.

Kimberley is the first of two off-train excursions on the journey south, a chance to stretch your legs and soak up a little local history. The Big Hole may not sound like much of an attraction, but what was once an unremarkable flat-topped mountain is today one of the world’s largest hand-dug excavations: a 214-metre-deep crater that yielded nearly three tonnes of diamonds between 1871 and 1914. The wealth extracted here made some of South Africa’s first fortunes.

Today a modern visitor centre overlooks the old mine workings, and entertaining local guides bring the diamond-rush days to life. After a wander through the new Diamond Museum, done up as an old-style mining village, it is back to the train for lunch on the rails as we head into the Great Karoo. 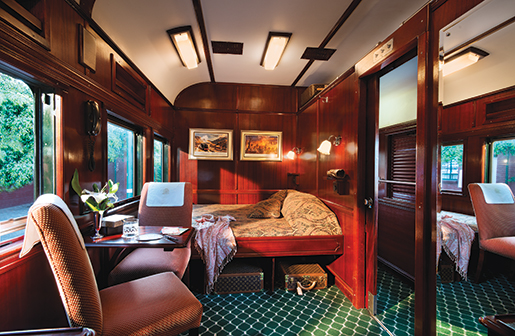 Meals on Rovos are a highlight of the journey, segmenting the days with fine South African cuisine served in the vintage dining cars. From a miniscule moving kitchen the brigade of chefs conjure up an impressive array of locally-inspired dishes. Expect the likes of seared rock lobster, pan-fried Karoo lamb, springbok loin and traditional South African bobotie. The wine-list is equally impressive, showcasing iconic producers of the Cape winelands as well as boutique estates pioneering new vineyard plantings. Fares are all-inclusive, so there’s little reason not to indulge.

The afternoon disappears in a blur of expansive Karoo scenery, before guests wander back to their compartments to prepare for dinner. While the dress code and ambience on the train is smart-casual during the daytime, evenings are formal and dressing for dinner is expected. Jacket-and-tie is a minimum requirement for gentlemen and while there’s no need to pack your tuxedo, you won’t look out of place if you do.

After a night of lightning storms and rattling carriages the morning sees the Cape mountains poking through the morning haze, a dusting of snow on the high peaks of the Matroosberg. The day’s excursion is the quaint Victorian village of Matjiesfontein, where a handful of quirky country museums keep passengers entertained for an hour or two.

Then it’s back on board for the final, and most scenic, leg of the trip: past the craggy Hex River Mountains and into the fertile Breede River valley and the Cape winelands where vineyards carpet the landscape in neat rows. Vines give way to emerald wheat fields as the train rounds the Tulbagh Mountains and runs for Cape Town.

Just as the earliest sailors would have seen, Table Mountain looms on the horizon with welcoming arms of sandstone. Cape Town Station and the end of the journey awaits, yet I find myself wishing I could turn the train around and do it all again. As if on cue, Joe appears. There’s just enough time for one last G&T… •

Extend your stay in Cape Town with a few nights at Rovos Rail’s stately St. James Guesthouses. The guesthouse offers easy access to local beaches and restaurants, and is a 25-minute drive from the city centre. +27-21/788-4543; stjamesguesthouses.com

Closer to the city, Taj Cape Town occupies a prime position in the heart of the central business district; close to galleries, shops and restaurants. The 10 Heritage Suites are the best in the house. +27-21/819-2000; tajcapetown.co.za

There’s no bad time to make the journey from Pretoria to Cape Town, which has a Mediterranean climate similar to Melbourne: expect warm to hot summers and wet, cold winters. Go in summer if you want to spend some time on the beaches, winter for whale watching near Hermanus (two hours’ drive from Cape Town), and spring for the annual flower displays up the West Coast. The trip from Pretoria to Victoria Falls is best from February to April, when the Zambezi is in full flood.
Further Information